So.  You  go away for a few days and when you come back half the internal walls in your house are gone.  You’ve got no bathroom, no kitchen, no heating, barely any ceiling and  the only running water is a hosepipe sticking out of the middle of a concrete floor.  The one safe, semi-liveable-in room is your bedroom but even here every available inch of floorspace is filled with refugee clutter from other parts of the house; piled high to the ceiling.  And all is covered in a fine layer of plaster dust.  Bedsheets included.   What would you do?   We (because we’re rufty tufty types) stuck it out for a couple of grim, long days.   And then?   We ran away.   Packed what we could and   fled, shrieking, to family in Gloucestershire.  We planned to return when the house was a little more habitable.  A flushing loo would be an inducement.Hence the lack of recent posts ….I think I was pretty realistic about eight days walking around the Yorkshire moors in March.  And until someone mentioned “An  American  Werewolf In London” (“Stay on the road. Keep clear of the moors. Beware the moon”)  I hadn’t even thought of werewolves.  So being reminded was great.  Thanks Mark.

North Yorkshire in March?  You’d pack some serious waterproofs wouldn’t you?  And gloves?   And a fleece and plenty of thick socks?  A nice warm hat?  Exposure bag, whistle, torch, half a dozen bottles of Spitfire ale, eight family size bags of Revels – all the usual emergency kit, in case I got caught in a snow drift.  But then miraculously, amazingly, wonderfully, beautifully the sun shone.

And shone and shone and shone.  Don’t you just love it when that happens?  The one thing I really needed in my emergency survival kit was sunblock.  But it being the North Yorkshire Moors in March, I hadn’t packed any.  Burn David, burn.

So I ended up lugging all this other stuff for mile after mile. Stuff. Just loads and loads of  redundant stuff. Really heavy stuff.   Soon my hip joints hurt and my knee joints hurt.  And  my  feet hurt – big time.  At the end of my first day, I shuffled into my first pit stop (the very pretty village of Levisham) like a weary, second rate specimen of the Walking Dead. Spit bubbles on my cracked lips and murmuring, barely audibly, “pity me, pity me.”

After that first day, I figured I’d have to walk quickly (blisters be damned) if I were to keep to my fairly punishing schedule.  So I might not  have time

to stop, linger and admire any  ruined castles rising out of the morning mist,

or a beautiful abbey with attendant posing cattle

or an 150 year old brick viaduct as stunning today as the day it was built.  Brick!

I wanted to see some  good old fashioned English place-names

reeking of an Anglo-Saxon/Norman/Viking past.

And I wanted to be  enticed by a pretty path.  Or two;

to see a coquettish path that tweaked my curious nose and tugged me along, Aunt Polly like, by the ear lobe.

I thought I’d see plenty of wildlife, hopefully something  I hadn’t seen  before

and hopefully something with stick-on comedy eyebrows.  Unlikely.

Before I set off, I imagined endless trudging along brooding, treacherous and stormy cliffs,

my head cowered by the gale that I marched ever so stoically (and very, very bravely) into. 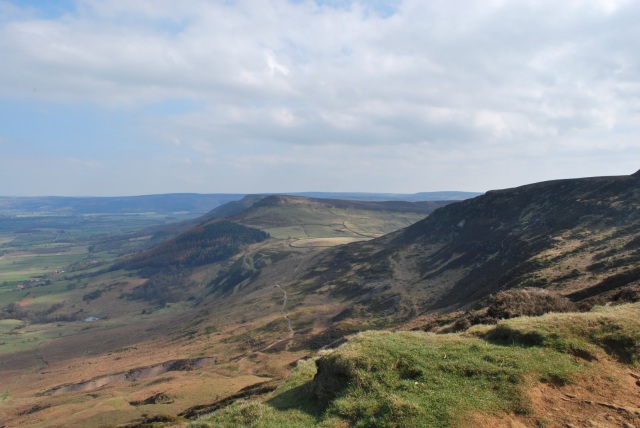 Stomp, stomp, stomp across the moors, dodging rain squalls with hailstones the size of tennis balls careering about my ears.

or a whiff of the mystical, the magical.

I hoped not to see a soul. Not one.  I wanted complete solitude.  And yet, one day, I saw THIS man.

But I did want to see some pretty flowers, and maybe, just maybe, a levitating ball  of exploding gorse.   Result!

And something unfamiliar, at least to my eye.  Something microcosmic.  (There you go, Stacy).

And  a vista. I wanted to snap a nice big vista without some grinning Herbert sidling into frame uninvited.  And waving.

What I did get was an eight day walk in North Yorkshire.  And it was amazing.  I know that is an overused and consequently impoverished word.  But it was.  Amazing.  And very beautiful.  And very long.

9 thoughts on “And Back Again”