and I just can’t hide it,
I’m about to lose control
and I think I like it”

So now I know what the Pointer Sisters were so excited about.  Like me, they’d obviously realised that their Crambe cordifolia was about to flower for the first time.  I planted mine out last year, hoping against hope that it would flower then.  But it just sat there for weeks and weeks on end like a great, big sulky cabbage.  But this year, this year – oh yes.  Oh yes.  This year it’s going to do it.   I’m so excited.
Thanks to my good friend Andrew for introducing me to this spectacular plant a few years back.  We were walking through his garden of loveliness and I was brought to a halt by an enormous froth of flower.  In my face.  Imagine. Spellbinding and a serious must-have – if you’ve got the room.

There’s so much flowering at the Priory at the moment that I can’t possibly photograph it all (and do any work).

Though I have tried to capture a little of what’s happening.

In the long border, the alliums have taken over show-off duties from the tulips 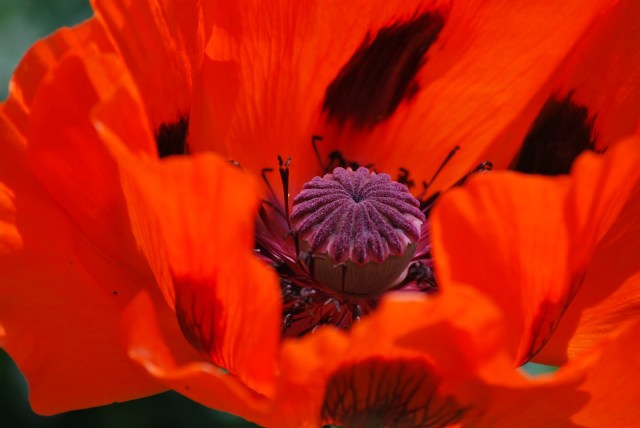 and over in the kidney beds the Oriental poppies are putting on their blink-and-you’ll-miss-it-show.  There are two there that survived the-years-of-neglect though I have twelve young Papaver bracteatum that I have grown from seed.  Should be able to plant these out soon and they’ll flower next year.

In the past week or so, I’ve planted a further three clematis taking the number in the garden up to about fifteen.  Here is Clematis westerplatte planted last year.

I’ve been simplifying some of the beds and moving plants around. Verbena bonariensis, for example has now been removed completely from one bed up against the house and replanted  into a new bed to augment some grasses.  Verbena bonariensis is a great plant but in a frantic effort to fill up empty spaces when I first started work at the priory,  I stuffed it pretty much everywhere.  And you can have too much of a good thing.  I had loads of extra plants from my own garden as it self seeds generously.  Sarah Raven, in her seed catalogue, states that it “gently self seeds”.  I think that that is rather (gently) understating its quiet determination to take over the world.

The flower meadow is beginning to look a little more like a meadow and a little less like a lawn that some good-for-nothing-gardener (ahem) can’t be bothered to mow properly.

I mow the paths through the longer meadow grass and flowers once a week using my beloved Hayter mower.  I do all the lawns with the Hayter.  It cuts all  stoically and without a fuss; level ground, rough ground and gives a great stripey effect to boot.  I can spend quite a lot of time quietly gazing at my Hayter.  Tapping a finger against my leg. Quite a long time indeed. 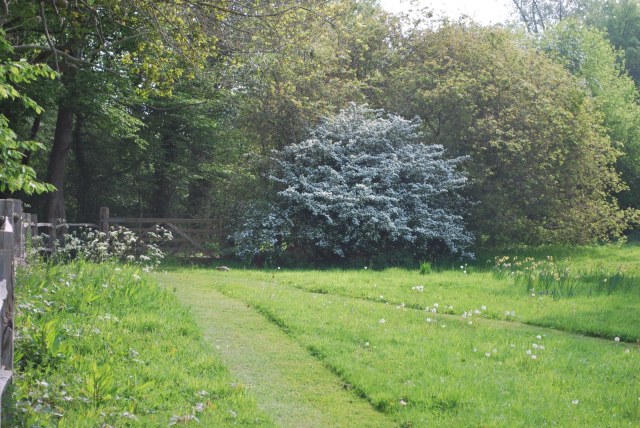 Anyhow, let’s move on.  Hot on the heels of the blackthorn blossom comes the hawthorn blossom or Mayflower; it’s just about in full spate.
There are ten fruit trees planted in the meadow.  I put them in the year before last but they’re still pretty small.  There are four apple, two plum, two pear, one cherry and a quince.  And I do wish they’d get a move on.  Along with an already planted hornbeam they form a large ‘S’ along the length of the meadow.  The only time, to my knowledge, that deer got into the gardens they wreaked havoc amongst these young trees.  One, an Opal plum, was completely destroyed and had to be replaced and three others, the quince, the cherry and a Victoria plum, were all badly damaged.  The morning that I arrived at work and saw the devastation of  shredded branches, flayed stems and strips of bark flapping in the breeze was the only time in my life that my sympathy lay with the hunter rather than for Bambi or his Mum.  The garden is by no means deer proof but we now have post-and-rail fencing along the top of the steep river bank (see above, left) and I think the extra height has deterred them from returning via that route – at least.  Though they could easily enter in other parts of the garden.
In an effort to deter them, I wire protected each of the young fruit trees for eighteen months or more.  But without sign of the deer returning and tiring of the ugliness of my wire tree coops, they’ve now been removed. 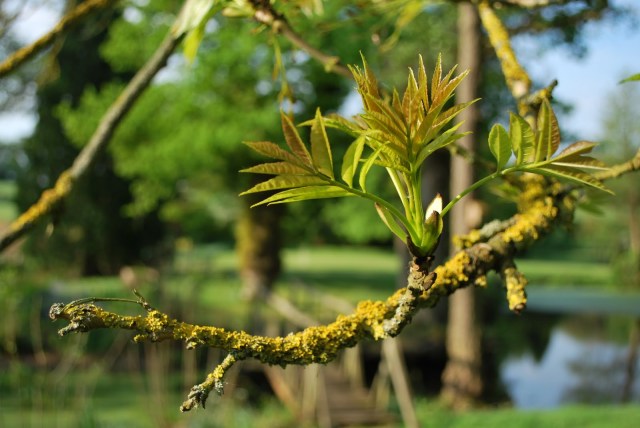 Occasionally, as I skip about the garden, something catches my eye that hasn’t got a big blousy flower or heady scent.  Just a simple beauty that stops me in my tracks.  I think the ash is a really underrated tree.  Handsome grey bark, handsome cut leaves and a tall, stately handsomeness.  So quite handsome then, really.

The reed mace is seeding freely and it’s latent young carried off by the wind. I fear I’m going to be clearing a lot of reed mace (and the spearwort I introduced) later in the year. 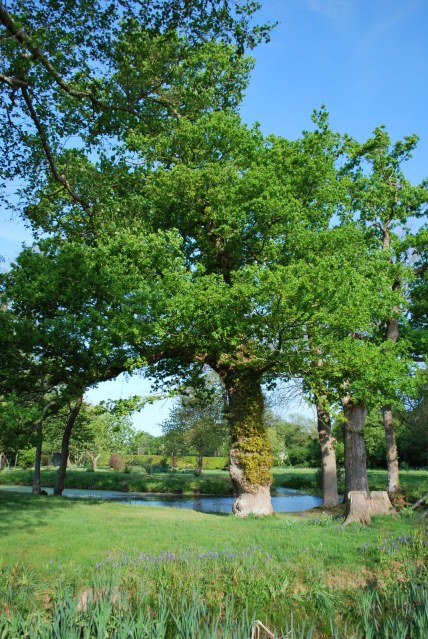 The old oak on the east pond has donned his fustian summer coat.  The swellings or burrs on the trunk are the result of repeated attempts by the tree to grow side branches.  These side branches die but the tree keeps on trying and over time the trunk swells.  Someone told me that cattle rubbing against the side of trees can cause the effect though it’d have to have been a flipping great beast to have caused the ones above. 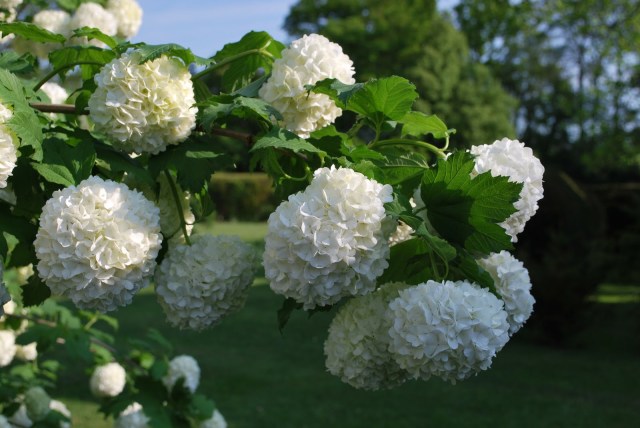 Viburnum roseum over on the west lawn is putting on its way over the top spring display.  Very cheery though and well appreciated. 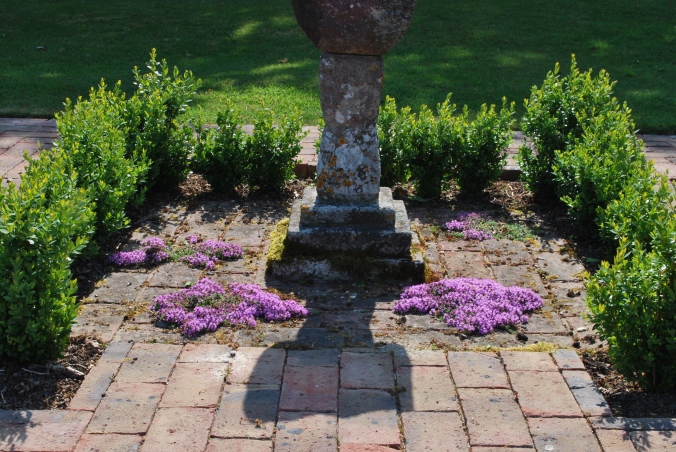 About the base of this old bird bath, I’ve planted a small box hedge and creeping thyme in the planting spaces in the paving.  Hoping that this year I’ll be able to give the box a little shape and form when I come to trim it.  It got ferociously attacked by rabbits when it first went in.  The garden is now rabbit free and rabbit proof so it’s coming along nicely. 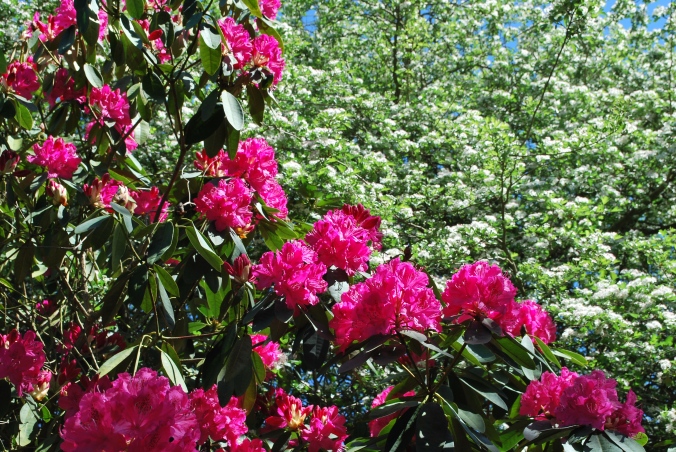 I used to staunchly dislike rhododendron but have softened my stance on them and now welcome their great show at this time of year.  And that show is all the better this year as, unusually, it coincides with the hawthorn as a backdrop.

I couldn’t have dreamed up such a combination and I wonder whether I’ll see it again at the Priory.  Gaudy?  No doubt.  Too much?  Probably.  Do I like it?  Yep.

And so do the bees.