April is a busy month for gardeners and the sheer amount of flower can be a little distracting.  Plants are elbowing through to the fore, hurling themselves into flower and screeching, “Me, me, me.  Look at me!”  And very pretty it all is too but I do wish (a little) that they would just calm down a bit.  I find myself whispering, “Very nice, but just take it easy, OK.  Slow down pal, slow down; there’s plenty of time.”  As distracting as it is, I want the show to run and run.

But realising that they won’t take a blind bit of notice, I continue to edge and dig, mow and plant; all the while taking time to enjoy the spectacle.  Even plants that I wouldn’t have planted myself, such as …

Forsythia in bloom. A neighbour's cottage at The Old Forge.

… forsythia, are looking mighty fine in this, their lime-light moment. 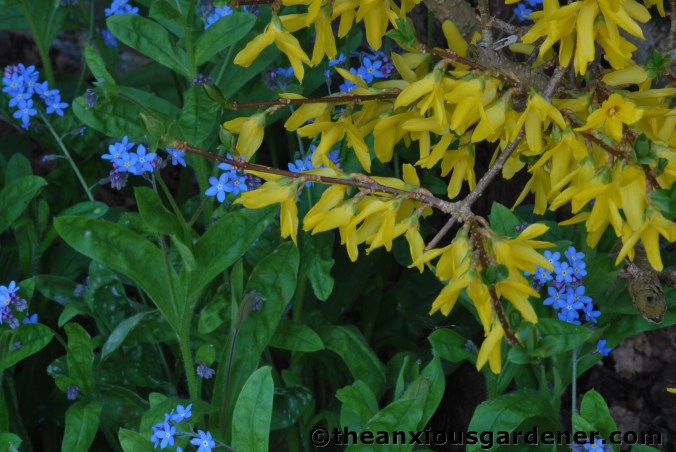 There is a forsythia up against the house and under a window at the Priory.  Seems an odd place to plant one as, once the main event is over,  it is a dull shrub.  But, with an underplanting of forget-me-nots, I have no plans to remove it.  Yet.

Something I would have planted (had there not already been one) is Magnolia stellata.  Such perfection is rare on this particular little tree but the absence of late, hard frosts this year has left the delicate blooms unblemished.

I must stress that, actually, I have planted some stuff myself (this is important; it’s my job).  Here Tulipa bakeri ‘Lilac Wonder’ flowers against a backdrop of fresh crocosmia leaves.

Primula denticulata with the first Peacock butterfly of the year - 28 March.

And beneath a young fig tree, a clutch of primulas attract an early visitor; always gratifying that I have helped to attract wildlife.

But as much as I would like to claim credit for all the beauty in the gardens, sadly, I can’t.  One of my favourite areas of the Priory is a bank, running down from the greenhouse to a drainage ditch. 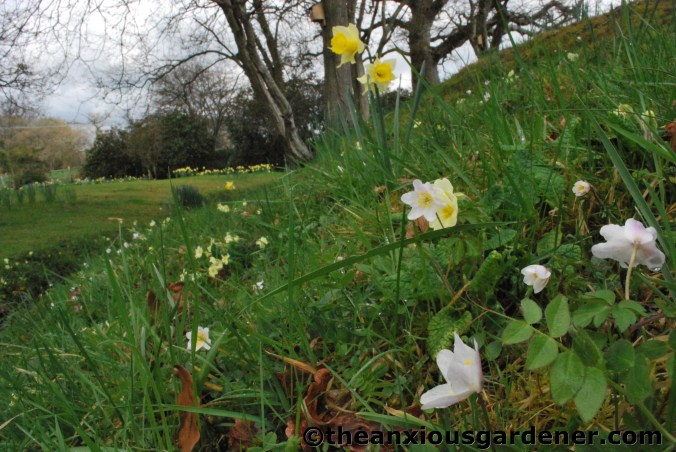 I strim it once or twice a year but certainly not in Spring when, after the crocuses are over,  it is speckled with primroses, the odd daffodil, wood anemones and cuckoo flowers.

Here forming a carpet (or at least a rug) in the wild-flower meadow,

here popping up in the lawn and …

… here self-seeding themselves into places they really shouldn’t.  But, bad as such behaviour is, I can’t always bring myself to root them out.

Usually I’m unimpressed with pink but, while I still prefer the common yellow primrose, I do rather like some of the variations; such as this one.

Even more widespread than the primulas are wild violets (Viola odorata).  A visitor to the gardens was really quite excited when she noticed the white form …

… as she thought them quite rare (though a quick internet search seems to dispute this).  The white violas don’t mix with their common-or-garden cousins; remaining haughtily separate and aloof.  We have several patches of them along the drive and by the river-bank.

The Cuckoo Flower or Lady’s Smock (Cardamine pratensis) is common in these ‘ere parts, lining hedgerows and field margins, and is now spreading into the meadow; which pleased me no end.

Under three large oak trees, on the east lawn, is another area of grass which I leave uncut until the autumn.  Chiefly because later in the summer it is home to a small colony of …

… because of a growing spread of bluebells and … 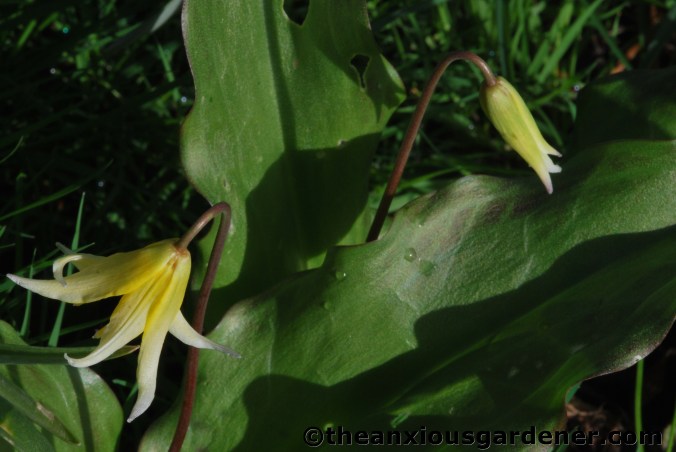 … a little something extra that I have added:  Dog’s Tooth Violets (so-called because of the shape of their bulbs).  I have planted three different varieties but only this one, Erythronium pagoda, has deigned to flower.  The un-mown grass is also home to a steadily increasing number of wood anemones (Anemone nemorosa).

I’d like to say that their gentle, perfect spacing is down to me.   But that would be a lie.  I know how tricky naturalised planting is to achieve and it doesn’t come any better than this; careful where you tread.

I first noticed wood anemones as a twenty-one year old visiting Rievaulx Abbey in Yorkshire.  Coming from the city, I had no idea what it was but, thinking it gorgeous, plucked one to press within my angsty journal – for later identification.  Now almost thirty years later, the pressed flower is still in my angsty journal and, remarkably, perfectly preserved.

Up on the drive, where it passes through Margaret’s wood, anemones grow much more abundantly.  They have erupted in number since the  trees were thinned a couple of years ago and sunlight now washes the woodland floor. 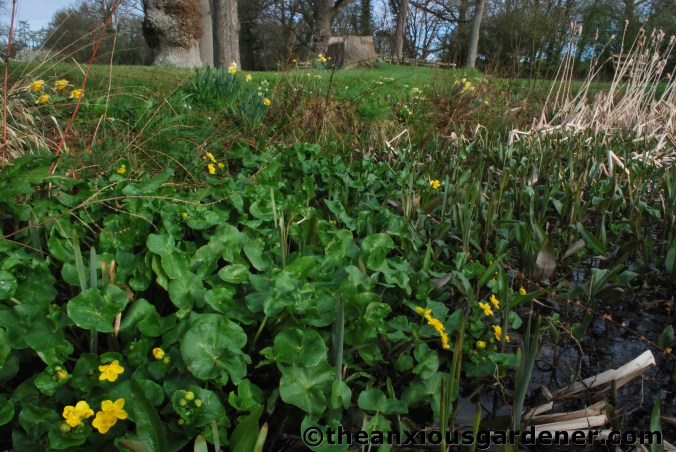 In the water margins of the gardens, I have added Kingcup (or Water Marigolds if you prefer; either way: Caltha palutris) and, unsurprisingly in this perfect habitat,  it is thriving.

Another Marsden introduction (and mentioned in a recent post) are Fritillaria meleagris.  I boasted then that there were hundreds of this handsome charmer dancing across the meadow … but only posted photos of single flowers.  So were proof needed …

Lesser Celandine (Ranunculus ficaria) is endemic at the Priory and (very annoyingly) infests some of the formal borders.  But here in the meadow, it may do as it likes – and does.

Nearby is a swathe of wild flowers that, were they not already well established, I certainly would have planted.  Along the river bank, on either side of the post and rail, is a heady, salami-scented expanse of Ramsons or Wild garlic (Allium ursinum).

So far only one or two have flowered but … 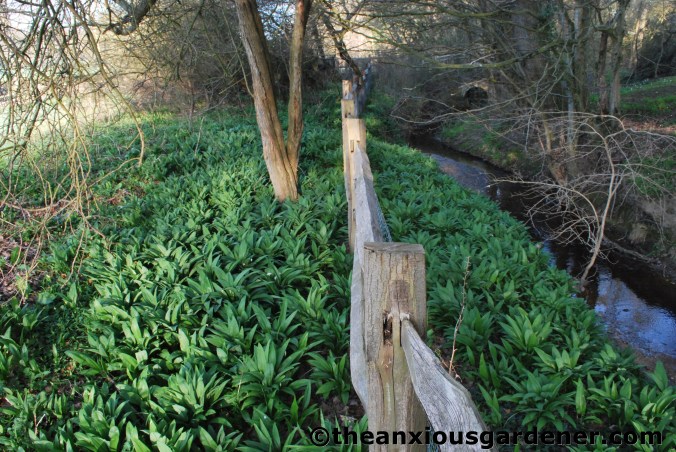 … when they all do, it is quite a sight.  And smell.  The sight I’ll share, in due course. The smell?  Er, garlicky.  Go sniff a salami; you’ll get the idea.

Prunus spinosa not yet in full spate.

And providing the shade that Ramsons love?  A large bank of Blackthorn (Prunus spinosa).  I certainly didn’t plant this but I did save it from being felled.  The chap who put in the post and rail fencing wanted to clear it (would’ve made his job much easier).  But I fought its corner and the thicket was reprieved.   I’ve been delaying publishing this post for a few days now, as I wanted to show you the Blackthorn at full throttle; unfortunately though, that is still a few days off and (as a good friend has just pointed out) it has been a while since I last posted.  So …

Looking over Apeldoorn tulips to the Blackthorn. April 2011.

… we must make do with this photo from last year.   It is a magnificent, completely over the top, distracting performance – which I love and never tire of.  I’m so glad it wasn’t chain-sawed.  Aren’t you?