I started growing aconitum after seeing it in a neighbour’s border.  I was nosing over the garden wall (a favourite past-time) and asked Mary about her tall plant with the striking flowers.  She told me its common name, monkshood, and that she grew it as a substitute for delphiniums – which, after unrelenting slug slaughter, she had abandoned in disgust.

Aconitum napellus is similar in height to delphinium but flowers later (mine don’t get going until September/October).  It is happy in dry shade and, as Mary said, untroubled by molluscs.  I like the slightly sinister, dark-blue flowers.  They remind me of a boyhood dream: a cowled, faceless monk flitting from one dark tree to the next, but coming ever closer.  (Why I should want reminding of that particular nightmare is any psychoanalyst’s guess).

I knew monkshood was poisonous when I introduced it to the Priory but I wasn’t particularly concerned: foxglove is poisonous, rhubarb leaves are poisonous, so too is yew.  Many of our common garden plants are potentially deadly but, as I only graze on plants I’m triply certain are safe, aconitum’s toxicity was only of mild interest.

Right up to the moment I read of Nathan Greenway, the unfortunate 33-year-old gardener who died, supposedly, just from touching the plant.  Now that did grab my attention.  For several winters, I have grasped aconitum when cutting back in winter – with never a thought for gloves.  Could this plant really kill by contact alone?  Could it be poisonous enough to cause multiple organ failure and death ten days later?  Well, that’s how the media reported the story last November and that is when I first developed Aconitum Anxiety. 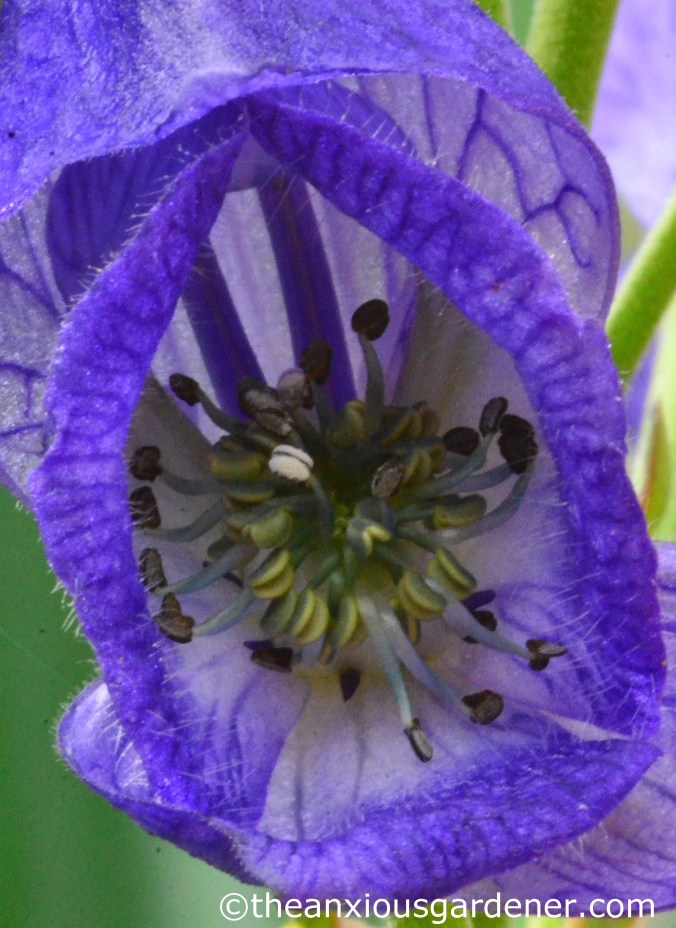 Originally, I planned to write about a plant which I rather like and add two simple warnings: avoid touching it and avoid touching it – even casually or inadvertently.  But as that struck me as a ludicrous caveat for a border plant, I was even going to recommend tossing it on the bonfire (prudently avoiding the smoke).  But then I thought, hang on a moment:  I’ve often touched the plant to no harm and actually, I hadn’t ever seriously considered ripping up all the monkshood at the Priory even after reading about its deadly effect on another gardener.  I decided to look again at the case and check whether there had been any developments since last year.

After a quick Google search, I found John Robertson’s website, The Poison Garden and read two blog posts about Nathan Greenway: one written in November 2014 at the time of the pre-inquest hearing and a follow-up in June 2015 after the full inquest.   And on the strength of these articles, I rewrote my initial draft.

At this stage, I should underline the blatantly obvious – I am no expert on plant toxicology.  John however is and after reading his posts it was clear that aconite poisoning wasn’t the cause of death in this instance.  Firstly, neither aconite nor aconitine (the two relevant poisons) cause multiple organ failure; secondly, death, when it occurs, is very rapid; and thirdly, fatalities from the plant have only been recorded by ingestion.  Cases of death by contact with aconitum are unknown which, considering how common it is, seems particularly pertinent.  The coroner at the inquest, explicitly stated that Nathan had not handled the plant – only that he might have brushed against it.  And because that alone wasn’t consistent with aconite toxicity, he recorded an open verdict.   To quote from John’s blogpost – “The cause of death is multiple organ failure of unknown cause.”  If you’d like to read more detail about this tragic case – and the initial alarmist reporting by some of our media (specifically The Daily Mail) – I recommend the above two links.  For further information about how poisonous aconitum is (and isn’t) here’s the link to John’s fascinating aconitum page.

A photo The Daily Mail might wish to use?

If you grow aconitum, and heard the news reports last year, you too probably suffered from Aconitum Anxiety.  If so, I hope I’ve reassured you or rather, John Robertson has.  John’s website also taught me to take one precaution.  As my hands are usually sliced or stabbed bloody by thorns, I no longer grab monkshood without first pulling on a pair of gloves.  I wouldn’t want the plant or its sap coming in contact with even a minor wound.  On balance though, I would suggest that you continue to grow monkshood if it pleases you.  Admire the late summer blooms, use it in shade where other plants might struggle, wear gloves when handling (as you would to guard against euphorbia sap) but – most importantly of all – for goodness sake don’t eat it.  In this instance, slugs and snails know best.

As far as I know, there is still no satisfactory explanation for the exact cause of Nathan’s death.  I can’t imagine how difficult this past year must have been for the Greenway family – to whom I offer my sincerest condolences.