I wanted to go but would I get it?  The woman in Rye got it but her son did not.

“He’s arty, like me, so I wanted to take him because I knew he’d love it.  I knew he’d get it.”  She grimaced. “But he didn’t; he hated it.  Called it God-awful forsaken.  He said it was bleak, ugly and depressing.  He couldn’t wait to leave.”  She shrugged her parental incomprehension.

But, undeterred by her little tale, Jim and I drove east from our hotel in Rye, crossed into Kent and spent several hours on Dungeness: a flat, stony, peninsular jutting out into the English Channel.

I was excited.  I’d heard and read so much about strange, opinion-dividing Dungeness but I needed to see it for myself.   I want to gush how, on arrival, the first thing one notices is the sky: sky, sea and pebbles; salt and wind.  But that would be untrue.

The first thing one notices is the 1950’s nuclear power station.   Which I wasn’t expecting.  I thought that would be removed somehow; distant and easily ignored.  But no, it broods full-square on, dominating and central – near the pub and miniature railway station – pulling the eye and holding on tight.  Personally, I think it – alone – deserves all those damning adjectives used by the boy from Rye.  I pictured the architect printing the words “Aesthetic considerations?” at the top of their brief – then scoring them out and scribbling, “Nah.”  There is no concession to the landscape, no design beyond the functional, no thought for neighbours forced to look at the bloody thing day in, day out.  Did the architect think no-one (who mattered) would see it?  That nobody would care? 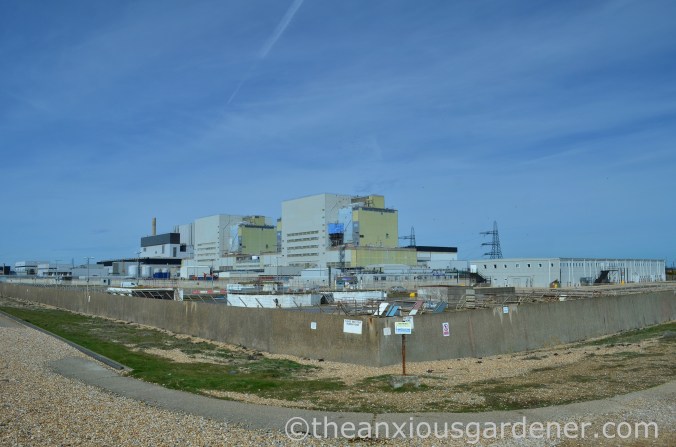 And why paint it a sickly yellow?  A deliberate warning to stay away?  “This is the colour your skin will turn should you loiter.”  Works for me.

One of the two reactors – Dungeness A – closed in 2006 and the second – Dungeness B – was due to follow suit in 2018.  But the owners, EDF, have recently announced a ten-year reprieve – despite concerns of rising sea levels and storm surges on this low-lying, coastal site. 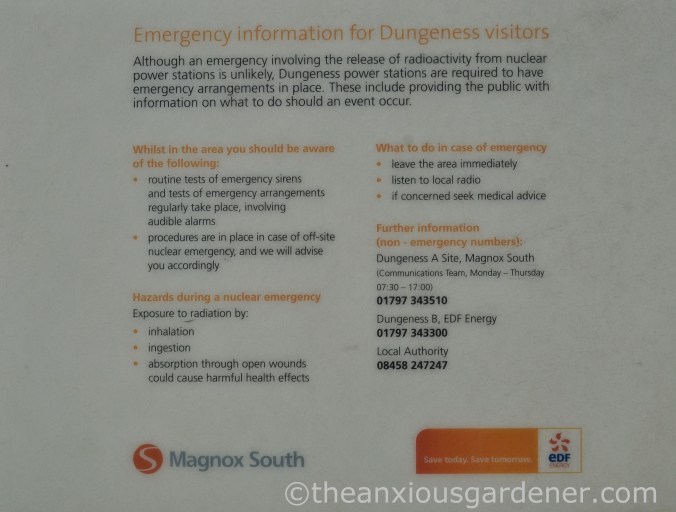 A calmly worded notice told me what to do during an ‘event’.   You needn’t bother reading it, I’ll summarise: don’t breathe, don’t bleed, run away.

On a sunny April Sunday morning, Dungeness was busy.  We turned our backs on the power station – which is all any of us can do – to join an excitement of twitchers.  And they were jolly excited, though we couldn’t tell why.  Other than a few gulls, I saw nothing to make a birdwatcher twitch. 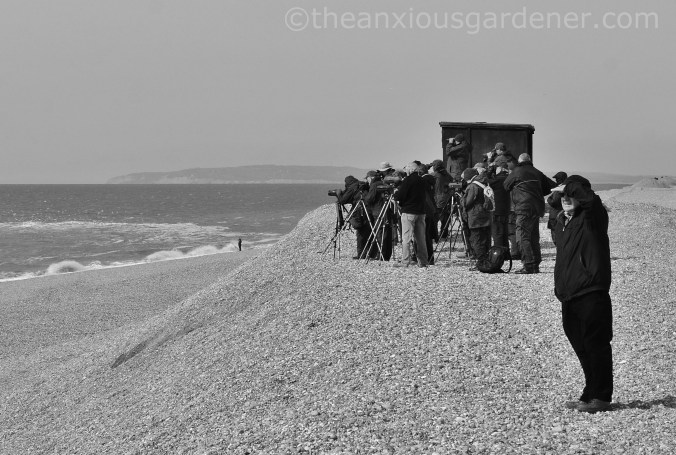 Maybe it was  a twitcher-dating group, excited at shy eye-contact, gentle innuendo and the illicit rustle of Goretex; simply exuberant at not being alone in a draughty hide sipping flask tea and eating Marmite sandwiches.

There are two lighthouses on Dungeness.

The elegant old lighthouse closed in 1960 having served 54 years.

Not a terribly long time for a structure built painstakingly from 3 million bricks … but, you see, the newly built power station partly obscured its light and, at a stroke, made the lighthouse useless.

I liked the replacement very much:

a sleek, space-age beauty perched upon a spiralled, concrete ramp.   Was it designed by Hergé?

His space rocket would stand seamlessly beside it, refuelling.  ‘Destination Dungeness.’

But how awful to live next door as thick fog floats in off the Channel.  And which long-suffering local volunteered his face for the graphic?

Dungeness is a place of artists and fishermen; day-trippers and out-of-town-holiday-home-owners.  We sought out the first and wandered about the garden and studio of a resident.

I liked the chap – if not his work especially – with his friendly face and manner, the sparkling drip at the end of his nose and a warm, tight fug of last-night’s scotch.  We had a short conversation about gardening and a shared love of sea-kale.  After saying our goodbyes, and as I drifted away, he called out, “Keep your fingers in the sod,” to which I had no reply other than a lame, “Oi, you can’t call Jim that.”

Dungeness isn’t neat and tidy, spick and span.  In fact, in places, it is downright messy – unless this is another art installation.  If so, I don’t get it.

Fishing boats still work from the beach and we naturally gravitated to sample their catch at The Dungeness Fish Hut.   Jim ordered two Fisherman’s Rolls with crispy fillets of fried sole (to the disbelief of the man standing next to him.  Ought we have had the crab?). 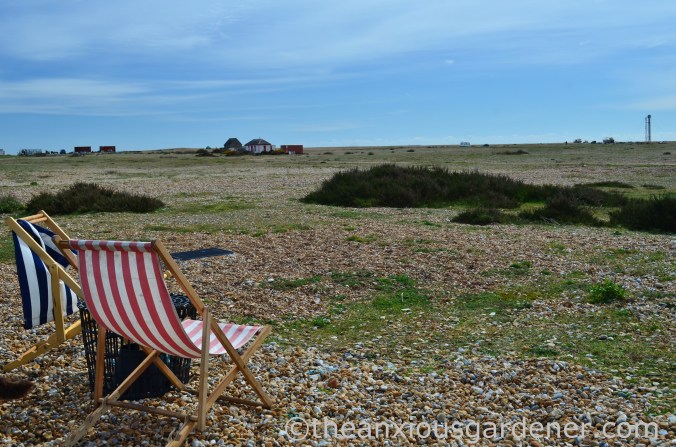 We sat, quietly munching, appreciative, gazing out over pebbles and sky, wrapped against the cold wind.  English seaside typified, only with added sun.

The range of beach architecture is wide and eclectic.  There are houses and shacks for every taste: the dishevelled pink; 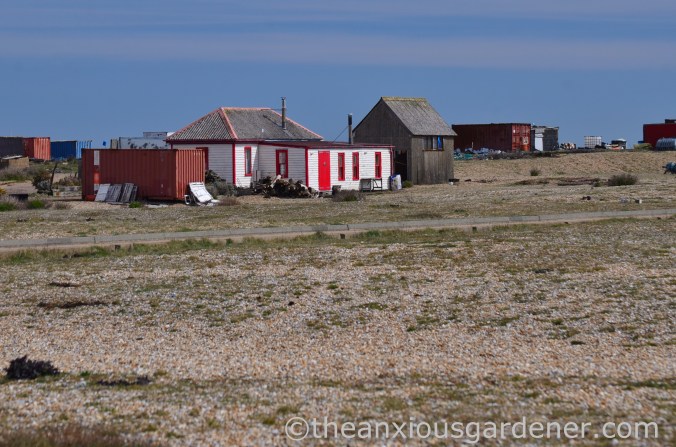 those airlifted in from the set of ‘Bad Day at Black Rock’; 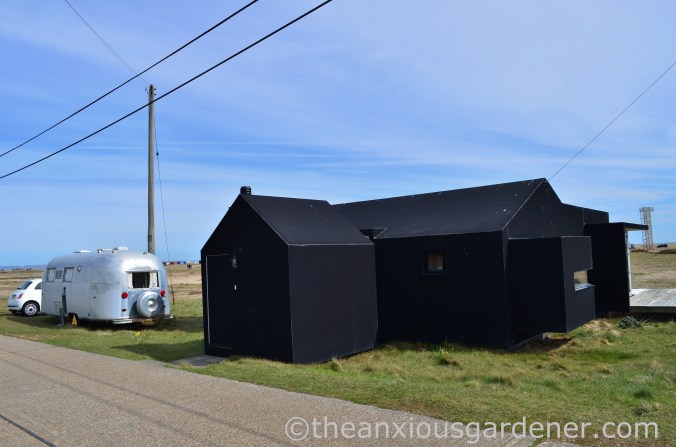 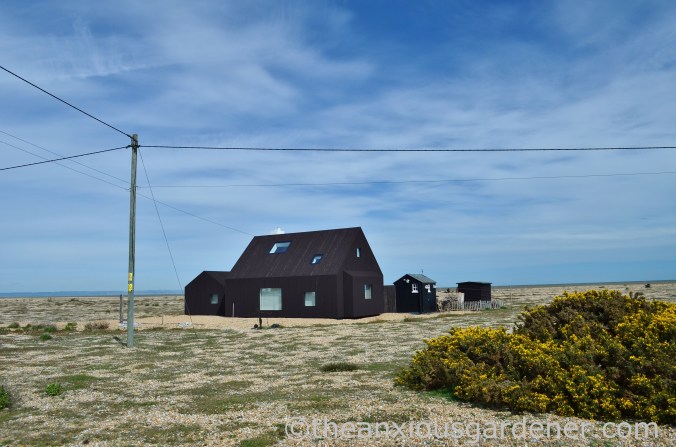 the black; the white; 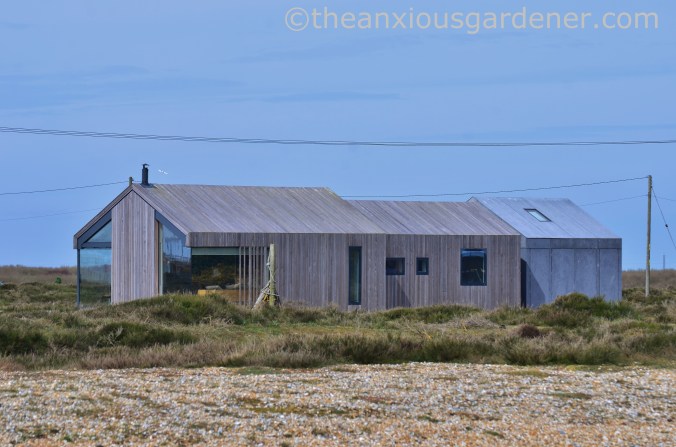 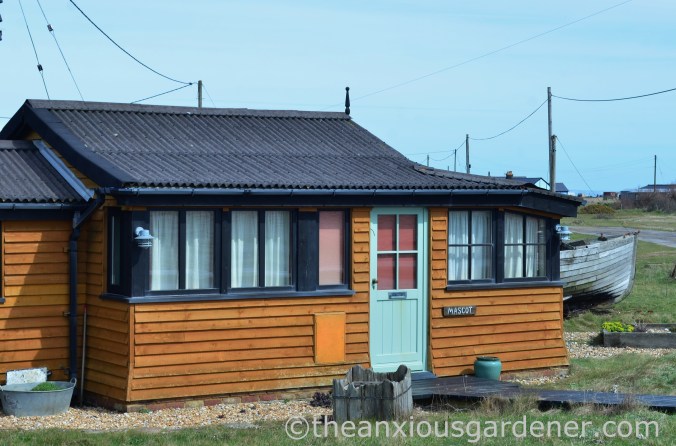 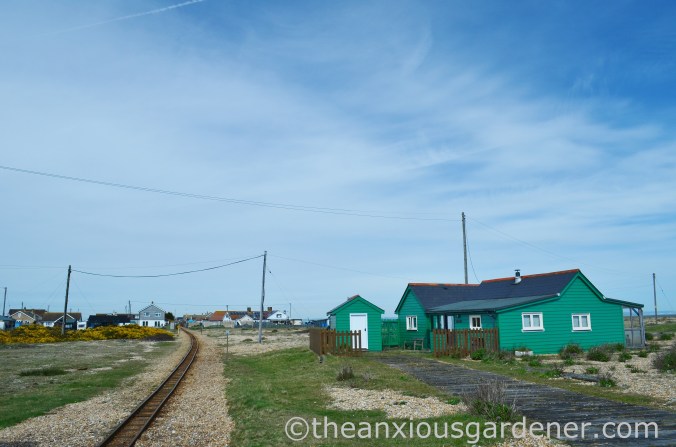 And the available.   Property on Dungeness doesn’t come to the market often but this three bedroom house is currently for sale, a snip at £385 000 (with great views of the power station to rear).  Fancy it?  Details here.

I did, mostly.  I loved the wide watery sky, the island feel with the busy Channel to east and west, the peace, the saltiness, clear light, the cry of gulls and the desolate, harsh environment of one of the largest shingle beaches in the world.

And I liked how it is different to anywhere else I’ve been.  It’s a bit like parts of Norfolk, or the Cumbrian coast, or Cornwall, Brighton beach as well but Dungeness is wholly unique.

It is an odd place and I can understand the boy from Rye’s reaction.   Dungeness isn’t everyone’s cup of tea. 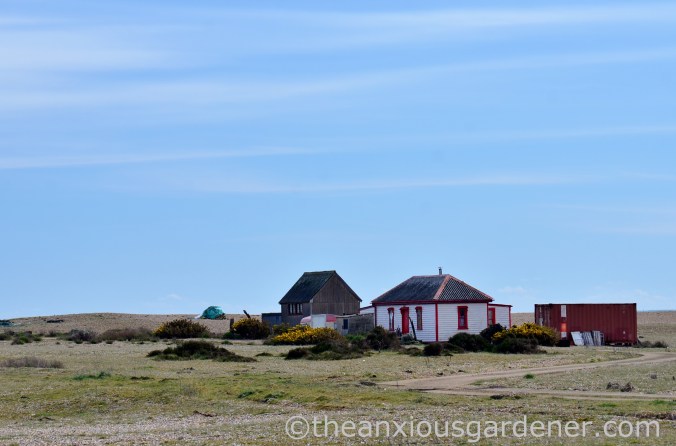 I liked it enough to go back.  I want to spend a weekend there to enjoy the quiet after the crowds have left; sip a glass of wine at sundown; see the dawn with marmalade on toast; watch this weird corner of England under different weather and different skies.

I might embark on the small-gauge, very cramped carriages of the steam train even.   But I don’t want to live on Dungeness.  I’d miss trees too much for a start and green fields and hills.  And I would fear for my liver.  How soon, I wonder, before I’d forge a querulous attachment to whisky and sport, unaware, a glittering drip on the end of my nose.  I’m not saying isolated Dungeness would turn me to drink but it’d probably give me a strong nudge.

There.   A whole post about Dungeness with not a word about Derek Jarman nor Prospect Cottage (but there might be a sneaky photo of the latter in here somewhere).   We did see the famous garden, of course, but I’ll write about that another day.

(The header photo on this post is the ensign of Trinity House, the General Lighthouse Authority for England.  Their flag flapped beside Dungeness new lighthouse.  Trinity House is shorthand: their full name is – deep breath – The Master, Wardens and Assistants of the Guild Fraternity or Brotherhood of the most glorious and undivided Trinity and of St. Clement in the Parish of Deptford Strond).