Each year, I hope that the Tropical Border will improve on the one before; that it will produce more flower, more stature, more oomph. 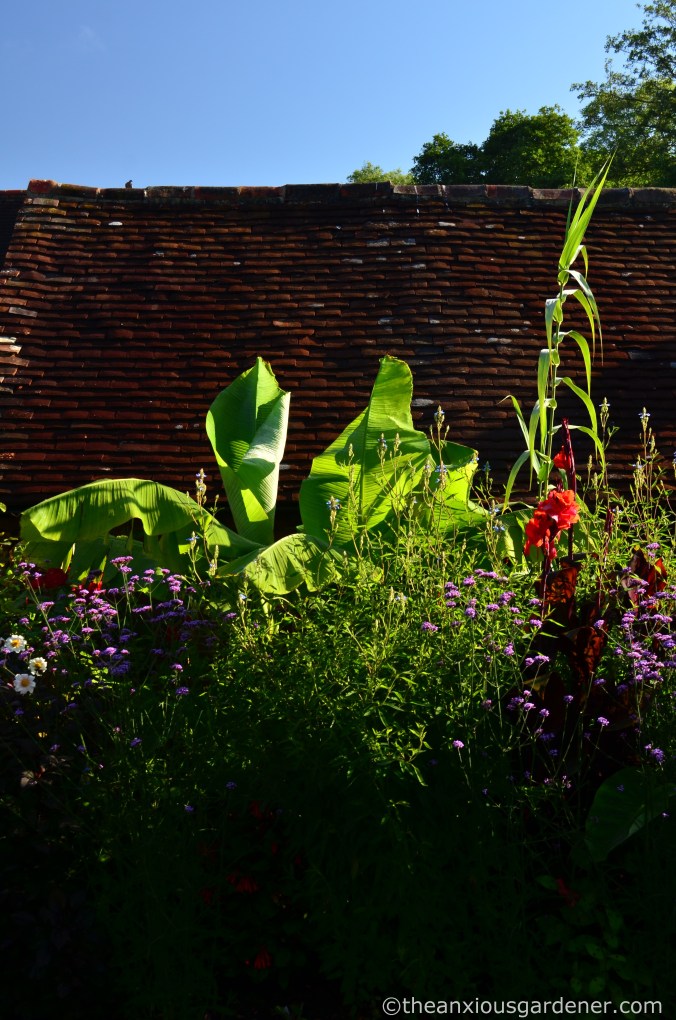 And mostly that’s what it has done over the past five years … except perhaps this year.  Overall, 2016 hasn’t been its best.  It still looked pretty good though and the unfurling of vast leaves and splashes of loud, vibrant colour gave me a great deal of pleasure.  But if a few plants under-performed or failed to live up to my lofty expectation well, we all fail to deliver sometimes.

I planted out the big tender plants from the greenhouse later than normal.  Usually I wheel out the colocasias and red bananas in April but – after some sad cases of frostbite in the past – I deferred till 12th May;

when Tetrapanax papyrifer ‘Rex’ showed the first glimmers of life.  Last year, I installed soaker hose in the border and connected it to an automatic watering system, which has saved me endless hours staring at a jet of water.  I left the hose in the ground overwinter and it survived without mishap … right up until the moment I stabbed it with a digging fork.  Twice.  (Cutting out the punctured length, inserting a short, rigid pipe into the cut ends and securing with couple of jubilee clips fixed that problem).

As new growth emerged, I gathered my formidable number of steel plant supports

and, either singly or in pairs to form circles, pushed them in around the bendier of plants: the dahlias, the cannas and Salvia uliginosa.

By early July, the bed filled out shrinking the expanse of brown earth but one of the large red Abyssinian bananas (Ensete maurelii) – visible left, off centre – didn’t grow at all: from planting out until I dug it up again in November.

A month later, when the border matured, it was completely lost from view and remained so for the rest of the season.   Which was annoying.  The Ensete is still alive it just … erm … didn’t grow.  I have no idea why as, having now dug it up again, the root system is healthy.  Oddly, a similar thing happened in 2015 but to the other of my two plants.  Perhaps, they’ve decided to take alternate rest years.

Colocasia esculenta, on the other hand, did pretty well.  I planted them further forward than in the past and their big, quivering leaves poked out from the undergrowth like an inquisitive herd of small elephants.  Or something. 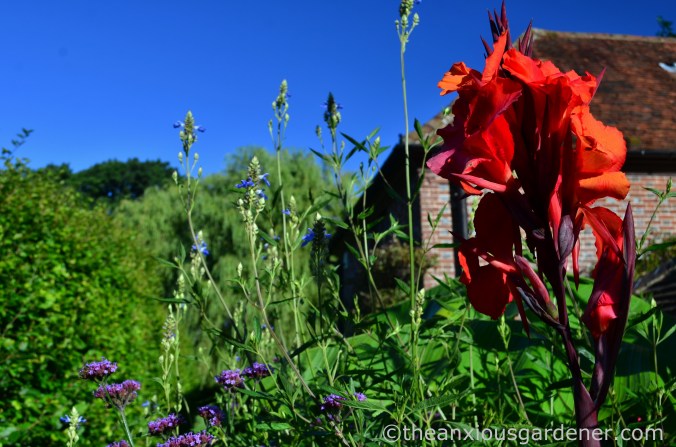 Canna ‘Red King Herbert’ also did well with my steel supports preventing their usual habit of kneeling over to kiss the grass. 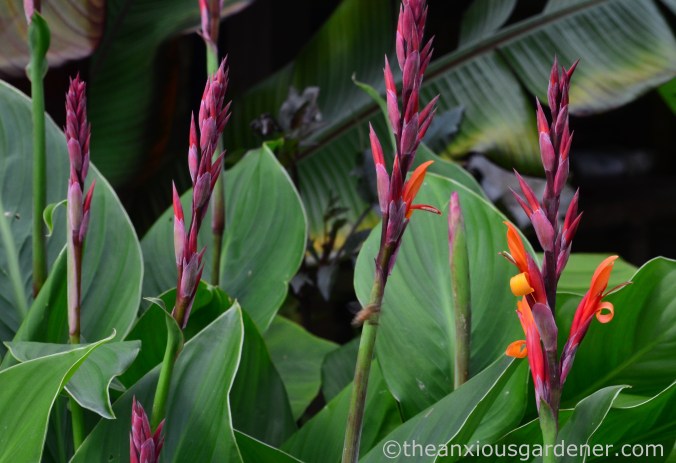 As I’ve written before, Canna coccinea doesn’t need staking and arguably had more flower this year.

I’ve split my original clump to provide two big plants and would split it again if I could squeeze in a third. 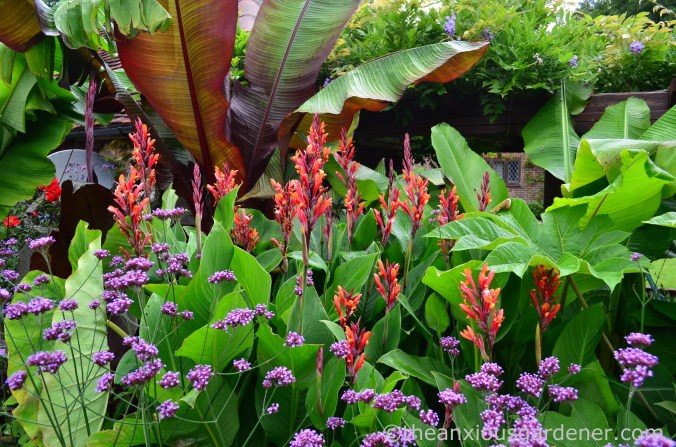 It is such an easy, satisfying plant to grow 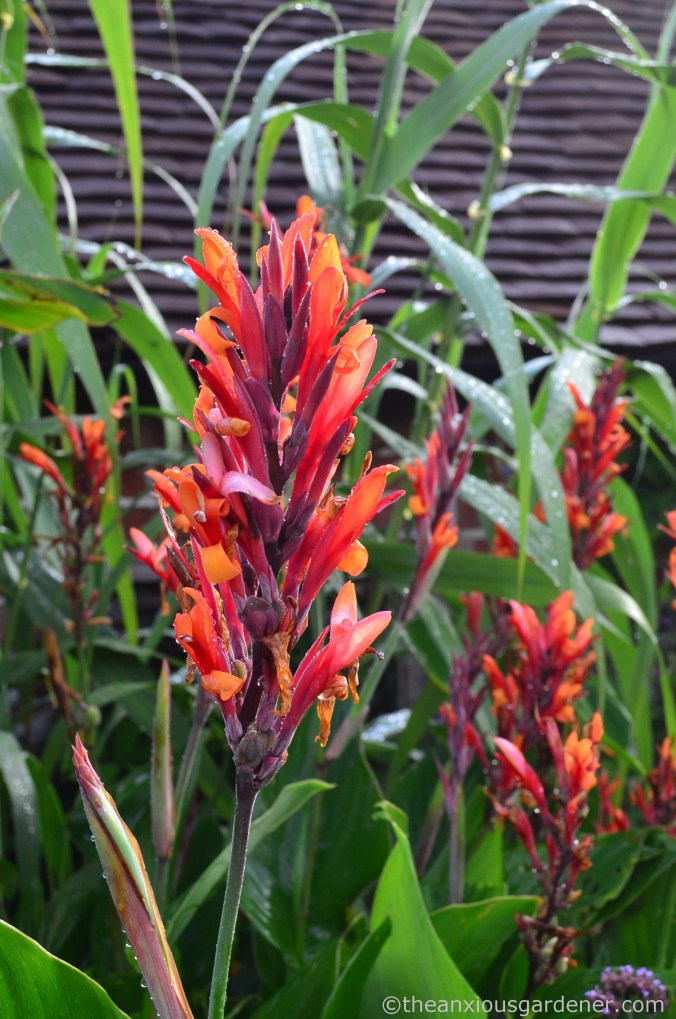 aided by hefty amounts of pelleted chicken manure and regular watering.  It stays in the ground over-winter under a compost mulch.

Dahlias on the other hand were a mixed bag.  A couple of years ago I wrote “Dahlia ‘Twyning’s Smartie’ produces a staggering amount of flower – each one different.  It is a reliable, non-stop stalwart, thuggishly shouldering to the fore.”  But that was then and this year my confident assertion proved patently untrue: Smartie failed to produce any decent growth and isn’t visible in any of these photos.  I leave my dahlia tubers in the soil to overwinter too, again under a mulch, but I shall dig up the three or four Smarties to see what’s up.

Fortunately another mainstay of the bed flowered as well as ever – Dahlia ‘Bishop of Llandaff’. 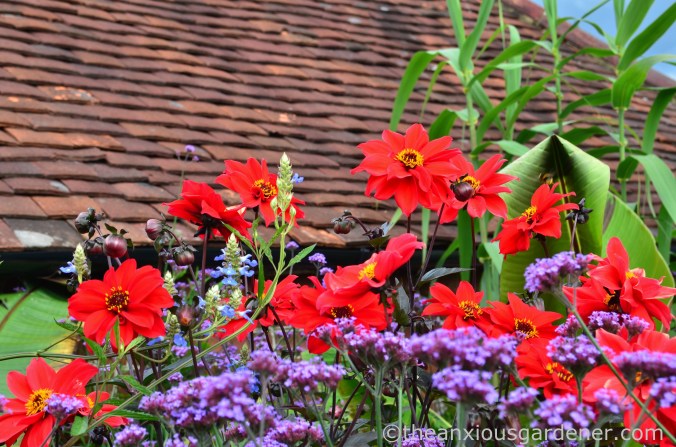 It’s curious that under the same conditions as Smartie, Llandaff grew as normal

along with my third dahlia, D. ‘Twyning’s After Eight’.

I ought to be grateful that these two varieties performed

(but I did miss my Smartie).

A new addition to the border last year was the hardy banana, Musa sikkimensis which continues to thrive (and reinforces my growing disregard for the more mundane, unmarked leaves of Musa Basjoo).

One of my two Abyssinian bananas did produce huge red leaves – central in the above photo – but a 50% strike rate is pretty rubbish and the failure of the other left an irritating hole in my grand scheme.  (Which actually shouldn’t be so very irritating given I’ve had the same problem two years running). 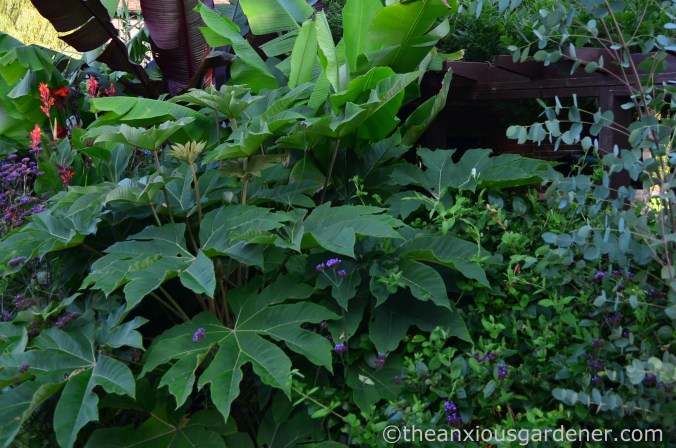 From those few tiny leaves in May (shown in the third photo from top), Tetrapanax papyrifer ‘Rex’ didn’t disappoint.   I hadn’t realised how invasive its roots are however and little clusters of leaves shoot up metres away from the parent  – and are quickly pulled up.  How many more TPR’s can I give away?

Despite plant supports, Salvia uliginosa still keeled over.  It grows to over six-foot and a metal ring about its knees didn’t much prevent the top two-thirds flopping about all over the place.

And that’s a shame for a plant I love so much; a plant with an enormous amount of flower right through to the first frost. 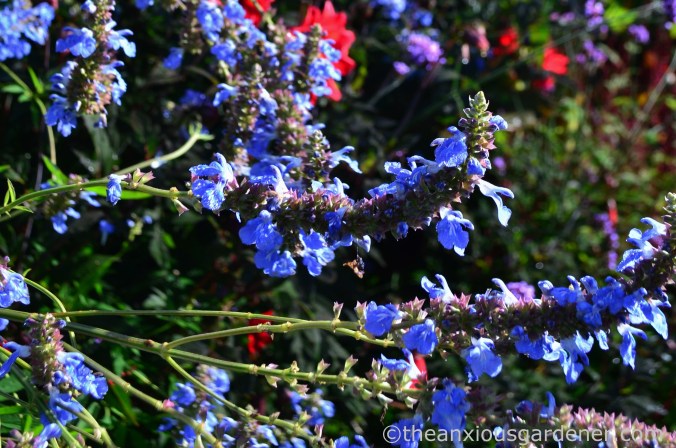 But I shall remove it completely from the tropical border next year.  With plenty of feed and daily watering it grows too vigorously, flops and madly colonises by runner to swamp the neighbours as well.  A sad farewell to an otherwise excellent plant (but I’ll use it elsewhere).

I’m also going to remove all the Verbena bonariensis.  I originally added this as filler when the bed was still gappy but it’s hardy necessary any more (though I said that a year ago so don’t be cross if you spot it again in 2017). 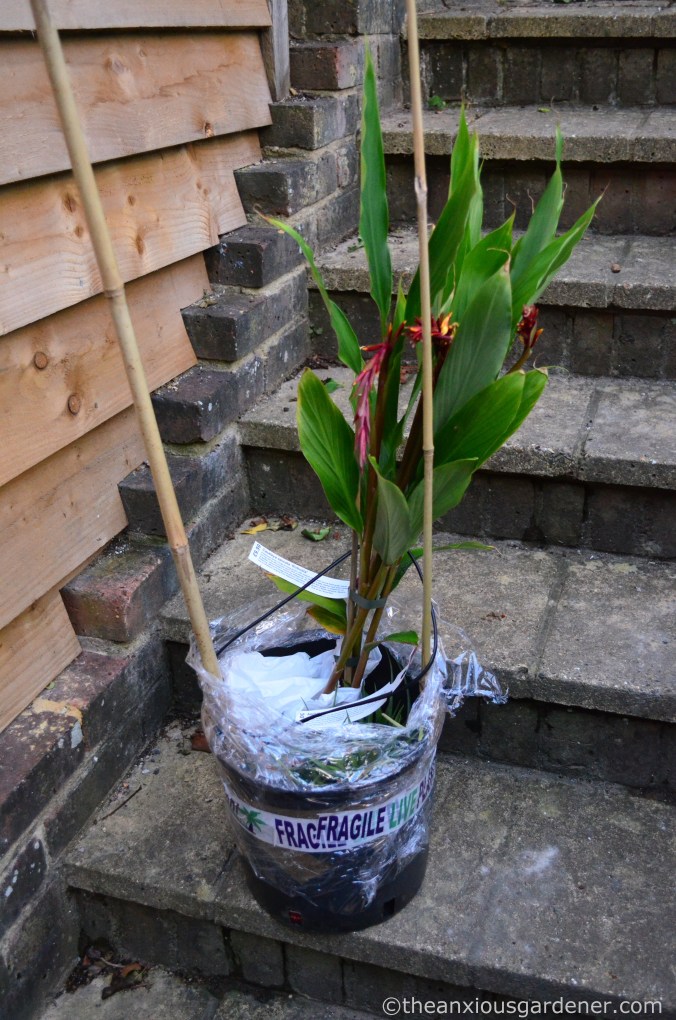 Next year, thanks to the kindness of Big Plant Nursery, I’ll need to find space for Cautleya spicata ‘Robusta’, a hardy ginger, and Aechmea recurvata var. recurvata, a “super rare  bromeliad”.  Fancy.  BPN very kindly sent me these two gifts along with an invite to visit their nursery in West Sussex, which I certainly intend to take up.

I’ve written at length over the years about my tropical border with plenty of detail on all the plants I use and various ones I’ve tried and discarded (see, amongst others,  The Tropical Border – 4th Year).  This 2016 post, originally scheduled for September, is late because of our continuing house renovation but I wanted to continue my now annual tradition of showing the border’s evolution, even without that detail I’ve provided in the past.  If nothing else it gives me a useful record of the bed from one year to the next.

Normally The Priory has its first frost in October, sometimes even in September.  This year, the border didn’t meet its mushy end until 1st November – giving me the longest display to date.  The tropical border might be a lot of work, a lot of angst and sometimes a little disappointment but in return it provides a big box of delights.  I can’t wait for 2017.