I was asked a week or two ago to write a book review by those lovely folk at Transworld Books.  Even though the request came by e-mail, I still found myself  looking idly over my shoulder (Mr Bean like) to see who they might be asking.  But, it was me and a few days later, I received copies of The Ten Minute Gardener’s Fruit, Flower and Vegetable Diaries by Val Bourne.

The author writes for various publications, including: The Telegraph, Saga Magazine, The Oxford Times, Homes & Gardens and RHS The Garden.  Sadly I don’t read any of these; not one and so consequently I hadn’t heard of Val Bourne before.  The books are ostensibly aimed at the novice but also seek to teach the experienced gardener certain techniques, facts and tips to follow throughout the gardening year.
Each of the three books gives a  variety of tasks and jobs that need to be done each month.  So, for example, in the Flower Diary for April there are six tasks: cut down dogwoods and other winter stems, cut back penstemons and Mediterranean plants, divide and propagate perennials, cut back buddlejas, destroy slugs and snails and divide erthroniums.

The tasks have detailed instructions and are accompanied by ‘Did you Know’ fact boxes, ‘Secrets of Success’ boxes and ‘Organic Tips.’  (Anything that blows the organic trumpet is a good thing in my view).  The writing is clear and concise and delivers all that you need to know on the subject in hand.  These aren’t diaries in the conventional sense; you’re not going to want to leap into bed and read them cover to cover.  (Not like snuggling down with Monty Don and his ‘The Ivington Diaries,’ which despite intending to read in tandem with the unfurling of the year, I ended up snaffling in a few short days).

No, you will want to dip into Val’s books all year round and be reminded of what you need to get on with.  (I intend to move some herbaceous peonies and  made a casual, mental note to check when would be the best time to do this.  Then I happened to glance at jobs to do in October, in the Diaries, and saw ‘Divide and Move Peonies’ – mid October. Sigh – another job leapfrogs to the top of The List).  I shall leave my copies in the greenhouse at the Priory and regularly check, over my morning cuppa,  what’s next on the imminent list – and what I’ve forgotten to do.
It was unfortunate that in checking a pet interest of mine (the making of leaf mould), I did find a mistake* but generally I was very impressed with these books and one line in particular struck a chord:  “If you have a rose that’s a martyr to (black spot), don’t spray.  Dig it up.”  I instantly warmed to Val on reading this.  I fail to understand why gardeners persist with growing varieties of rose that need spraying with noxious chemicals; chemicals that state quite clearly on the label that they kill bees.  As if honeybees haven’t got enough problems.  For goodness sake just replace it with a more resilient variety – there are plenty to choose from.  Good for you, Val. 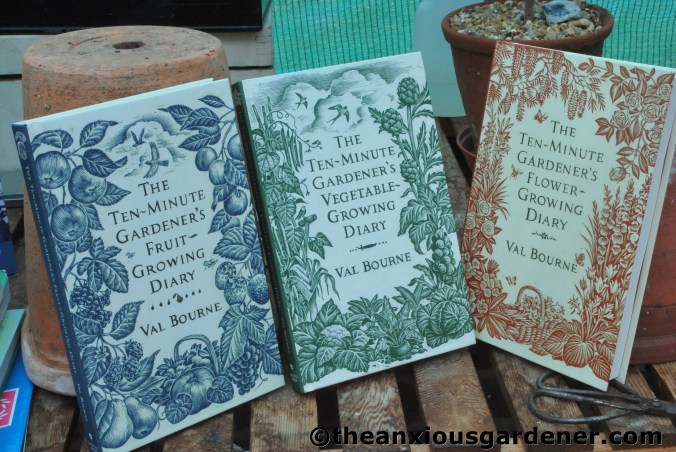 As a little gripe, I would say that it would have been nice to have had some illustrations.  The covers are adorned with beautiful  woodcuts (I’m a sucker for a good woodcut) and it would have been nice to have had some of these inside the books.  (There are next to no pictures).
But that is just a little gripe.  These are great little books, packed full of handy hints and information, with wipeable covers for muddy fingers and batting strongly for the organic team.  What’s not to like?  Ask nicely and you may get a volume or two in your Christmas stocking.  Er, no.  Not from me; from your loved one.  Ask me again next year, when I know you a little better.
*  The Flower Diary for October states:  “Certain leaves are slower at producing leaf litter: these include hazel, beech, oak and hornbeam.  Others (like sycamore, horse-chestnut and lime) are much faster.”  The two leaf groupings are actually the wrong way round; oak and beech break down relatively quickly.  I don’t like to be pedantic but as a self-professed anorak-wearing-leaf-mould-making-geek, I simply can’t help myself on this occasion.