I’m rather fond of lilies.

I know not everyone is. 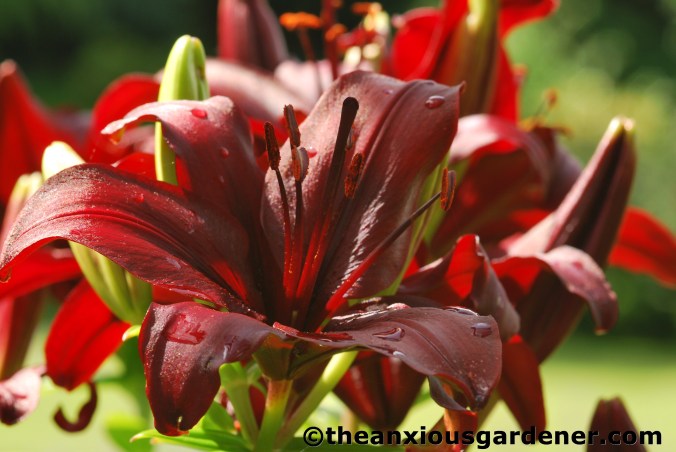 But I am.  I grow them in some of the borders and …

After two years grace, lily beetles have now arrived at the Priory.

Did they smell the perfume from across Margaret’s fields and home in from some distant garden?  Smacking their lips?  Or were they smuggled in by my Arch Gardening Enemy (responsible for skewing so many of my gardening efforts)?

I wouldn’t normally relish squishing any creature; especially so handsome a beetle as this.  But having grown potted lilies for several years now, I know LB’s intimately and despise them.  And … and … and … (splutter) their larvae are overwhelmingly revolting.

They cover themselves in a thick, towering coat of their own slimy, glistening excrement – a deterrent to being eaten.  Works for me.

Gross, huh?  Want another shot of one? 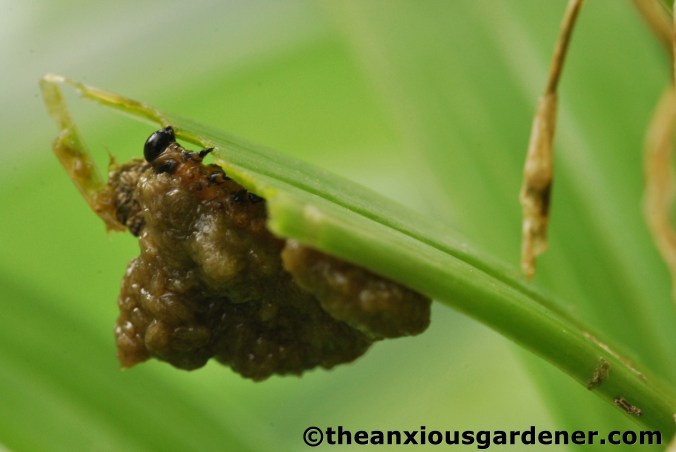 Probably not but here you go anyway.

In addition another favourite plant has been subject to attack: Solomon’s Seal (polygonatum).

There is one small clump which survived the-years-of-neglect and, during April, it tends to draw me over.  Or causes me to stop and pause as I walk past.  It is a plant that re-pays being closely studied.

But now, in July, it is just a food crop for the Solomon’s seal sawfly.  In the past I have just let these grubs be – they don’t seem to affect the plant’s flowering.  But I read recently that having stripped the leaves, the fully fed and nicely fat larvae simply burrow down into the soil and pupate the following year.  Repeated annual feasting can’t be good for the plant’s vigour and, as it seems such a simple life-cycle to break, I have begun picking them off.

Another sawfly, which attacks birch (yep, it’s called the birch sawfly) has been a problem these past two or three years.  If I hadn’t removed them all last year, they certainly would’ve stripped my three young Betula jacquemontii ‘Snow Queen’ of all their leaves.  This year I found only one larva (and quickly crushed it thinking there would be many more – hence no photo) and only one branch slightly affected.  Did birds eat them?  I like to think so.  It would be a little payback for all the money spent on birdfood.

But not all the plants are under sustained assault.  Opium poppies survived the-years-of-neglect too – though this year, their numbers are way down.  They self seed prodigiously but I do pull them out of some of the beds.  You can have too much of a good thing.

But as much as I like them, some are too frilly by far.  Not only do I find them too fussy, bees struggle to get at their nectar.

The kidney beds are at long, long last putting on a show though it is not as hyper as last year.

Day lilies (again these are survivors from before my time and so variety unknown) have only just started flowering.  Behind them is …

… Campanula lactiflora looking jolly smart and at one bed’s end … 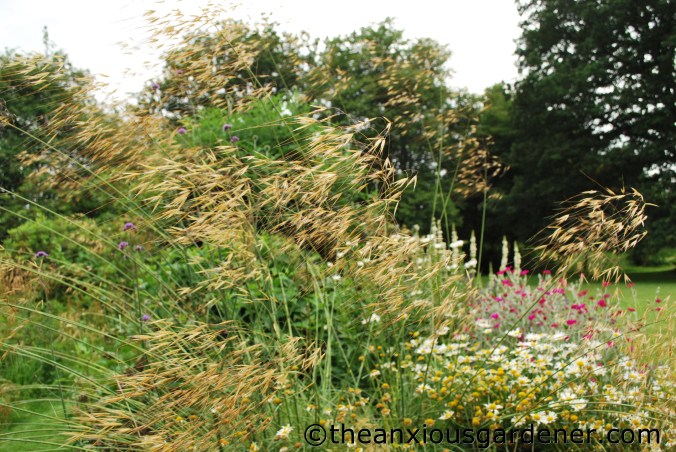 … a Stipa gigantea has reached maturity.

Also in the kidney beds are Verbascum chaixii ‘Album.’  I originally grew these from seed and they are now increasing in number sufficiently for me to spread about elsewhere. 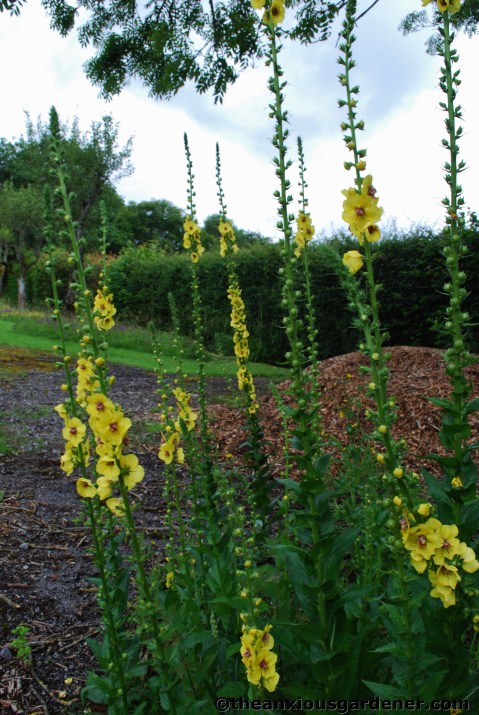 And, talking of verbascums, out on the drive a single plant (which I didn’t have the heart to strim) has developed into a sizeable grouping.  Goodness only knows where the seed came from.  I shall dig some up and use in the gardens.  Anyone know the variety?

I also transplanted some Verbascum olympicum from the Old Forge – where they flourish on the dry, chalky soil.  But here at the Priory, they are still a long way from flowering; if indeed they will flower at all in this wet and cold, drab and overcast ‘summer’.

My Ligularia przewalskii (written with confidence but pronounced with none at all) has many more flower spikes than last year.  It, at least, appreciates all the rain we’ve had.

But roses do not relish rain.  A couple of weeks ago, this old Rosa ‘New Dawn’ around the front door to the house looked pretty but the flowers didn’t last as long as usual.  The rain and wind soon battered them to a sodden, pulpy oblivion.

The rose tunnel is also in flower (though there are gaps.  I have planted new bare-rooted plants to fill these).

After a visit last weekend to the stunning gardens at West Dean, I can at last identify the climbing rose on the tunnel.  I had suspected it was Sanders White but it’s nice to be certain.  What a beauty it is.  Just a shame we haven’t got the sunshine to show it off at its best.

Perhaps next year?  Or the year after.  Or the one after that.

38 thoughts on “Of Flowers And Foes”