Old, dilapidated and long overdue for renovation, The Priory garage and workshop is a magnet to birds seeking a home.

Robins, blackbirds and wrens hop through holes in the rotten doors or missing window panes, to build a nest and raise chicks.  A family of robins left in the past few days and I miss their chirping and twittering; the young flitting about my head as I wheel out a mower or heft a bag of compost.

Other birds check the garage’s suitability too but only when the double doors are open.  I shoo out swallows occasionally (once I lock the doors they can’t easily get out again) but I don’t notice every casual visitor.  The other day, on opening the doors in the morning, I found a dead nuthatch at my feet: I must have inadvertently imprisoned him the day before.

A couple of weeks ago, I opened the garage’s second pair of double doors to help release a great spotted woodpecker who, trapped inside, was banging repeatedly, madly into the window above the wide-open doors.   I retreated and watched from a distance as he finally swooped away to freedom.

Then on Friday, during an almighty thunderstorm, I walked into the garage looking for shears or secateurs or a trowel.  Actually, I have no idea what I was looking for.  As usual, I’d traipsed across the garden to fetch something only to stand bewildered on arrival, having forgotten completely what it was I’d come in for.  Still pondering over the tools hanging on the walls or lying on the workbench, I was roused from my confusion by sudden frantic flapping.

In the gloom, at the building’s far end, a male kestrel thrashed his wings against a window.  Wet and bedraggled from the rain, he must have arrived shortly before me.  As I watched, speaking softly, the bird calmed, stopped his fuss and I ran for my camera.

Unlike the woodpecker, the kestrel didn’t career about hysterically seeking a way out but clasped the sill, gazed outside and then over at me and back outside again.  I opened the other double doors and left him alone to find his own way out. 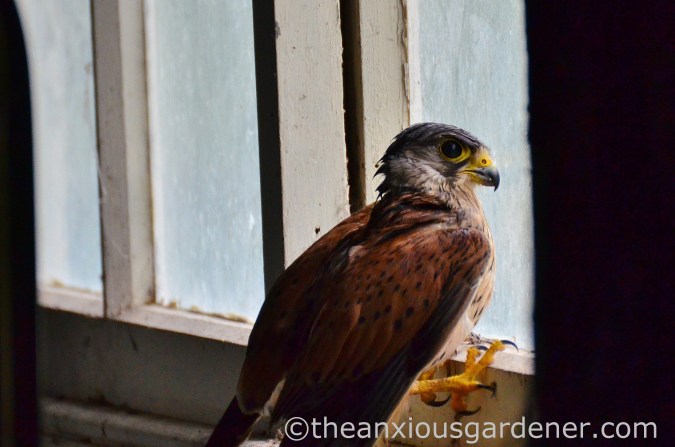 But ten minutes later, he was still where I’d left him on the window frame.  We looked at each other for a while.  He was beautiful, this hawk, and cool too; though we both jumped at a terrific flash of light and crack of thunder; and with that he resumed his thrashing against the glass.  Worried that he’d hurt himself, I grasped him gently with one hand and, cautious of sharp beak and talons, carried him outside.  He didn’t bite or scratch and, for such a fierce-looking creature, he was docile, astonishingly lightweight and very soft to hold.

Reluctantly, not wanting the moment to pass – not wanting to let him go at all – I put him on the ground and, instantly, he shot up and off over the east lawn, passed overhead and then disappeared through the conifers above the greenhouses.  More cool even than before.

I don’t often see kestrels at The Priory – let alone hold and study one close-up.  How depressing it would have been to find him dead, like the nuthatch.  Perhaps it’s just as well my memory is rubbish or else I might have walked in to the garage, quickly grabbed what I needed and left without noticing the bedraggled kestrel; and just as likely, locked him inside for the weekend, only to find him lifeless at my feet on Monday morning.

40 thoughts on “The Bedraggled Kestrel”