My holidays are often quite adventurous: cycling through the German countryside, hiking across British mountains, bobbing down the Zambezi in a barrel, play-wrestling polar bears on Svalbard – that sort of thing. 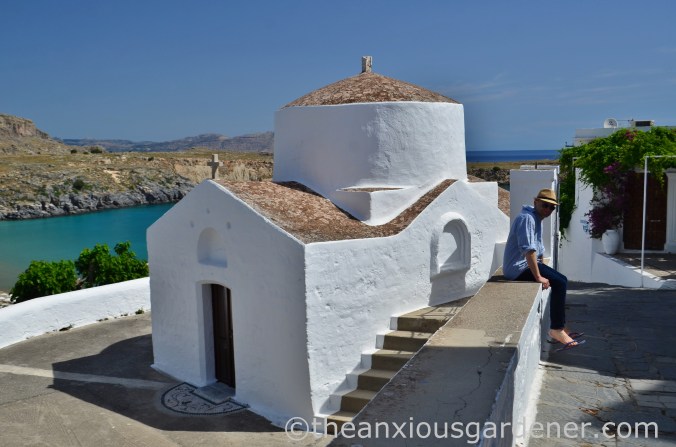 But this year, Jim and I decided to plump for something a little more conventional, a lot more lazy.  A few weeks ago we boarded a very swish, very new Boeing 787 Dreamliner – which was a personal excitement – and flew to the far end of Europe, to the Greek island of Rhodes.

Our ultimate destination on the island’s eastern coast was Lindos; somewhere I know very well.  I say that I know it very well but as my first visit was in 1983 and my last in 1985, perhaps I don’t know it quite so well as I like to boast.

But thankfully, mercifully, in 32 years it has barely changed.  Lindos is still a little town of blinding-white houses clustered adoringly at the foot of a rocky acropolis.

And what an acropolis: a site and sight as good as any in Greece. 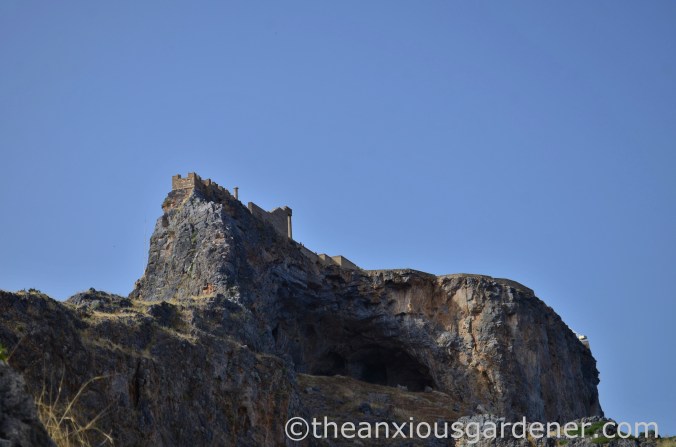 It is imposing, dramatic and craggy from any angle; and not a citadel I should want to storm after breakfast.  So, instead, one morning we walked up the long winding path and paid our entrance fee.

They’ve all been here you know, on the acropolis: the Romans, the Byzantines, the Knights of St John, the Ottomans, the Italians.  The Greeks. 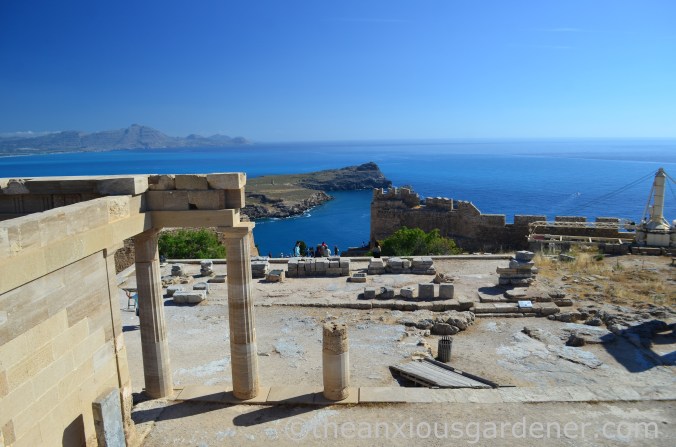 And now an international crowd of scantily clad tourists, thoughtfully displaying their wobbly, sun-burnt skin and once crisp, what-once-might-have-seemed-a-good-idea tattoos.  I thought it quite sweet that they thought this intimate display might lighten up my day (but then I was in a snooty frame of mind). 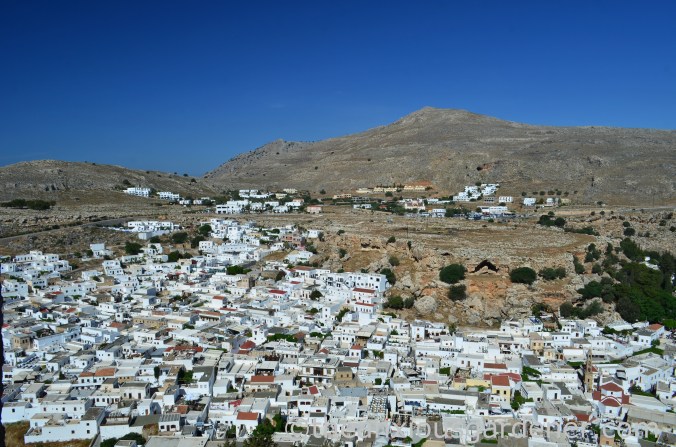 With sheer force of will, I tore my eyes off the most eye-popping examples, closed my mouth and hacked my way through a thicket of selfie-sticks to the medieval walls on the western side of the acropolis.  I gazed down over the Middle-Eastern-looking town, trying to pinpoint the house I’d rented in 1983.  It had been small, square, flat-roofed and white.  That narrowed it down a bit. 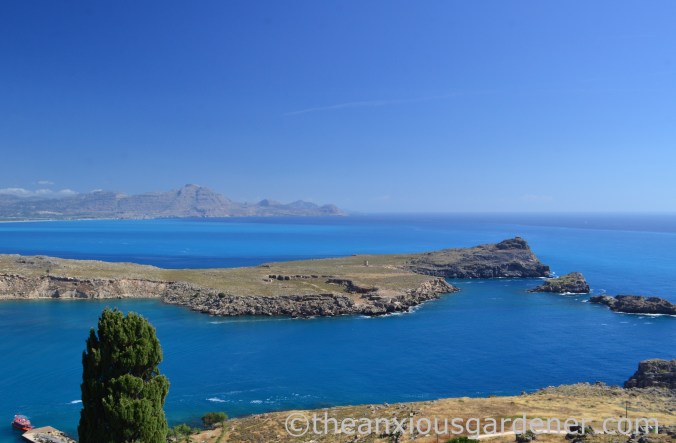 To the north mountains, headlands and bays fade way towards the top of the island and Rhodes Town.

Whilst, to the south, lies beautiful St Paul’s Bay. 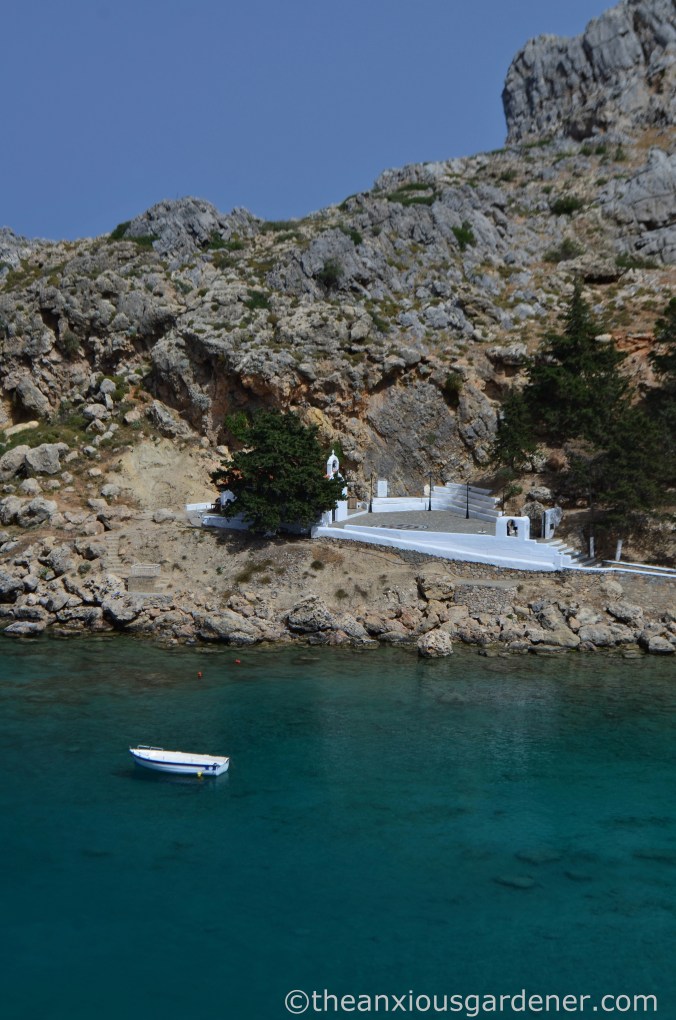 St Paul was shipwrecked here, hence the name, and in August 1983 I was moped-wrecked here (which doesn’t really work as a link but never mind).  Zipping about on a rental moped, I zipped a curve too fast.  The bike slewed one way and I flew, all flailing limbs, in the other.  I clearly remember floating through the air, seemingly in slow motion, with time enough to quietly repeat the same four-letter word.  Like Icarus, my inaugural flight didn’t end well.  Luckily, I didn’t head-butt a rock; unluckily, and wearing shorts and a vest, I landed on knee and elbows, skidding across gravel.

I was laid up in my Rhodes Town room for several days; nursed, fed and fussed over by an adorable, clucking landlady before my pal, Michael, and I relocated to Lindos.  We spent our time doing not very much: riding slower-than-a-moped donkeys to near-by Pefkos, reading, exploring the hot hills and snorkelling in St Paul’s Bay.

The bay is busier now, of course, but it is just as lovely; the water as clear, as warm and as full of sea-life.  On that first visit, I spent absorbed hours with mask and snorkel: exploring the cove, chasing brightly coloured fish, seeking that elusive ancient statue or golden amulet I was convinced was waiting to be discovered on the sea-bed, 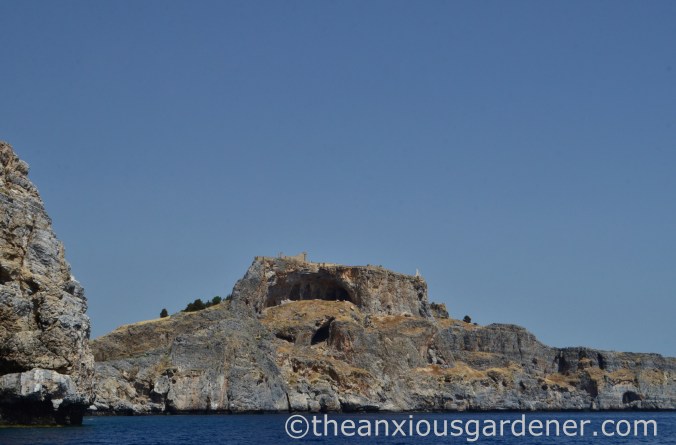 and then kicking out into the open sea.  In the bay, the water is a few feet deep but beyond the natural harbour walls a vast underwater cliff disappears into the deep and the seabed is invisible. Suddenly, I was floating alone in the Big Blue, dazzled by flickering sun-beams, dipping down as far as I could into colder water.  But then three thoughts coalesced in my hitherto empty head: a recent report of Great White sharks in Greek waters, my moped wounds seeping blood and a half-remembered fact that sharks can taste and hone in on blood from 800 miles away.  Or something.  My moment of calm in the Big Blue evaporated and, with an imagined razor-toothed maw torpedoing toward me,  I splashed breathlessly back to the safe confines of St Paul’s.

I didn’t visit the beach at the northern end of the bay in the 80’s but from memory it was deserted: no beach umbrellas, no friendly dog, no plump children, no disembodied limbs.

But neither did it have one of the nicest tavernas I know.  Jim and I returned here most days for perfectly ripe Greek Salad with crumbly, salty, perfect feta; hot, crisp, perfect calamari; or warm, garlicky, puffy, perfect pittas served with dollops of perfect taramasalata, tzatziki, hummus and baba ganoush (all four as unrelated to supermarket tubs as I am to the Duchess of Windsor).   As you might have guessed, I thought it perfect.

On the slope behind the taverna is a nicely tended, terraced vegetable garden and I envied the customers who, later in the year, would bite into tomatoes, aubergines and cucumbers plucked metres from their table.

Should you ever visit Lindos, make sure you walk down to this taverna.

I don’t know its name but don’t worry you’ll find it easily enough.  Just head down to St Paul’s Bay.  The restaurant is next to the enormous dog resting her muzzle in the salt water.

One day, tiring of the Lindos crowds (and too chicken to rent a car and drive on Greek roads), we took a taxi to the small, inland town of Asklipeiou.  There isn’t a lot to do in Asklipeiou other than sip iced coffee; pay €1 to enter the stunning Byzantine church,  whisper our awe over the wall paintings;

and dawdle over a slow lunch, with maybe a cold beer.  And then maybe a second. 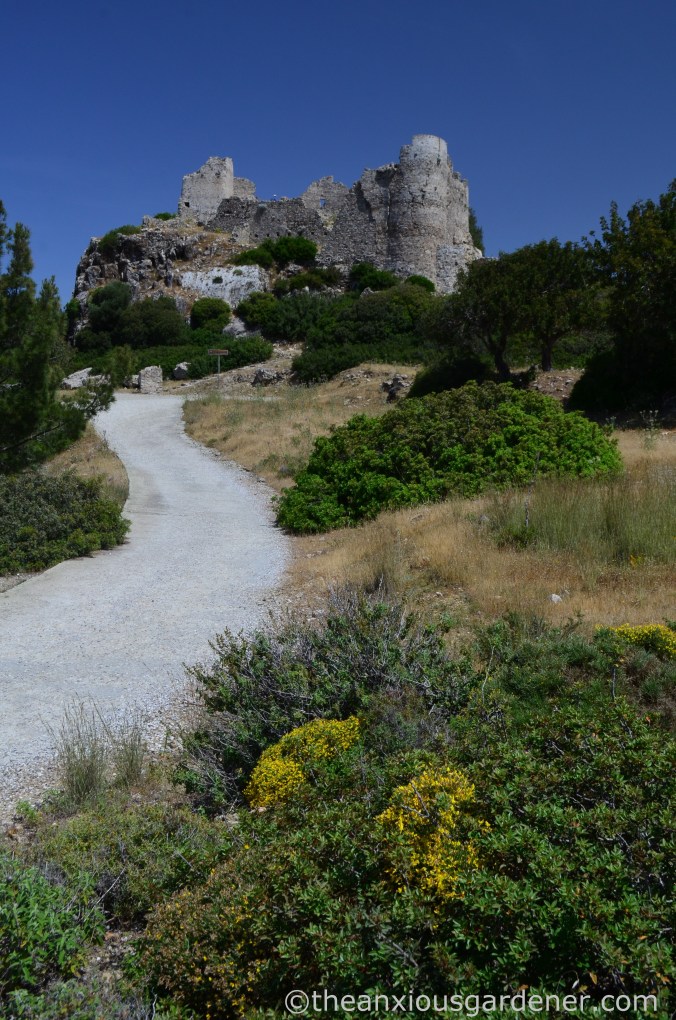 Afterwards, we climbed a steep, dusty road (in 33º heat) to the Castle of Asklipeiou, above Asklipeiou.  (I’m repeating the name Asklipeiou simply because I suspect you have no idea how to pronounce it.  Asklipeiou.  I could have made it easier for you by providing the alternative English spelling, Asklipio, had I been so minded). 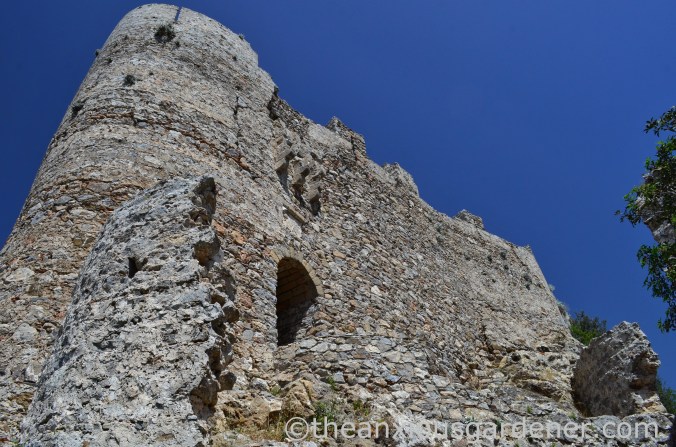 The castle was deserted and, after the hubbub of Lindos, deliciously quiet save the hum of insects and my laboured, beery wheezing.  We tried to imagine the lives of the Knights of St John who built the castle in the C13th; many of whom were English.  It was hard to imagine men from Gloucestershire or Sussex living and dying in this alien, often violent landscape.  They won’t have missed mud.

Greece has little money for the upkeep of her architectural treasures – nor much money for anything – but without information boards, an entrance kiosk or café, the ruin was all the more charming; if heart-stopping for any health and safety executive.  There were no no-go areas, no railings, no warnings about loose masonry or imminent death by falling. 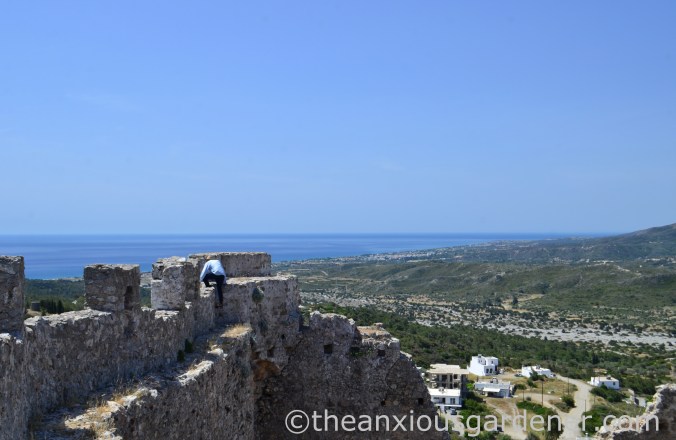 Jim took that as a challenge and clambered about the crumbly walls, precipitous falls all about, with fat cracks in the wall beneath his feet.  I watched from between my fingers. 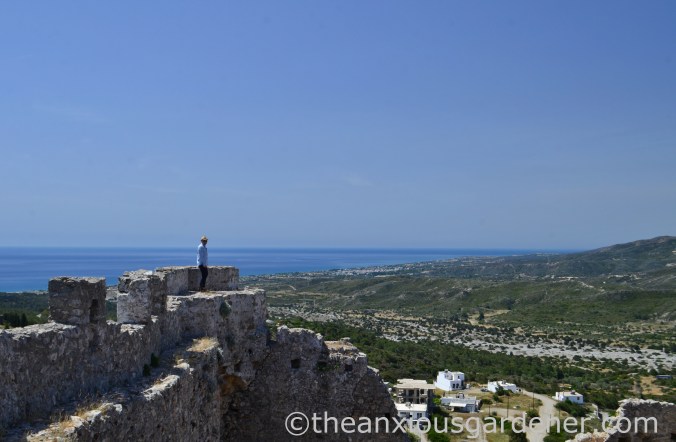 As we explored, bickering over reckless castle climbing and squinting at the views, I recoiled at a sudden hit of noxious smell.  After glancing suspiciously as Jim – who denied, as usual, any knowledge – I followed my nose.

Dracunculus vulgaris was the culprit … and I apologised to Jim. 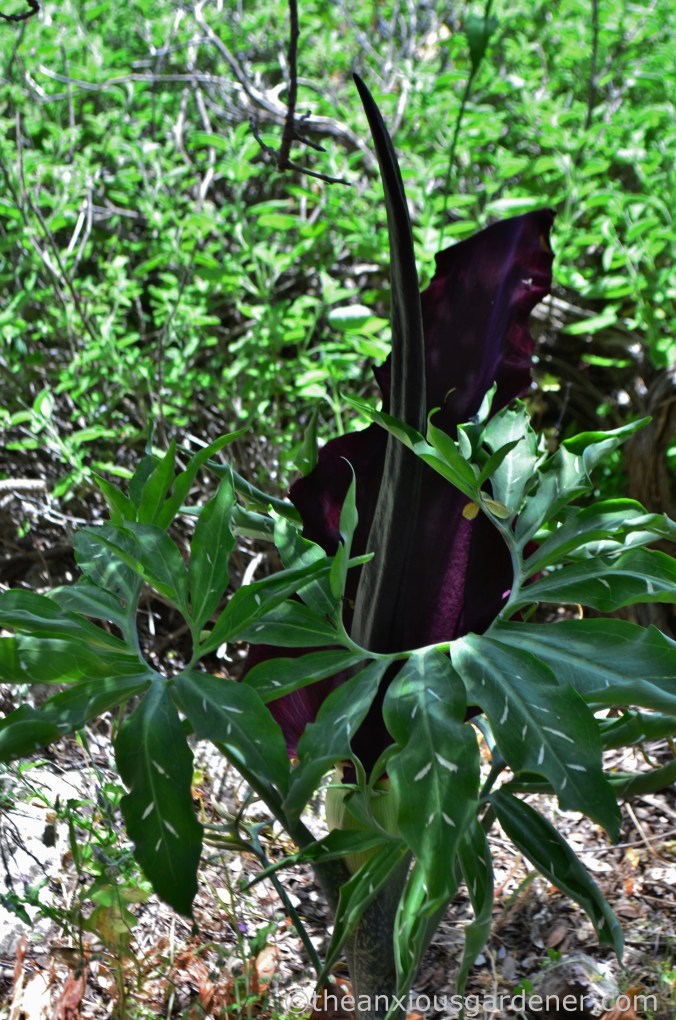 The dragon arum is very stinky.  I had assumed, at second thought, that a goat had fallen from the castle walls, its carcass baked by the sun.

And that is the best description I can give for the scent of Dracunculus vulgaris.  Next time you sniff something rotten in Greece, it might be road-kill or it might be this extraordinary lily.  Enjoy (but best not plant one under the kitchen window). 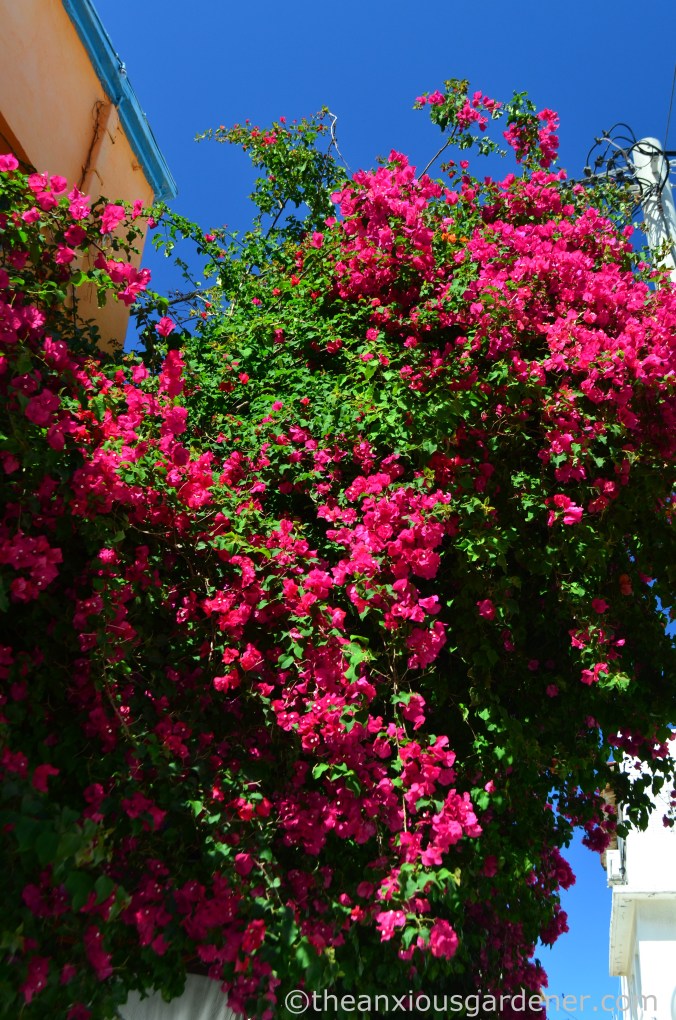 Anyway, what was meant to be a postcard from Lindos has grown into a multi-paged letter, with tiny writing.  I’ll finish off with some pictures of less noisome, ubiquitous plants:  Bougainvillea; 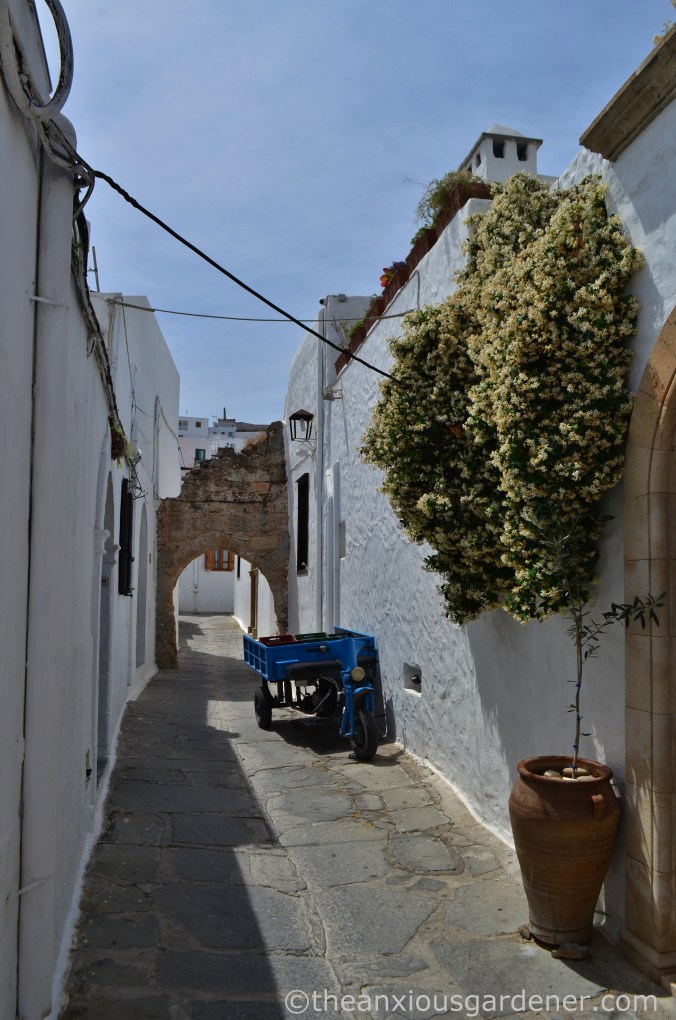 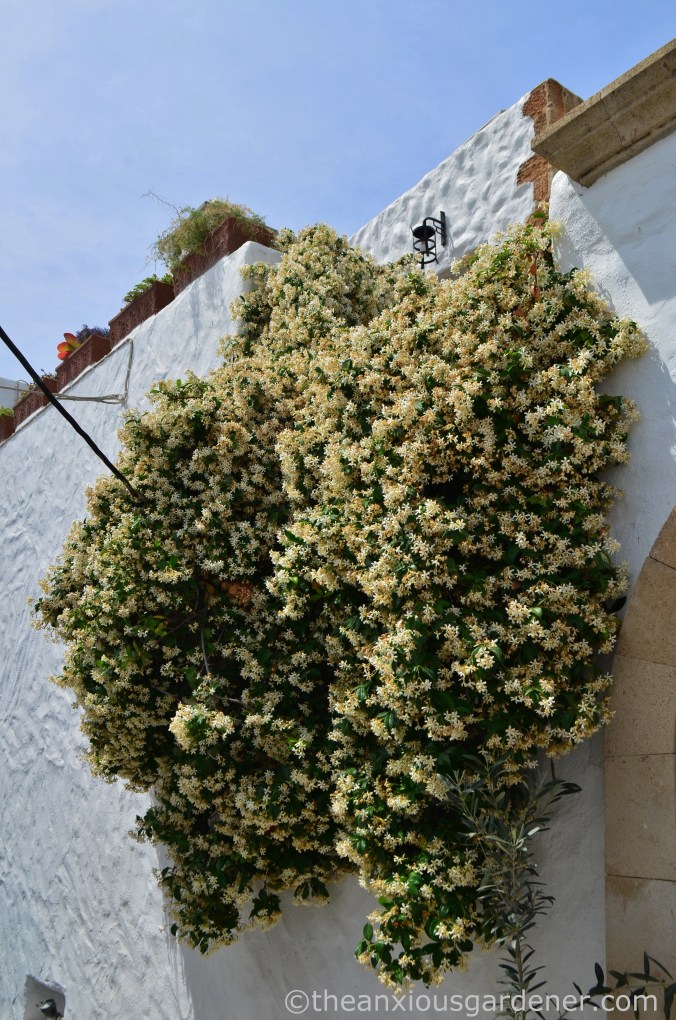 swamping the lanes of Lindos with a more delectable perfume. 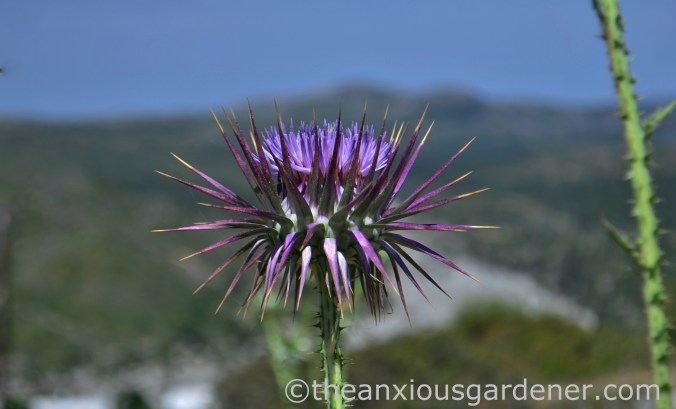 I fell in love with Greece absolutely as a young man and it lures me back time and time again.  But I don’t suppose I shall return to Lindos.  As special as it is to me, it is too busy, too touristy for my 2017 self.  On our next visit, Jim and I will stick to our abandoned independent travel plan and revert to adventurousness: fly out, make plans on the hoof, hop amongst the islands perhaps or journey across the mainland, eat a lot, drink some, fly back.  But that’s a trip which will, I’m afraid, result in a far, far longer postcard. 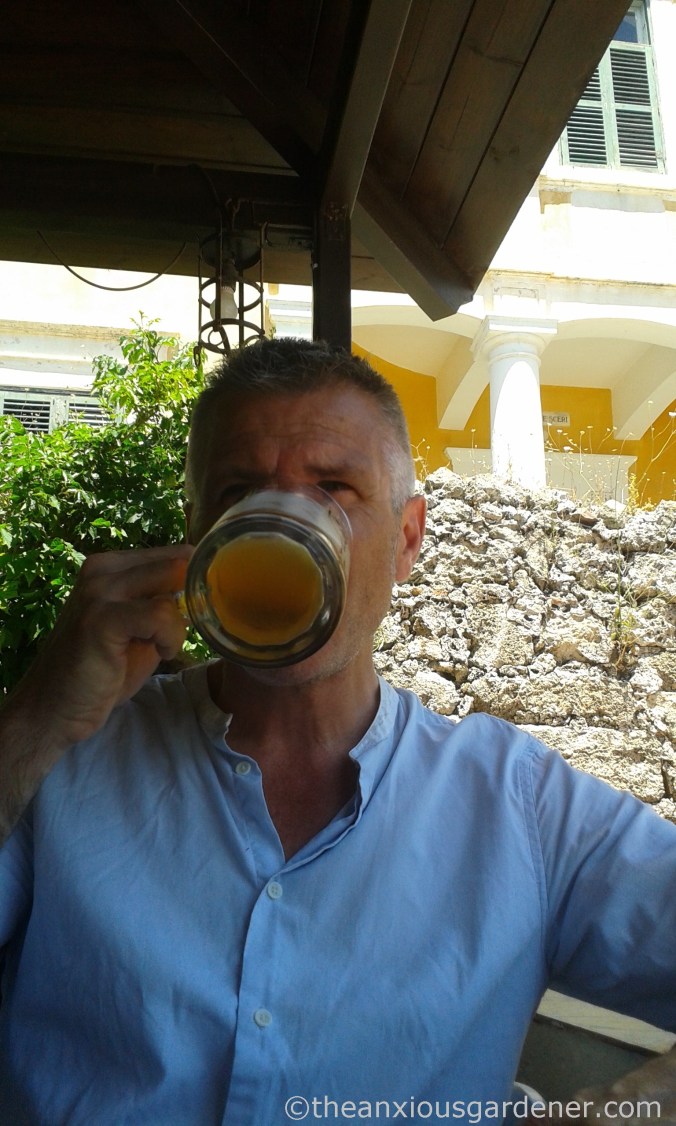 46 thoughts on “A Postcard From Lindos, Rhodes”