We had to get away. There was only so long we could bear living in our squalid new house. However excited we were at finally moving to Gloucestershire and living on the canal, our new home was undeniably squalid.

Moving-in day last August was all sorts of emotional. We unlocked the front door to our forever-home only to be smacked in the nose by the stink of the previous owner’s smoking habit – a forty-four year, sixty-a-day habit. The house had been empty for nine months, the windows shut tight, that noxious smell maturing fatly over a hot airless summer.

Jim and I spent two days filling a skip with noisome, sticky carpets and badly made, nicotined shelving units; and then we set to: stripping wallpaper, sugar soaping walls, ceilings and woodwork. If it didn’t move it got sugar soaped. And then we began painting. If it didn’t move it got painted; all the while hosting plumbers and plasterers, electricians, a floor sander man and a steady stream of curious, aghast (if trying not to show it) friends and family. But after six weeks of hard graft, Jim and I crumpled and fled to the South of France. I mean, you would have done so too. Whilst we were away we had the old central heating system ripped out and a new boiler, radiators and under-floorboard piping installed. Call us soft lads but we couldn’t face living through all that disruption as well.

Arriving at our rental apartment in Marseille, in those dying days of September, was like a warm tight hug. The little flat was clean, it was comfortable, it was uncluttered and it didn’t smell. And Marseille, which I’d never visited before, was far more beautiful than I had supposed.

On the fourth floor of an ancient block, our home for a week had brilliant views; 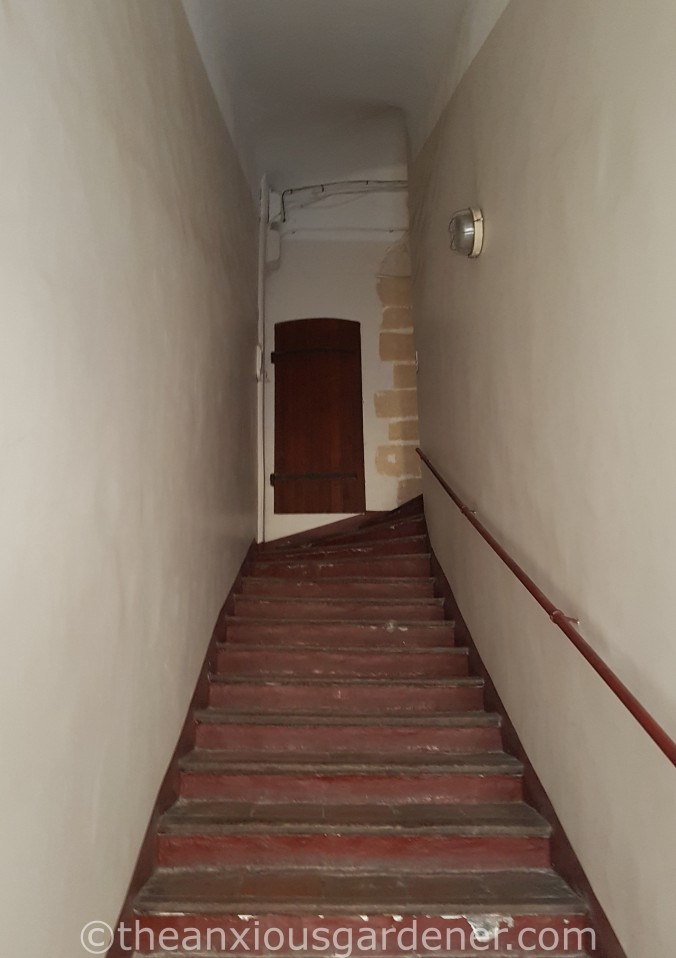 but at a price of 96 sixty steps, no lift. Nip out every morning to fetch croissant? 96 steps back. Reach the pavement only to realise that you’d left something in the flat? 96 steps. Return after a night out? 96 steps. I learnt to take them two at a time. 48 steps were less of a personal affront. 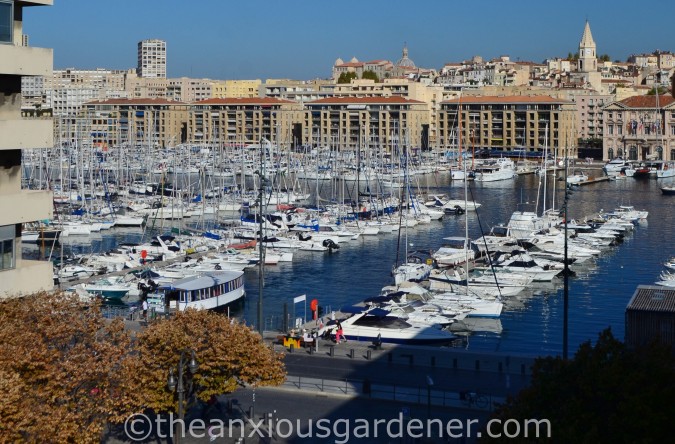 From the living room window, we looked down at the Old Port to our right; 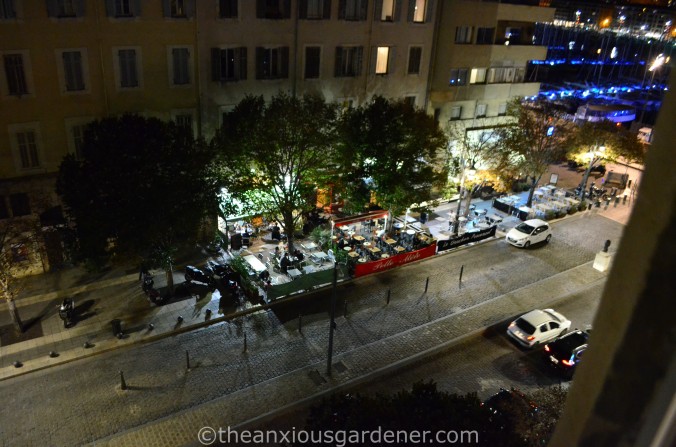 directly below us were restaurants and people to watch; 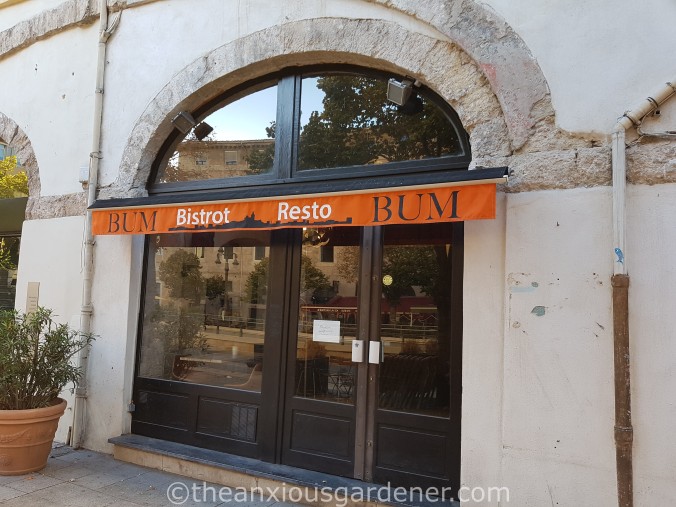 (though the restaurant opposite didn’t appeal much); 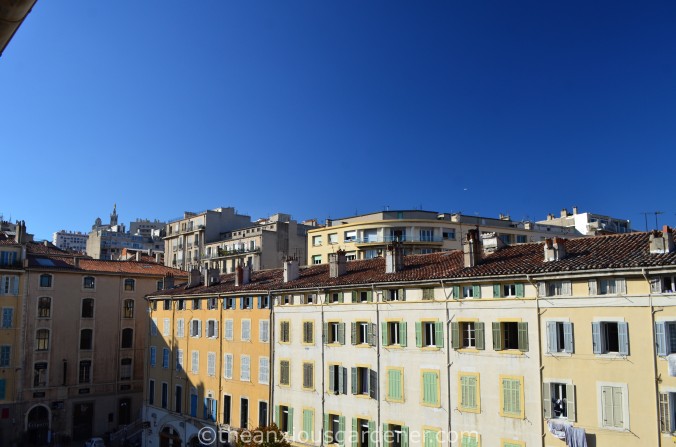 whilst to the left, marched a handsome line of mute-colour apartment blocks and rooftops,

with high up on the skyline, the Basilica of Our Lady of the Guard or, if you rather, la Basilique Notre Dame de la Garde.

One evening, we climbed several steep streets and long flights of steps to the church (so you don’t have to). C19th Romanesque architecture isn’t my cup of tea really but it seemed churlish not to take a closer look. High on the tower is a gigantic, golden statue of Mary and the baby Christ. Because that’s what Jesus would have wanted?

Still, the views are definitely worth the climb.  Swivelling, I looked out over the city as the sun slipped away, hankered after ferries slipping off to Corsica or Sardinia, and listened to a hundred bars calling out my name.

A cycling view back to the city from the President John F. Kennedy Corniche

Over seven days, we walked Marseille into the ground. But we also used the brilliant Le Velo cycle hire. Pay a Euro to register, use an app thing, get a code thing, tap it into a keyboard thing at a bike station thing, take a bike, use it, then leave it behind at any bike station thing. The first half hour’s bike use is free and then it’s one Euro per additional hour; which is my kind of bargain. We zipped about daily, exploring and sightseeing – even though Marseilles, unlike Amsterdam or Berlin, is not a cycling city for the not-quite-ready-to-die-yet sort. 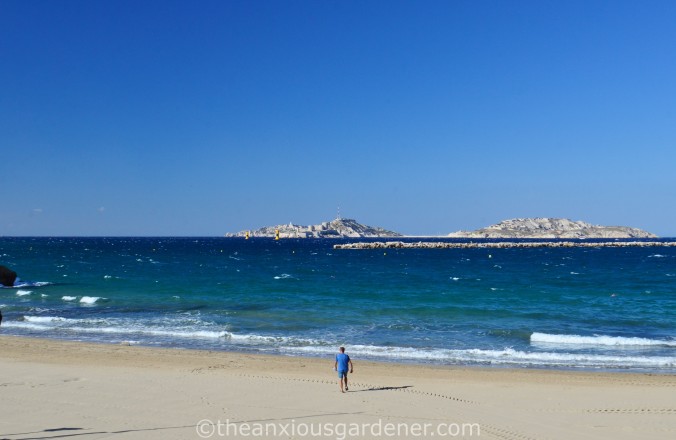 One day, we followed the coast road south, stopping to look out over the Frioul Islands and deciding we would visit them. (And we did and I recommend that you do so too, but I can’t include all of our jaunts in this post or else we’ll be here all day).

War Memorial on the Corniche Marseille

The beauty of cycling is that you can just stop, almost anywhere, without worrying about where to park or which bus stop to use. And we did that often – just to catch our breath, to chat, or to gaze at a nicely framed moon above a splendid melodramatic bronze.

Stick me on a bike and I’m pretty happy. Give me a bike for virtually nothing and I’m happier still.

I decided to cycle to the Jardin Botanique – given that I do like a botanical garden and I do write a gardening blog (mostly). But having risked the murderous disregard of some drivers and cycled a jolly long way indeed, we skidded to a breathless halt at very shut gates. “Damn!” wasn’t the word I used. 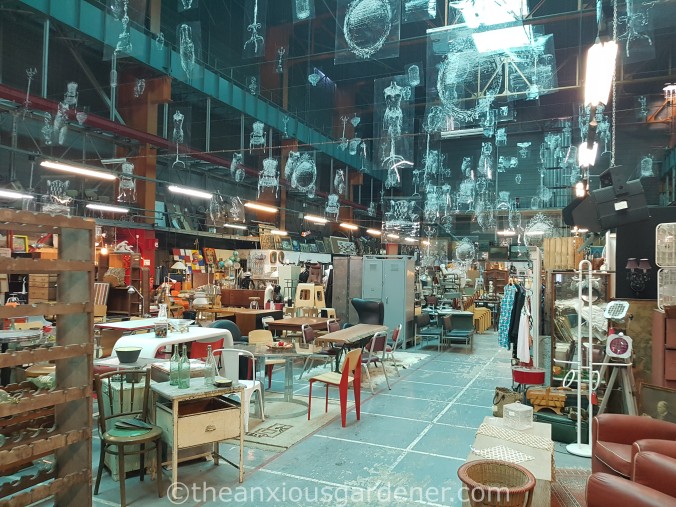 So instead, we went to a huge antique/flea market – which is as magnetic to me as a closed botanical garden. 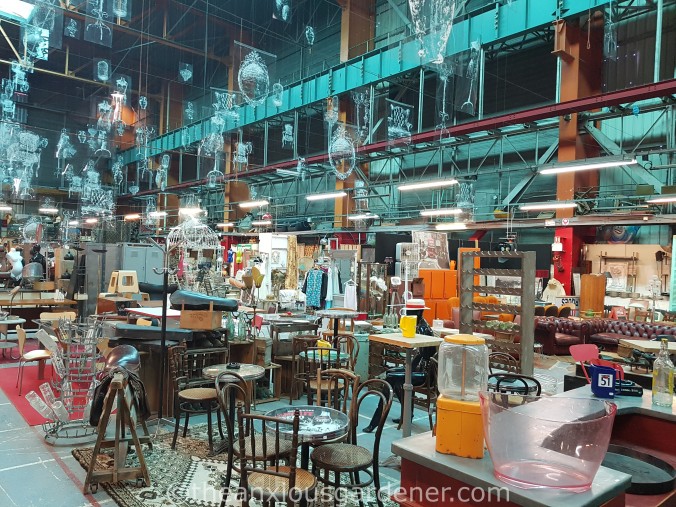 We hunted high, we hunted low, we browsed and we rummaged. But given the constraints of Easyjet cabin baggage allowances, we didn’t buy anything.

I wasn’t surprised that this disturbing doll hadn’t sold. Were it in my house, I wouldn’t take my eyes off it. In case it moved.

And if this fellow appeared at my front door, I’d immediately pound him to bits with a cricket bat. And feel no remorse, just mighty relief.

If the botanical gardens were closed, then simply wandering the streets of Le Panier, a neighbourhood to the north of the Old Port, was a charming horticultural substitute; 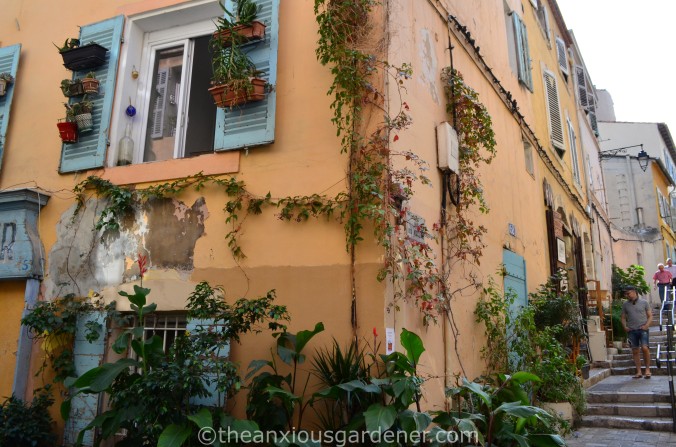 and I enjoyed sticking my nose into the homely, sub-tropical displays and muttering forlornly about my lost tropical border at The Priory.

Perhaps on reflection, it’s just as well that the botanical gardens were closed. I know from sad experience that Jim can’t always be trusted in an open public garden. (You may have to enlarge the photo to get my point). 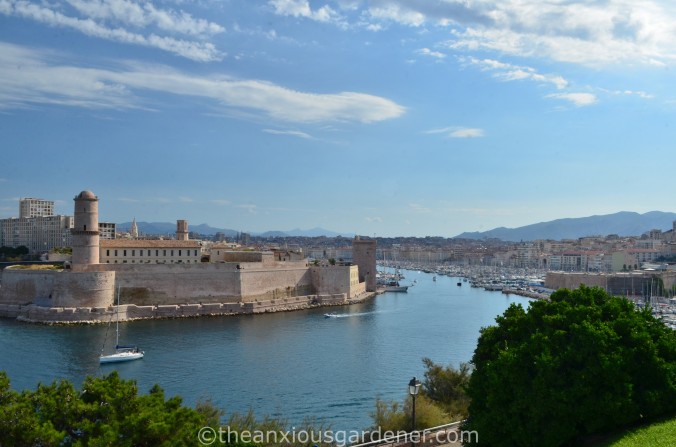 As much as we loved Marseille, its history, charm and solid good looks (why, we even became accustomed – almost – to the regular wafts of urine from side streets and alleyways) after several days we needed to escape the noise and crowds. And that smell of wee.

An hour’s bus trip away and we were in the Parc national des Calanques. From the bus stop, it’s another hour’s walk under sweet-smelling pine forests, on gritty paths,

until we glimpsed the sea.

Jim’s brother had recently been here and urged us to come. Good call. I’d have walked two or three times further to see this. 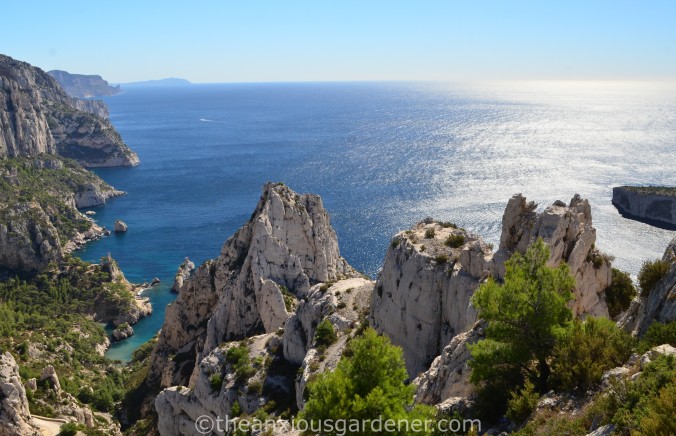 It is magnificent and, for a place I had never heard of, quite startling. Who knew? (Apart from Jim’s brother). The views tumbled away into the haze,

and down to rocky coves and inlets. (If you don’t fancy the bus trip and hot walk, join a boat trip from the Old Port in Marseille).

until we realised just how high we were and how low it was. We grimaced at the thought of a long descent, followed by a punishing climb back in 30°+ heat. Call us soft lads again. 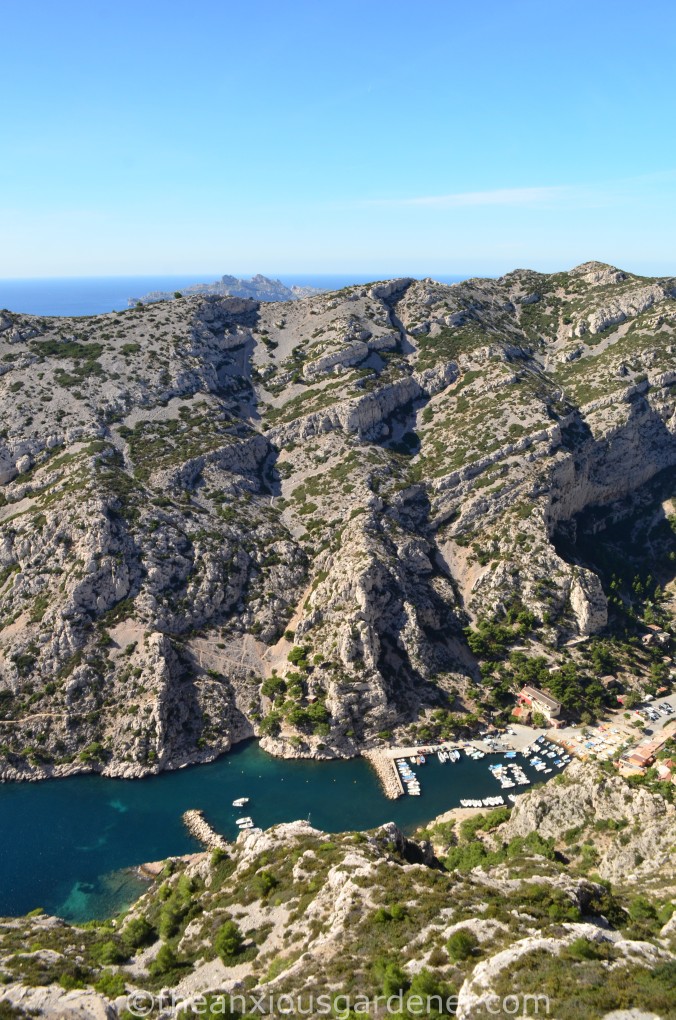 And that scene from Ice Cold in Alex – auto-playing in my head – faded away; along with an imagined seafood platter to go with icy beer. Holidays can be so cruel.

Jim having a disappointed moment

Dry-mouthed and hungry, we drank warm bottled water and ate warm plums and oranges – which was nice if not quite the same – and watched spellbound as climbers crawled up that massive rock face.  (The climbers are visible by Jim’s elbow and at the foot of the cliff in the enlarged photo).

But please don’t fret about me. I did get my seafood lunch with beer. Indeed I had several. The bouillabaisse, the mussels, the mixed crustacea were fabulous (though Jim couldn’t bring himself to eat a whelk. He did try pulling inches of an elasticated, rubbery body with its attached toenail-like thing, from the shell but, groaning and shuddering and grimacing, passed it to me. Gee thanks, Jim).

As is traditional at the end of one of my postcard posts (having done it once before), here’s a photo of me enjoying a final beer.  But I’ll pass on the whelks next time.

Lunchtime beer quickly became a distant memory, as we returned to painting window frames and planing doors that didn’t shut properly, putting up shelves, moving in our belongings from the storage centre piecemeal as rooms became habitable, making endless decisions about power points, light fittings, taps, rugs, new furniture and all the rest.

Oh, and yes, we had to tackle the overgrown garden too. But that’s a tale for another time.

57 thoughts on “A Postcard From Marseille”