Beautiful but slightly eerie mist greeted my arrival at work this morning.

I normally have a handful of chores to carry out on arrival but this morning the first thing I did was to grab my camera.  The reflections in the pond were screaming out for attention. 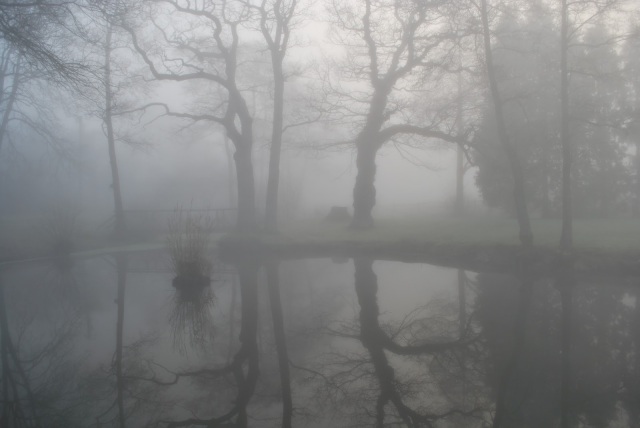 Last year, after I had finished building the compost bins I used the leftover scrap wood (and some old roofing tiles) to make five nestboxes; four for tits and one for robins/flycatchers.  Only two of the former were used and due to rubbish siting, the latter was sneered at by the resident robin population.  I did though put them up fairly late (about February) so I am hoping for a better take up rate this year.  I’ve moved the robin box to a very up and coming area (trendy, lots going on), so they should be queuing around the block this year.

During last summer, whilst a pair of blue tits were raising a second brood, a grey squirrel gnawed into the box and ate the young. Nasty, foulbreathed, twitchy-nosed miscreant.   I have heard similar stories before but never experienced it.  A few year’s ago my Dad-in-Law, took great delight in watching a clutch of wrens being raised in a nest box on his garden shed.  That is, until a magpie raided it and ate all the babies.  So today, having made a new  (fifth) tit box, I fitted them all with steel plates that guard against squirrels, magpies etc enlarging the hole and chowing down on the young.

They’re a little rough and ready, or as I prefer to call them – Rustic Chic. 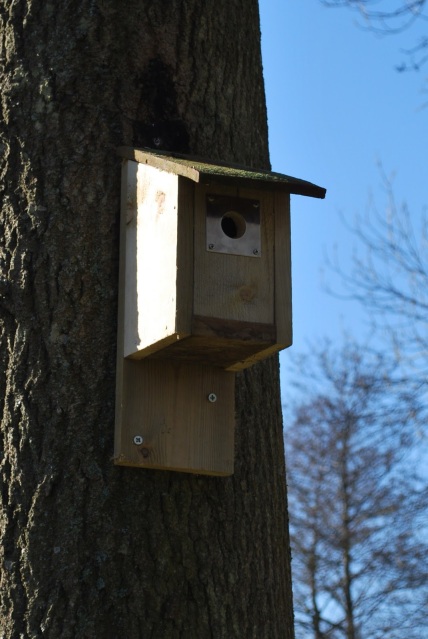 By the time I’d finished faffing about with the boxes, fixed a broken fingernail and reapplied my lippy, the sun had burnt away the mist and it was a perfect spring (only in February) morning.

I finished off hacking back and tying in the large climbing roses (abandoned in a bloody huff a few days ago) on the rose tunnel and it was pretty much time to pack up for the day.

Really chuffed that the crocuses I planted in autumn 2008 are flowering and increasing in number.  This is just one variety (Firefly) planted on this slope.  There are another four – all with slightly differing flowering times. Last autumn I planted a further seven varieties in various other parts of the garden.