All that heat and all that rain has allowed the grass to romp away.  It has been growing so quickly that ideally I should’ve been mowing it twice a week.
But that simply isn’t possible given my time constraints (and indeed my energy constraints).  It does mean though that when I do mow it takes me far longer than usual.  There are more clippings to collect and empty 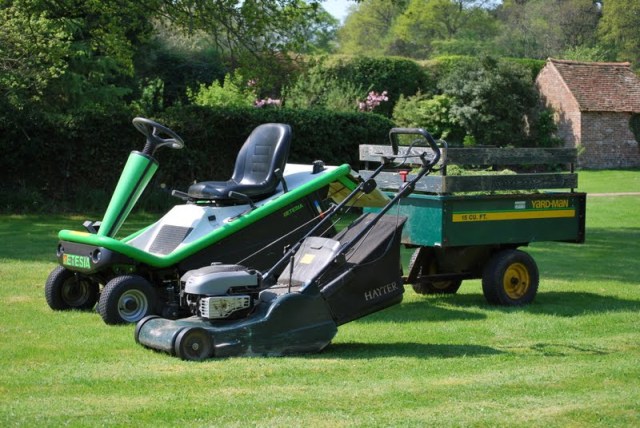 into the trailer and then more trips all the way out to the compost bins.  I’ve been so busy trying to keep on top of the mowing, I’ve barely had time to just stop and breathe and look about me.  Little time to walk about the gardens with my camera glued to my eye (not literally).  But over the past couple of weeks, I have managed to collect a few shots.

Badly placed beneath (and locked in a life or death struggle with) a winter flowering jasmine is this Rose Rosa Mundi.  It’s a very old variety (sixteenth century) with a delicious scent.  The fact that it doesn’t need spraying (which I never do anyway) is also hugely in its favour.

of this very pretty and very nice smelling climbing rose/rambler.  Margaret, the farmer, kindly took a cutting of it to the Wych Cross nursery (a fantastic rose specialist in the Ashdown Forest).  But the jury is still out as to which variety it is.  If anyone knows its name, I’d be grateful. It only flowers once but it’s a great show.  And again no need to spray, ie it doesn’t suffer from rust or blackspot. 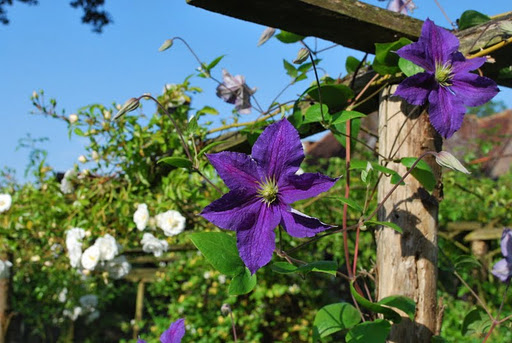 Along the tunnel, I’ve planted several clematis to augment the rose.  Here is Clematis ‘Wisley’.

and here, above a froth of Alchemila mollis flowers, is Clematis ‘Warszawska Nike’.

Lots going on in the kidney beds (Margaret’s fields beyond).

along with another survivor – persicaria,

with a yellow achillea behind

merging in with a real favourite of mine, Crocosmia ‘Lucifer’

and this Campanula lactiflora which is settling in well, in this its second season.  I think it is ‘Pritchard’s Variety’.

Verbena bonariensis never fails to do what is asked of it.  As long as you ask it to flower, that is. 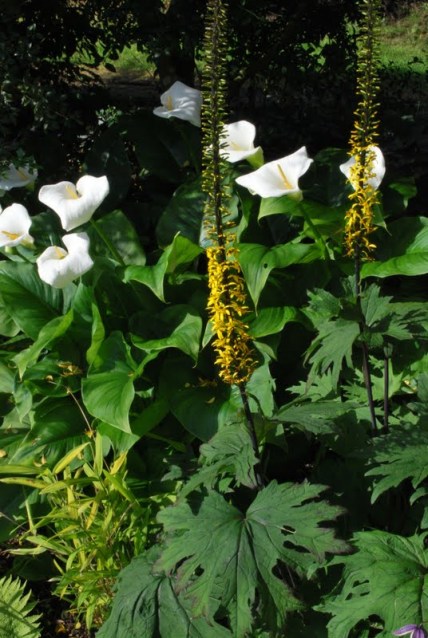 Elsewhere, I’m really pleased that my Ligularia przewalskii has flowered for the first time, with arum lilies (Zantedeschia aethiopica) behind.

All these weeks later, the rose pictured in

I grew these from seed last year – worth the wait.

This lily did turn out true.  I grow it in a pot with tulips (shown in ‘Blooming Priory’).  Behind on the wall of the house is the only clematis growing in the garden when I started here.  Looks like Clematis jackmanii.

Planted along the edge of this path is Erigeon karvinskianus, Mexican fleabane.  It only went in last summer but should quickly self seed into more cracks in the paving.  I’ve already dug up some self-sown seedlings and put them elsewhere in the garden.  Behind the fleabane is bergenia (yawn – but looks a lot better if you cut off all the leaves in Spring.  This shows off the flowers better and rids you of all those horrible brown, tatty leaves) and behind that is yellow loosestrife (Lysimachia vulgaris).

Here is an idea I shamelessly and wantonly stole from a good friend of mine.  A frame of box hedging surrounds a ground cover of heuchera.  In the centre he had planted an olive, whereas I’ve put in a standard Viburnum tinus ‘Eve Price.’   Behind, planted in a small raised brick bed is campanula.  Fairly gaudy but sort of works; perhaps more so without the heuchera flowers.

The heuchera was actually planted more for its intricate veined leaves than for its flower colour.

Lots still happening in the garden then, but sometimes I think maybe there’s just too much happening. Too much going on.  Part of me (a small part admittedly) yearns for that first sharp frost and an end to mowing and staking and weeding and deadheading.  And instead, a start to bonfires, the raking up of leaves, the spreading of mulch and good honest digging, the chopping of logs, toasted crumpets, woolly hats and afternoon black and white films (‘Brief Encounter’ perhaps, or ‘Random Harvest’ again).  I know that’s wishing away Summer but plants often seem just a little too needy.  A little too demanding.  Or is that just me being a grumpy old curmudgeon?

9 thoughts on “A Walk About The Priory”