On the west lawn at the Priory is a laburnum tree (L. anagyroides).  I’ve never been a big fan of laburnum: a small tree usually growing in suburban  front gardens which bursts into yellow bloom in Spring – and then fades away again for the rest of the year. 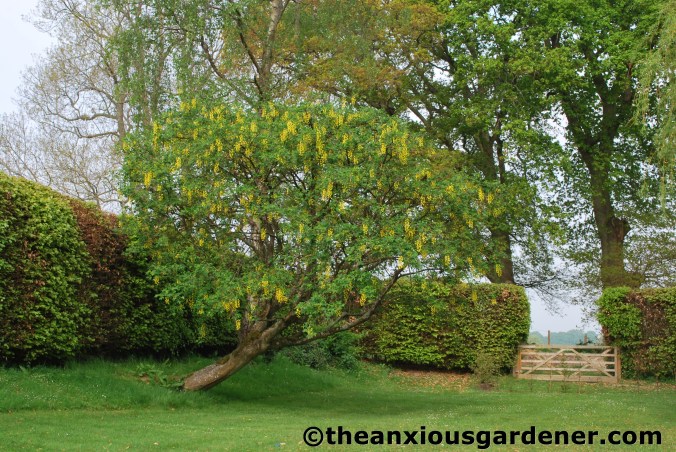 But our laburnum  grows out of a bank, beneath the beech hedging, at an alarming angle. And for that reason alone (it doesn’t flower very impressively), I’m rather fond of it.

Look closely underneath the tree and you’ll notice that the lawn hasn’t been mown properly.  Good for nothing gardener, you might think but for once I have an excuse.

There’s a wasp nest, you see.  As I discovered the other week when I mowed over it.  Suddenly there was a salvo, an eruption of wasps about my head.  Being of a temperate and manly disposition, I shouted a word of warning to anyone who may have been in the vicinity and then strode quickly but calmly to one side (He shrieked like a twelve-year-old girl and trampled an elderly dog walker and toddler in his haste to get away – Ed).  I had to wait two hours for the annoyed swarm to calm down so that I could gingerly retrieve the mower.  Remarkably, I didn’t get stung. 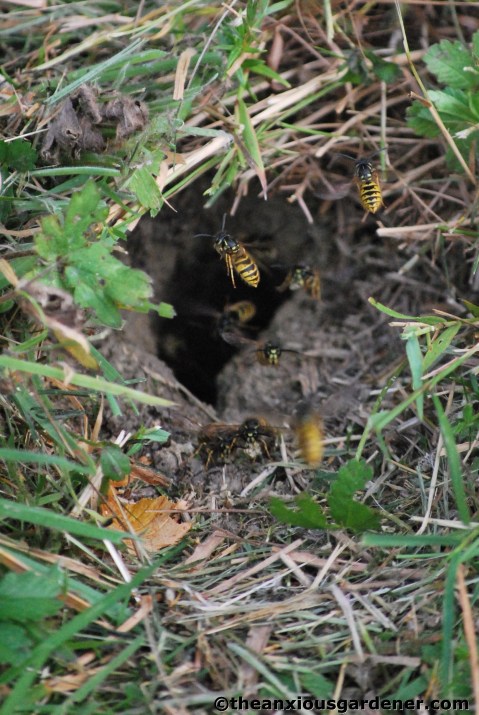 I’ve found by mowing around the nest we can live in waspish harmony.  A bit of longer grass under the laburnum and hey, I don’t get hurt.  Good deal.

Underground wasp nests are generally in an abandoned mammal hole or a natural crack in the soil but by studying the needle-bottomed ones, I could see that they were carrying out crumbs of soil.

They might have inhabited an old hole but they were enlarging it.   Certainly the hole has grown larger and larger.  What are they doing down there?  What are they making?  What are they building?  Perhaps it’s best not to know.
You don’t really get a sense of the waspishness of a wasp’s nest from these photos, so I’ve made a video clip.  I wasn’t sure how to go about doing this (uploading and all) so I spent a long time learning how to reformat, edit and the rest.  I’m not sure it was worth all that effort and – as I used my mobile phone – the quality isn’t great.  Apologies.
I got stung immediately after taking the video.  So no, I’m not sure it was worth it.