A few weeks ago, I wrote about the compost bins at the Priory (see “Composting the Priory“) and was inundated with one request for more information on how I built them.  So, for what my carpentry skills might be worth, here we go. 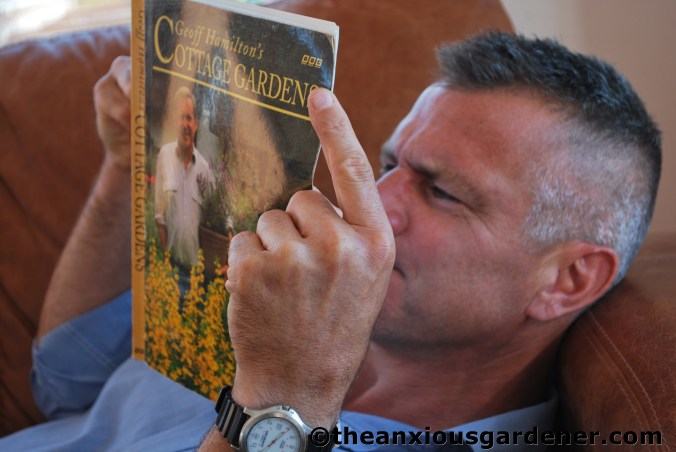 A couple of years ago, I picked up a copy of Geoff Hamilton’s ‘Cottage Gardens’ in a charity shop.  And within this lovely book, I saw his design for a rose arch and decided that I would build one in our garden.

Here it is (after a rust infested R. Iceberg was removed from the right hand side).  The success of my rose arch gave me the confidence to build two wood stores, a couple of simple garden benches and compost bins.  The ‘bins were very loosely designed around the concept of the rose arch.  Four posts (7cm x 7cm) are sunk into the ground and boards simply nailed to the posts to make a three-sided box. 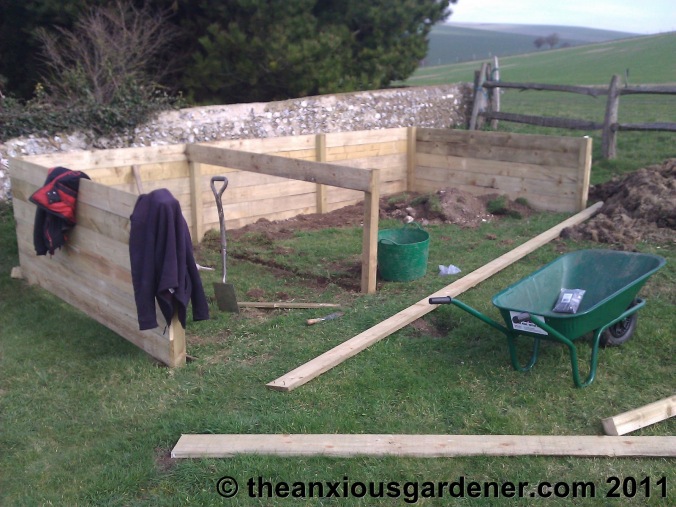 Add two more posts within the box for each additional bin.  Make as many as you can and more than you think you might need.

The boards I used were 15cm wide and 4.8m long: the length actually determined the width of the bins – I simply divided the length of one board by three which gave me three bins, each 1.6m wide.  A board cut in half gave me the depth of the bins: 2.4m.  Six boards nailed to the posts made bins 90cm high.  You may, as I did, over-engineer the fixing of the posts into the ground and use post spikes.  These are long spikes that you first hammer into the ground, with a square bracket at the top that holds the posts.  BUT they are a pig to use.  They invariably twist as they go into the ground and as they must stay square, this is a real pain.  Also it is very hard work sinking them into the ground.  So don’t use spikes.  Do as I did at the Old Forge and just dig a hole two feet deep for each post and then back-fill with hardcore and postcrete (a ready-made concrete mix). 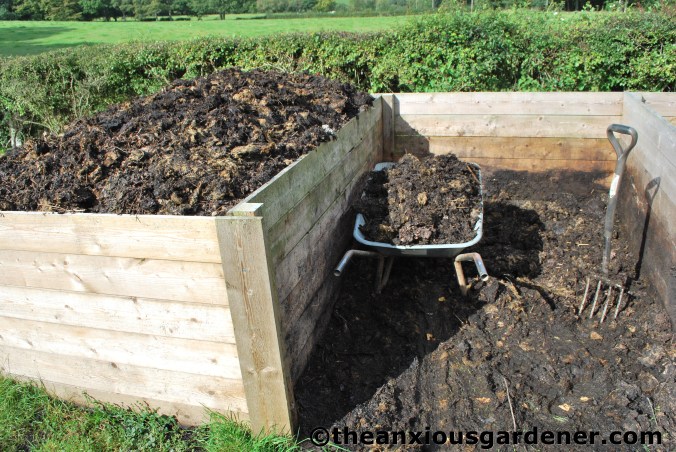 The bins I’ve made for both the Old Forge and the Priory are very big but that is because they must accommodate a ride-on mower and trailer.   Make yours to a size that suits; in my own garden, the bins are 1.5m wide but only 1m deep.

Back view of the Priory bins

I planned to build two sets of three bins at the Priory and realised that if I spaced them correctly, I could have a seventh bin formed from the gap between the two.

Finally, screw or nail a batten to the front edge of each post at the front of the bins (the red piece of wood above) and to that, attach a vertical length of planking equal to the height of the bins.

Here’s a close up of that arrangement with one of the front boards shifted slightly out of position. 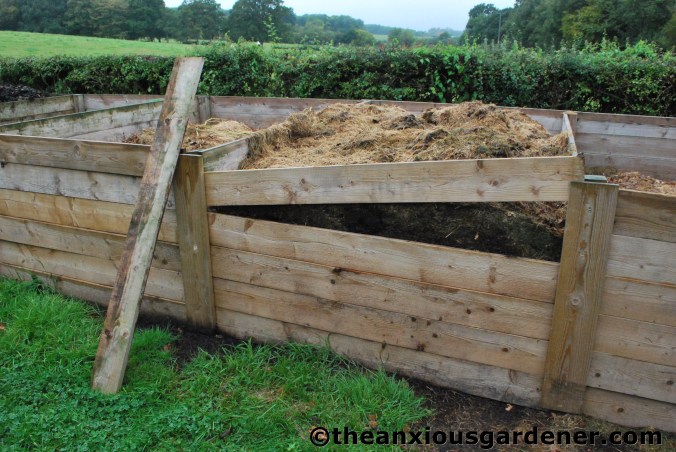 You can then cut six planks to slide down the front of each bin.  Strictly speaking you don’t need to do this but it does increase the amount of compost each bin will hold without spilling out of the front. Site your bins in the open, not under trees: you want rain to fall on them.  Build them on level ground if you can – it’s far easier than building them on a slope.  And should you cover the compost?  I do.  It keeps in moisture and warmth; and keeps out weed seeds.

And that’s it.  If anything’s not clear – please say.

I love my compost bins.