With my gardening enthusiasm washed away by heavy rain, here’s a post about something else.

On a sunny Saturday in September, I walked into Seaford to meet my friend Tracy for a day’s walk.   Whereas I prefer walking alone, Tracy is sociable.  Not only has she recently joined The Ramblers but she now leads their walks too and, having plotted a new route on the map, she invited me along to check its suitability for a large Goretex phalanx.  (On the big day, a few weeks later, she led 36 people on this ten-mile walk.  36!!).

We climbed the springy turf of Seaford Head at the east end of the beach and, swivelling, gazed over the town, Newhaven and, on the left-hand horizon, Brighton.

Despite this beautiful coast lying on my doorstep, I haven’t featured it on my blog before.  Which is odd given that one of England’s finest views is about an hour’s walk from my front door.

And here it is.  The Seven Sisters – a line of eight (!?) chalk hills abruptly sliced by the sea. 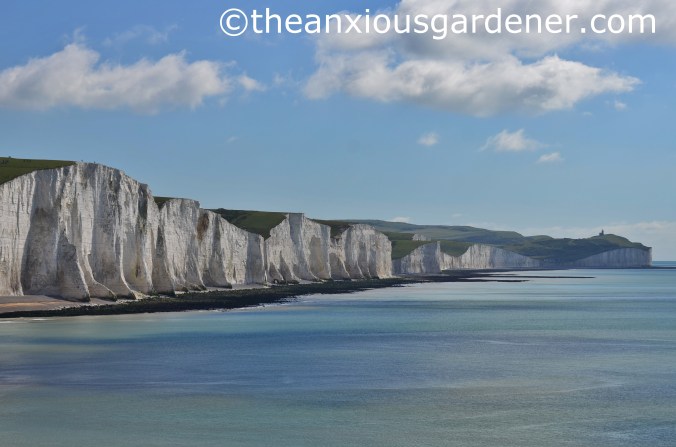 The Seven Sisters aren’t as famous as their Dover cousins but they’re whiter, far more striking and less built up.  As such they are often used as a cinematic and photographic stand-in for the (not as) white cliffs of Dover.  They also mark the beginning of the end of the South Downs Way, which hugs the cliff-tops for an exhilarating finale before Eastbourne.

It does worry me if visitors get too close to the precipice though – like those two on the crest of Haven Brow.  The cliffs are blindingly white simply because of repeated land-slip, collapse and bashing from Atlantic storms.  The cliff-edge is crumbly and fatalities, not all suicidal, are quite common.

The Sisters begin at Cuckmere Haven where the Cuckmere River cuts through the chalk to reach the sea beside a row of Coastguard Cottages.  No wonder it is a scene I have photographed before.

In November 2011, I took a series of photos on an afternoon dog walk.

For whatever reason I didn’t use the photos then.

But when I came across them recently 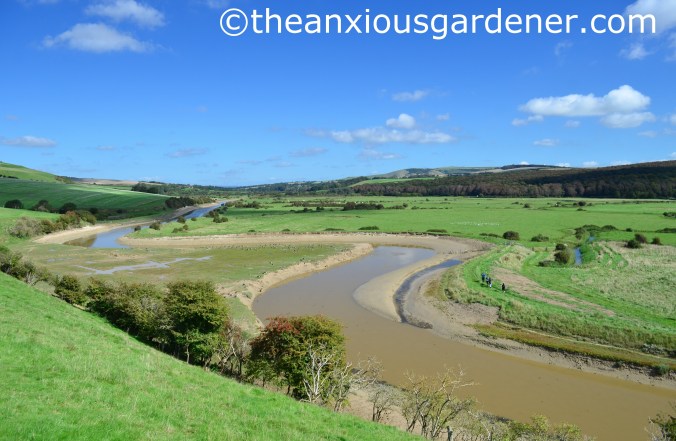 Tracy’s route lay inland after Cuckmere Haven and we avoided the ups and downs of the Seven (or Eight) Sisters.   Turning our back on the English Channel, we followed the west bank of the Cuckmere River north toward Alfriston.

Off to our right, on the far side of the valley, is enormous Friston Forest – a favourite haunt for me and my dogs over the years and where, as I have learnt, it’s all too easy to become embarrassingly lost. 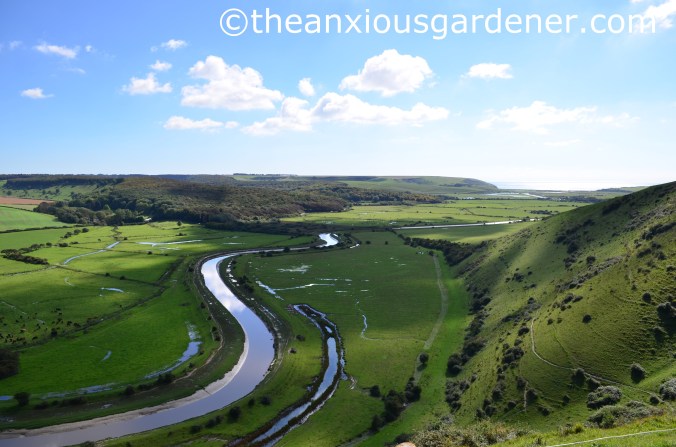 Tracy planned a detour for her walk, off the river and up High and Over Hill – a steep climb followed by an immediate return to the river.  As I had seen the view from the hill countless times, I suggested it might be an unnecessary, arduous addition and muttered mutinously when she insisted.   Grudgingly, I conceded she was right as we gained height to slowly reveal the meandering river

and ahead to Litlington.  I hate it when Tracy is right and I’m not.

The view back to the Haven wasn’t half bad either.

Before we dropped back to rejoin the river we glimpsed the impressive Rathfinny Estate vineyard.  This is brand spanking new but, I think, a welcome addition to the South Downs.  Rathfinny is continuing a long tradition of Sussex wine-making but nearby Breaky Bottom Winery has the better name. 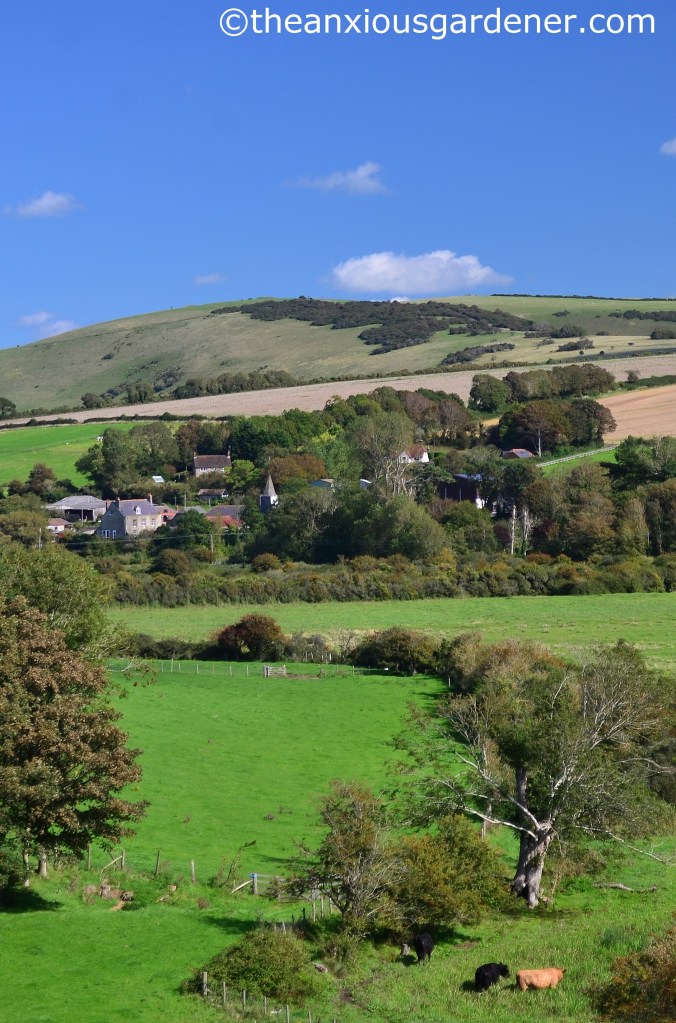 Litlington, which we now aimed for, wasn’t on our itinerary today – and that’s always a regret.  There’s a decent pub, The Plough and Harrow, a great tea garden as well as an independent plant nursery.  I used to work in the gardens of a Manor House in Litlington owned by a well-known musician – but I’m not going to tell you who. Irritating, huh?

Now on the east side of the river we by-passed Litlington and reached Alfriston opposite St Andrew’s Church with, next door, the National Trust’s first acquisition, The Clergy House. 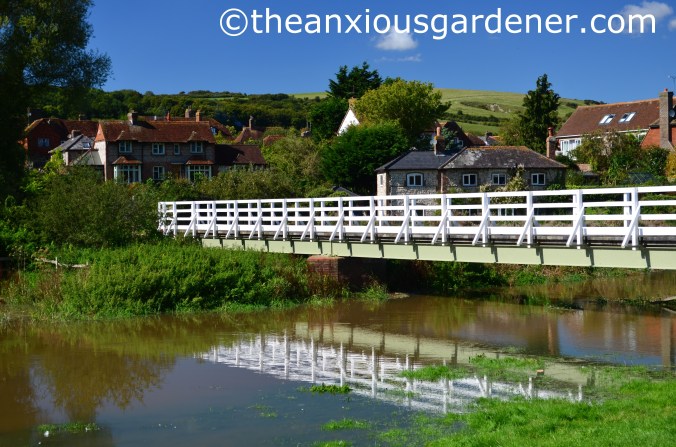 A handy bridge led is into the centre of the village.  Alfriston is as pretty a place as you could wish for – with the resultant crowds you might imagine.  But on a warm Saturday lunchtime it was surprisingly quiet and we grabbed a table in the beer garden of my favourite Alfriston pub:

The George, of course.  Unusually, my food wasn’t up to much but, after three hours hot walking, I was happy enough with a pint of cold shandy.

As if Alfriston isn’t quintessentially English enough, the Village Store underlines the point.  (I had to restrain myself from automatic weeding mode). 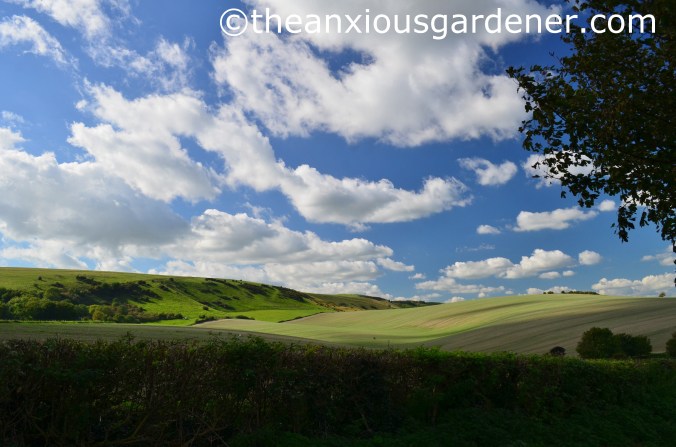 The Cuckmere valley winds through the north escarpment of the Downs and after leaving the village, with no more big climbs ahead, most of our walk was done and the remainder easy-going.

The ground flattened as we approached the tiny village of Berwick.

We paused at the church and tried the door for a peek at Duncan Grant’s famous paintings.  Sadly it was locked (and remained so however much Tracy rattled).  I was disappointed as I wanted to see his murals again.  From a previous visit, I remember being underwhelmed but I wanted to check whether I hadn’t been mistaken.  (Duncan Grant was one of the Bloomsbury Group from nearby Charleston Farmhouse).

Near the church is another favourite pub, The Cricketers Arms.  I say favourite but I haven’t visited for years and even though I demanded beer, held my breath, turned red and stamped my feet, Tracy grasped me firmly by the scruff of the neck and frogmarched me away.  Oh, well.  It was worth a try and it’s good to have an excuse to walk this way again and see those Grant murals.  (And visit The Cricketers).

The last couple of miles were fairly tiring across muddy fields, following a sometimes elusive path to the station.  Trains are once an hour and, if you arrive early like we did, there’s another pub The Berwick Inn next door.  It’s OK, I suppose, just not as nice as The Cricketers, Tracy.

(Trains to Seaford run from Brighton and Lewes; from Berwick, services are to Eastbourne or Lewes and Brighton.  Change at Lewes to return to Seaford).

46 thoughts on “A Walk From Seaford To Berwick Station”