The first frost has struck the Priory and the tropical bed wasn’t happy.  Dahlias were disheveled, discoloured and crumpled when I turned up for work (bright as a shiny new button) on Monday morning. 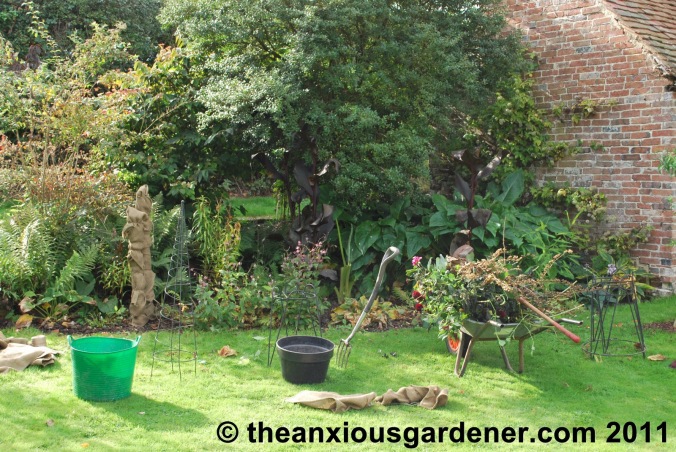 I bundled all that dahlia top-growth off to the compost bins and wrapped up the banana (Musa basjoo) in hessian.  This is a hardy banana and doesn’t really need winter protection.  But, if you don’t wrap it up, it will be killed off to ground level.

If you do protect the ‘trunk,’  when growth restarts in the Spring, it’ll start from the top of the plant rather than from the ground.  You will, therefore, get a bigger, taller plant, year on year.  I’d already moved some plants to the safety of the greenhouse – after all the frost was hardly unexpected.  A red banana and ginger lily are already sitting toasty warm under glass.

I also dug up my beloved Colocasia esculenta, potted it up and moved it indoors.  It performed pretty well this, it’s first, summer.  I did site it though up against a large clump of arum lilies and so it’s lovely big leaves were pretty much lost against theirs.  I’m such a klutz.
The dahlia tubers I’ve left in situ, under a thick mulch of leaf mould.  I do intend to lift and dry them in a week or two when I’ve got a spare moment.  Why not now?

Well, I’m going away for a few days.  We’re off to the Cotswolds.  And then on to walk 60 or 70 miles through the Forest of Dean and along the Wye Valley.  Visit family.  Visit friends.  See some sights.  Drink some beer – obviously.
Now that that pesky, beautiful Indian summer is over with, it seems like the perfect time to go and do some walking – in the rain and mud and cold!  I do know how to have a good time.

9 thoughts on “Away Awhile Again”