Sometimes I can get a little lonely working at the Priory and if I spot someone walking along the public footpath, I’ll sprint after them, grab them by the wrist and make them chat.   They almost always say one of two things to me, either:  “Please go away and leave us alone.  You’re scaring my children / my dog / my husband” or “Don’t you get a little scared working all alone at this old, isolated house?”

“Um no, not really,” I reply, glancing over my shoulder at the Priory.  In the past, several villagers have taken me aside to warn me that the house is haunted.  “Wouldn’t catch me working there,” they say, looking me up and down and thinking I’m a needle short of a haystack.  Certainly, my brother-in-law, while conceding that the gardens were lovely, looked at the house and shivered,  “Wouldn’t get me inside there,” he said, throwing me a pitying look and shivering again. 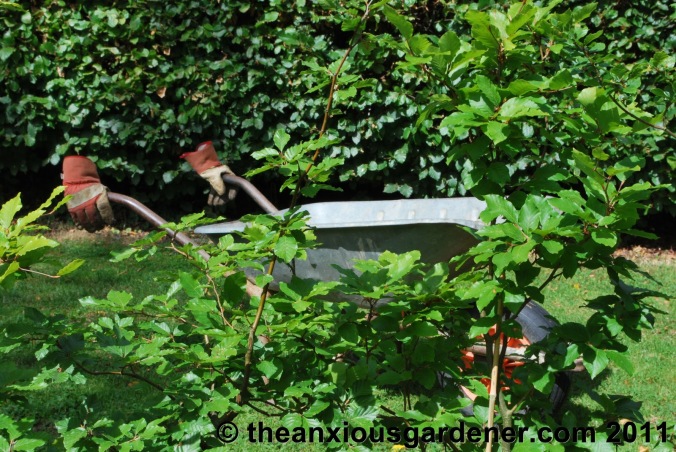 But I’ve never seen anything scary at the Priory, though I have felt watched on occasion even if the house has been empty.  On my first day – a blisteringly hot, archly still day in July – I weeded the beds that run along the eastern walls of the house.  These beds, after the-years-of-neglect, were a simple mix of bramble and bindweed, dock and ash saplings.  And so with my head buried in undergrowth, and my back to the gardens, I couldn’t be aware of any drooling, yellow-fanged miscreant shuffling up behind me, licking his pointy knife.  Just as well there wasn’t one then – at least I don’t think there was.  But, on that first day, I did get a little nervy: conscious that someone might be watching me. 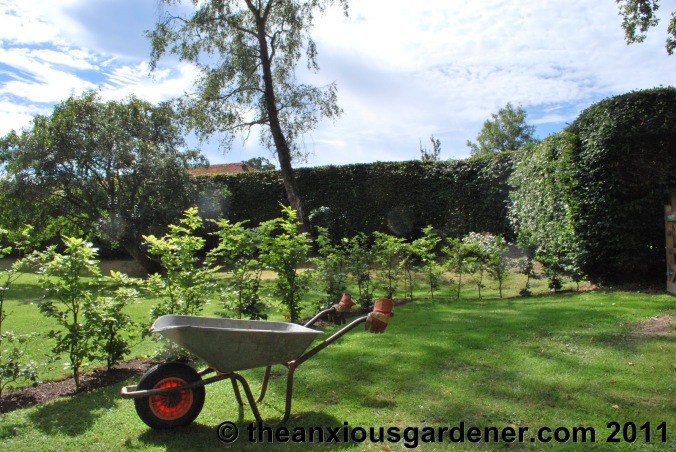 During periods of bad weather, I sometimes scurry into the house for a little DIY.  One winter, for example, I painted the kitchen ceiling and I did get spooked.  A little squeaky, shall we say.  Thought I heard someone tramping about upstairs, softly closing doors, murmuring – that sort of thing.  But I just gulped, turned up the radio a notch and concentrated on kittens-in-mittens and pretty puppies wrapped up in ribbons.  Usually does the trick.

And then about a year ago, I met Alfred.  Tall and handsome, in his seventies, Alfred has known the Priory all his life.  As a young man he was employed to paint and decorate – a regular job in a house of this size.  Shaking hands, his first words to me were, “You do know that the house is haunted, don’t you?”  I laughed and shook my head resignedly, “Er, yes.  I have heard.”

Instead, he looked up at the blank first floor windows and started talking;  more to the house, it seemed, than to me.  “I worked here one Spring with two other chaps.  Back in the ’60’s.  We were alone in the house and were up there painting the bedrooms.  We propped open one of the doors onto the landing with a big bucket of whitewash.  Door kept swinging shut, you see.  Half hour later, I went to fill my empty paint-pot from that bucket.  But it had been moved.  Moved right out onto the landing and the door was shut fast.  I didn’t shut it and my two mates couldn’t have got to that door without getting past me.  So who moved the pot?  Wasn’t us and there was no-one else in the house.  And do you know?  That landing was freezing cold.  Truly freezing.  I could see my breath.  It hadn’t been cold earlier but now it was.  Far, far colder than it ought to have been on a sunny May morning. Later, when I went to get paid, I told the owner what had happened.  The owner smiled faintly and said, “Ah, that’ll be the Priory ghost.  One can’t leave a door open in this place but the ghost will shut it.  The story goes that many, many years ago a young man was attacked and, on fleeing his enemies, sought sanctuary in the Priory.  He ran into the main building but left the front door wide open.  His pursuers ran in after him, drew their swords and cut him down.  The poor unfortunate now haunts the Priory and won’t stand for any of the doors being left ajar.”
“Blimey, Alfred,” I laughed, “that’s quite a story.”

oooOOOooo
As I say, I’ve never seen a ghost, or indeed anything scary, at the Priory.  And I don’t find it an inherently frightening place.  I thought it might be fun to create the image of a ghost from an ivy growing up an outbuilding wall (see “The Shape”).  As a nod, if you like, to Alfred’s story.
Unfortunately, rather than a ghost, the ivy is looking increasingly like a tall-spouted tea-pot.  Or, as several readers have commented, a chicken.  Still, I like to think it has the makings of a ghost.  Either way, I don’t suppose Alfred will find it amusing.

I wish you a Very Merry Christmas and a Happy and Healthy New Year.

*I don’t believe in ghosts, but Alfred does and he really did tell me this tale of the Priory ghost.