Once a week I drive up onto the ridge above the Priory to visit Margaret.
In her large, warm kitchen we have a natter, exchanging gossip about the Priory and the village, and a cup of tea.  Afterwards, I might have a nosey about the farmyard.  Go and see her chickens and guinea fowl or, at this time of year, go into her cattle shed and visit her cows. 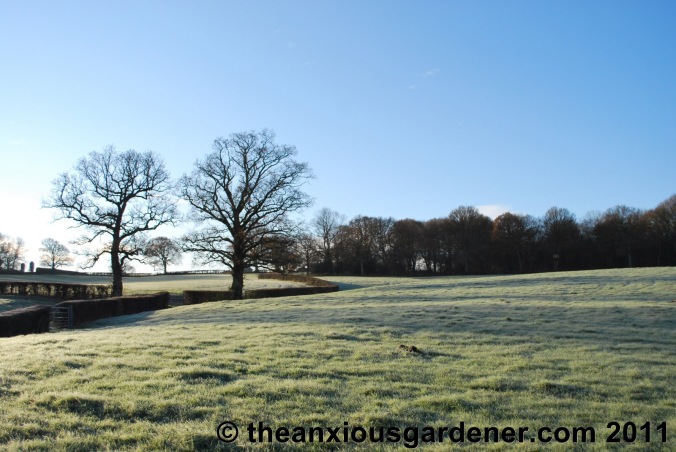 Margaret's farm through the trees and up on the hill above the Priory.

A heifer which she bought a few months ago at market, recently gave birth.  Or at least she tried to; the calf, which tragically was still-born, got stuck.  Poor  Margaret had to tie a rope about the corpse and pull it out – all by herself.  I was a little annoyed at her for not phoning me to come and help.  I could have jumped on the quad bike and been up at the farm in minutes.  Though truthfully I was a little relieved as well.  As much as I always wanted to be James Herriott, the thought of pulling a dead calf from it’s Mum did turn me a little green about the gills. 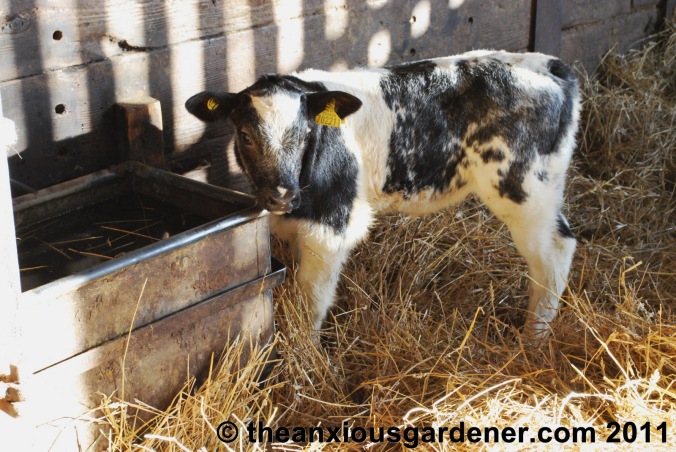 Margaret rushed over to a dairy farmer friend and bought a baby calf off him to replace the still-born.  Smearing the new arrival with the cow’s placenta (sorry, you’re not eating, I hope) she managed to fool the mother into believing this replacement was actually her own baby. 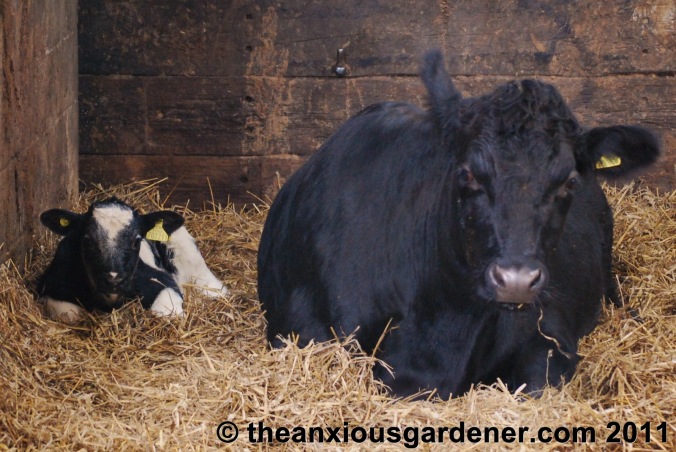 Hoorah – don’t you love a happy outcome?  This is the new arrival with her new mum. 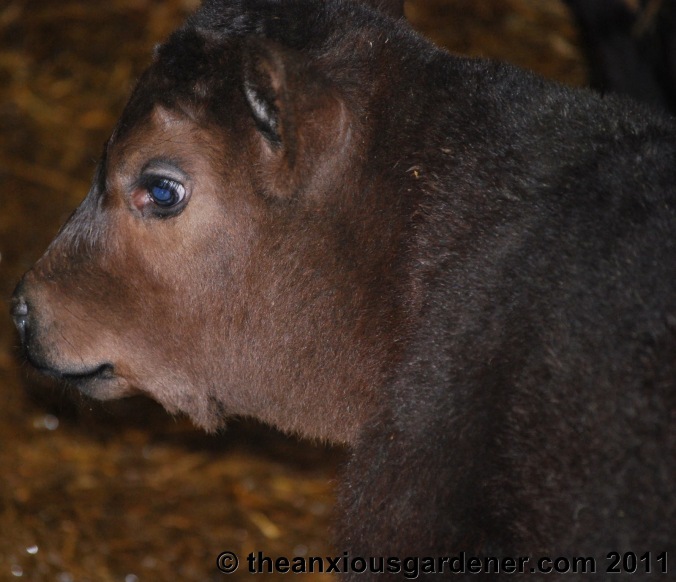 There are several other baby calves in the sheds at the moment including this one, which we’ve decided has as much teddy bear blood in it as cow. 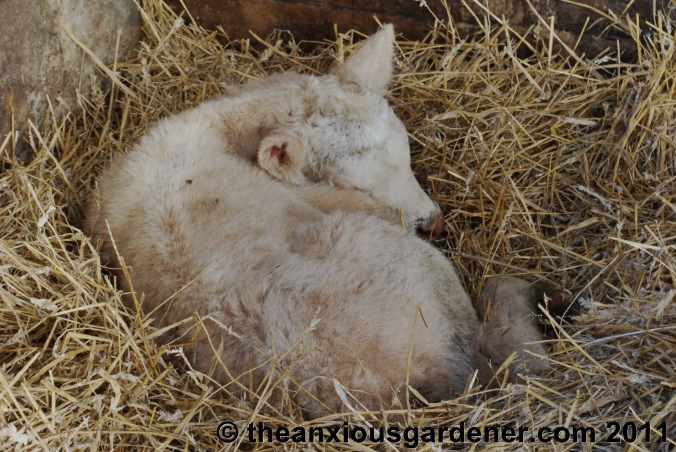 And this white one which was born a day before this photo was taken. 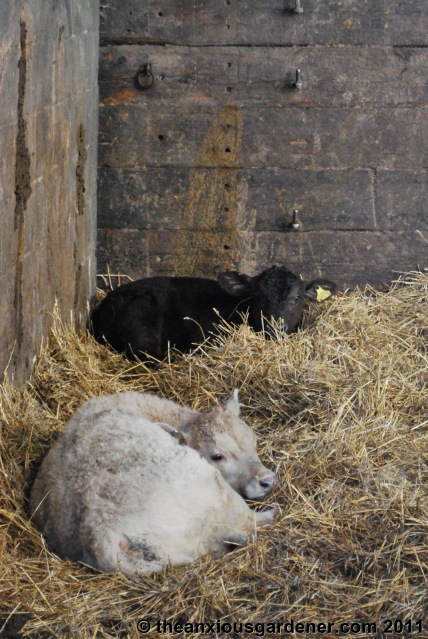 Here she is again a few days later. 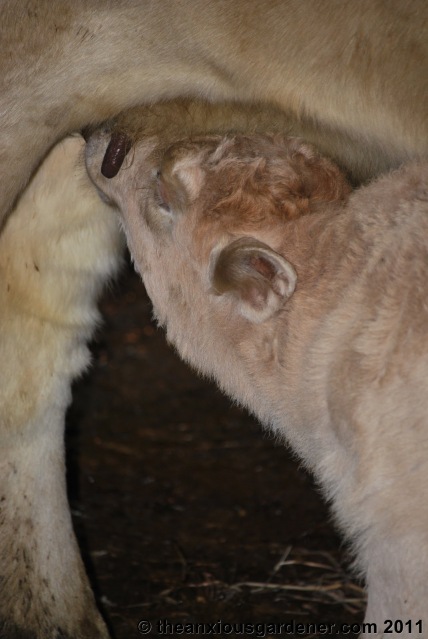 The cattle shed, freshly cleaned out and heaped high with fresh straw, is a warm, sweet smelling place to be. 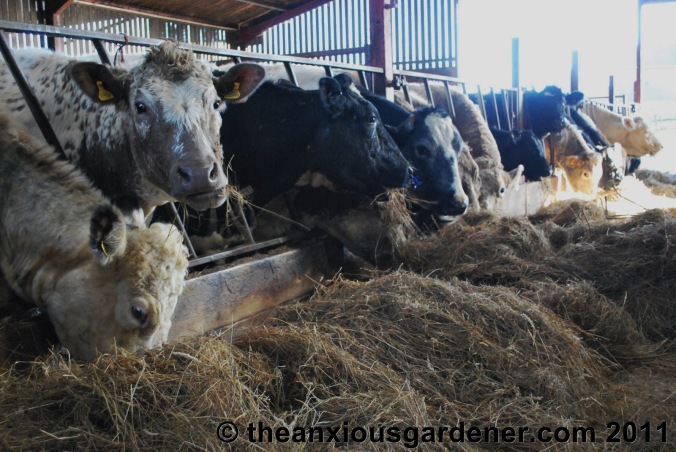 Though the thought of Margaret physically forking in the amount of hay and silage that she does every day is humbling. 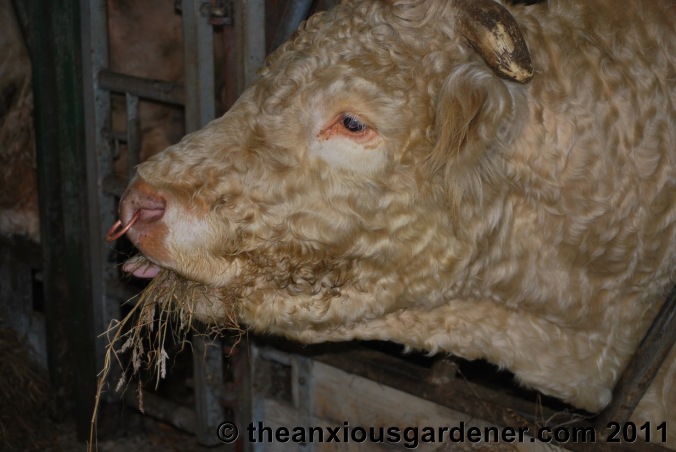 Trojan (not his real name).

Opposite the cows and calves are the big boys.  As well as raising beef cattle, Margaret leases out bulls to other farmers.  They go out into surrounding farms to do what bulls do best; make babies. 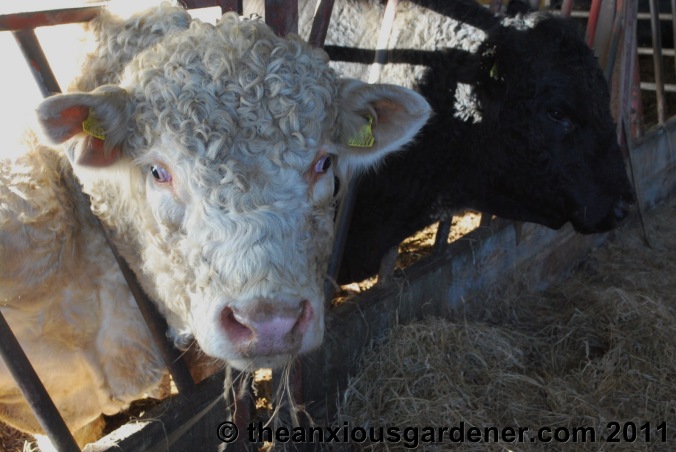 Mr Grumpy with Proud Crosby behind (their real names).

Sadly, one of Margaret’s favourites, Elgin, recently had to be sold off as beef.  Though she had had him for several years and was very fond of him, he had developed a kink in his bullhood.  Unable to hit his target and consequently unable to do his duty he, very sadly, had to go.  Let that be a lesson to you, boys. 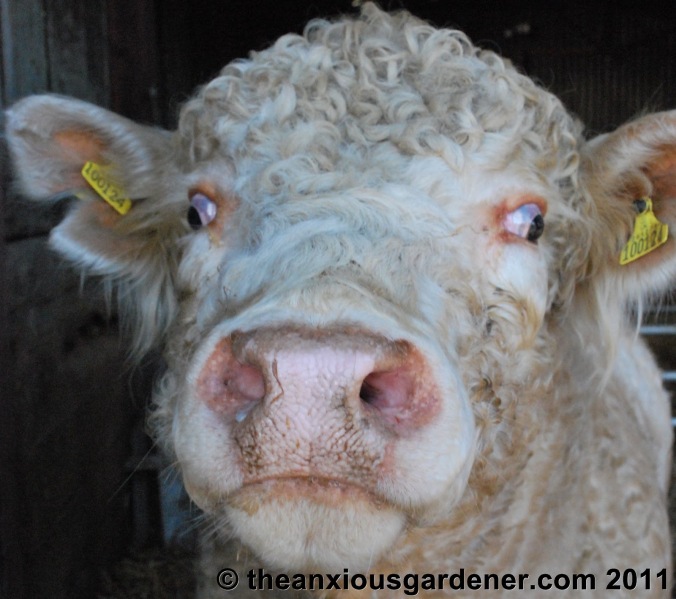 The bulls are massive.  Truly massive, with heads the size of armchairs.  When I first met them, Margaret hurriedly warned me not to stroked their enormous heads through the bars.  Not because they’re aggressive but because if they suddenly raise or shake their heads they can easily snap an arm against the railings. 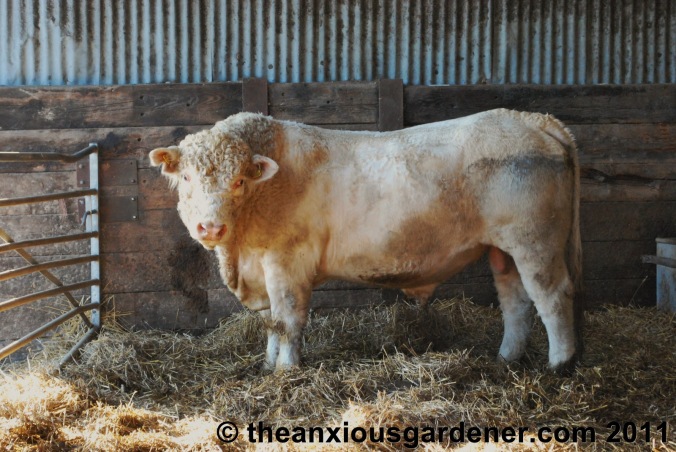 All the cattle will remain in the sheds now until the ground is firm and the grass starts growing again.  It’s a huge amount of work for Margaret as they obviously need to be fed, watered and cleaned out.  That many cows, bulls and calves produce a vast amount of manure.  But, hey!  A vast amount of manure is a good thing.  There are an awful lot of Priory roses.