We’ve been on a city-break to Antwerp.  Thought I’d better scrub up a bit first, so I had my monthly bath a couple of weeks early, scoured (most of) the ingrained grime from my hands and scraped (most of) the soil from under my fingernails.  I even had a haircut, a shave (radical, I know), changed out of my gardening trousers, stood them up by the washing machine and pulled on some new clothes.  Barely recognised myself.

Antwerp was sunny and warm and friendly; we sat at pavement cafés, sipping coffee and one or two (!?) cold beers and people-watched.  The only stress?  To see how much we could possibly get through at a fabulous €20 a head, eat-as-much-as-you-like Japanese restaurant.  (I suspect they’ll review their pricing policy after we waddled out, whimpering in gluttonous pain).

On returning home though I had a worrying text from Nick* (who helps me on some of the jobs at the Priory, such as mowing the meadow and cutting the hedges).   He wrote that a tree had come down during the stormy weather last weekend (which had missed Belgium completely).  But he didn’t say which tree it was, only that it had done so with several people about; my heart sank at the thought of one of the big ash or alder having ker-plunked into the east pond; or (no, please, no) one of the signature oaks, keeled over; shattered and splintered across the lawns.

Thankfully it was a Robinia pseudoacacia which, of all the trees, I was most ready to sacrifice (except for some of the conifers which, if tottering in high winds, I might have given an obliging nudge).  The Robinia had had sparse leaf and even sparser flower during my time; it always looked a little gaunt and a little sickly standing above the car park.  Though it never occurred to me that it was in danger of toppling over.

Amazingly Nick (who took the above two photos), Margaret (the farmer), Jo (the cleaner) and Reg (of the mighty digger) had all just arrived, parked and gone into the house.  When Nick came back out shortly afterwards, the tree was down – having narrowly missed Jo’s car.  Could have been a lot worse – if the robinia had come down a few minutes earlier it probably would have bonked someone on the head. 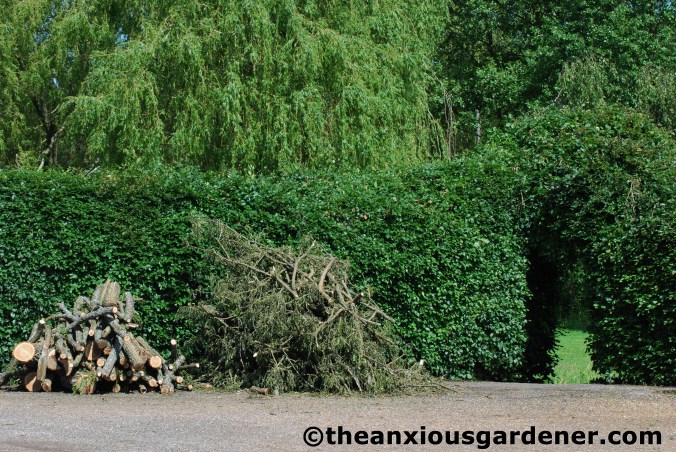 The beech hedge was surprisingly OK; a little crumpled and the beech arch a little dented.  And Nick earned himself a gold star by sawing and tidying up.

Otherwise the storm left the gardens fairly untouched; though some of my foxgloves (planted in a stretch of young beech) have taken a bow.  How gracious.

*Nick (his real name) is ‘Tim’ in some earlier posts.  This anonymity lark can get so confusing.

30 thoughts on “I Turn My Back For Five Minutes”