I don’t get a great variety of birds in my garden.

and a family of charismatic crows.  Hardly exciting stuff, though we do get … 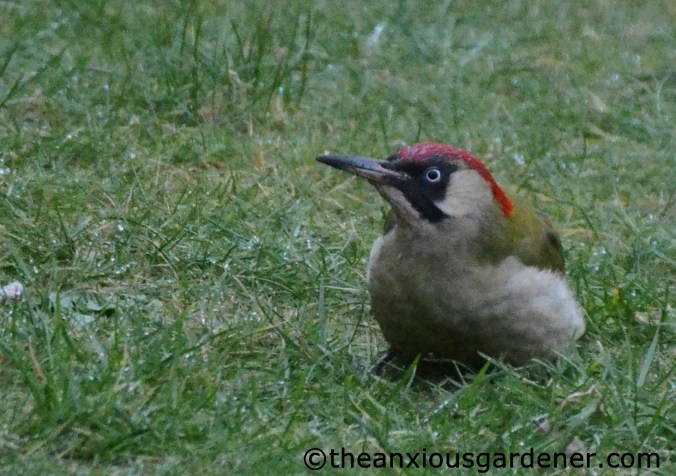 … green woodpeckers too.  They are regular visitors, feeding mostly on the ants that live in our dry, chalky soil.

But in comparison to the Priory, our garden is a bird wasteland. 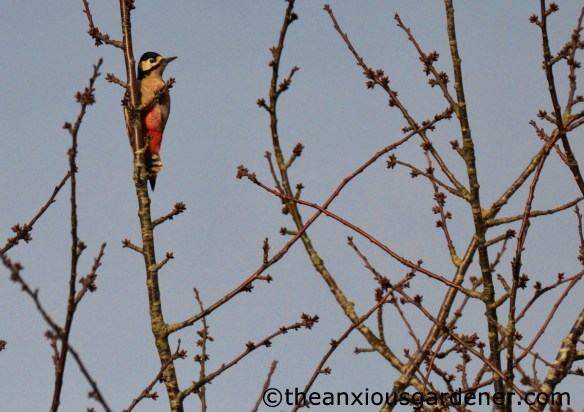 A Priory great spotted woodpecker keeps a wary eye on me

I’m not really a birdwatcher.  Not really.  I mean you wouldn’t call me a twitcher or even a birder – I don’t even take binoculars to work.  (At least not yet). 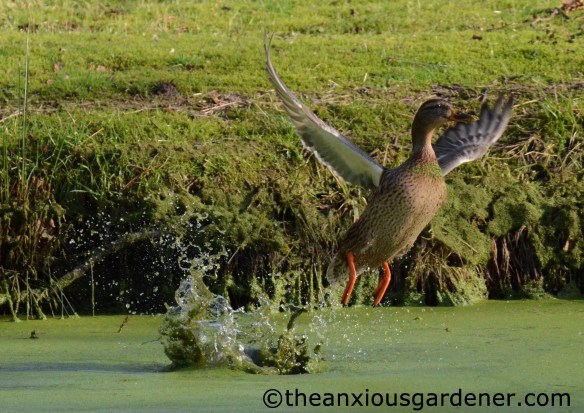 Sure, I’ve always been interested in birds just not … erm, evangelical if you know what I mean.

Not like a friend of mine, who is a little fizzy, shall we say, when it comes to birds.  It is simply impossible to go on a country walk with him.

Every ten yards, he’ll stop, shush me (!), raise his ‘bins’ (binoculars to you and I) and spend several minutes trying to identify a tiny, brown speck fifty yards away.  Meanwhile, I’ll be sighing loudly, gazing immobile at the sky, kicking leaves about, lusting after a pint, curling my tongue into a tube or petulantly flicking acorns at his head.

A chaffinch coming into land on a feeder

But since I started work at the Priory I’ve become much more aware of the birds that visit the gardens.  One might almost say I’ve become a bird anorak.  Almost.

It started on my first day: a hot, still and sunny July morning – spent weeding.  I immediately noticed just how much wildlife there was.  I was already in love with the place but all that ‘life’ added an extra depth of interest, a further layer of beauty that I was instantly drawn to and wanted to explore and encourage. 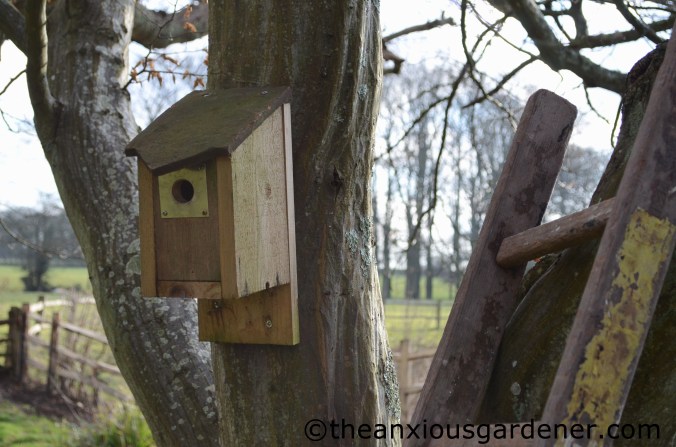 And so, during my first winter, I built several nest-boxes.  Using left-over timber from compost bin construction and old roofing tiles, they were quick and easy to make. 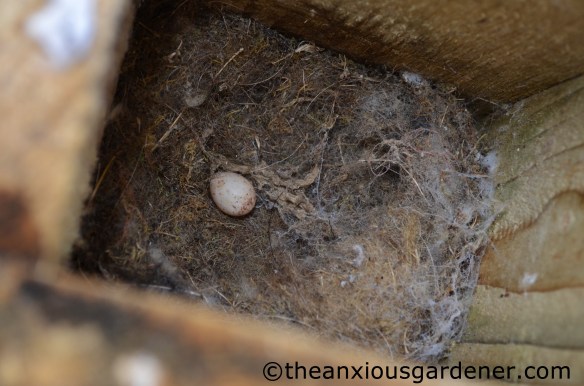 An old blue tit egg – I left it out on the grass. I’m sure it made a tasty (if rancid) snack for something or other

At this time of year, I clear them all out (removing the odd dead baby bird, unhatched eggs and any nesting material) and make a tally of those used during the previous season.  Out of eleven boxes, seven were used last year – a take up rate that matched last year and one I’m pretty happy with.  (Though my tawny owl box was a tawny owl no-no; looks like mandarin ducks used it again).

Father Christmas was kind to me; as well as a robin/pied flycatcher ‘box, I was given two bat boxes.  There are bats at the Priory – I’ve seen both pipistrelles and a (dead) brown long-eared bat but these will be the first roosting boxes to go up. 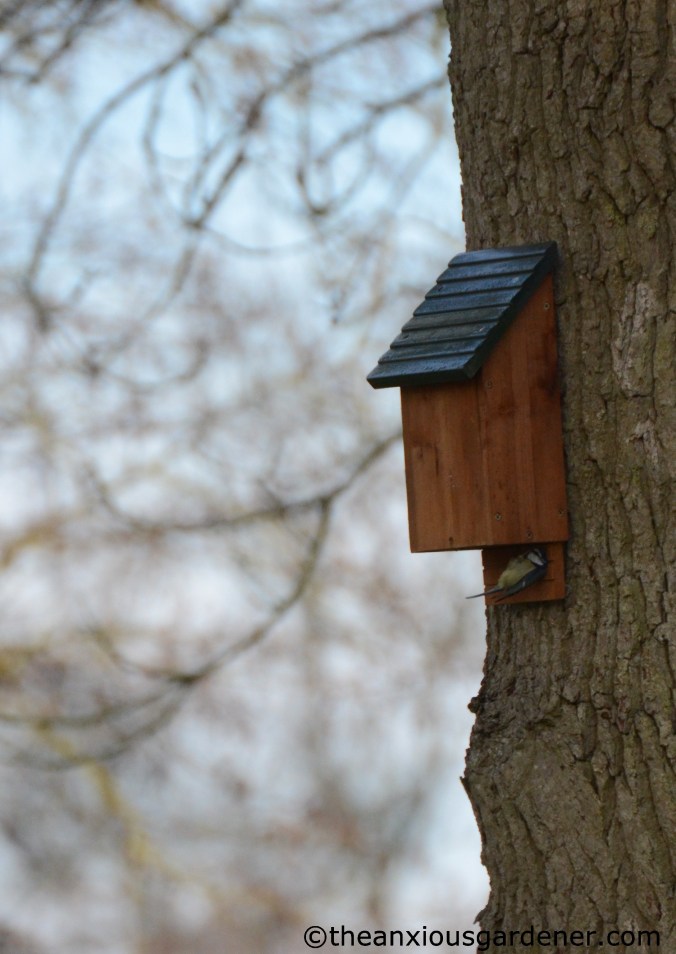 Within an hour of fixing one to an oak it was investigated – though not by its intended tenant. 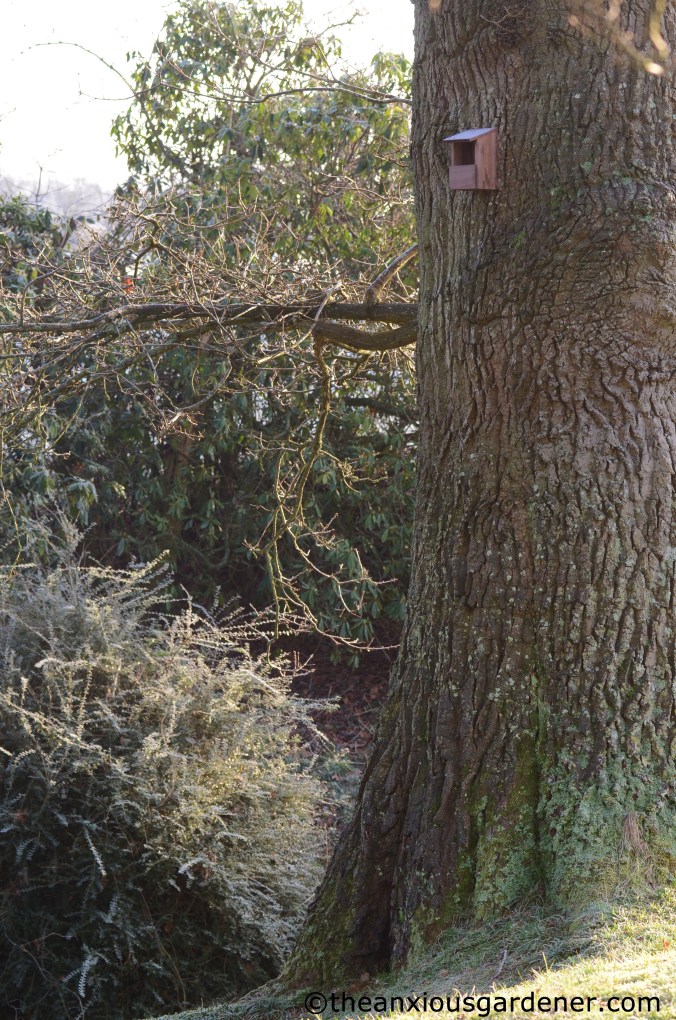 The robin/flycatcher box is now up on one of the large oaks.  Looks like a perfect grey squirrel (damn and blast them) baby-bird-chomping-station to me but we’ll see.

Goldfinches visiting a few weeks ago.

As well as building nest boxes, I also started feeding the birds.  We have six feeders (all protected against grey squirrels – damn and blast them).  And we get a good selection of visiting species.

All the usual suspects of course; blue tits and …

… their larger cousins, great tits.  (There goes another big spike in my viewing figures; thanks to Google searches by teenage boys.  Sorry lads). 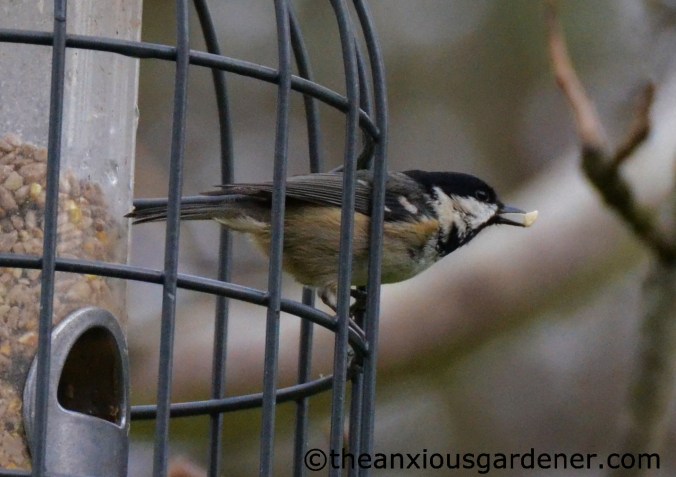 And my favourite of the three; the shyer, less ostentatious coal tit.

More common and less retiring than I thought, long-tailed tits flit in and out of view regularly.  I generally hear their high-pitched, repetitive call before I see them.  I never see a single bird; they always appear in small flocks and this insistent calling helps keep the group together.

During recent snow,  a dunnock pauses before dropping to the ground to feed on the spill beneath the feeders. 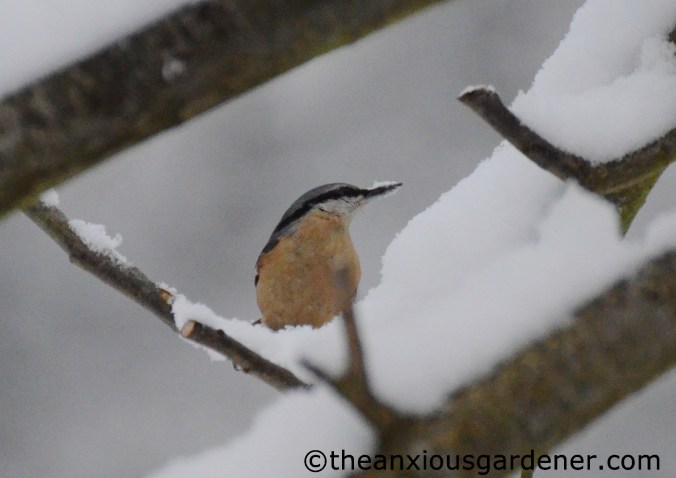 I’d always supposed nuthatches were fairly rare but I see them daily. 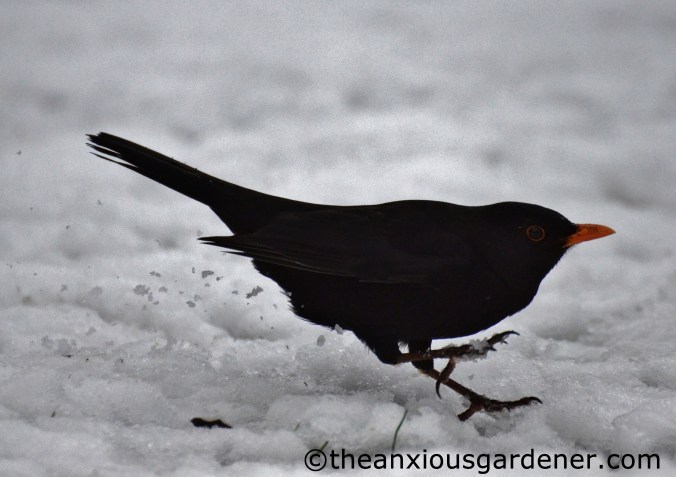 A male blackbird in a hurry. 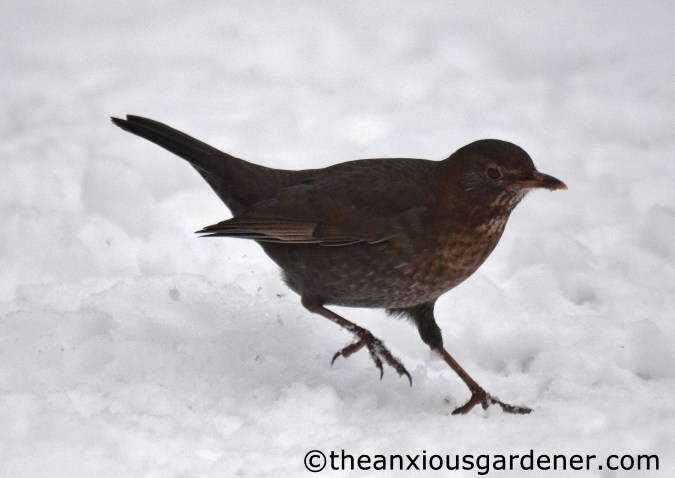 And a female heading for the apples I’ve put out.  But these apples always disappear way too fast.  I suspect crows carry them off.  Either crows or grey squirrels (damn and blast them).

A song thrush flits away towards shrub cover.  Tempting to use words like frolicking in a scene like this but finding enough food in snow doesn’t leave much time for frolicking, I fear. 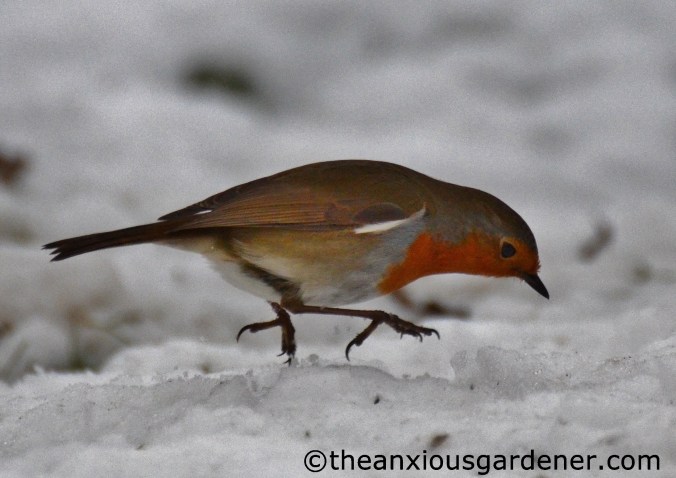 I’m a bit obsessed with robins.  They are constant companions and so darn photogenic.  But I make no apology – it is my blog after all.  Anyway, it’s probably an infatuation I’ll grow out of … but I suspect not. 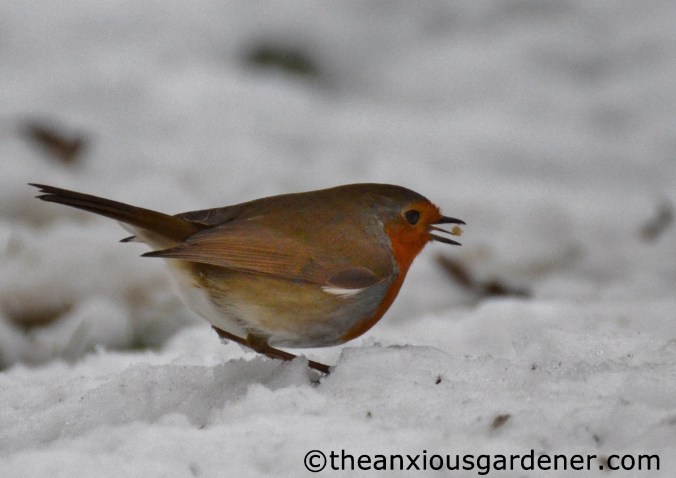 They are robust characters, battling with one another for the rich territory that is the feeding area.  And this one is an adept master of millet-seed-balancing.

The other day, I was photographing goldfinches …

… when I noticed two yellow finch-like birds.  And quite honestly, I am not entirely sure what they are.  I think (after lots of page flipping and internet clicking) that they are siskins.  The top one a juvenile male and the lower …

… a female.  But I would welcome confirmation (or correction) from all you birdy types out there.  Needless to say, I’ve never seen a siskin before (and perhaps I still haven’t).

Shortly after I took this photo, I heard one shrill blackbird alarm call and all the birds disappeared!  Just like that.  The garden had been full of birds and their tweets and trills but suddenly there was just total silence.  What on earth? 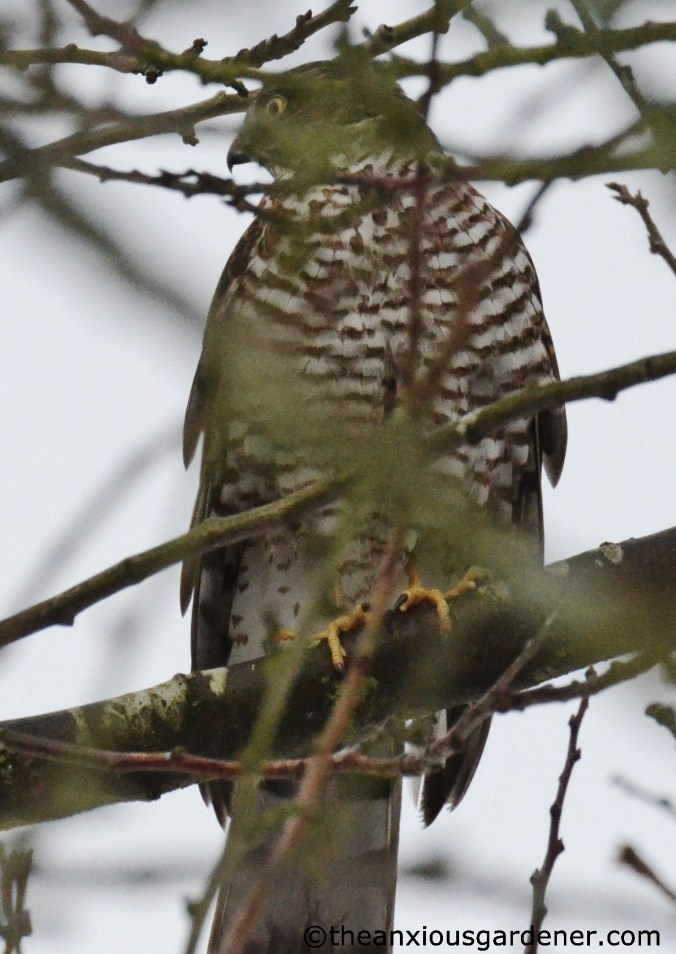 I turned round and looked up into the large greengage tree and, for the space of five seconds, a sparrowhawk glared down at me.  I fumbled with my camera, frantically trying to focus on the eyes rather than on all the intervening branches and managed to click twice.  Then he vanished. My first sparrowhawk shot!  Not quite the one I hoped for but it’s a start.  And I know he’ll be back.  Because once I started feeding and encouraging small birds into the garden, I also created a target rich environment for a sparrowhawk.  I also started feeding and encouraging them.

Yep, he’ll definitely be back.