When Geoff and Anne Shaw bought Follers Manor in 2006 it was a mess.  The house was virtually uninhabitable and the grounds an eyesore: a jumble of tussock, weeds and builders’ rubble with a large, long-abandoned tennis court as a central feature.

Today with the house and gardens rejuvenated it is easier to understand why they bought Follers.  Invisible from the road, the house sits high above the Cuckmere valley just outside Alfriston in East Sussex.

Looking down at Litlington

Below it to the east lies the small village of Litlington with far views of the South Downs National Park beyond.

After renovating the house, Geoff and Anne realised that they would need help with the derelict garden and turned to designer, Ian Kitson, for inspiration.  His brief was simple: a garden that was colourful; that would encourage wildlife and trickiest, a garden that would vie confidently against such an impressive backdrop.

I first visited Follers on 8th June – with about three hundred other guests on a rare, open afternoon.  Impressed as I was, the gardens were too busy for my anti-social tastes and taking photos was frustrating.  Luckily a mutual friend (Gary, Seaford’s premier barber) arranged an introduction to Geoff and a couple of weeks later, I pulled up at 7.30 on a perfect sunny morning.  The house was still sleeping when I let myself in for an intimate, almost intrusive second exploration of the garden.

From the small car-park, there is little hint of what lies before you.  I padded down a path between the house and a large, handsome yew tree

to the sunken garden immediately behind the Manor. 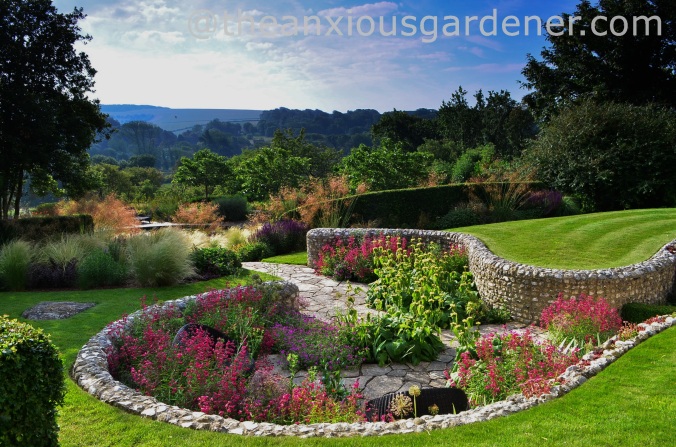 Ian planned a sheltered, intimate seating area here and lined its sinuous curves with retaining flint walls; nicely mirroring the brick and flint of the house. 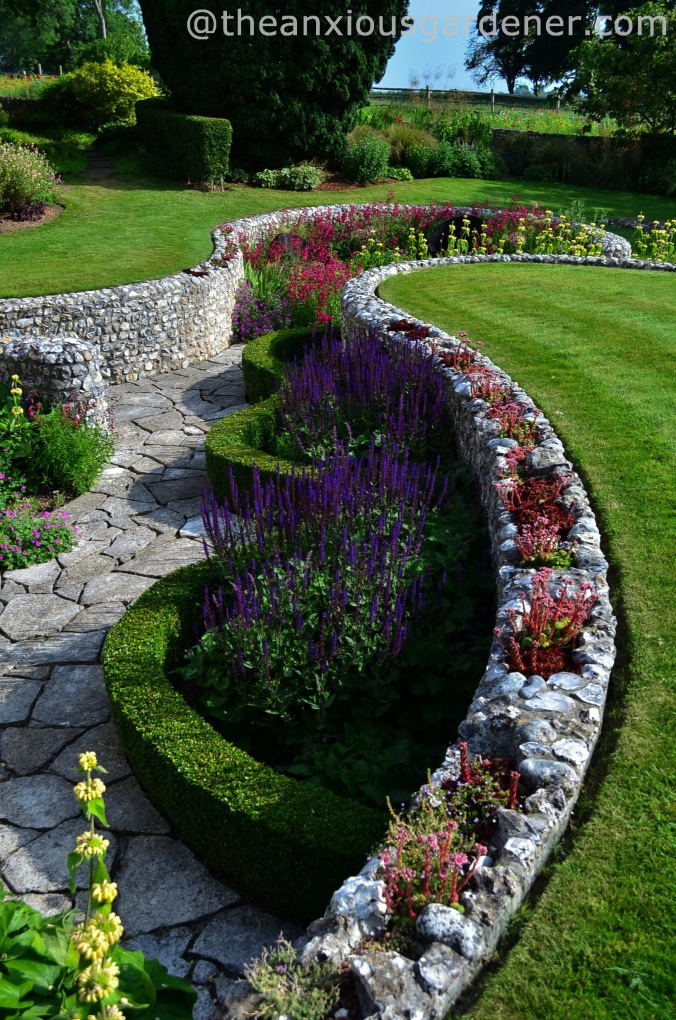 It is brightly if simply planted with penstemon, hardy geranium, phlomis and salvia with sempervivums in the planting pockets along the top of the wall.  The clipped box adds further waves (there are no straight lines in the garden) and the floor is crazy paving.  Who’d have thought that crazy paving could look so right? 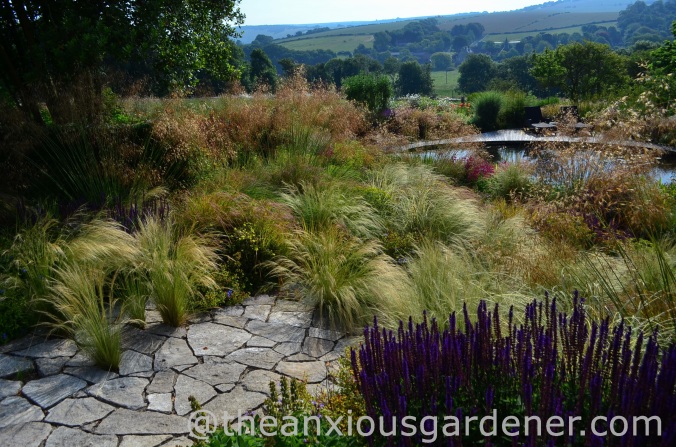 The limestone pavement continues as a path down toward the wildlife pond. 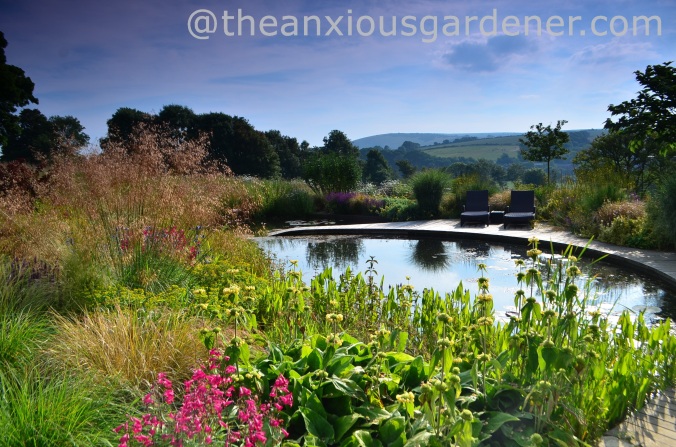 Obviously, large pools of water aren’t a natural feature on porous chalk so the pond is particularly striking; especially against that background. 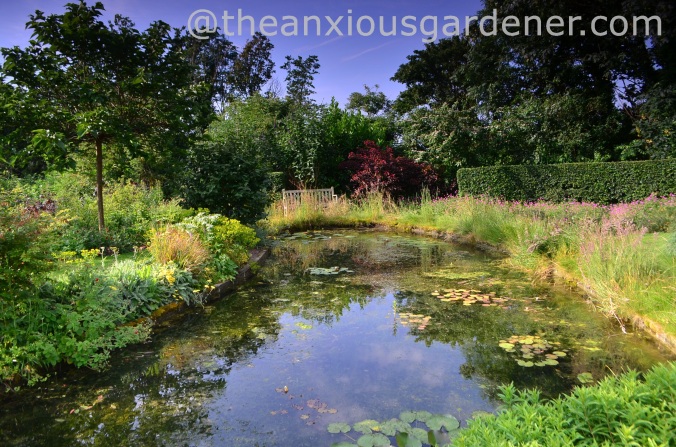 A decking bridge spans the water

and continues its sweep on the far bank before dipping into the water.

This was a highlight of my visit with large dragonflies flashing about my head and newts scuttling down into the depths at my approach. 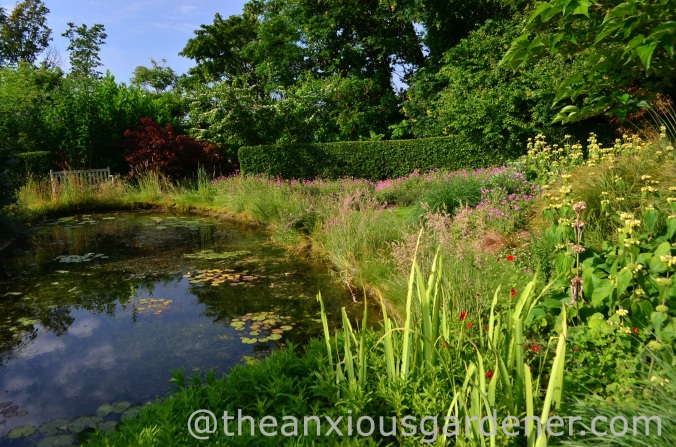 Near the pond’s edge, the elegant planting from the upper garden merges into the less formal, more natural.

I particularly liked this marginal.  I will be introducing pickerel weed (Pontederia cordata) to the ponds at the Priory. 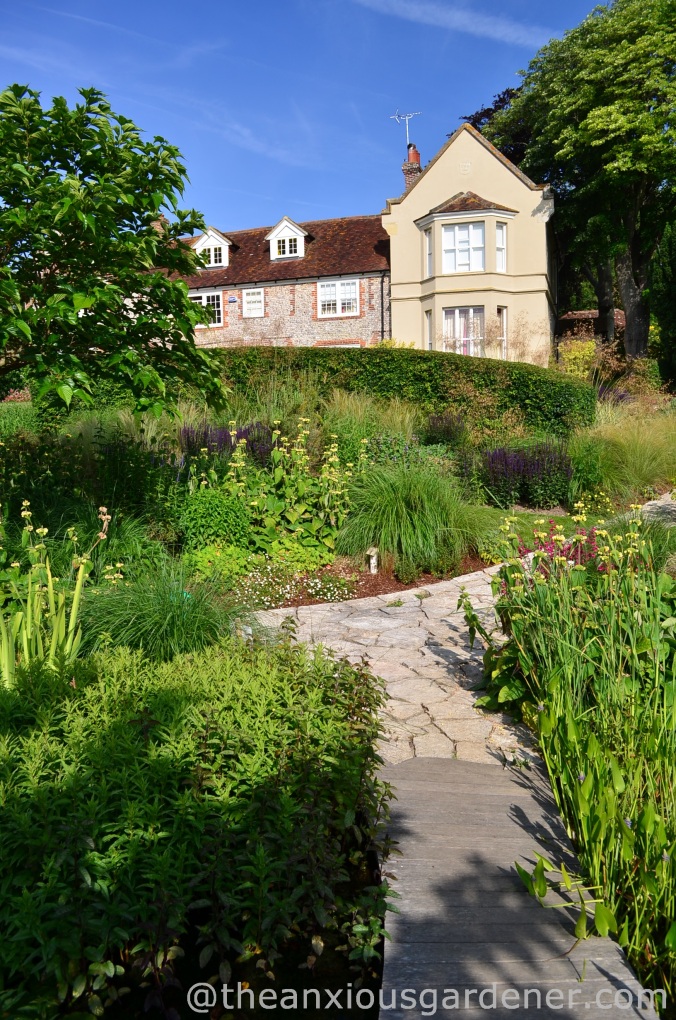 It was whilst standing on the decking that I experienced my first, painful jab of jealousy.  I want to sit here in the early morning with a pot of coffee and a newspaper; distracted only by the buzz of insects and birdsong.  And buttered toast.

Beyond the pond are more borders, fruit trees and plenty of old elder trees.  With its plates of pale, fizzy flowers, blackberries and furrowed bark, I like elder – though many consider it a weed-tree.

At the bottom of the garden are bee-hives and my jealousy level notched up a level.  I am very keen to have a couple of hives at the Priory and I’m seeking a bee-keeper to site hives on the meadow.  Anyone?

I stood transfixed for several minutes just watching the to-ing and froing and the gentle hum of activity.  The bees are tended by gardeners, Steve and Julia, who each work three days a week at Follers.  Geoff mows and edges the lawns himself, sometimes twice a week.  (I do like to know how many gardening-days maintain a garden, don’t you)?

A woodland path leads back up to the house and beyond is the flower meadow, at its peak in June.

Whilst I was snapping away, Geoff came out to introduce himself and chat.  It was obvious that we weren’t standing in an ordinary wild-flower meadow. 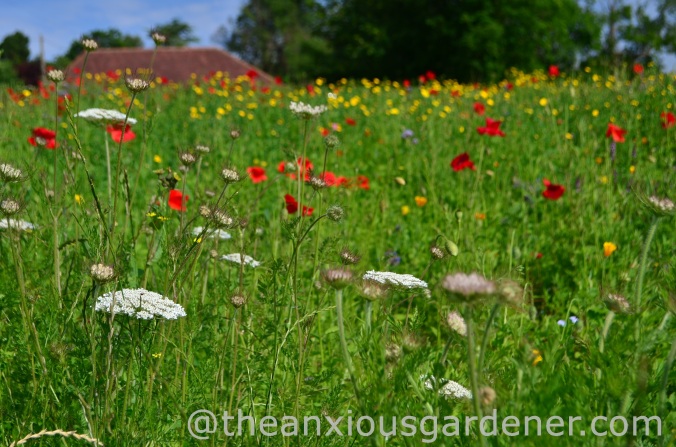 “We originally had the field seeded with meadow grass for the first year and I just cut some paths through it.  In September 2010. garden designer Julie Toll suggested we try “pictorial landscape” mix.  To use a new mix we had to kill it all anyway and rotivate it back to bare soil and that is the method required each subsequent year as it is only an annual meadow.  We also have a pernicious weed called prickly lettuce which we are trying to eradicate so we use Roundup in the autumn and also again in February prior to being rotivated and re-seeded.  I much prefer the results that we achieve versus the perennial meadow which we have elsewhere in the garden but which has not lived up to my original expectations.” 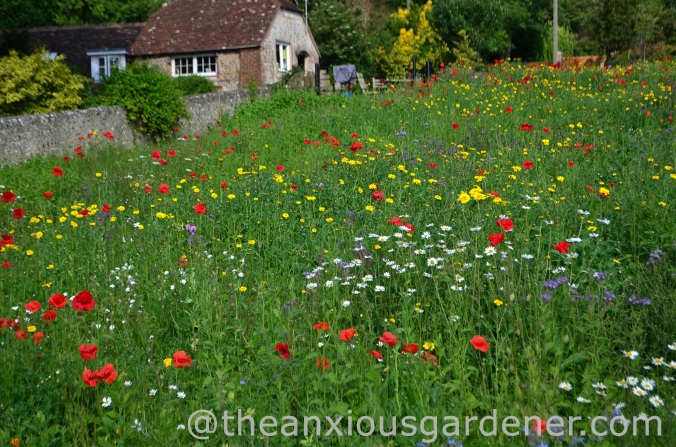 The meadow is undoubtedly beautiful but I baulked at twice yearly spraying with Roundup (glyphosate) over such a large area.  And though I didn’t baulk at the result, I won’t be spraying my perennial flower and grass meadow.  Weeds and all.

Do I think Ian Kitson fulfilled his brief?  Well, the garden is certainly very colourful, fresh and exciting.  Tick.  As you might expect, the pond-on-chalk is a draw for all kinds of wildlife, as are all those trees and flowers.  Tick.  And for a young garden, it sits remarkably assured and at ease within an ancient landscape.  Tick.  To pull off all three requirements so successfully is quite a feat, Mr Kitson.

I’m afraid that Follers Manor isn’t open to the public again until next year (other than to groups of 20 or more).  For more details of the garden and for 2015 open days (not yet published) see the Shaw’s WEBSITE.  You might also want to visit Ian Kitson’s WEBSITE.  You’ll find a link to a Gardener’s World interview with Ian talking about Follers, as well as plans of the garden and some ‘before’ photos (including the horrible tennis court).

(Follers Manor featured in the Channel 4 programme ‘Landscape Man’ which charted the making of the garden.  You can watch it on YouTube – HERE).