The gardens are generally looking fine. 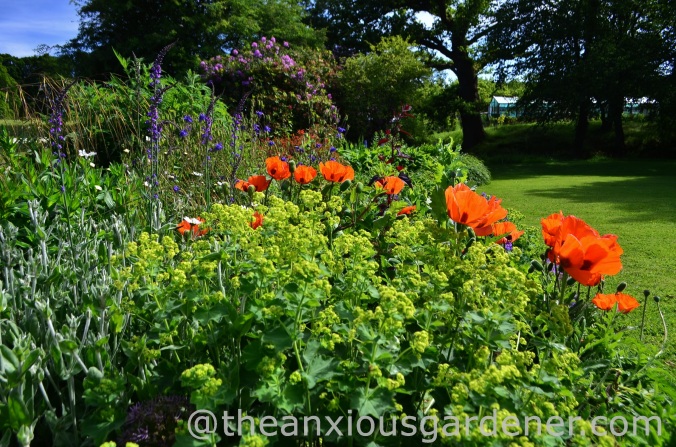 Though frankly if they didn’t during June, I might as well give up and get a proper job. 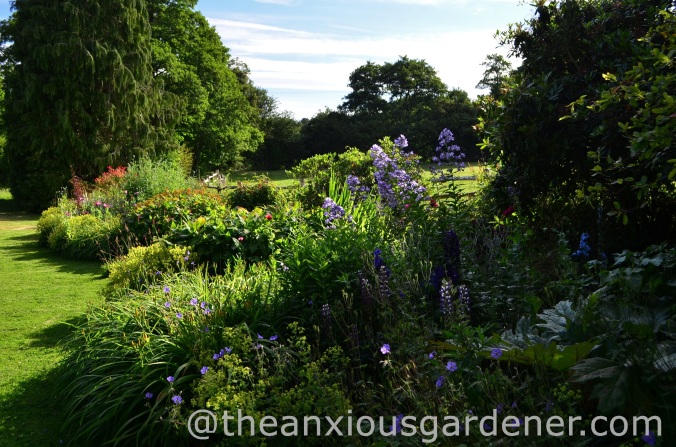 But the Kidney Beds are in dire need of a major revamp.  They were cobbled together five years ago with a few sitting tenants, some plants from my garden, gifts from friends and impulse buys.  I’ve added all sorts of ‘stuff’ since then. 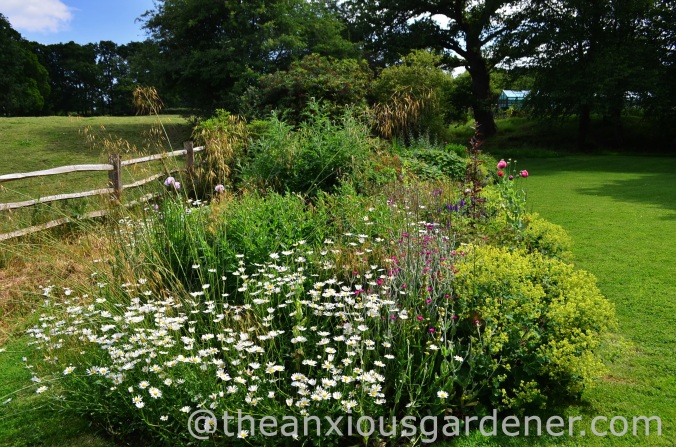 And I have been fairly pleased with how they’ve performed whilst I concentrated on other parts of the garden.  But (and yes, I say it every year) their time has come: in the autumn I am going to strip them out, simplify and replant. 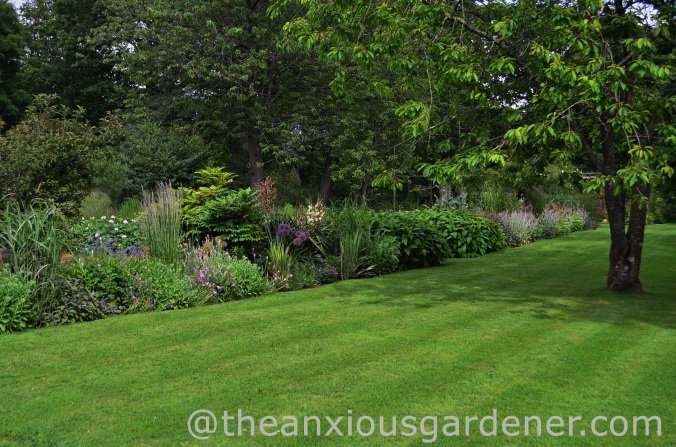 And the same goes for you, Long Borders.  I now have enough mature, bulky plants to make a bolder, less bitty design and give space to swamped, under-performers.  In the early days, my main concern was filling bare soil but now I’m looking forward to a full frontal assault on all four borders with digging-fork, spade, mattock, bow-saw and grin. 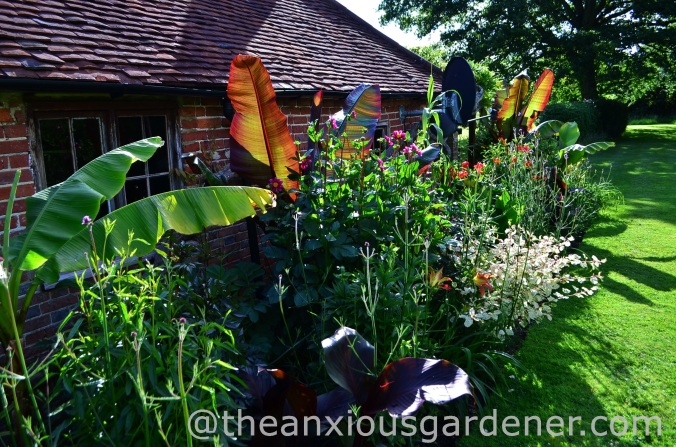 During June the Tropical Border gets under way.  And this is a border which I did plan and plant from scratch – and that I really enjoyed.  I’ll do a post later in the summer on how it has developed this year; which plants I’ve added … and which I’ve deleted. 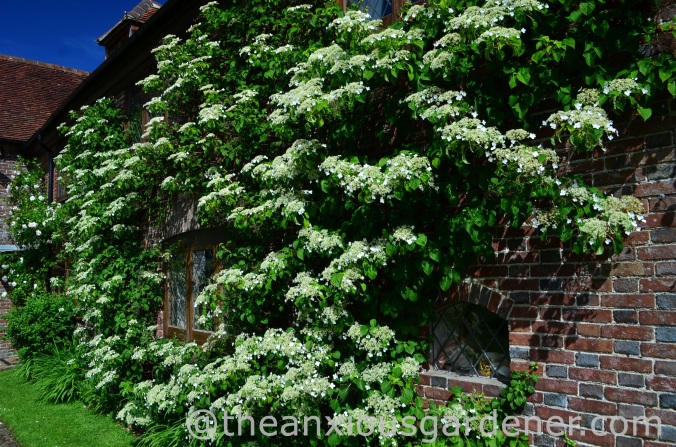 Some plants in the garden don’t need much attention; the Hydrangea petiolaris on the front wall of the house for example.  I deadhead it (a little), cut growth creeping over windows and into the roof but otherwise leave it to its own slow devices. 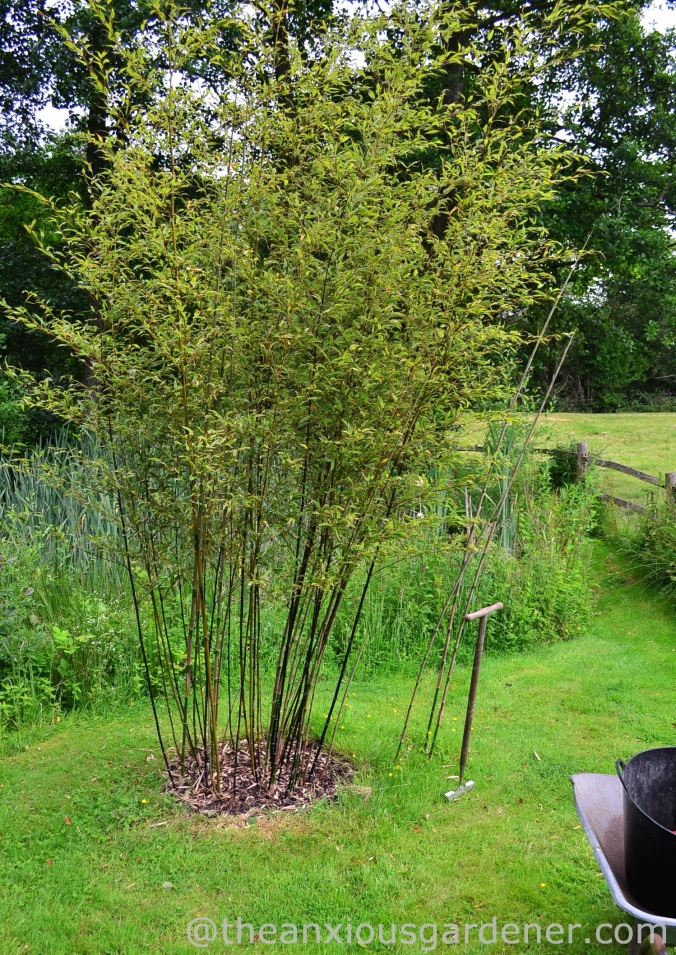 Some plants left unwatched will mis-behave.  This black bamboo (Phyllostachys nigra) was about two foot tall and a foot across (and mostly dead) when I rescued it from a garden centre bargain basement.  I homed it in a quiet, mostly unvisited, unseen corner of the garden five or six years ago.  It has a clearly defined planting pocket but has chosen to throw out three new canes into the surrounding grass.  I didn’t really have time to enlarge the ‘pocket with an edging iron but had to save those three large new shoots.  Then, on hands and knees, I lifted away the turf.  And goodness but didn’t half jump when I uncovered this: 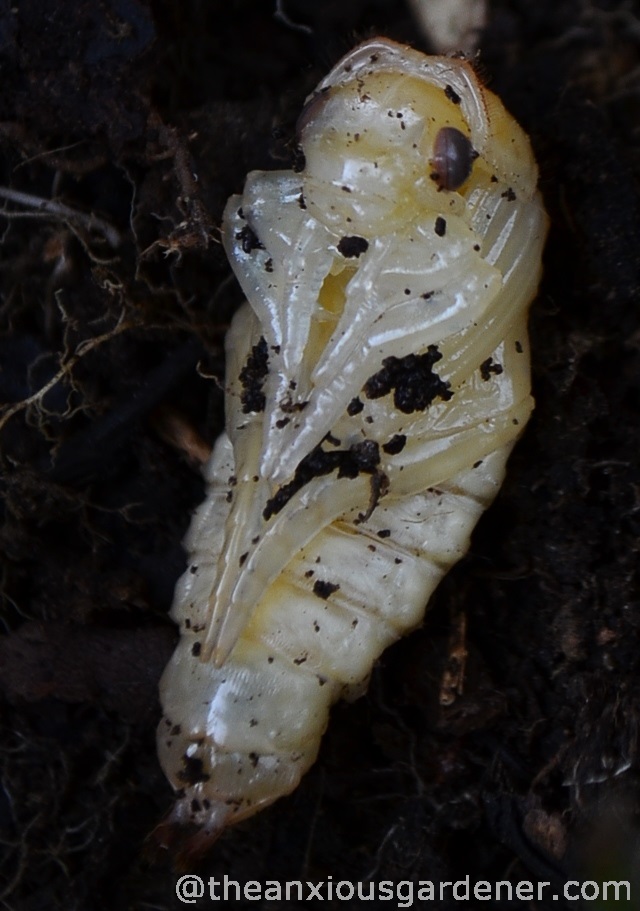 I have no idea what it is – looks rather like something Quatermass would have unearthed: an inspiration for H R Giger’s Alien. 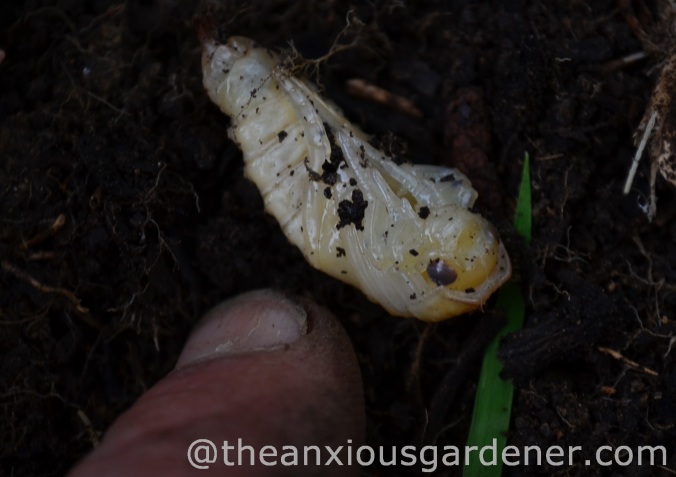 I was fascinated and especially so by the larva leaping about like a Mexican jumping bean. 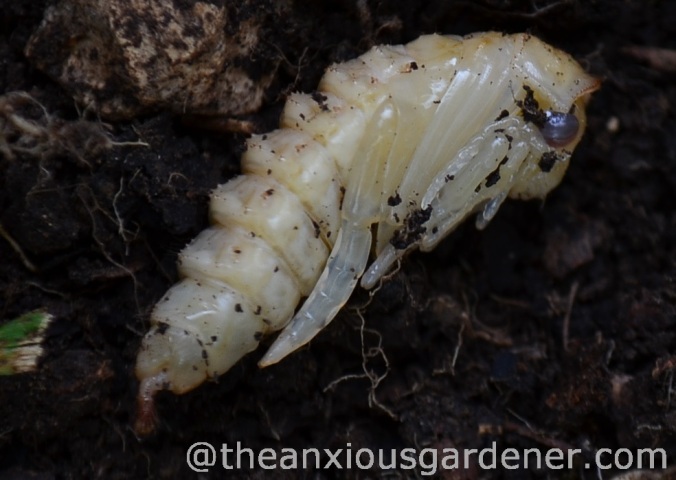 I hastily re-buried it and wondered what it would pupate into and what would eventually emerge from deep within the bamboo.  And whether it’ll bear a grudge.** 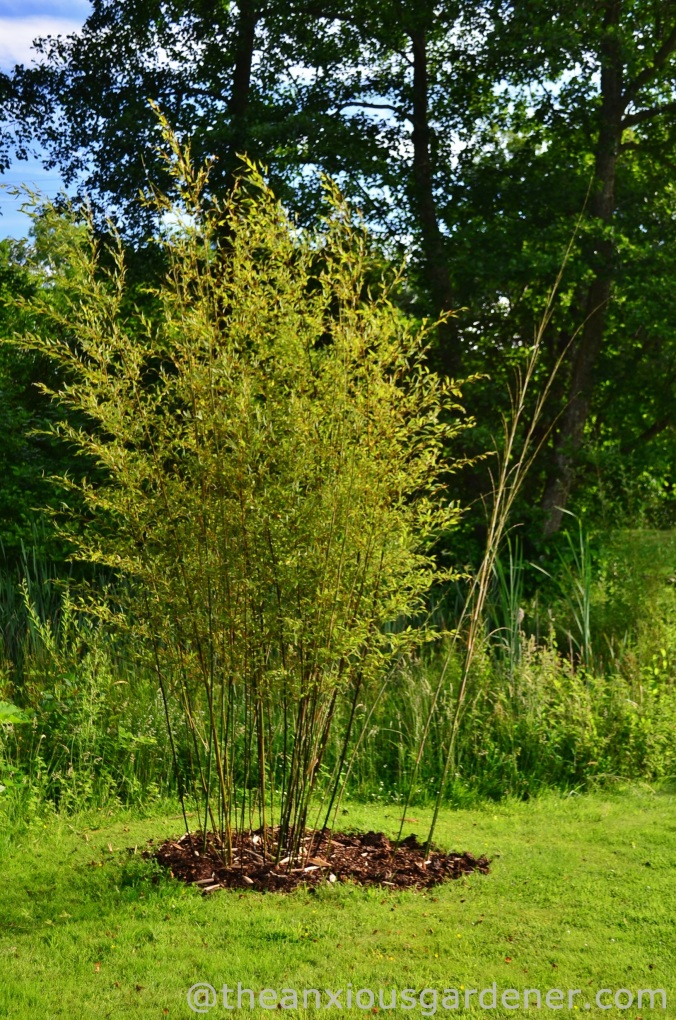 I fed and re-mulched the bamboo and happily counted 20 new canes – normally it produces a dozen.  (The new canes are green but gradually darken to black over the course of a year).  I remove thinner, older canes as new, thicker ones grow and strip off the lower leaves to show-off the black. 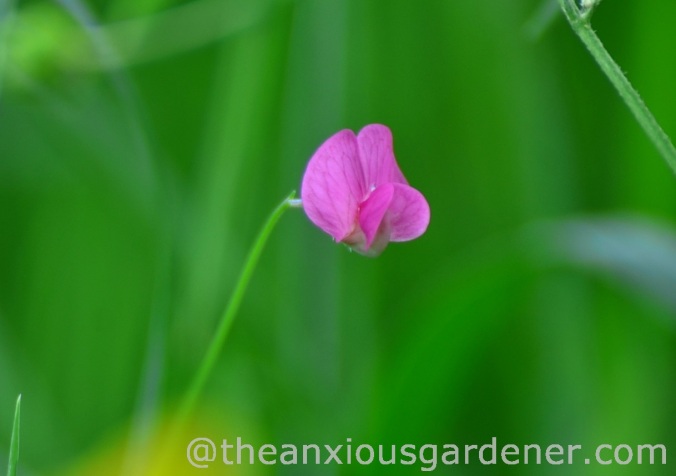 I haven’t seen grass vetchling (Lathyrus nissolia) on the meadow since 2011 –  though I look every year.  In early June it was back in several large-ish patches.  I think it perfect. 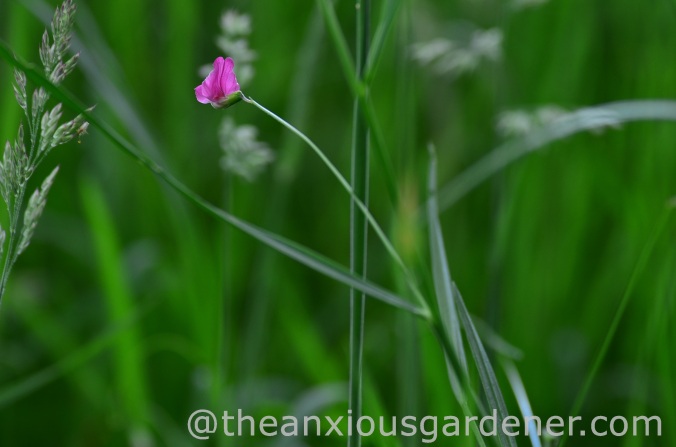 And it does grow from what looks like grass, rather than the usual pea-like vetch leaves – hence its name. 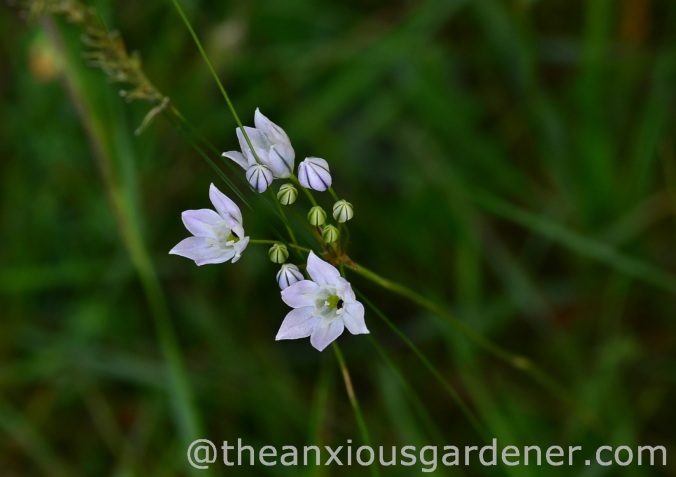 And does anyone know what this is?  I’ve tried and failed to identify it.  It appeared in un-mown grass by the greenhouses. 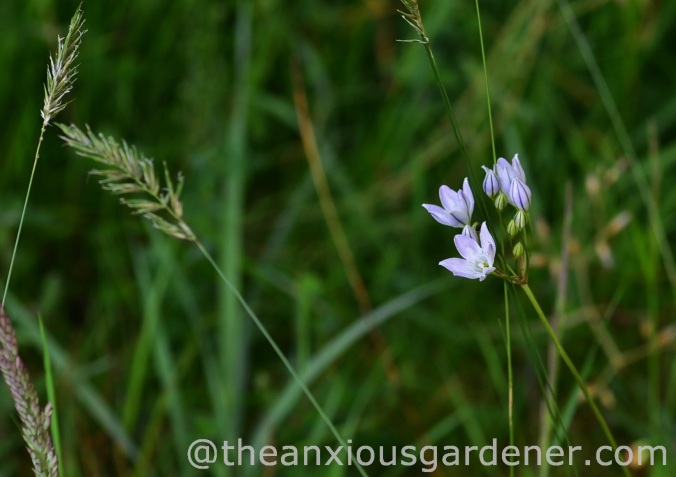 I think it is an allium but where has it come from?  It isn’t anything I’ve introduced.  Pretty though. * 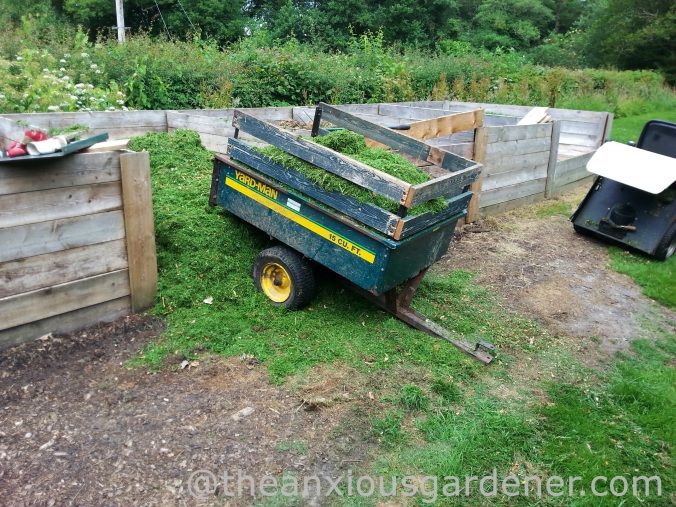 Grass grows so very quickly during May and June that mowing seems endless.  Actually, no mowing is endless.  But Hallelujah!  The recent lack of rain has finally put a stop to that inch of  new growth every few days.  Mowing is hard, hot and pretty boring work – my method of emptying the trailer into the compost bins doesn’t make it any easier. 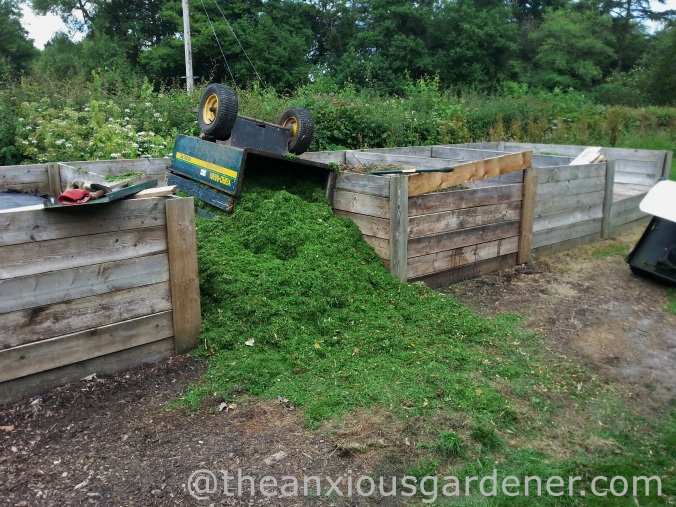 That full trailer is very heavy to tip over and I can have five or six to empty a day.  (I save a pretty penny on gym fees).  Mowing operations are slowed and interrupted by languid bumbles and distracted honey bees.  (I can’t mow a bee; call me old-fashioned).  I stop and nudge them gently with the front of the mower, so entranced are they by flowering clover. 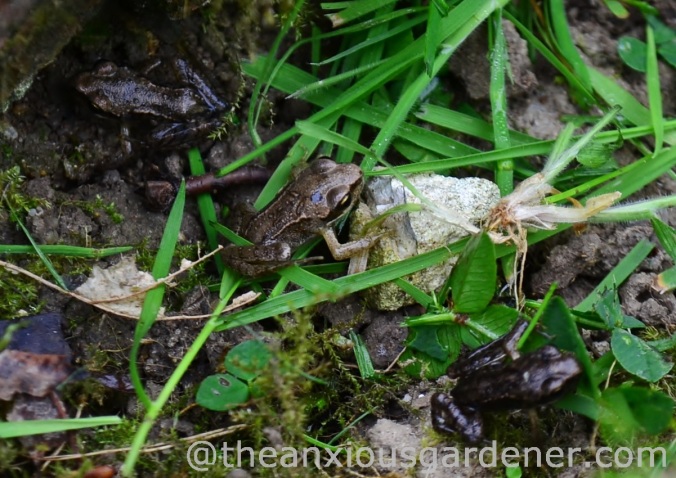 But what has truly slowed grass-cutting down this year are froglets.  Dozens upon dozens of them – and they’re just the ones I notice.  I reckon there must be thousands, especially in the meadow and along the pond fringes and ditches where the grass is damper.  As I mow, or even just walk about, they hop about my approaching feet or wheels – like miniature firecrackers.  But often they don’t actually get out of my way and again I stop the mower, gather them up or shoo them them safely to one side.  (I can’t mow a frog: call me old-fashioned). 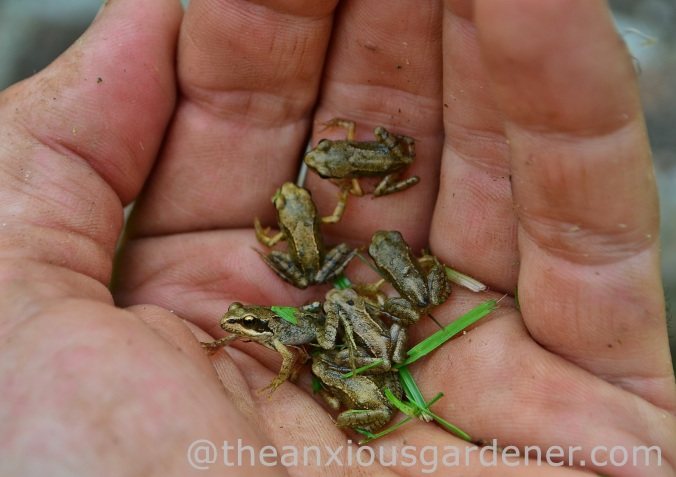 Here’s a small gang I disturbed when lawn-edging.

* Thanks to Fraser – @insightofseed – and Frank at Bittster who both suggested triteleia and a quick on-line image search confirms that it is.  It’s also called Fool’s Onion – now then, who suggested it might be an allium?

**  And thanks also for your suggestions in helping to identify the larva (though actually I realise now it is a pupa).  I think it is a great diving beetle.  Unless you know different.

46 thoughts on “Beauty And A Beast”