On a cold drizzle-evening recently, I settled down with a glass of wine and my laptop.  The laptop’s hard drive was groaning with 45 000 (!) digital photos and it was time to make some space.  After deleting a couple of hundred, and drifting off to the fridge for a refill, I grew distracted by re-discovering half-forgotten photographs, squirrelled away in deep, dusty folders and dank, cobwebby files.  I found one batch taken on a weekend break to Norfolk with my partner Jim and our son in August 2013.  I’ll post some of those now in the hope that they provide a little wistful sun and cheer during a rainy, drab month. 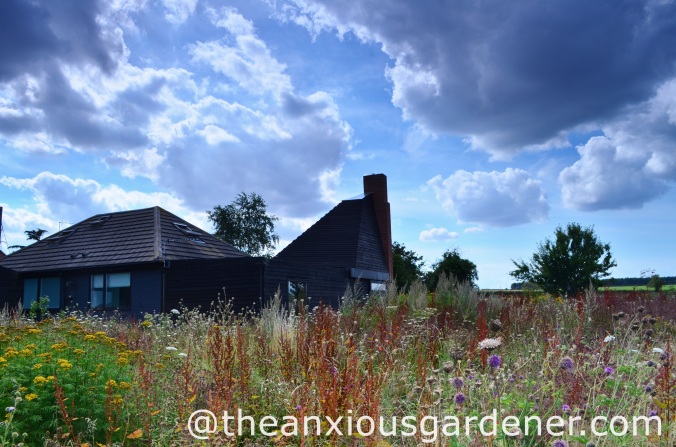 When a member of Jim’s family kindly offered us the use of her holiday home in north Norfolk we immediately, excitedly, breathlessly replied, ‘Yes, yes, yes!’

The house was an unremarkable bungalow until it was redesigned and rebuilt in 2003.  It is a bold design and won’t be to everybody’s taste.  But after a little initial hesitancy, I loved it.

Inside is bright, airy and minimal: all polished concrete floors and beech ply.  No chintz.  The living room has a high, vaulted ceiling (into that steep, pitched roof) revealing the expanse of brick chimney with a wood burner at its base.  Large windows give plenty of light of course (though I would have made them bigger still) and gaze out over a simple garden to surrounding fields and salt-marsh. 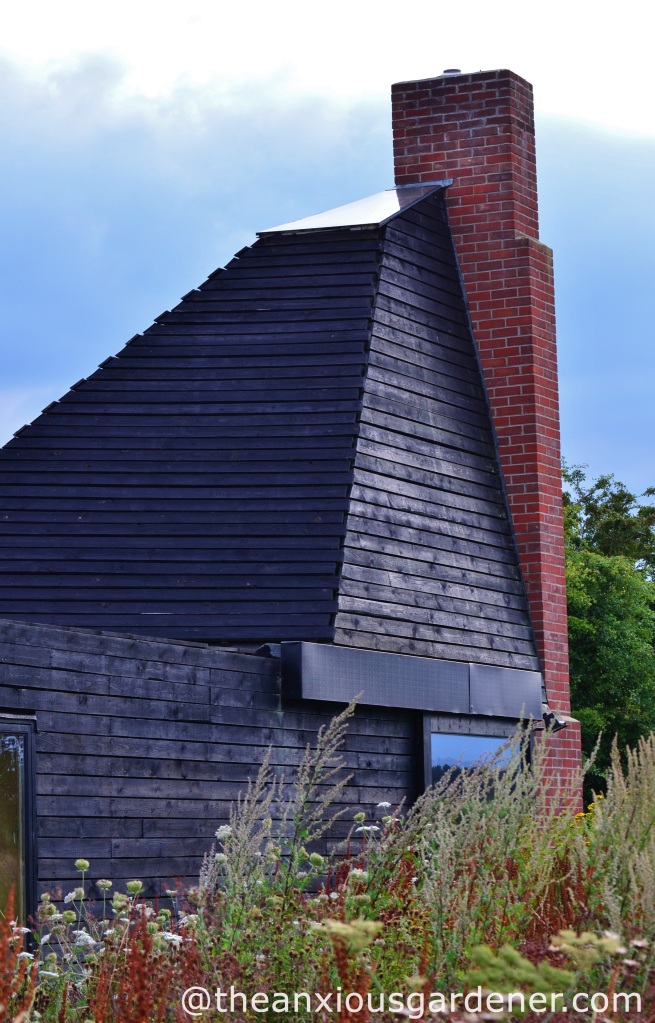 It is an assertive, self-assured build and doesn’t seem to care whether or not you like it: which is just as well as the house is visible from a mile away.

The garden is ideal for a holiday home.  The only regular job is the mowing of lawns (by whoever is staying), framing a large block of tall, native perennials.  This simple layout brings a chunk of surrounding meadow into the heart of the garden – as well as the buzz of bees and rasping of crickets.

Scabious, knapweed, yarrow, wild carrot and the like are jostled by dock and thistle interlopers.  But then dock seed-heads add a pleasing rusty-red and thistle flowers lure in more bees and butterflies.

Where garden meets salt-marsh, sits a mirror-sided studio that whacked my jealousy gene hard.  And continued to jab at it.  I easily imagined myself living here and sitting within this garden-room, supping Earl Grey, periodically tapping furiously at my keyboard, stopping too often and staring out of the window. 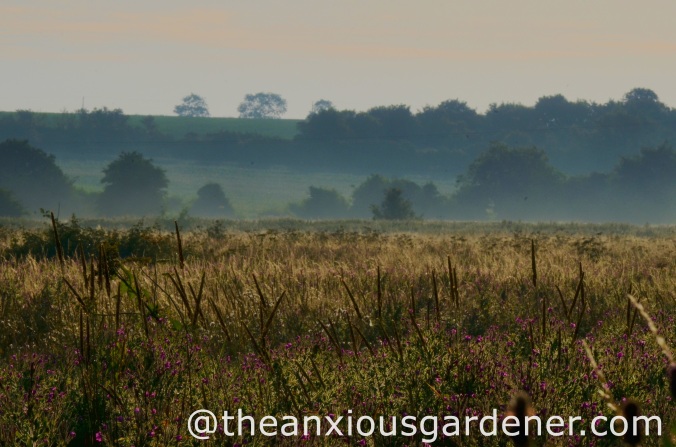 At this view.  The marsh is mesmerizing and

changes almost constantly with the light.

And it is full of marsh-loving birds – as you might expect.  I wasn’t able to get great photos of the bird life I saw but I think this is a (slightly blurred) female reed bunting. 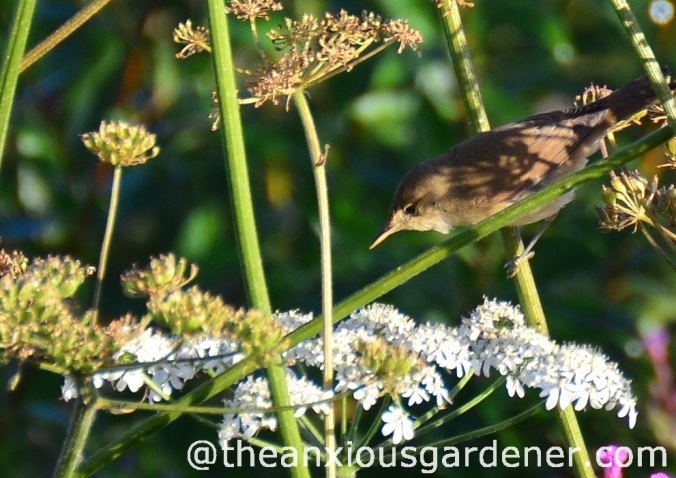 This looks like a reed warbler though it might just as easily be a marsh warbler.  (An expert can have trouble telling them apart … so take your pick). 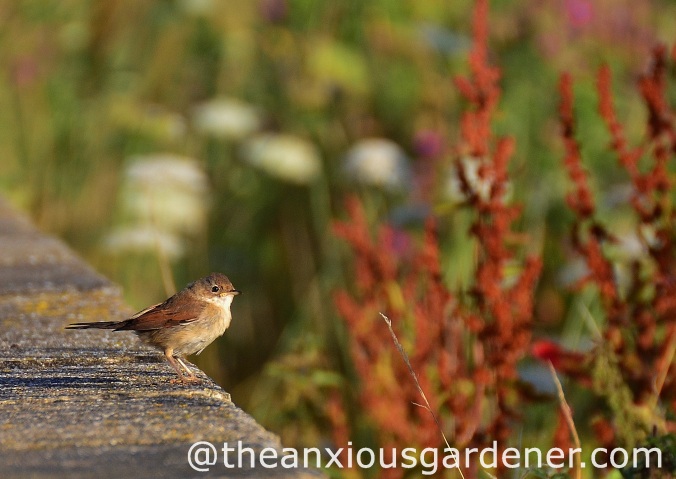 I’m rather out of my confidence zone with ID’ing these small, unfamiliar birds but I’m going to confidently assert that this is a juvenile whitethroat (unless you know different).

On the skyline, beyond the marsh, sits a handsome windmill, and whilst pointing my lens at that, a bird of prey floated into view.  It didn’t come very close and initially, I thought it was a buzzard.

It was only with binoculars that I realised it was much rarer than that.  This is a marsh harrier – one of only three or four hundred pairs breeding in the UK.  I felt honoured to see it – if only from a distance.  (It’s tagged with green for easier spotting and identification, I suppose.  Or else canny advertising for salted peanuts). 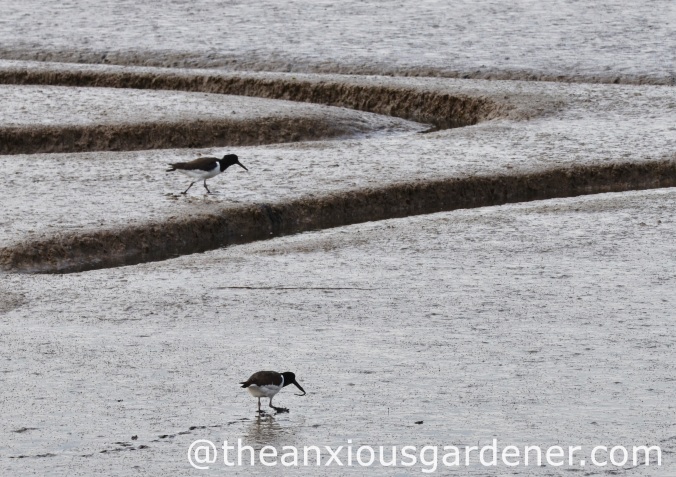 The house is only a short drive from a small seaside town but from there it is a further mile or two to the beach – a long, leisurely walk on sandy paths and wooden walkways beside the banks of muddy creeks and inlets. 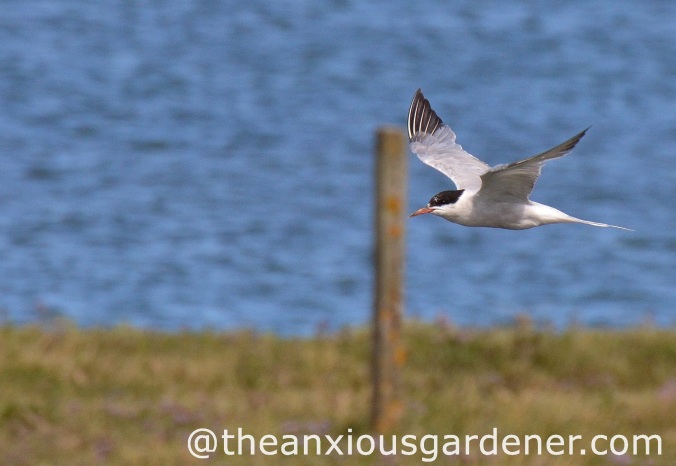 The north Norfolk coastline reminds me of the German Baltic where I spent my childhood summers.

Miles and miles of wide, yellow beaches, backed by dunes meshed together by marram grass.

The boy and Jim

The sea is shallow, shelves gently for hundreds of yards and warm in August.  Not great for swimming, perfect for paddling (after a game of beach cricket and a sandy, slightly gritty picnic).

The following morning we drove to Blakeney and hopped on a boat to visit a seal colony.  It’s what one does whilst on holiday in Norfolk. 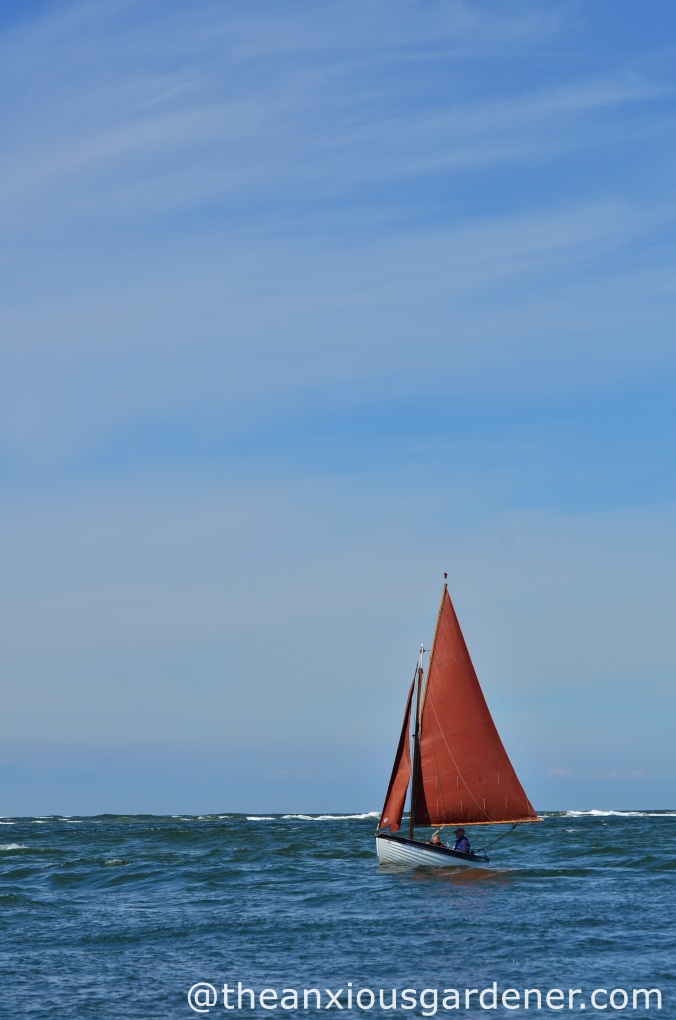 No.  Sadly not in this smashing little ‘Swallows and Amazons’ dinghy.

We could smell the seals before, rounding a sand-spit, we saw them.  A smell of large, hot, fish-eating mammals and their various excretions.  Can you imagine?  Bit like tinned tuna mixed with long-overdue-for-a-change cat litter.  Heady.

The seals are used to groups of gawping humans floating slowly past and barely opened an eye or waved a flipper.

I wondered whether they think boatloads of chattering tourists are laid on for their own entertainment, amusement and curiosity.  If so, the novelty has long waned.

There are both grey and common seals at Blakeney but I struggled to tell which was which.  The grey seal has a longer, more pronounced snout apparently – like the one above?  Its latin name is Halichoerus grypus which translates as “hooked-nosed sea pig” – which isn’t very nice, is it?

This is another grey seal?

After a long, salty, fishy day out Jim and I were astonished (and not a little pleased) that we had finally succeeded in tiring out a 13-year-old boy.  Now that’s a sight you don’t see very often.

42 thoughts on “The Norfolk Coast”