The garden is sailing through spring so quickly.  Though I’ve taken a few photos, I’ve not had the time to show you all of the Priory’s April charms.  Here’s a quick retro peek at a little of what has grabbed my attention and maybe elicited an “Ahhh.” 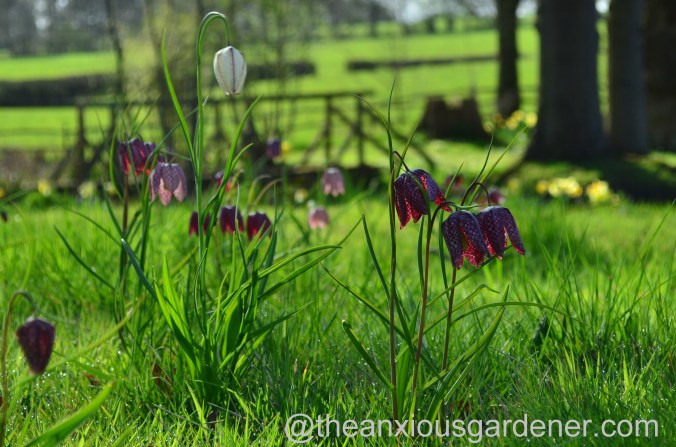 The snake’s head fritillaries (Fritillaria meleagris) have been pretty good.  Not fall-over-fantastic but then I’m resigned to it taking years, decades even, for them to fully colonise the meadow.

But I do have clumps!

And even if some of the flowers are pecked by

him and his chums,

they seem to thrive.

In a couple of months the seed heads will ripen and readily crack open.  At that point, I collect the seed and liberally cast it where numbers are still sparse.  (Profligately throwing fistfuls of fritillary seed about is one of my favourite pastimes.  Now you know).

I’m not embarrassed to announce:  I’m in love with my solitary Erythronium pagoda.  Unlike the fritillaries, it hasn’t spread and this is the only one to emerge from half a dozen bulbs I put in a few years back.   If it can be bothered to flower every year, the least I can do is bother to walk over and admire it.

Blossom cheers up the gardens.

We’re blessed to have a handful of mature cherry trees at the Priory.  They produce fruit too – not that you’d notice.  The birds strip them far too quickly for me to get a mouthful. 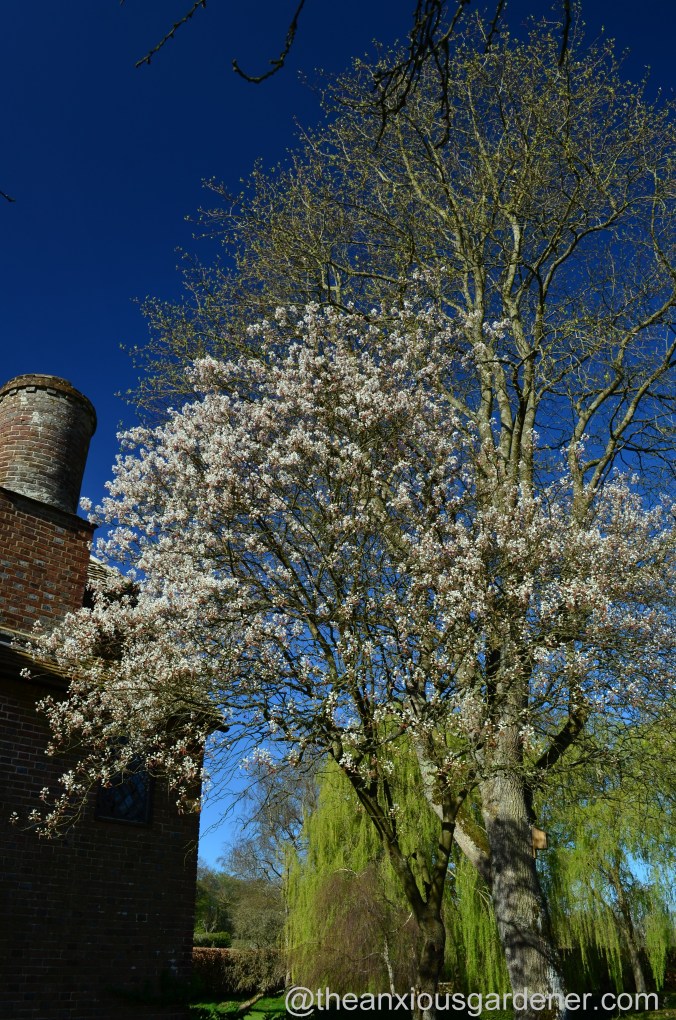 One of my favourite trees at the Priory is an amelanchier.  (I don’t know the variety but suspect it’s A. x Grandiflora ‘Ballerina’.  Anyone?). 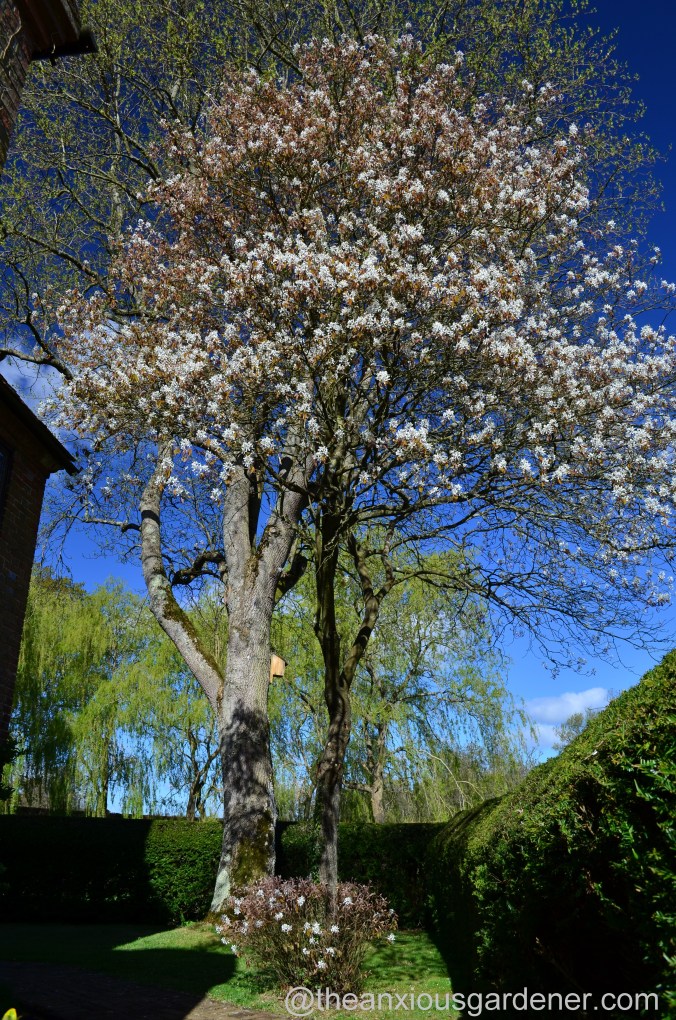 The tree produces suckers which I used to remove.  But I stopped cutting them off (life is so short, isn’t it?) and clipped them to a shape instead.  I thought I’d make a feature of them … a pot?  A base?  A stand?  Call it what you will. 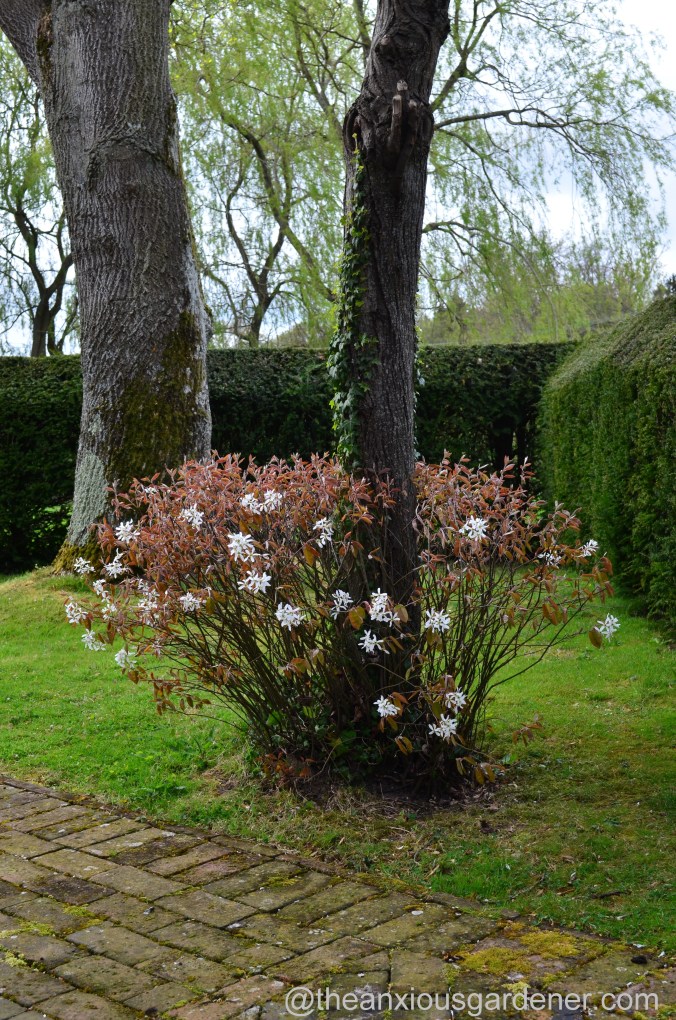 But when it too flowered, I’ll happily admit to an “ahhh” (and made a mental note to remove that ivy).

Don’t you just love a tulip that comes back year after year?  Here’s one that has done just that – Tulip ‘Spring Green’.  This subtle beauty is easily lost amongst tall, verdant, herbaceous growth but here it sings out against an old lichened wall.

And rewards close regard. 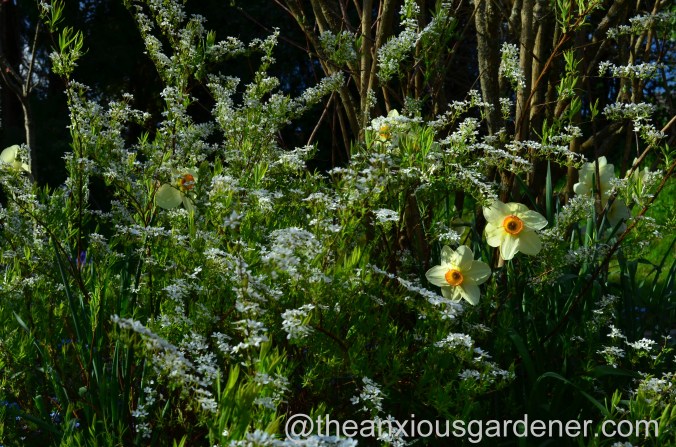 I never saw the point of spiraea.  Until, that is, I bothered to read up about it.  Now that I know it flowers on old wood and pruning back hard in winter or spring is a BAD idea, it flowers freely.  I’ll chalk that one down to experience.  Again I don’t know the variety.  Spiraea thunbergii do you think? 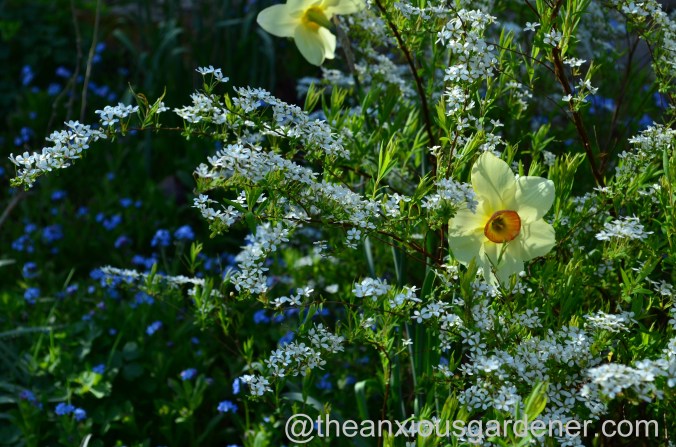 Swaying about in a breeze with an underplanting of forget-me-nots and daffs, it does grab my attention and brings me to a halt.  And actually, you can’t ask much more of a plant than that.  Can you?

I posted recently about the bank below the greenhouses and prattled on about how pretty it is.  Well since that post, and left to its own devices, it’s got better still – mostly smothered with wildflowers.  It fair sparkles.

Above the bank, its new leaf shimmering, is the young dogwood hedge.  I planted it to part-screen the ‘houses and this is only its second year. 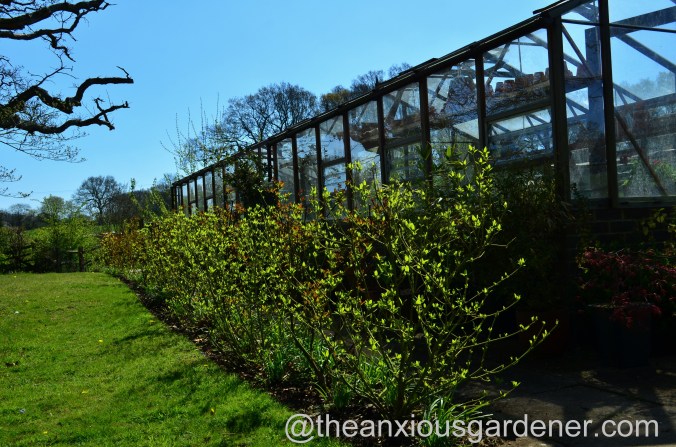 What about Kerria japonica?  Bit blousy?  Bit naff?  Possibly both but I’m fond of the yellow pom-poms anyway.  This particular plant went in several years ago as a tiny, barely rooted bit of stem tugged, without ceremony, from my garden.

This is its first proper flowering and I’m rather pleased.  I’ve worked in gardens where kerria is a brutish, twelve-foot high thicket.  Mine sits beneath a large alder, its feet amongst nettle and ground elder.  Brute away my friend.  Brute away.

Way up on the drive (several hundred yards from the house) is a forsythia.  When we cut the mixed hedging in July, we cut this too.  Quite hard – otherwise it shoots out over the narrow tarmac.  July is a little late for cutting forsythia (it ought to be done straight after flowering) and this one usually sulks the following spring.  But this year it has flowered quite nicely.  (With another cherry tree, unnoticed for most of year, shouting, “Me, me, me!” behind). 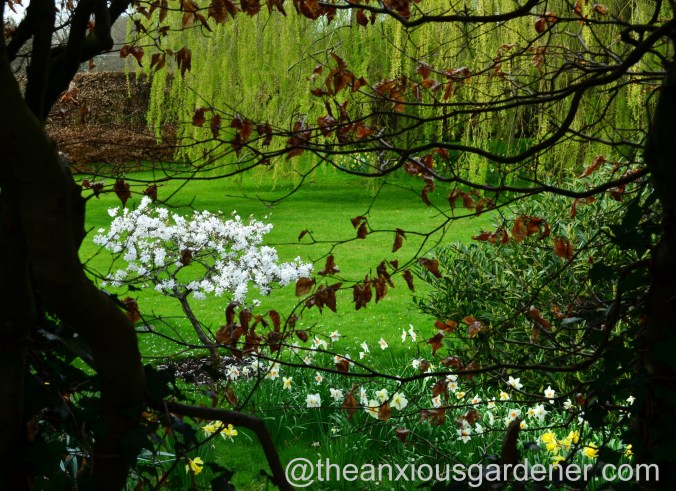 The gardens are finally coming to life – now the won’t-be-rushed Priory is finally under way.  She is a tardy lass.  But I can forgive her that.

41 thoughts on “Steady As She Goes”