Every couple of years, my brother resolutely shakes his head, and says “Don’t be absurd” and “No, never again” and “Not after last time.”  But eventually, after I’ve wheedled and whined and nipped, he groans, throws up his arms and finally agrees to come travelling with me.

On our last trip together we visited Poland (see ‘A Postcard From Poland‘) and liked it so much, we decided to return.  Two weeks ago, we flew to Kraków, picked up a hire car and drove here:

the Noma Residence  – a charming, if ridiculously Hansel und Gretel, hotel.  This region was German before the Second World War and the Noma is obviously, blatantly Deutsch.

Were there any doubt, displayed inside are photos of Kaiser Wilhelm II posing on those steps.  In one he hefts a shotgun and looks like he has spent a satisfactory day blasting anything and everything – including some of the staff.

Built in the 1860’s, this hunting lodge is beautiful: totally fairy-tale, festooned with crazy detail and quite mad.  Why have plain functional dormers when you might have Christmas tree ones?

And it had never occurred to me to stick a huge wooden stag’s head on my roof. 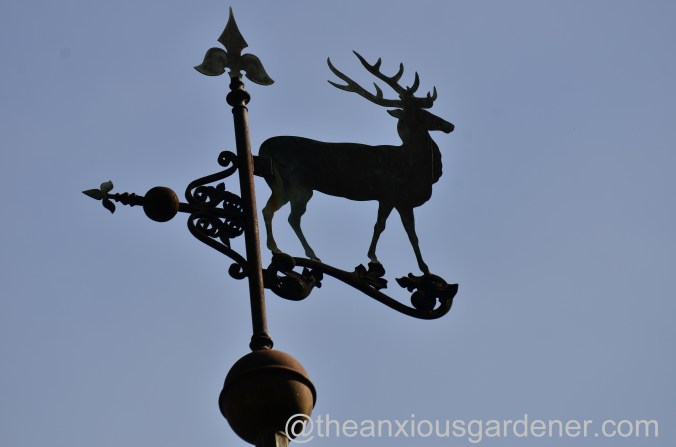 Inside, the hotel walls are decorated with hundreds of antlers and countless heads of trophy animals.  I tried to be impressed but I’ve always found taxidermy a bit creepy.  (The large bear lurking under the staircase gave me a particular turn).

We stayed here for two very comfortable nights indeed; efficiently, silently working our way through tremendous, varied breakfasts before waddling out to the terrace to sip our coffee and listen to the cuckoos (regretting we’d packed no lederhosen). 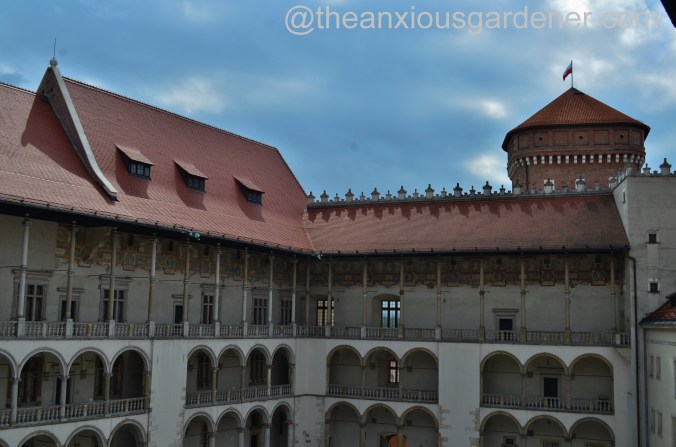 We returned to Kraków … but sadly only for one day.  Did you know how impressive Kraków is?  I didn’t and with little time available, I’m afraid I took hardly any photos.  I have no shots of the massive, jaw-dropping town square for example which, to my mind, blows raspberries at those of Brussels, Bruges, Amsterdam (insert city of your choice). 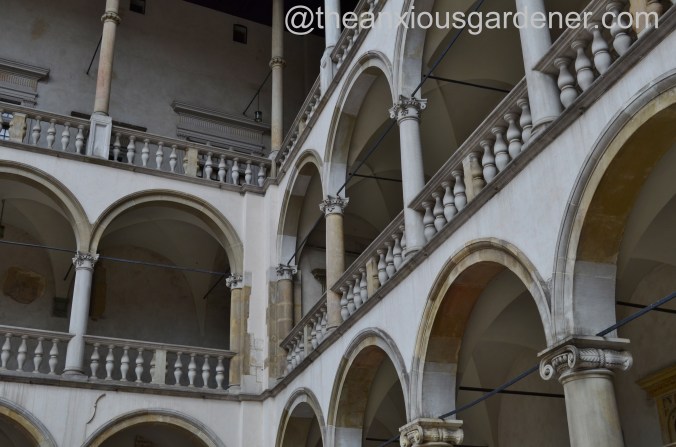 I did manage a couple of snaps of Kraków Castle

where we batted away crowds to see da Vinci’s ‘Lady with an Ermine‘.  It was worth the effort (if marred by a guide and her entourage standing immediately in front of the painting for an epoch.  Eventually I grabbed a sharp stick and jabbed them out-of-the-way).

Our time in Poland was far too short and too soon, we leapt on the sleeper train for Prague.  Rattling through central Europe in a single berth cabin is the way to travel, I’ve decided.  Our steward kept the Pilsner flowing as Pete and I sat chatting in my compartment till the early hours.  Later, as I nodded off in my comfortable bed, rocked to sleep by the motion of the train, I half feared to see Ingrid Bergman, Michael York, Vanessa Redgrave and the rest leaning over me with a glint in their eye and a sharp knife poised above my chest.  Didn’t happen.

I’ve visited the Czech Republic’s capital before and liked it.  But after Kraków, it seemed a lesser destination somehow.  But then most cities would struggle in comparison with Kraków (yep, it really did impress me that much) and Prague is still a beautiful city; and I had time, at last, to wander about with my Nikon. 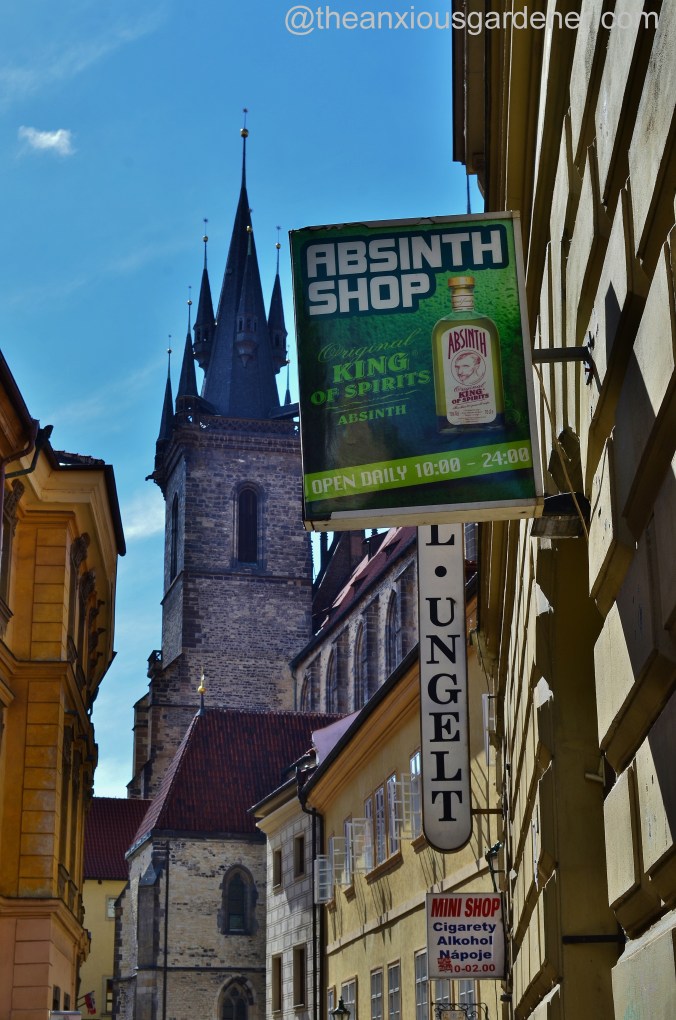 For your benefit, and that of science only, we tried a miniature bottle of absinthe.  DON’T try this at home.  At 70º degrees proof this is a tipple for the committed, grown-up drinker only.  Having sated our curiosity – overcome a coughing fit, dabbed our eyes and regained the power of speech – Peter and I agreed, slurringly, that we need never repeat the experience.  Ever again.  Absinthe is one for the bucket list only.

I’ve wanted to point my camera at people rather than just plants, wildlife and landscapes.  A bustling city seemed the place to start. 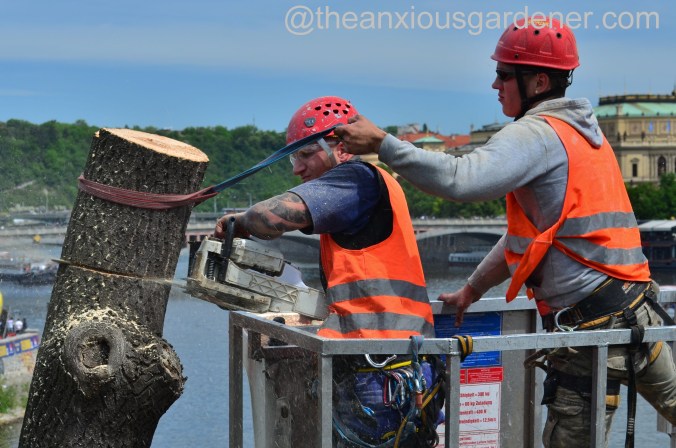 A pair of tree surgeons drew a small crowd on the Charles Bridge.  Not that interesting, I agree

until you see just how flipping high they are.  No way would you get me in that thing.  No way … and this shot still makes me giddy.  (As does the thought of absinthe).

A Czech folk festival provided plenty of subjects, if not always smiles.

Funny how a single snapshot might be misinterpreted.  The girl on the left seems to dislike the two smirking ones

but perhaps not, after all – unless she’s faking.

I’ve made some of these black and white simply …. because. 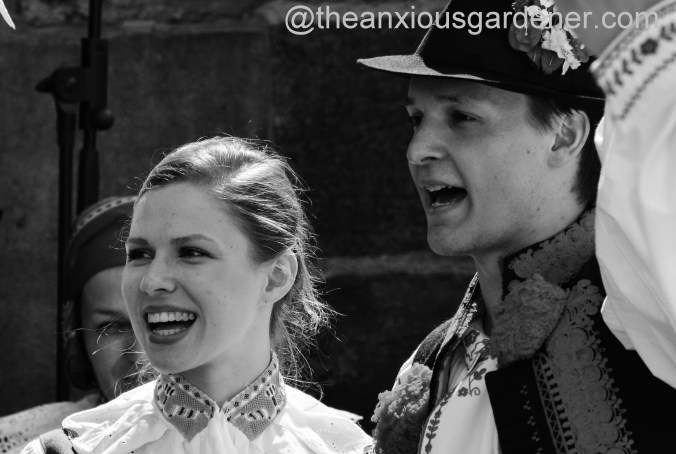 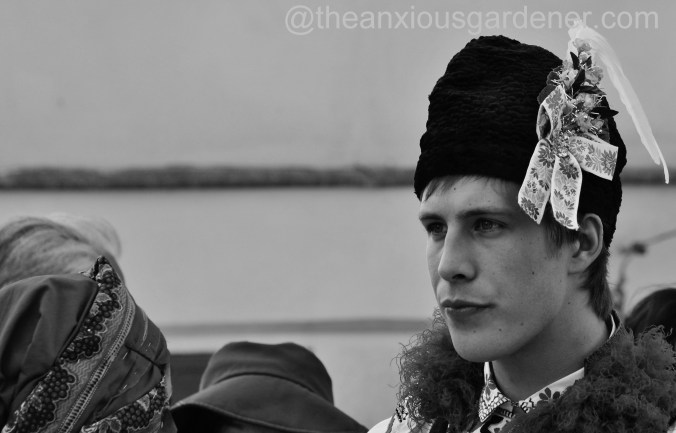 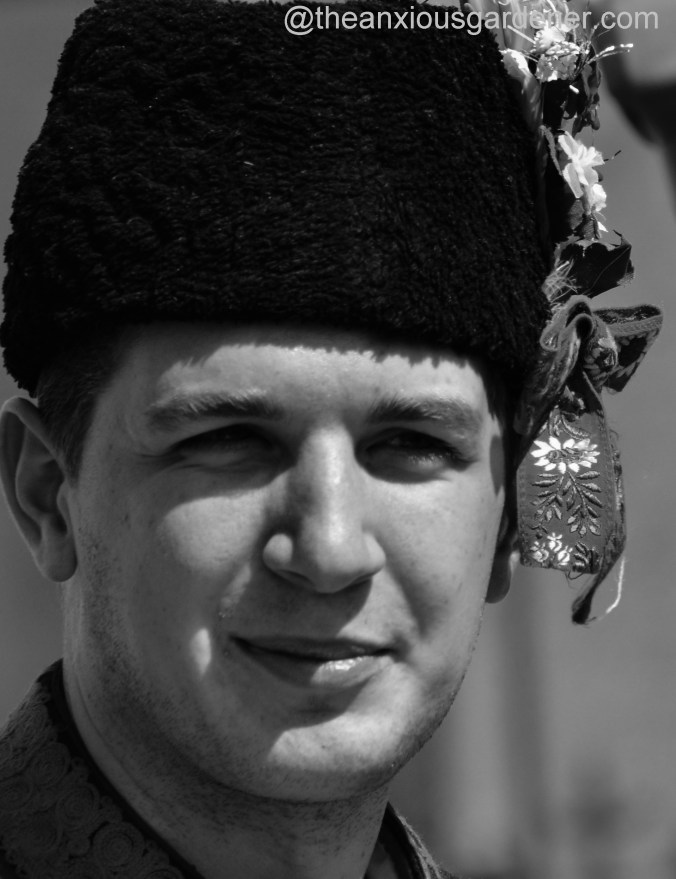 But I need colour to show off these fantastic costumes.  I love the woman’s sleeves and rather fancy the same.  I could keep my secateurs in them … and my sandwiches, for that matter. 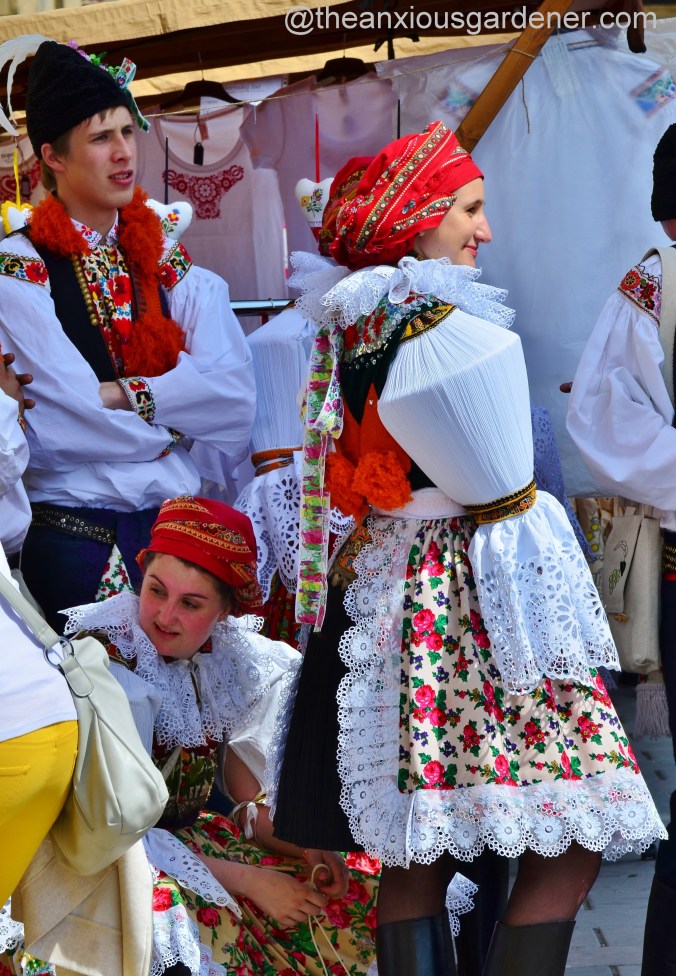 but not for long.  What had the bending woman done?  Perhaps inadvertently?  It’s probably best we’ll never know. 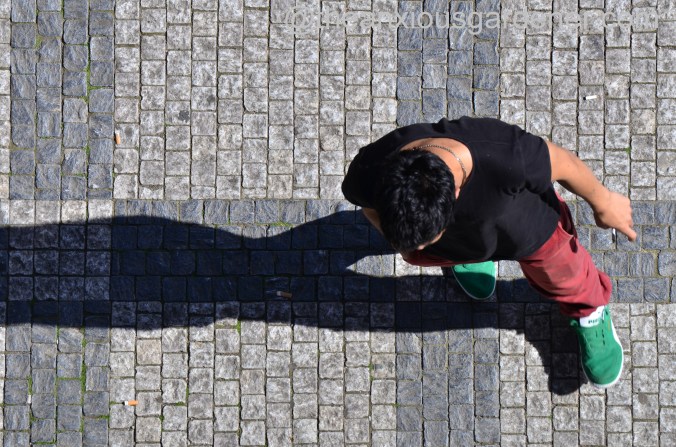 A chap pacing outside our apartment has a crafty fag. 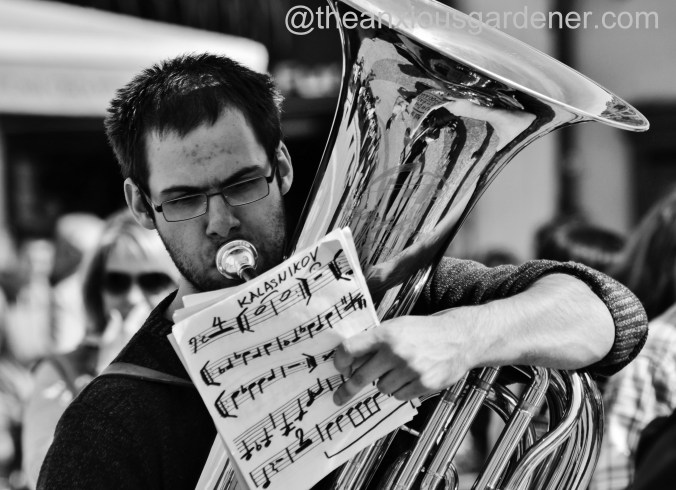 They were so accomplished and jolly, I bought their CD.  If you’d like to hear a sample of their music, click here.

The crowd loved them and so did I.  Why, I even tapped my foot.  But only in an embarrassed ‘we-don’t-do-this-sort-of-thing-normally-do-we-and-it’s-all-a-bit-awkward-isn’t-it?’ English kind of way.

I can’t resist a bit of oompah. 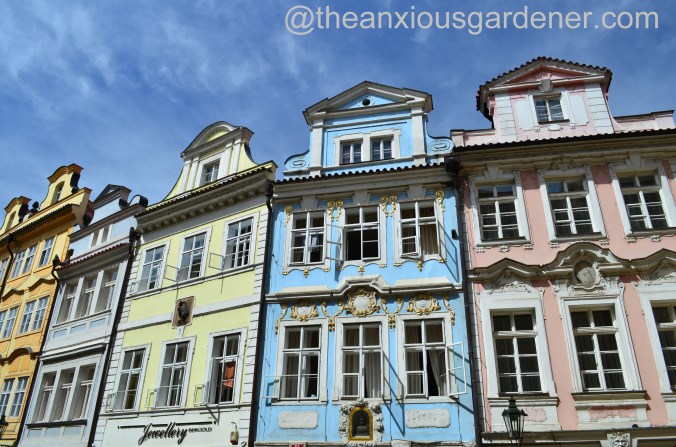 Prague?  Pretty, very lively but maybe too crowded for a Sussex gardener. 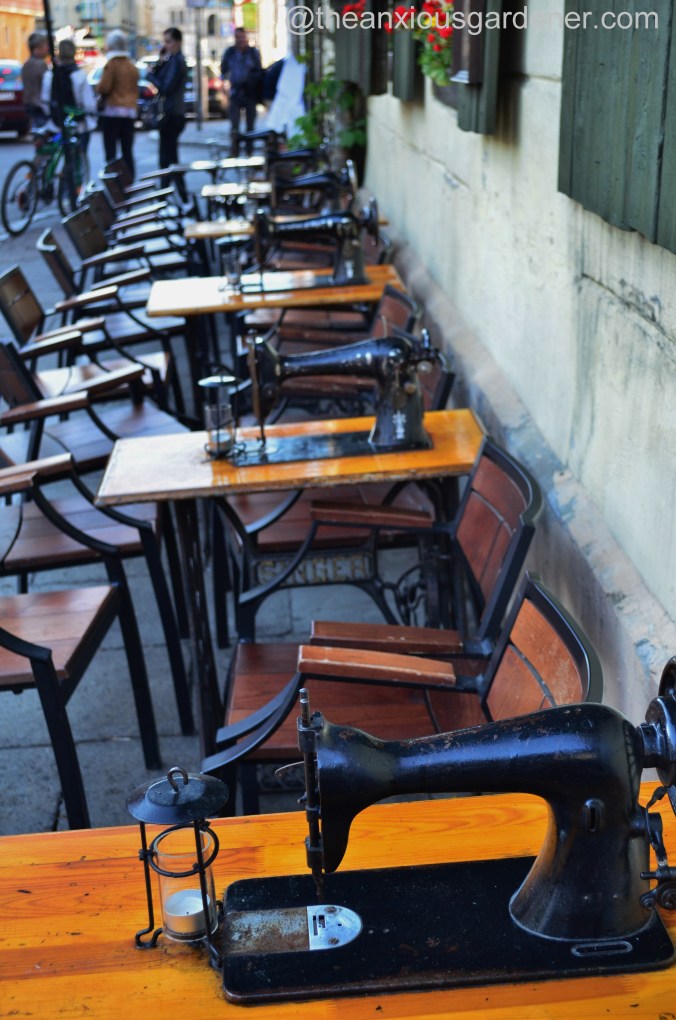 Kraków café.  Here’s a use for all those sewing machine tables in your garage

Kraków?  Cracking city.  Just go!  Book your ticket and go.  I intend to.

26 thoughts on “From Krakow To Prague”