In a quiet crease of the South Downs lies Charleston Manor.  It is somewhere I have long wanted to visit and so, when I heard that the gardens were open, I almost fell over with excitement.

After a pub lunch in nearby Litlington, we trundled up the yew-lined drive, to the house. 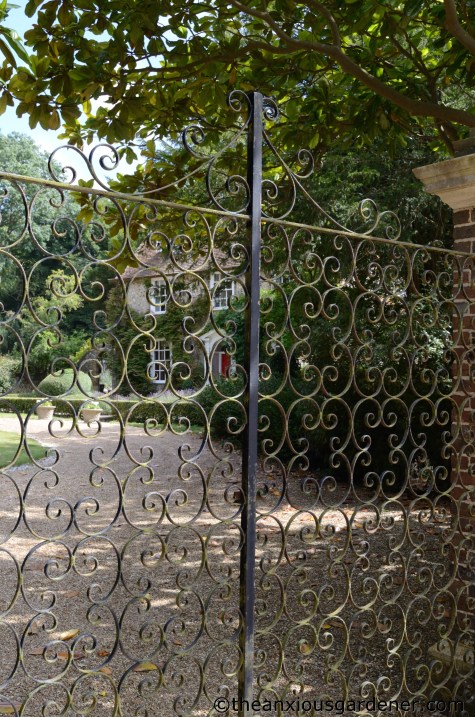 The house itself wasn’t open but I pressed my face up against the gates anyhow and peered in longingly (rather like I used to stare at the Priory – before I worked there).  Then I nipped around the corner … 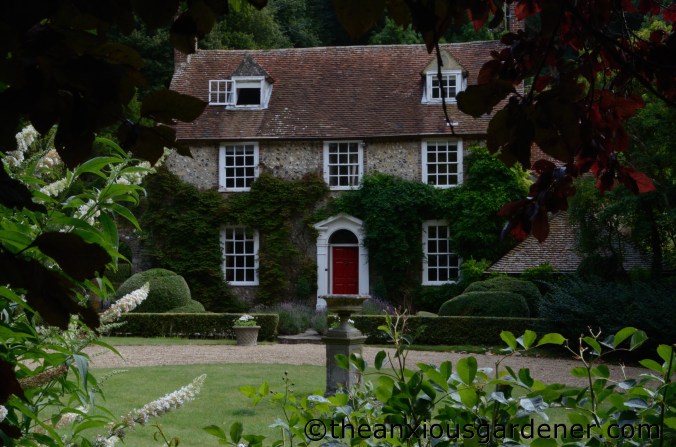 … stood on tip toe and got an altogether better view.  Parts of the house date from 1170-80, should you wonder. 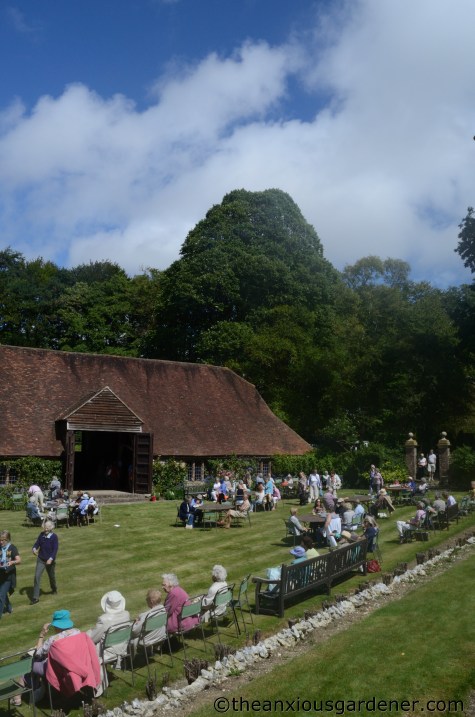 On the lawn, alongside the Great Barn, we sat down for tea and cake.  First things first.  I have photos of friends and I feeding – but I shan’t post them.  No one deserves that.

Against the south wall of the barn is a simple but effective planting of agapanthus and white valerian.  A nice idea to nick. 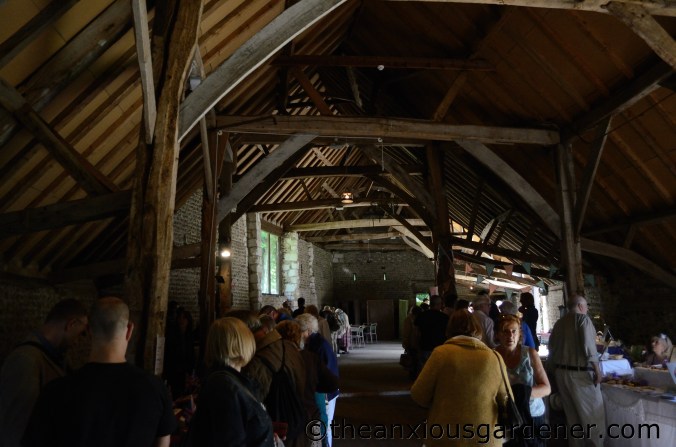 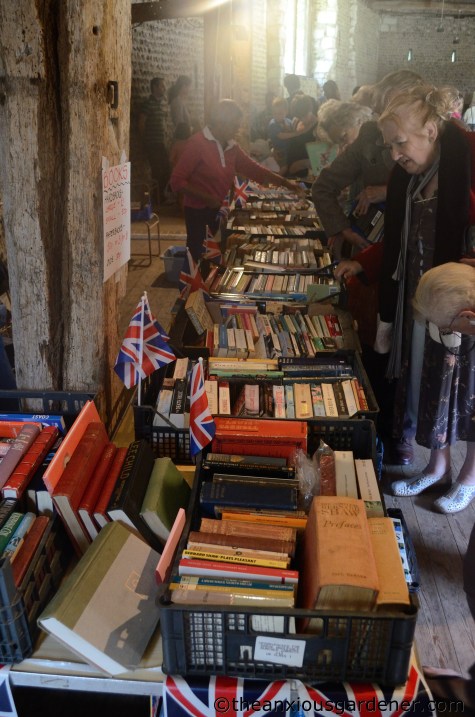 Wandering about the grounds, I was thwarted by another iron gate.  Don’t you just hate that?  But again … 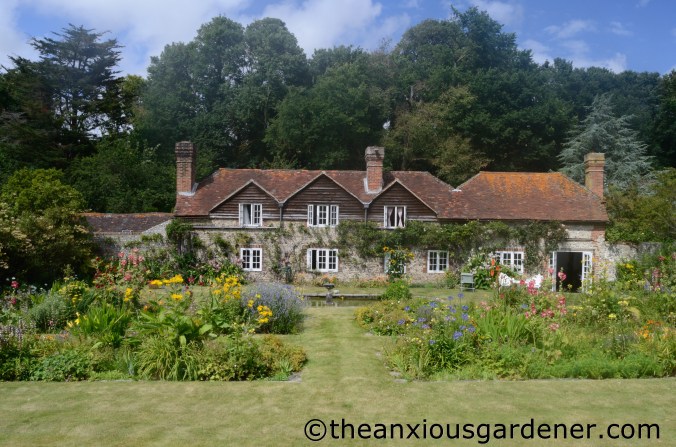 … a quick charge around to one side, gave me a view into a pretty, private garden.

I was whimpering to get in there and have a good root about.

At the western end of the grounds is a large lake, graced with water lilies.

And I did try to be happy for the owners as (unlike at the Priory) they have no duckweed.  I did try.  Honest, but I failed.  Jealously is a strict master.

Part of Charleston Manor is covered with winter jasmine.  We have a great deal more of it at the Priory and I can’t decide whether it works.  It looks better here and I’m not sure why.  Growing against flint rather than brick, perhaps?

Nearby, the Clock House has climbing roses with … 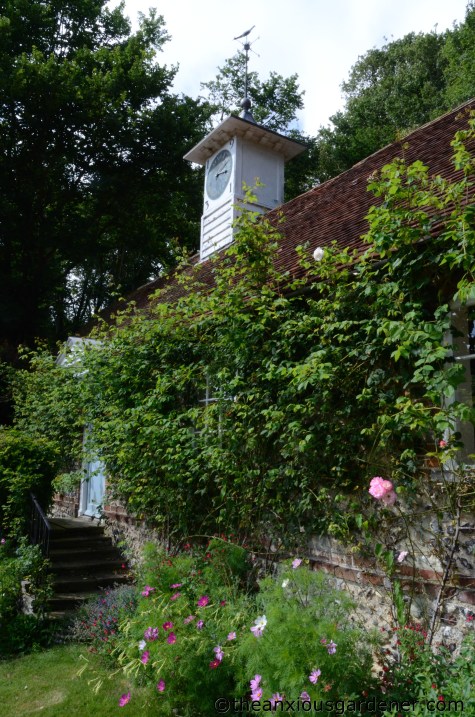 … cosmos out front: a reminder for me to grow the latter again next year.  I didn’t this year and I miss it.

Jealously again took a hold of me when I saw this laburnum tunnel.

I carefully made a note of how it was laid out – just in case I ever get the chance to plant one.  I should love to see it in flower. 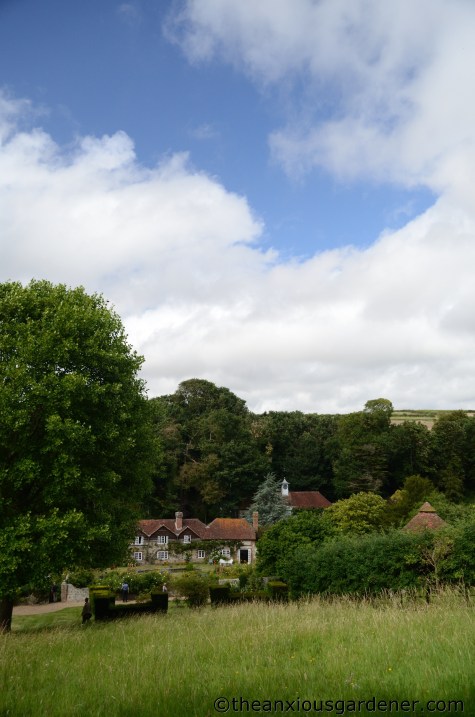 From the slope above the laburnum tunnel and a wildflower meadow, I was able to gaze down into the Manor gardens …

… whilst off to my left, I had a view across the Cuckmere valley to the Litlington White Horse.  This isn’t an ancient chalk figure – it dates either from the 1830’s or the 1920’s.  (More information here).

As if the afternoon wasn’t quintessentially English enough, they laid on a brass band.  Would it be churlish to note that a few notes were off-key?  Probably … but I don’t think anyone cared.  I certainly didn’t.  It all added to the charm, as the music tootled out over the sunlit valley.

I tell you what.  I should like to work at Charleston Manor.  The gardens are not pristine nor are they exquisitely manicured – that would need a very large gardening team indeed.  No, instead there is a gentle rough and tumble-ness to Charleston.  Large areas certainly do need attention, including a huge walled kitchen garden (not open to the public but I managed a sneaky look).  The potential is great and it would be fine to have it looking as it must have done in its prime.

I wonder whether they have any vacancies?