In a previous post, I mentioned how the midday hoot of a tawny owl – and my thwarted attempts to see him – had driven me nuts.  But that was nothing … nothing … compared to the song of a certain bird which has sent me doolally.  This unidentified bird sings a simple refrain, over and over (and over) again but however hard I tried, I couldn’t see the pesky culprit.  I checked birdsong audio files on the websites of the RSPB and BTO to no avail.  I told Jim about it but he couldn’t hear the song – even when I could – and only shook his head, looked at me sadly and gently suggested it existed only in my head.  I clenched my teeth but feared he might be right.  Then, one morning, Jim DID hear it.

But, his ID suggestion that it was the beep-beep of the Road Runner was unhelpful and met with stony silence and a hard stare. 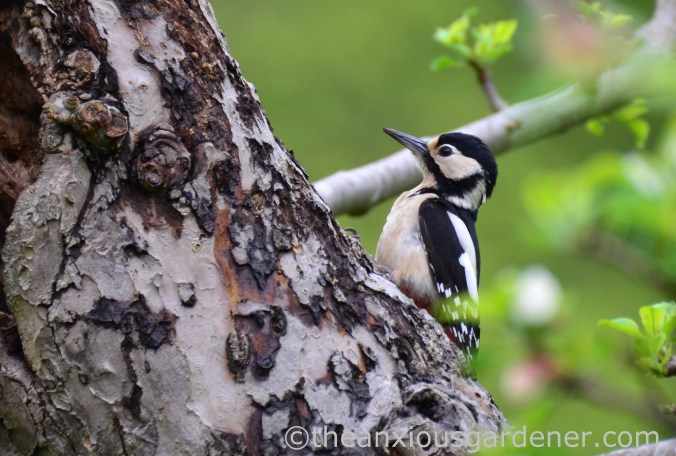 I needed proper help – Jim –  and after a quick search online, I found a phone app called BirdUp.  I love BirdUp.  BirdUp is free.*  Hoo.  It is ad-free.  Rah.   And it does what it says it does.  Hoorah. 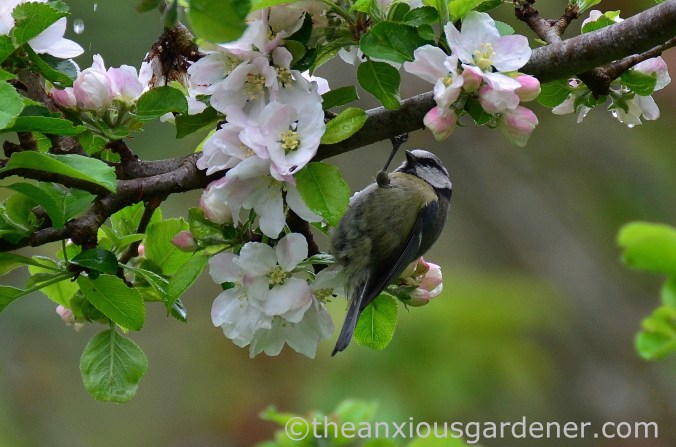 Blue tit (you knew that)

The app identifies and records birdsong.  I tap the icon, point my phone’s microphone at a particular birdsong and, very often, it tells me which species is singing.  Brilliance.  But … it only works for a selection of British birds; doesn’t like background noise (planes, trains, automobiles and the like); nor a strong breeze blowing across the mic.  Neither can it cope with a chorus of different birds singing at once.  Even so, it has identified several common birds by song alone.  How clever is that?

Last week, I was sitting beneath a conifer and BirdUp told me that a high-pitched song above my head was that of a goldcrest.  The app has various built-in, playable bird songs and calls.  I played the goldcrest pre-record and within seconds a hitherto invisible, but now indignant, goldcrest appeared to see off the virtual intruder.

I don’t really need to tag these, do I?

I did the same with a hidden robin – who promptly showed himself too.  (I stopped at that point.  Birds have quite enough to do at this time of year without teasing from imagined rivals).

No, I think not

But I still didn’t know the singer of that infuriating refrain.  I began to suspect a male blackbird but neither BirdUp nor various websites had recordings of the notes I could hear.   I read up about blackbirds and learnt that they are great mimics: copying common sounds, such as car alarms or phone ring-tones – and a penny clunked to the bottom of an otherwise empty tin.   And then, reader, I saw him.  Sitting high up in a tree, a male blackbird singing that bloody song.  And he isn’t alone: there is at least one, perhaps two or three others, singing from the same sheet across the garden.  Using the app, I recorded the song and, to share my pain and give you a taste of how repetitive it is, I’ve looped it several times.   Here it is:

It is pretty enough but after you’ve heard it for hours on end, all day long, the charm wanes.  Jim and I still laugh about it … through increasingly fixed grins … though we still don’t know what sound the blackbirds are copying.  Do you? 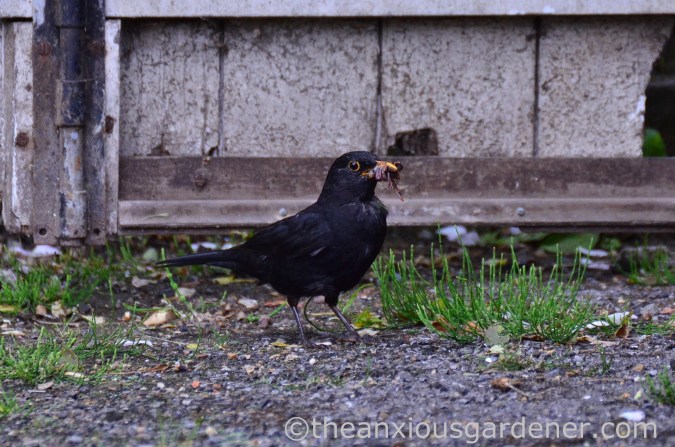 (I wasn’t asked to review this app.  I just really like it.  BirdUp by Jon Burn is available at Google Play but, as far as I can tell, not on iTunes).

45 thoughts on “Birdsong And What To Do About It”