Jim picked me up from work at The Old Forge yesterday and, as I loaded my tools into the car, told me that he’d almost driven over a sparrowhawk crouched on the lane leading up to the house.  Luckily, he had braked in time and the bird flew away, as did an injured pigeon it had caught.

Buzzards circling lazily overhead are now a common sight on the South Downs; but other than those and an almost tame host of wild rabbits eyeing this gardener with ill-concealed contempt, I hadn’t seen any wildlife of interest whilst working and felt a little peeved at missing an up-close bird of prey.

After locking up the outbuildings and casting a satisfied eye over the freshly mown lawns, I climbed into the car, ramped up the air-conditioning, took off my sun-hat and gratefully grabbed the proffered can of cold coke.  It had been a long, hot, tiring day’s mowing.

Pulling away through The Forge’s gate and onto the road, we were both excited to see that the sparrowhawk was back.  With its recaptured prey. 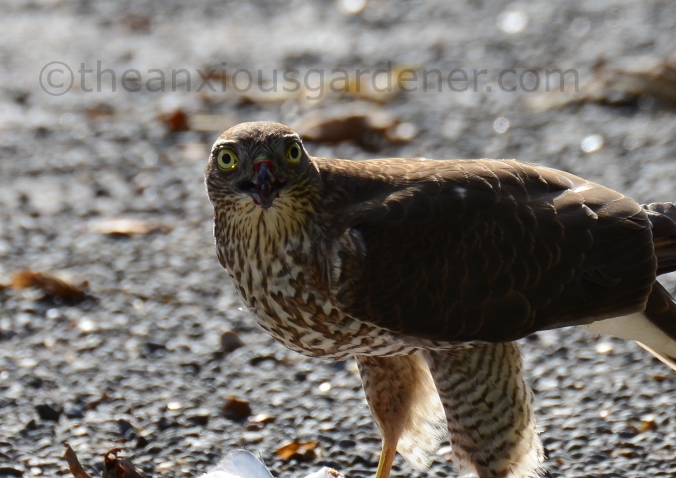 Jim cut the engine and we coasted to a slow halt feet from where the hawk tore at the freshly caught pigeon.

Feverishly, I fished about on the back seat for my camera bag: unzipped it, took out my Nikon, removed its case, unlocked the standard lens, placed it carefully on the dashboard, found my telephoto, took it out of its case, attached it to the camera, took off the lens-cap, turned on the camera, pressed buttons and swivelled dials, looked through the viewfinder, swivelled dials some more – all the while knowing that the hawk would be long gone by the time I was finally ready for my first shot. 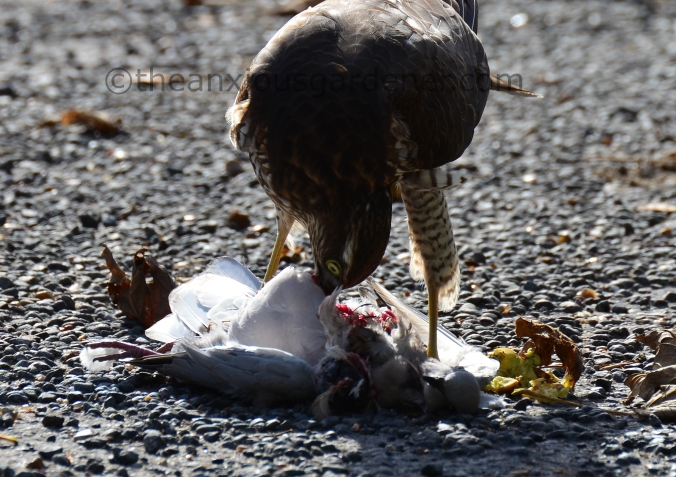 But it wasn’t.  As their name suggests, sparrowhawks hunt small birds and it’s a little unusual for them to catch something as large as a pigeon.

This female wasn’t about to abandon her bounty to a couple of gawking bystanders. 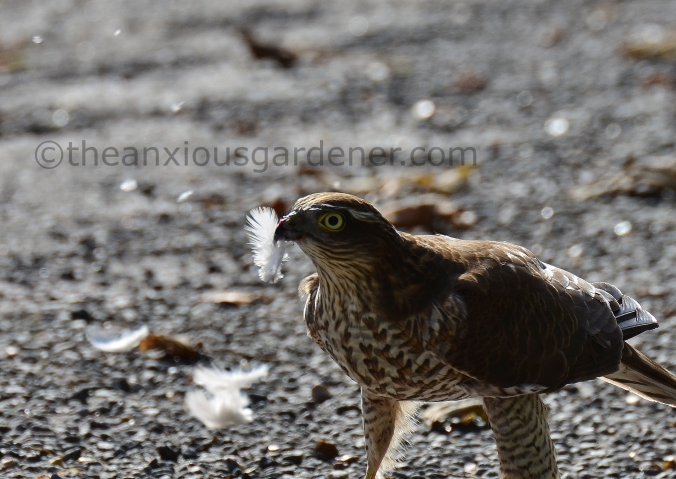 I see sparrowhawks often, close up even, and only once when I had my camera in hand  but usually they’re up and away as soon as I stumble upon the scene.

Today though, our car served as a perfect bird-hide and this Accipiter nisus, unconcerned by a stationary silver box, continued feeding.  Messily. 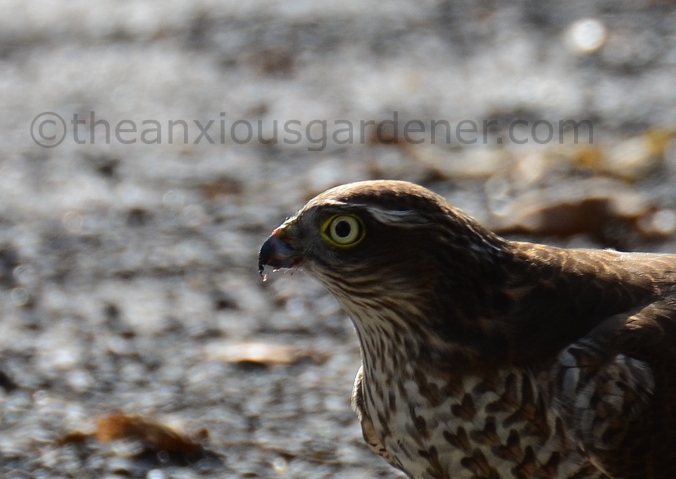 So often when photographing chance wildlife, I have seconds in which to take a shot and  usually in poor light too.

But yesterday, the soft afternoon sunlight backlit the raptor beautifully and I couldn’t believe my luck – and the unexpected camouflage gifted by our shabby, old car.

But however thrilled we were by her gorgeous markings, her stature, her presence, her pantaloons; this was a gruesome scene with sharp beak tearing off chunks of flesh.  Especially gruesome because for overly long minutes, the pigeon was still alive.  This was no clean, quick kill.

After a while, and with the pigeon now mercifully dead, she grasped its body with her talons and flew down the lane, landing in front of a farm building.  Jim started the engine and we rolled after her, pulling up alongside.

It is always exciting to see a terrific wildlife scene worthy of a David Attenborough voice over;

if only on a quiet, Sussex byway – rather than the Serengeti or the Himalaya.  But watching that hawk eating her still-alive prey was pretty horrid and not a thing I needed to see.

My close relationship with the natural world is a marvellous bonus to gardening but occasionally it reminds me – vividly, starkly – of how indifferent to suffering that world truly is and just how precarious life is.  The sparrowhawk wasn’t being cruel in eating her quarry alive; she simply wasn’t aware, didn’t care.

The hawk’s feast and the pigeon’s demise was a bit of a conversation dampener on our short drive home.

Thursday’s encounter reminded me of two similar wildlife posts on my blog which you may not have seen: The Bedraggled Kestrel – about an even more intimate hawk encounter – and The Stoat and the Pigeon.  In the latter, and as you might guess, I’m afraid there is no happy ending for the pigeon.Save

41 thoughts on “The Sparrowhawk”