It has been a terribly long wait since The Priory had snow enough to show and tell: a five-year wait.  The Beast from the East didn’t bring huge amounts of snow to my corner of Sussex; but if we were spared the havoc meted out to parts of the Kingdom, we had sufficient for me to lose several day’s pay.  But on Wednesday morning the skies cleared and keen to see The Priory wearing her rare cloak, Jim and I braved the roads to drive the half hour from our home, left the car on the road and walked down the drive. 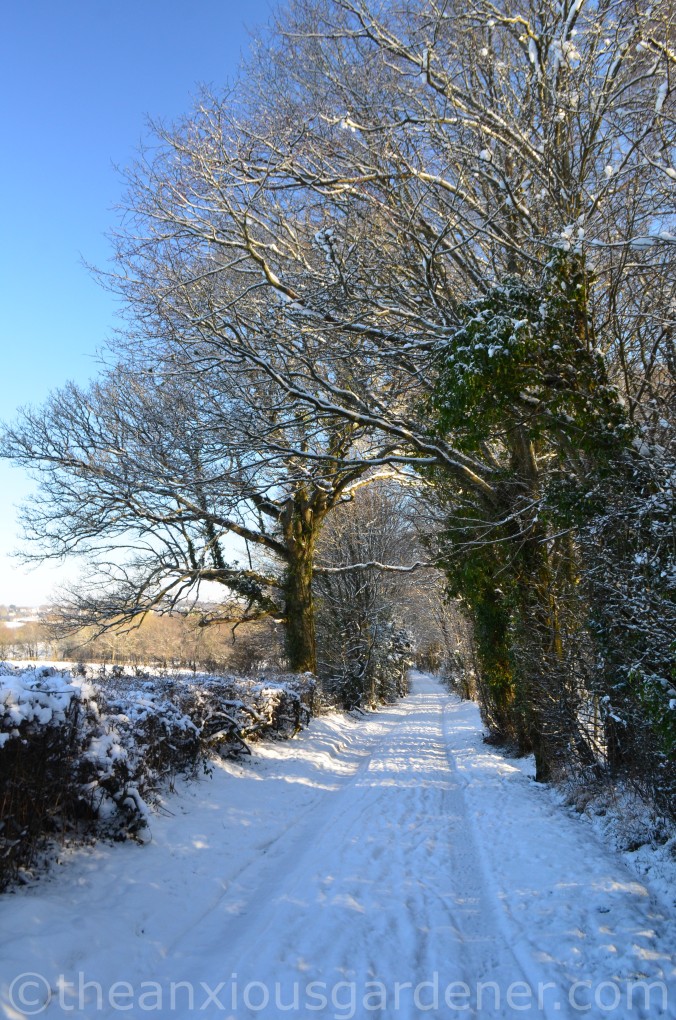 A four-by-four might have coped with this icy slope the day before,

but I know from bitter experience that an ordinary car might not.  An hour of side-sliding and back-sliding in my own car, with spinning wheels under a pall of burning rubber, tends to stick in the mind.  As do memories of The Priory owner’s car marooned down below for several days. 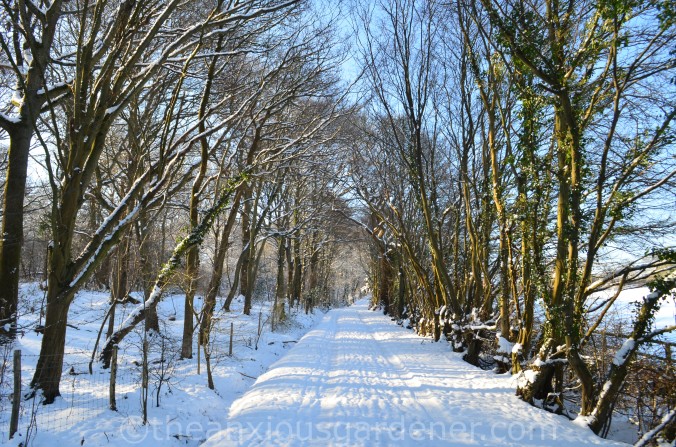 Looking back up the drive 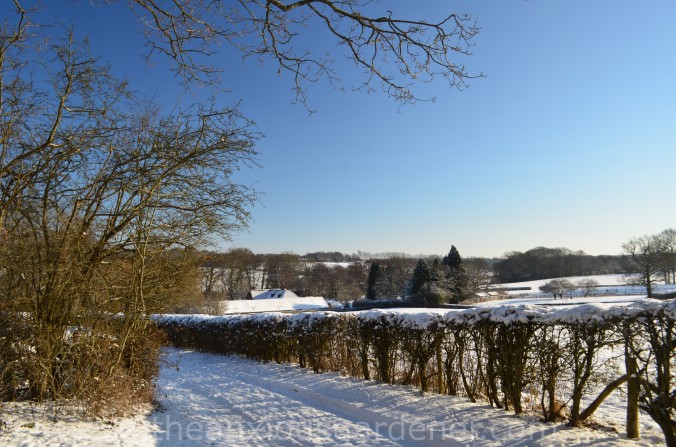 but as I emerged from the wood and gazed down over The Priory a lazy, northerly sent the temperature way down further still, to well below my boots.  (In Yorkshire an icy, cut to the bone wind is called a Lazy Wind.  Too lazy to go round you, it passes straight through).

There was precious little warmth from bright sun above Margaret’s fields.

In the gardens, the snow wasn’t as deep as I’d hoped for nor the trees as smothered.  But it was exciting to see the place under a decent mantle again; with gusts of wind whipping up flurries to quickly bury footprints.

Unsurprisingly, the east pond was frozen; 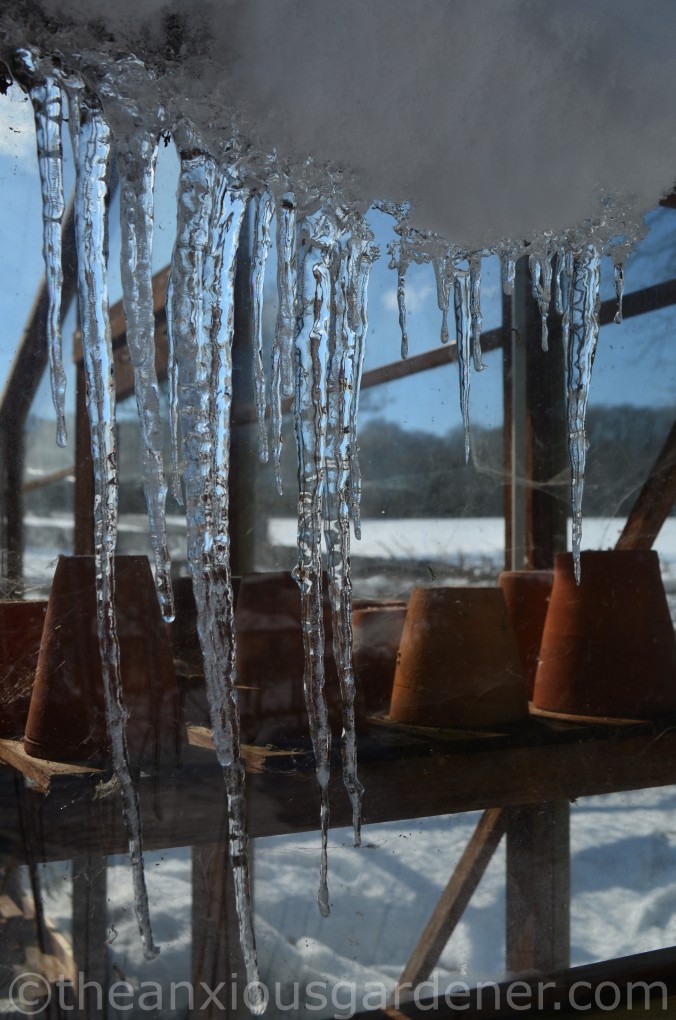 and naked oak branches were picked out beautifully by white dusting;

their undersides lit up by reflection from the snow. 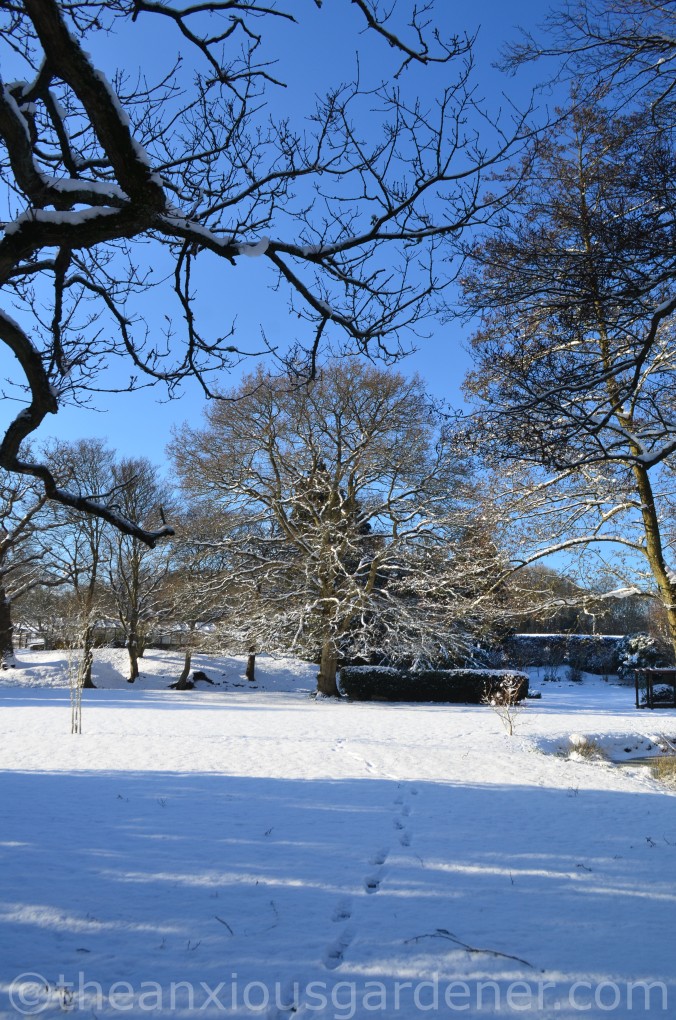 I set out on a well trod, anti-clockwise circle of the grounds, 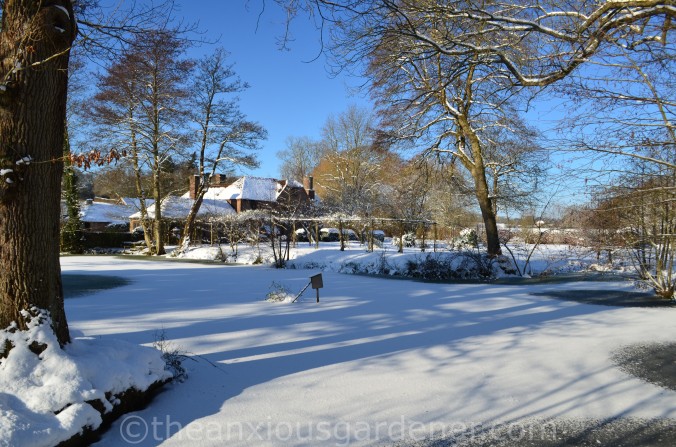 and crossed the footbridge for a good view of the house.  I wondered momentarily whether the ice was thick enough for me to walk across … but nah.  I wasn’t feeling quite brave nor foolish enough to try.

As I stood focusing my camera on some pollarded willow still in need of pollarding, a mandarin duck shot out noisily from under the bridge beneath my feet.  Being of a jumpy disposition, I jumped (and possibly squealed) and only just avoided slipping forward and testing my walking on ice quandary. 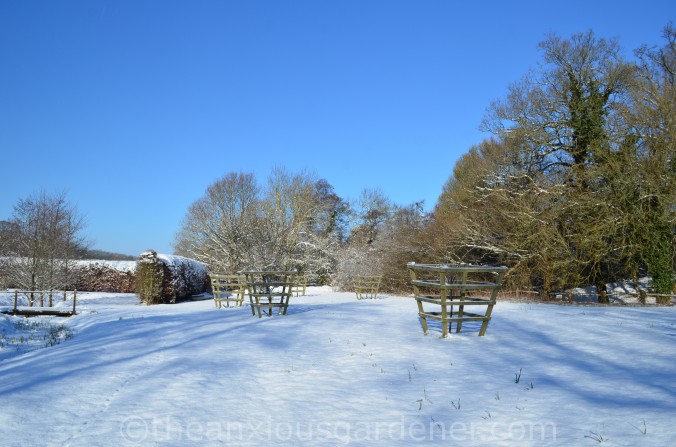 Across the meadow now, with a few sorry-looking daffodils poking through into the sunlight.

I crossed the second footbridge in the footsteps of a couple of foxes who hadn’t bothered to skirt the vegetable beds.  Lazy foxes, like the wind.  No matter, garlic and onions have yet to emerge. 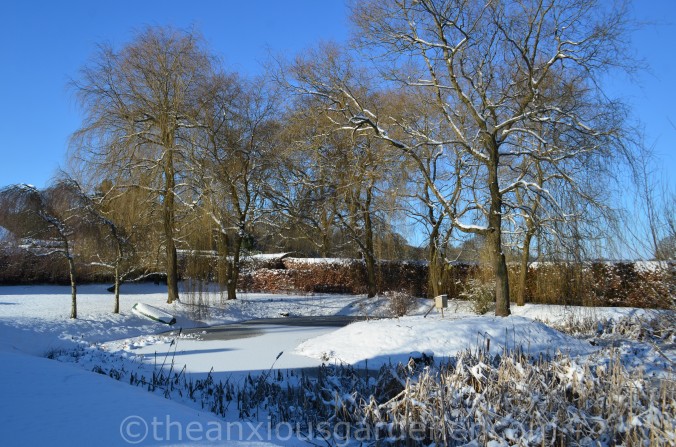 And so to the west pond with Despondent upended on the bank.  She’s lain there since a house-guest recently paddled out for an adventure.  He was underwhelmed by the experience, I think, and even more so after needing a hand from a forelock-tugging-gardener to regain the shore.

February Gold narcissi have let me down again.  Were they renamed March Gold, I need never be disappointed.  But here February Gold always flower in March.  Or rather, once – once! – in nine years have they done what they promise and started their show in the very last days of the second month.  March Gold would be a truer name or Very Occasionally But Let’s Be Honest Hardly Ever Really February Gold.

I’ve pruned the apple trees already, so that happy task is done for another year – but it irks me that I missed the little twig top right.  Why is the inconsequential so stupidly annoying?  Or is that the stupid are annoyed by the inconsequential? 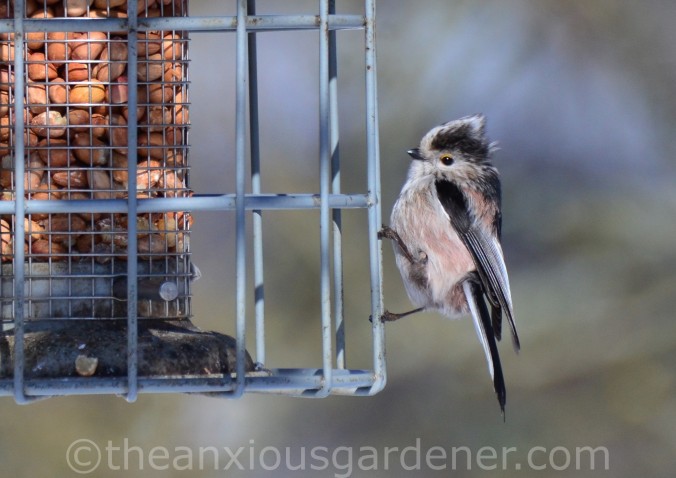 From the trees, I hang five bird-feeders.  I waited for birds to come and feed despite my proximity.  As I could no longer feel my feet, I couldn’t wait long but then one fidgety long-tailed tit did so – before he and his gang bobbed away in that curious, charming, undulating flight. 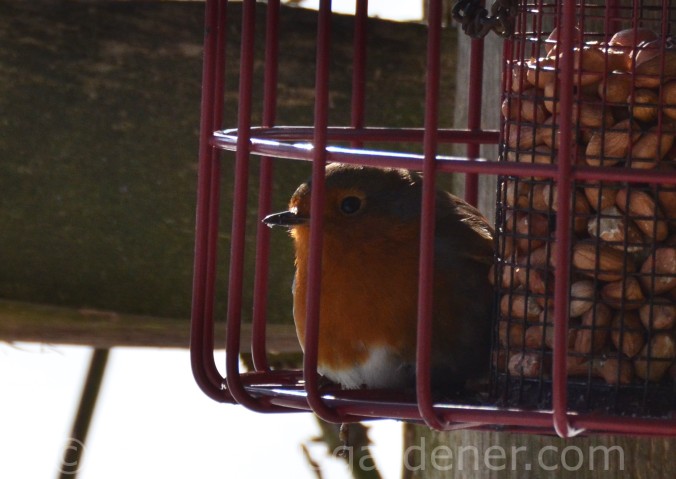 Up by the greenhouse is a sixth feeder.  My caged robin has fattened up handsomely and I really ought to fish him out and stick him under a pie crust.   But he will be sweeter yet after another few days.

Looking back – Margaret’s fenced pond with the greenhouses behind

With little gardening to be done on a day like today, Jim and I set out southwards, uphill to Margaret’s farm.

We passed a small flock of her sheep … whose interest in us evaporated at our obvious deficiency in hay or sheep-nuts.

More sheep watched us hopefully as we approached the yard, on our way to coffee in the Aga-warm kitchen.

But first we loitered by the barn where, snug under cover, stood Margaret’s new ram.  He’s an imposing, fearless chap and I like him enormously.  He’s wearing a raddle – a huge crayon, if you like, that indelibly paints the back of any ewe he has attended to.  He’s probably rather proud of leaving his mark of love on the flock.  The flock, I imagine, less so.

Margaret’s animals almost always bear fine, resolute names.  There were her rams Digby and the mighty Cyril.  Her bulls – Lawyer, Picton, Envoy, Emblem and Wellington.  (I’ll gloss over poor Petal’s name.  Bless him.).  So what do you think the new ram might be called?

As would Thor, Maximus, Horatio or Achilles.

But you’d be wrong.

60 thoughts on “Waiting For Snow”