A few short weeks ago, I was bemoaning the lack of rain at the Priory and how very low the water levels were.  (See “My Pond Leaks …“).   But not any more.

Over the past couple of weeks, we’ve had some seriously heavy downpours here in East Sussex.  The west pond (with it’s leak) was particularly badly affected by the lack of rain.  It’s now brimming and it won’t be long before I begin the annual will-the-house-flood-worry.
Ditches that have been bone dry since the spring, are once again funnelling water through the grounds and into the ponds.

The main ditch, which connects the two ponds, is also full. 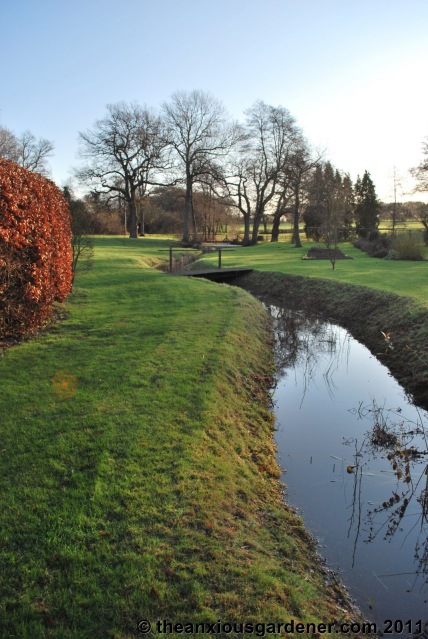 Lovely; I like it full.  It generally remains so for the winter, affording the gardens a moat-like feature which is handy for deterring invaders and marauders.

Strong winds have swept the accursed duckweed from most of the east pond (gifting me the deep, enthralling reflections I’ve missed so much – and doubling the number of trees at a stroke)

and forced it into the pond’s north-eastern tip.

The NE corner of the east pond with the slippy-slidey bridge. Cross with great caution as it's terribly slippy. And slidey.

Here in this tucked away backwater, is a rich habitat of reed mace and water forget-me-not, kingcup, carex, alder and willow.  And duckweed.  Lots and lots of duckweed – whisked here by strong southerly winds.

Though the reed mace has been laid low by frost and battered by wind and rain, it seems to spring back to life in bright sunlight. 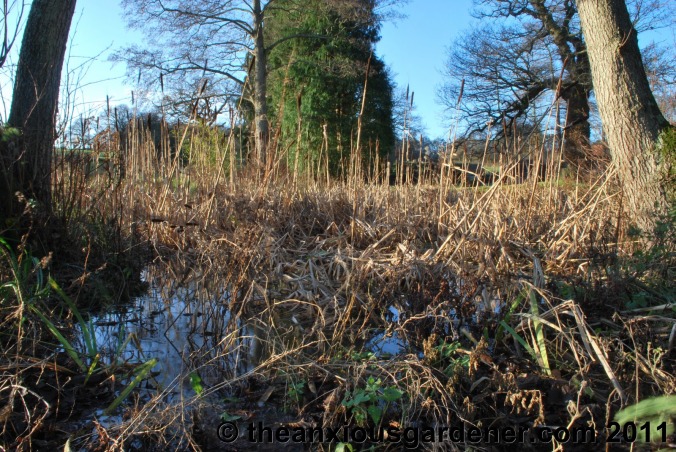 Often, when I walk past this area (across the slippy-slidey bridge), my heart leaps into my throat as, without warning, a pair of unseen mallard explode off the water and up into the chilly, bright air.  They catch me out every time.  I suspect they do it on purpose and chortle to themselves as my hand clutches at my chest, I gasp for breath and a spasm of undiluted alarm ripples across my face.
In early 2009, Reg (his real name) and his almighty digger scooped out huge amounts of mud and silt from this shallow part of the east pond.  It needed doing but it did look terribly ravaged and barren afterwards.

I’m pleased that it is now an overgrown and ungardened corner once again.

But I can’t be doing with those mallard and their practical jokes.  For one thing my heart won’t stand for it.  For another, I’ll lose my footing one of these days on the slippy-slidey bridge and break my neck.  A brace of roast duck for Christmas dinner, do you think?

18 thoughts on “A Watery World”