In between mowing and planting and fretting, I’ve been cracking on with the tropical border and the two completely new beds (see – ‘Busy, Busy, Busy’).  I finally finished cutting the turf (on either side of the path) for the two new beds;  rock hard soil didn’t make this task any easier and yep, I’ve hurt my back.

Looking a little like an oil-tanker, it needs more work as I’m not happy with the shape – it needs to be ‘curvier’.  (Incidentally,  these beds don’t extend all the way along the path, as this is the only access to the east lawn for the ride-on mower and quad bike).

With the new beds cut, the next job was to transfer two or three inches of top soil from the tropical border to the new beds and begin preparing the former.

The new tropical border is close-by the path.

I've been asked to leave the roses in situ - though if all goes to plan they will find themselves smothered by the new tenants. And also, looking at this photo, I'm thinking, "We're going to need a bigger bed!" It needs to be deeper.

And then?  Digging it all over – before it gets a final compost-mulch top-coat.  Thankfully, I still have loads of compost available.

With the hard work mostly done, I thought I had better make a start on getting some plants ready to go into this new tropical/exotic (call it what you will) border. 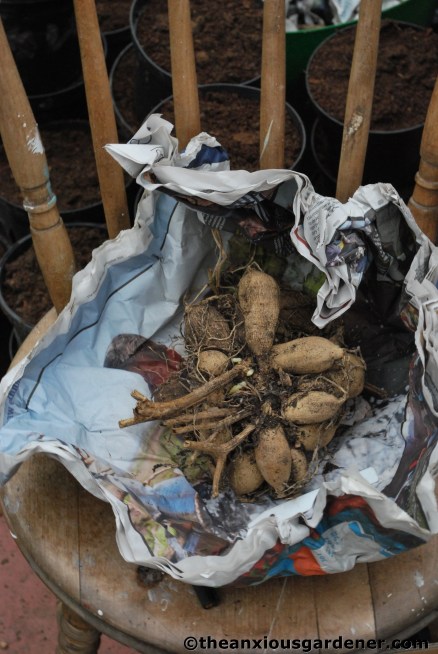 First up, were various dahlias that I dug up last autumn; dried, wrapped up in newspaper and squirrelled away.  I checked them twice during the winter (to remove any rot) and, on unwrapping the other day, found that they were in fine fettle and raring to go.

I also had my box of Precious Things; an order from Peter Nyssen and various other bits and bobs that I’ve picked up recently.

I’m particularly excited about these ten Lilium pardalinum which, with luck and a fair wind, should reach two metres in height.

Great to re-use some of the large number of old pots hanging about the place.

Quite a lot of time spent potting then and er, I might have overdone it on ‘Bishop of Llandaff’ dahlias.  I’m a bit embarrassed at how many I’ve got (though I can use them in other parts of the garden too).  I’ll say the number quickly and then we’ll move right on, OK?  OK.  Ready?  Here we go … 29.

I recently bought these rather lovely Melianthus major.  Not a plant I’ve grown before but I’ve been itching to get my sticky mitts on one (or two) for a while.

To augment dahlias, cannas and lilies, is my over-wintering collection of Echium pininana – grown from seed last year.  I lost one over the winter but these seven seem healthy enough and have continued to grow these past few months.  Indeed, every time I’ve moved them, I’ve had to prise their pots from the soil below.  In the above photo there is also red banana and a variegated ginger.  In addition to all these, I have some ‘Musa basjoo’ hardy bananas and … 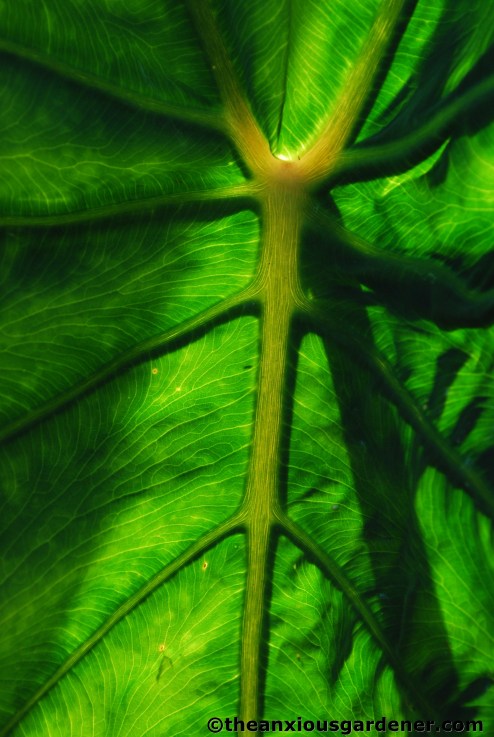 … a colocasia.  I know the latter should probably have had a rest period over the winter but last September I dug it up, popped it in a large pot of leaf mould and put it in the (heated) greenhouse.  It’s a little tatty (hence the close up shot!) but it can go back out soon with a head-start.

A lot of plants then but this is a big new border – and the old tropical bed needs plants too.  I’ll let you know how it all turns out … unless, of course, it is an unmitigated disaster, in which case you will hear nothing more.  Zilch.  Nada.  Nowt.  Instead, I’ll concentrate happily on daisies in the lawn, dandelion seed-heads, frogs and back-lit oak leaves; the usual AG fare.  But my silence will speak volumes and you’ll know, you will know, that the new tropical border looks absolutely rubbish.

38 thoughts on “Planning for the Tropical Border”