has been either rain-sodden or bitterly cold down at the Priory.

I much prefer the latter.

The west pond has been frozen but Solo … 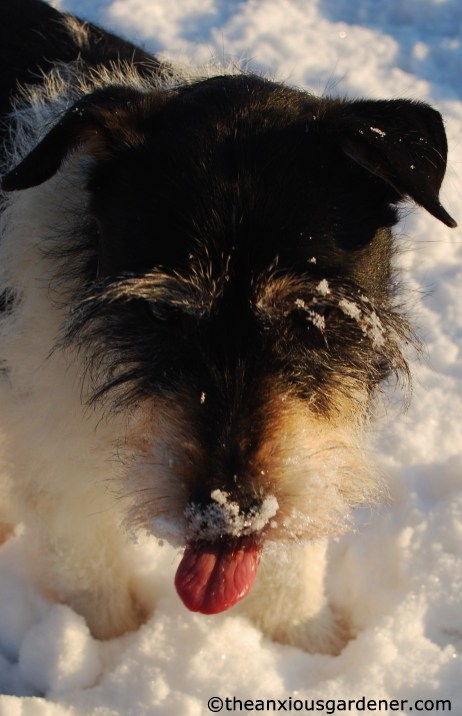 … no longer ventures out onto it.  A couple of years ago (when this photo was taken) she ran across the ice (chasing a snowball), broke through and had to be ignominiously rescued.  She wasn’t happy.  So no, Solo doesn’t do ice.

This shallow arm of the east pond has been frozen too.  I love this unkempt area of willow, water and alder.  Grasssnakes live here (though deep underground now), heron visit and moorhen hide amongst the battered reed mace – not very well; they always break cover long before I’m aware of them.

There are nine old apple trees at the Priory but they have all been abused over the years with, for example, limbs removed leaving horizontal cuts which allow water to pool and the trunk to rot.  They’ve fought back with a forest of shoots and it these I mostly remove or prune back each year – as well as any crossing or damaged branches.  I remove canker too with which the poor things are riddled.

Sometimes, I’m so very cold (usually when I’ve forgotten an extra pair of socks) that I just gaze into the house and wish I could go inside and play with the boys.

Thankfully (with a heater and the morning sun) the greenhouse is warm.

Perhaps a little too warm.  My echiums, uprooted from the outside glum, have responded with vigorous new growth.  I do wish they’d stop it for goodness sake – one has almost reached the roof.

Sadly there wasn’t enough room for all of them.  This one stayed put –  RIP.

Rob the Brickie (not his real name) does a lot of work at the Priory during the winter.  I call him Rob the Brickie though brick paving is but one of his many talents.   For instance, he loves digging … 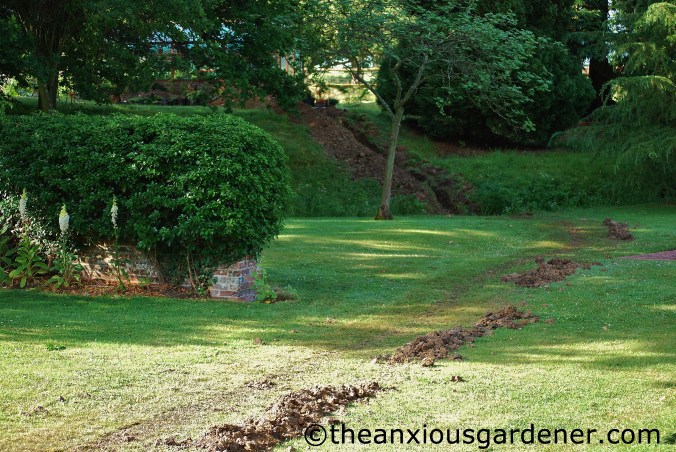 … trenches.  Yep, really.  Ditches for drainage, ditches for power cables or, as above, a ditch for the water pipe up to the greenhouse (June 2011).  Dug, piped and refilled in under two days.  And unlike some of the other ground work at the Priory, Rob’s trenches don’t slump afterwards.

You might remember that cows broke into the gardens a while back (see ‘Cows In The Asparagus’).  Bless them – how I chuckled at their antics.  In their unbridled lust to gain access to a place long-denied them, they knocked down a couple of stretches of post and rail fencing.

The cows are now indoors for the winter …

… but the sheep aren’t.  So Rob is replacing the sixty yard length of old, damaged two-rail fence with a stouter, higher three-rail one.

This is one of two stretches of twenty-year old fence that will be replaced in the next few months.

Oh and I’m about to lose my terrifically useful holding bed.  I use it for heeling in new trees, shrubs or roses and for holding herbaceous ‘stuff’ – until I have space for them in the borders.   Like I say, terrifically useful.  I shall have to build a replacement.  And I’ll also be losing the asparagus bed which is sad but, you see, they both have to go; we’re getting another greenhouse.  It will be the same size and design as the existing one and will sit right behind it.

It’s been ordered and will go up in the next couple of months.  Rob will lay the pavers and build the base wall.  Useful chap to know, Rob.

And then I will have to think long and hard on which greenhouse to drink my tea in.  Tricky.

As I won’t be posting again this month, I’ll take this opportunity to wish you all a Very Merry …

… and a Very Restful Christmas.