My summer kicks off with the release of Margaret’s cows from the sheds.  I was on holiday on the big day, and for the first time in several years, I missed all the pent-up excitement, the expectation, the arging and barging, the galloping, the frenetic leaping into the air and bellows resounding across the valley.  And that was just Margaret – though the cows were pretty happy too. 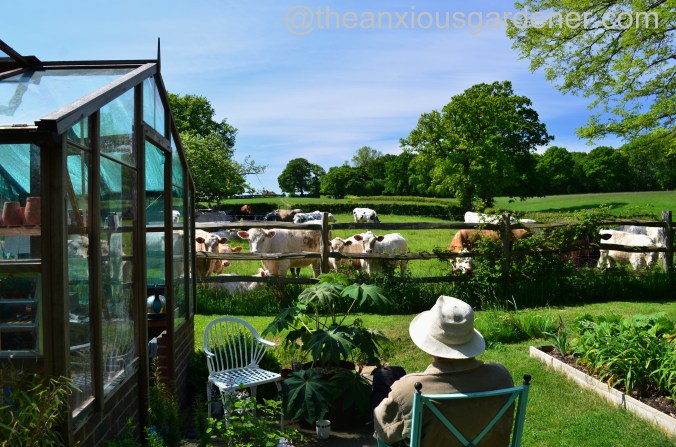 Now that the cattle are out to summer pasture they often wander over to check whether the grass truly is greener. 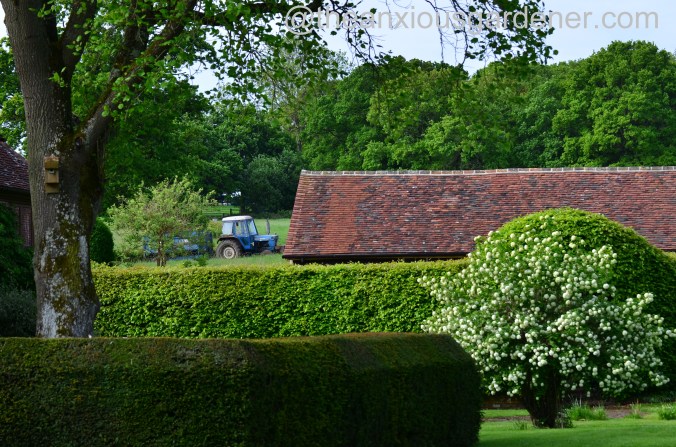 A farm-hand (or one of her ‘boys’ as Margaret calls them – though one is over eighty) spent several days chugging past the Priory, carting manure to an outlying field.  The Priory seemed absurdly busy with the tractor coming and going with a loud, steady thrum, thrum, thrum (that’s the noise of a tractor engine, btw).

The big Viburnum opulus ‘Roseum’ put on a huge amount of flower this spring.  After consulting a gardening chum, I didn’t prune it back last year.  I know I probably should have; I know that those long branches bend and might snap under all that weight.

But I don’t care. 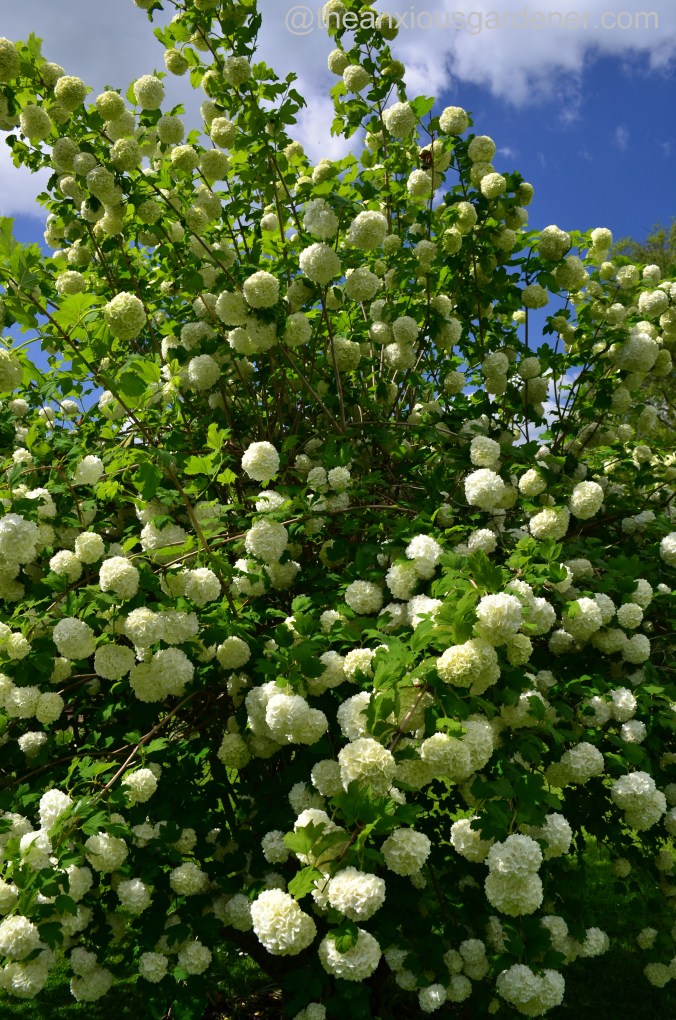 The sheer number of flower-heads from those tall, overly long stems was worth the risk. 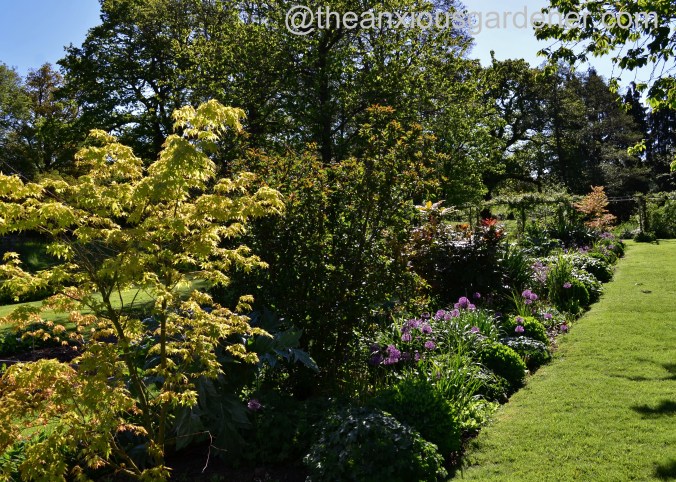 In the long borders, alliums set the ball rolling with a promise of things to come.

At least, I hope there are still things to come.  I’ve re-jigged and replanted these beds during the past few months – perhaps they are now at their peak and this is their best? 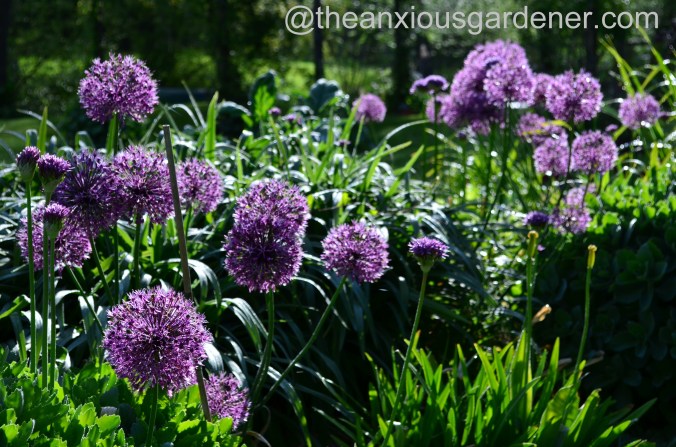 Oh, dear there’s a thought.  Just as well I like alliums.

The big wisteria has finished flowering now but here it is a couple of weeks ago.  There was more bloom than I was expecting given the cruelly harsh winds that shredded the flower buds.  But then a late frost often robs us of any flower at all.  Longer racemes would look better I think but as you know I’m not one to moan.

Beyond the wisteria arbour is what I call the Rock Border (because it has rocks in it) with the second of our two V. opulus ‘Roseum.’  (The ugly bare conifer trunks mark where we lost a tree last year). 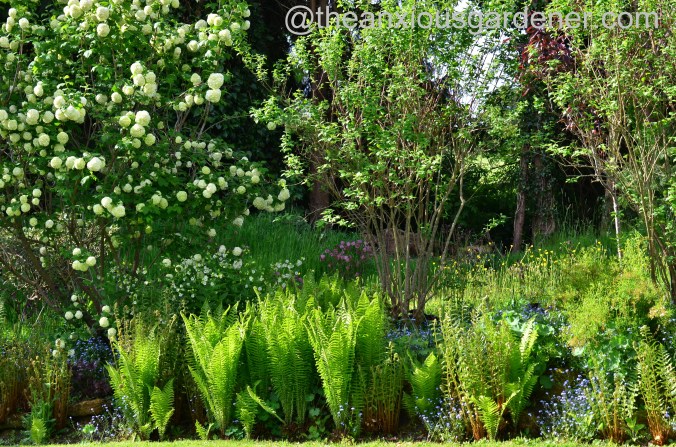 This is a spring border and was a mound of bramble, ash, bindweed and nettle when I first saw it in 2008.  I’ve cleared all that stuff but still join fierce battle with ground elder – a battle I’ll be fighting until the day I leave, I fear. 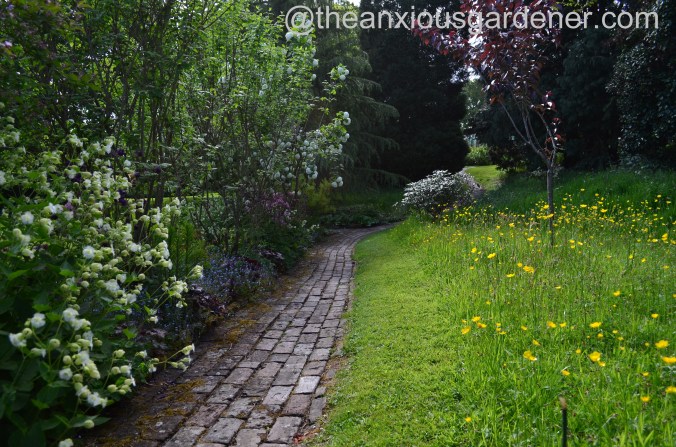 On the far side of the border, a path leads up to the greenhouses beside a small lawn left uncut until daffodil leaf dies down.

A bumper crop of buttercups is a pleasant bonus.

Silene fimbriata repeats several times throughout the Rock Border (from one small clump added in 2009).

There are alliums here too 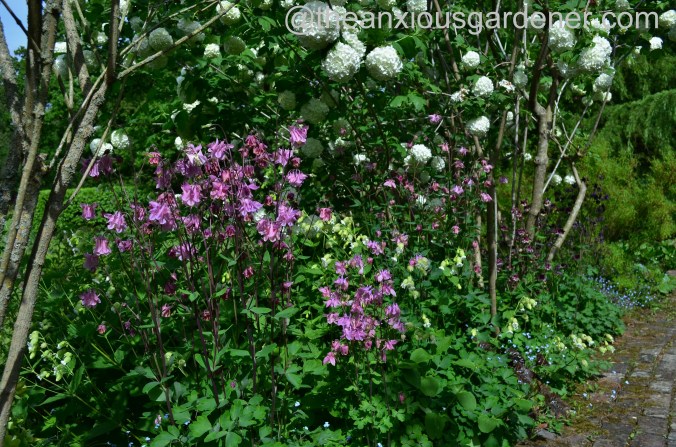 I prefer the darker colours and promise to pull up the pinks every year but – curiously – I never do.  Perhaps, deep inside I’m a pink lover after all.  Fancy. 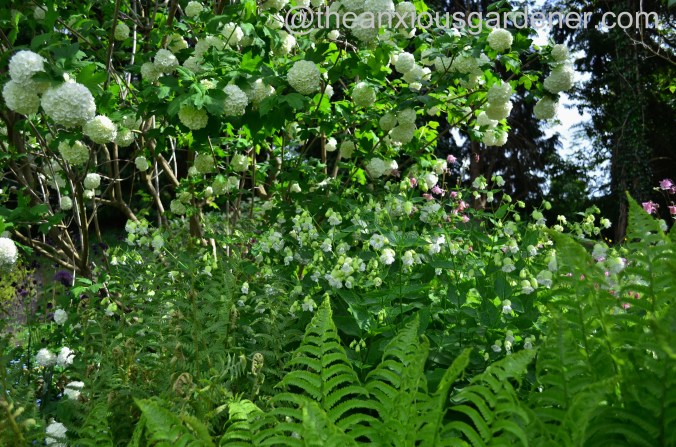 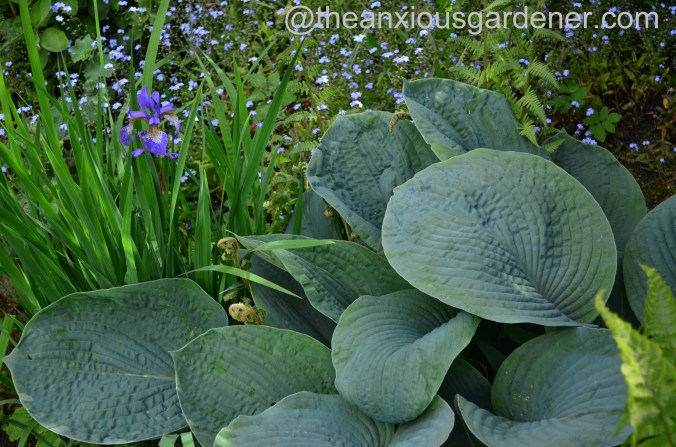 for which I’m grateful. 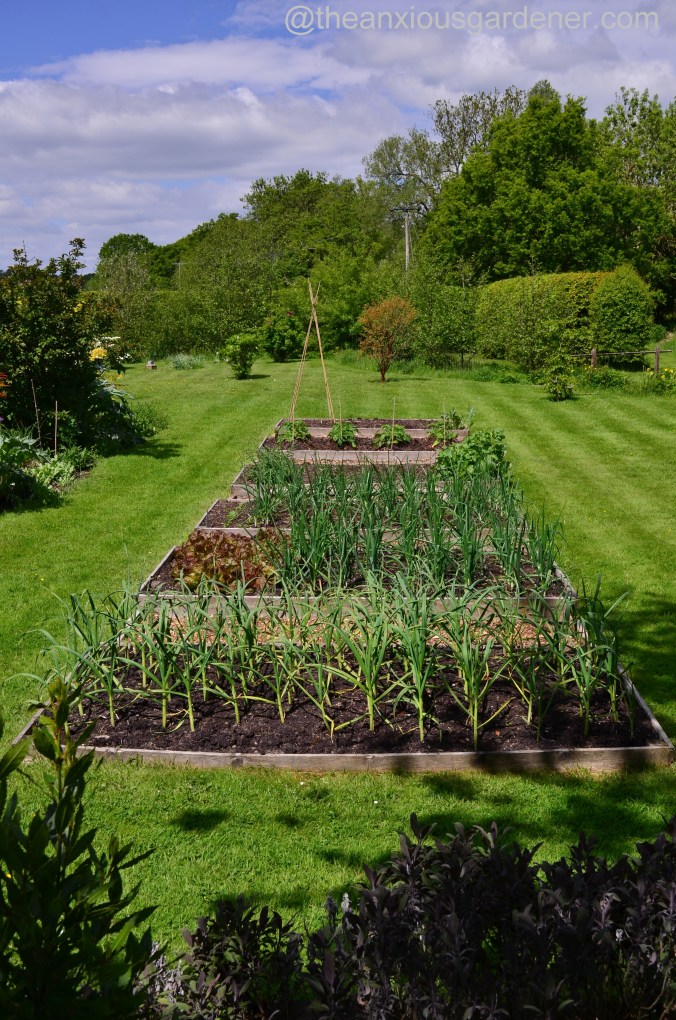 And our mollusc pals didn’t bother my veg either this year.  I don’t grow an exciting range of vegetables: onions, garlic, a few potatoes, beans, courgettes, salad leaves, radishes.  That’s more than enough for us simple Sussex folk.

Do I post a photo of the honeysuckles every year?  Probably … but they are rather lovely, nestling up against the house, with a heavy, sweet perfume and the constant drone of droning insects.  This one faces south 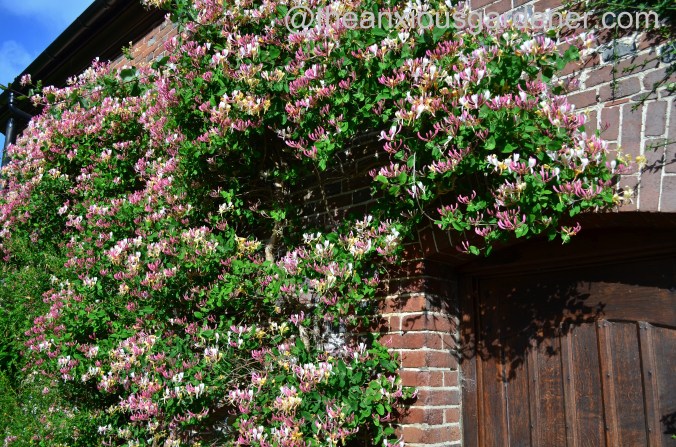 and a larger one, west.  The latter was a top-heavy, bare stemmed, leggy beast when I started.  I have since cut its top back hard.

Over several years, it has returned with renewed vigour and now fills the wall.  I’ve never fed either of them.  Maybe I should? 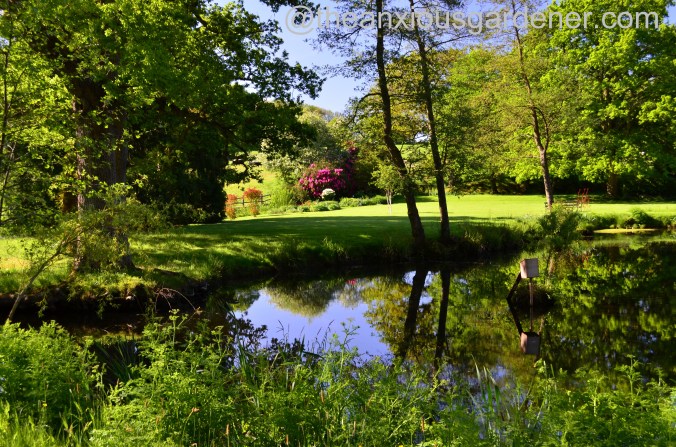 So there you have it – the Priory over the past two or three weeks.  In addition: my newly built duck-boxes have produced no ducklings; the west pond is, for the first time, hosting a revolting green algae (and a dead crow); I’d like more rain; the amount of work is simply overwhelming; it’s sometimes been too hot for mowing; often too cold for growing (if not for weeds – they grow far faster than must be botanically possible);

those cows are forever staring at me for no good reason; and pheasant nibble my clematis.  (No.  That’s not a euphemism). 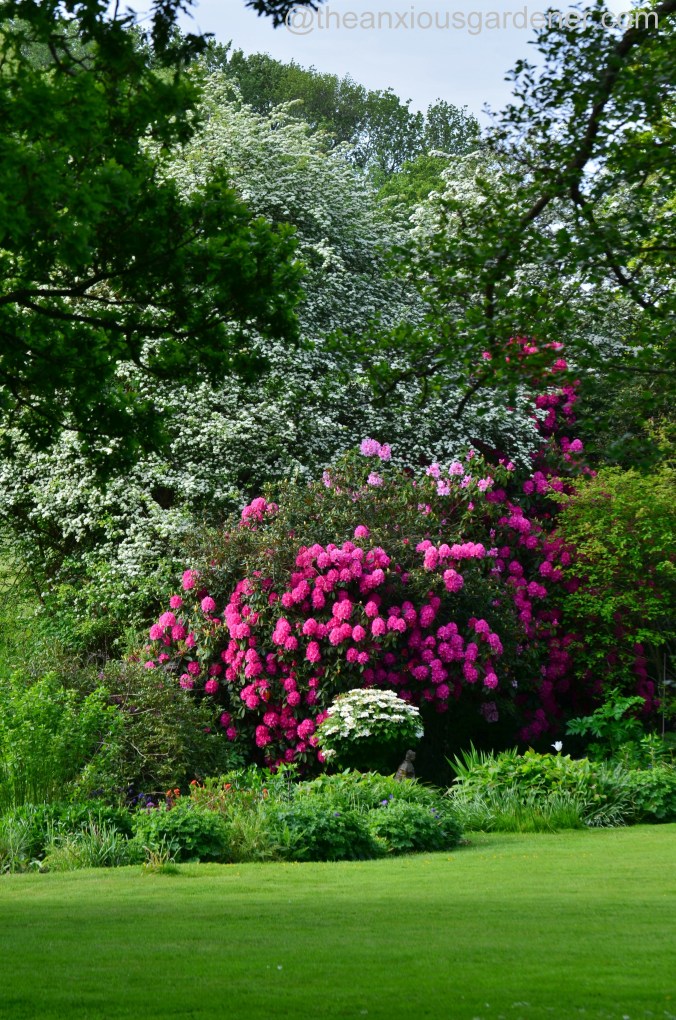 But I wouldn’t want to work anywhere else.

49 thoughts on “The Garden in Flower”