Like last year, I gambled on a fine spring by planting up the tropical border early.

In mid-April, to a comb-and-tissue-paper fanfare, I dug up the big red banana (Ensete maurelii) from its winter-greenhouse-home and wheeled it into position. 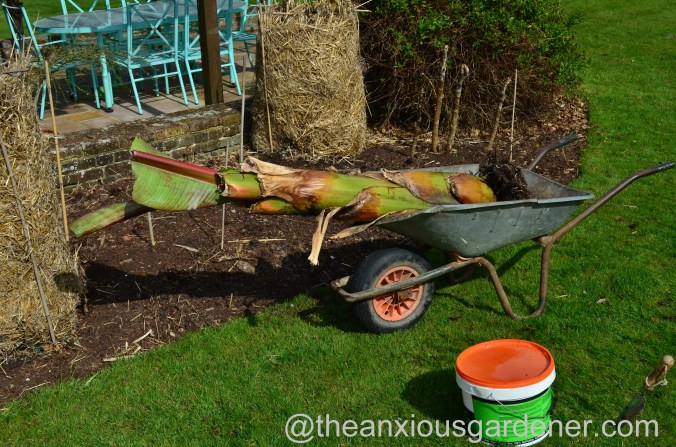 And then I did the same for the ‘small’ one. 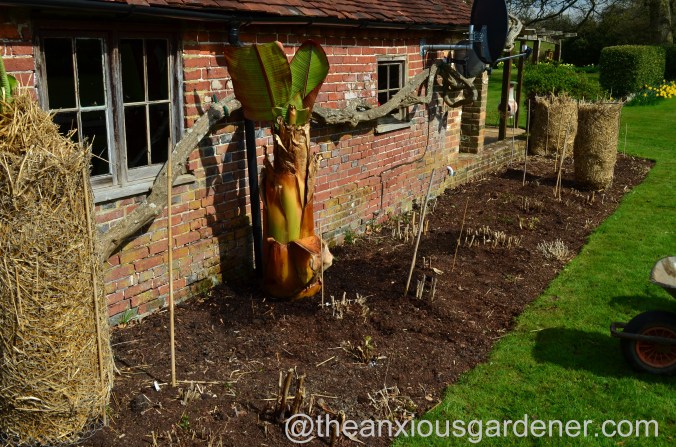 Each year I add a deep leaf-mould and compost mulch; as well as a generous scattering of pelleted chicken manure.  Beneath the mulch and marked by canes are over-wintering dahlias, cannas and what-nots.  I mark their position so that I don’t slice through a big, fat dahlia tuber whilst planting a banana.

Within a day or two of planting, temperatures took a dive and I gave the red bananas a little protection. 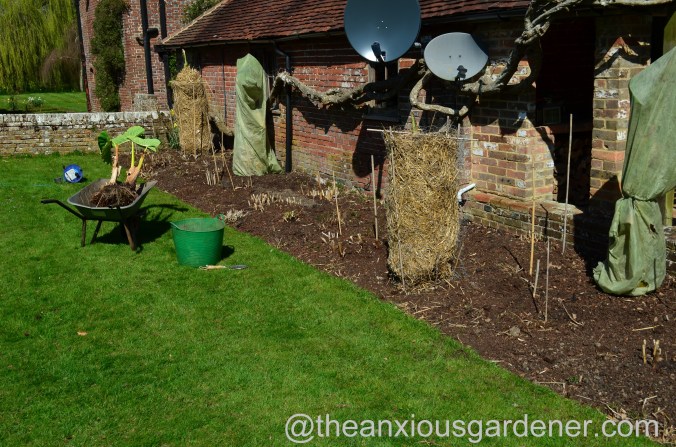 Pretty, huh?  Next out, were my three colocasias and various other bits and bobs.  But in retrospect I should have left all these non-hardy perennials in the greenhouse for another month.  April and May 2015 were bitter at times; and all of these plants suffered from that harsh, grim spring.  But if leaves shrivelled and blackened, plants shrank and glared, they all survived.  No thanks to me.  Last year an early planting paid off; this year it didn’t.  I’ll eat patience pie next year and plant them out in May.  Probably. 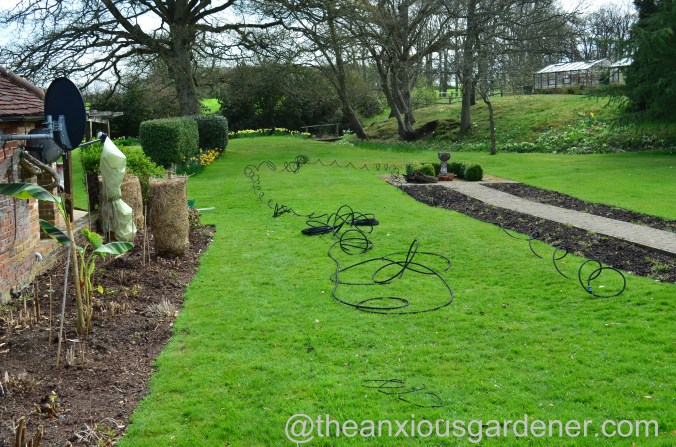 Over the past four years, I have spent a large chunk of my time on Earth watering the tropical border.  To make life a little less drudge, I decided to lay soaker hose throughout the bed.

Have you ever used soaker hose?  I hadn’t.  Good grief but how I hate soaker hose.  (Hate isn’t strong enough a word).  There’s probably a knack to laying it: a very simple, straightforward, commonsense knack.  But if so, it fluttered above my head just out of reach, chortling.  As per the instructions I laid it out under hot sun to make it warm and pliable.

Contrary to the instructions, that made no difference … whatsoever.  It kinked and twisted and – as only an inanimate, unreasonable, spiteful thing can do – made me apoplectic with sweary rage.

Drawing on a superhuman patience I didn’t know I possessed, I slowly wrapped the untameable, kinky coils around plants and pegged it into place; un-kinking as I went.  (I should have buried the blasted thing but there were too many established plants here to dig trenches).

Eventually, to my great surprise, the horrible job was done and to my greater surprise still, it worked. 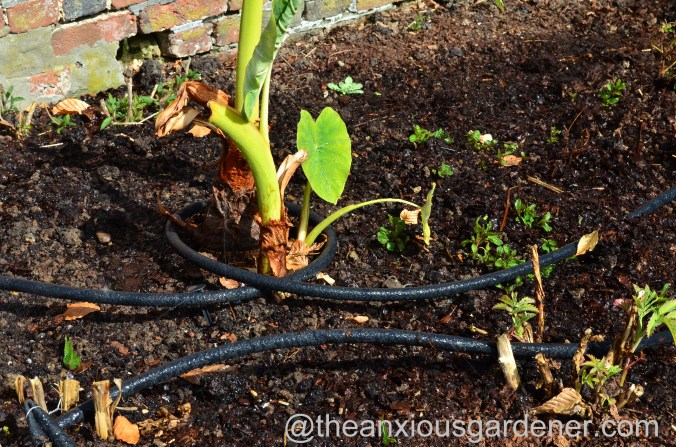 Later, I smothered the hateful hose pipe under barrow-loads of compost to hide it from view … and memory.   And to reduce evaporation.

I connected the hose to a timer and for an hour every summer morning, water is pumped up from an adjacent well to soak these thirsty big boys.

and so I released them.  Last year, growth started almost immediately and the border quickly plumped up.  But not this year:  April, May and even June passed by in a blur of inactivity. 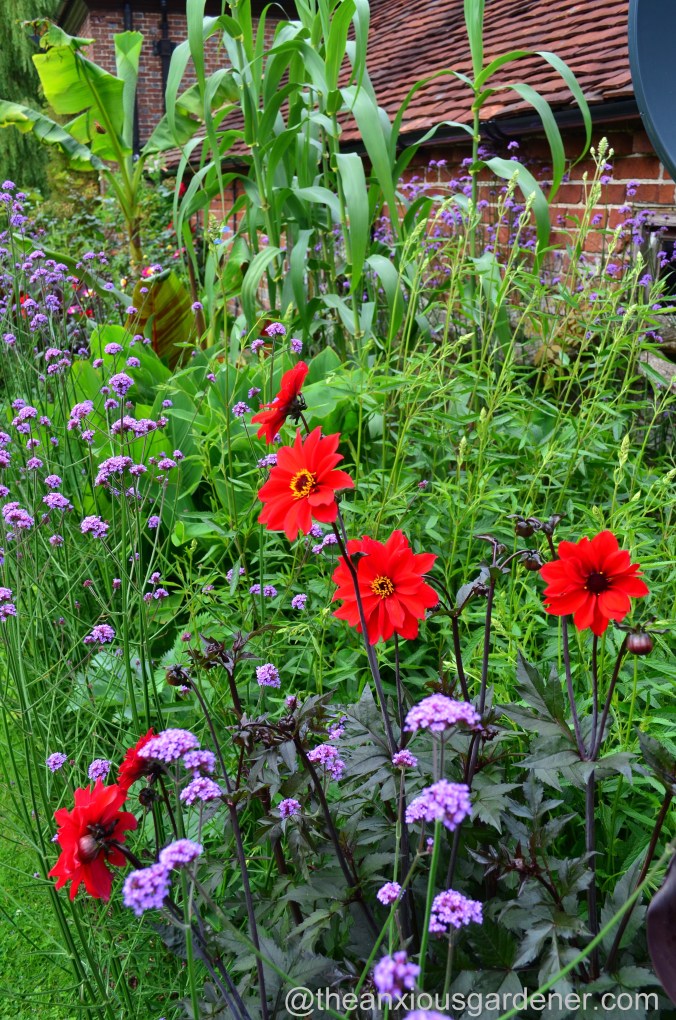 It is only in July that the plants have fully woken

and the border has come to life. 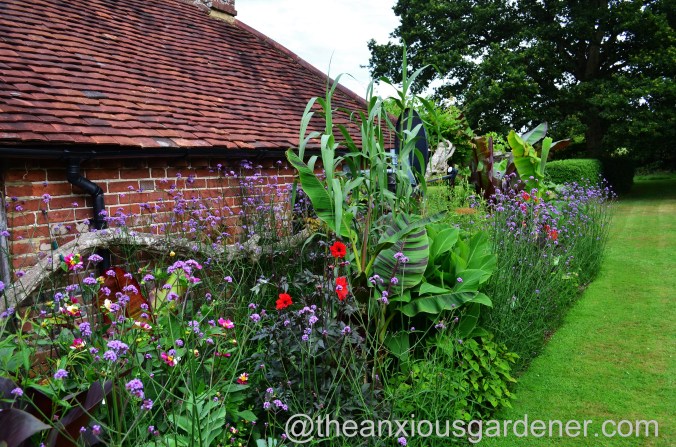 It is still early in my ‘tropical’ season and some plants aren’t half their eventual height and width.

Or at least I hope they’re not.  I’ll show you the border’s progress in a few weeks time and detail the plants I’ve used; those I’ve moved; those I’ve added and those I’ve removed.  And we can hope by then, if nothing else, that those beastly satellite dishes will be lost from view.   Along with the damnable soaker hose.