(I’ve written about cutting the two meadows before but as it is such a big part of my working life at this time of year you might forgive me for revisiting the subject).

Cutting the Priory meadow is a job that looms large from late-summer onwards.  Cut it too soon and I lose late flowers and attractive long grass; cut it too late and I risk autumn rain turning the ground to mush; and too sodden for mighty machinery. 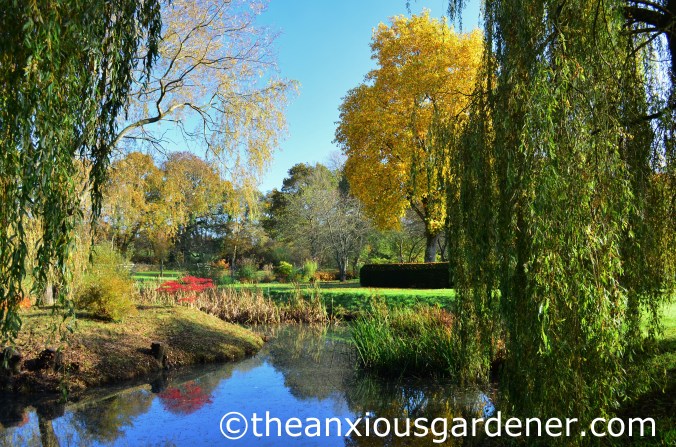 We’ve had a glorious few weeks here in Sussex (and as I type we still haven’t had a frost) but after anxious nail-biting, I finally blinked and phoned my mowing man, Sam, a couple of weeks ago.

I’ve featured Sam’s amazing apparatus before but I haven’t actually seen him for three years.  Like a mowing pixie he has swooped down on the meadow over a weekend, trundled around and been long gone by the time I return on Monday morning.

Having twice cut the meadow myself (which is a hell of a job – if better than the raking), I watch Sam going about his business with enormous satisfaction.  And relief.

What would take me several days, Sam does in about an hour. 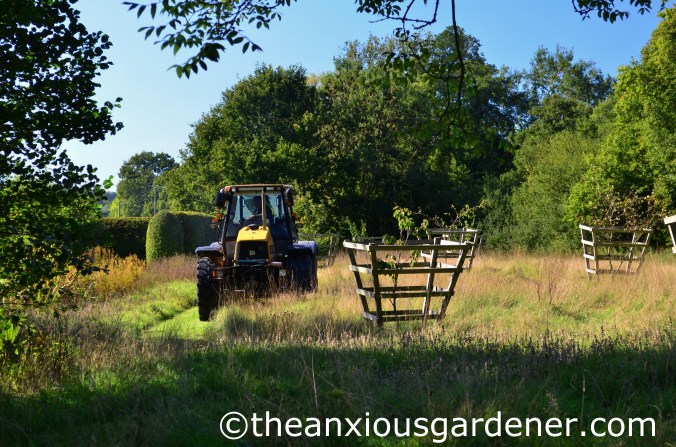 and, of course, various large trees.  Having collected all the mowings in that drum, Sam dumps it all at one end of the meadow where it will rot down over the winter.  Not an ideal solution but the easiest, cheapest I’ve come up with.

Withdrawing to the north lawn, I watched contentedly as he passed back and forth before, waving goodbye, I left him to it and drove home for my tea. 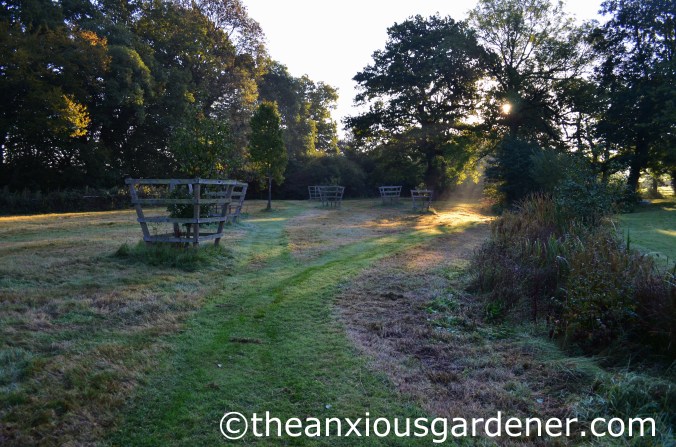 The following morning the meadow was stripped bare.  But the job wasn’t quite done.  I spent about a day tidying up: strimming all the bits Sam couldn’t reach and cutting the grass shorter still with The Priory ride-on. 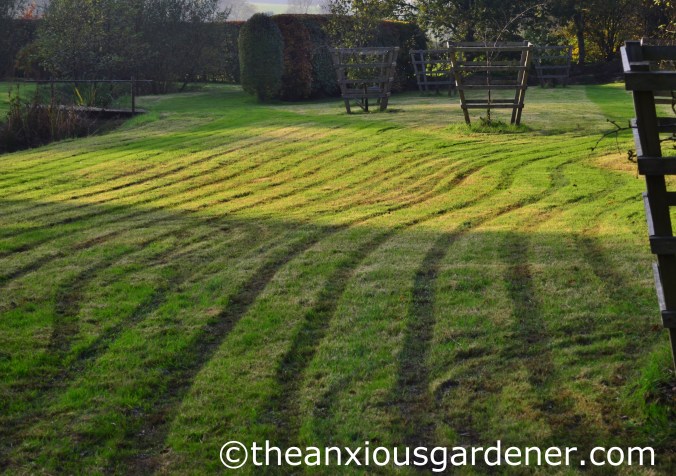 Since when I’ve cut it once more and will continue doing so until either the grass stops growing or the ground is too boggy.  You can see how wet it is already … but those muddy tracks make good strips for sowing flower seed.

Meanwhile, several miles away at The Old Forge – ‘my’ other garden – I’m faced with a similar task.  Here the area of uncut rough grass is huge; the ground far less even. 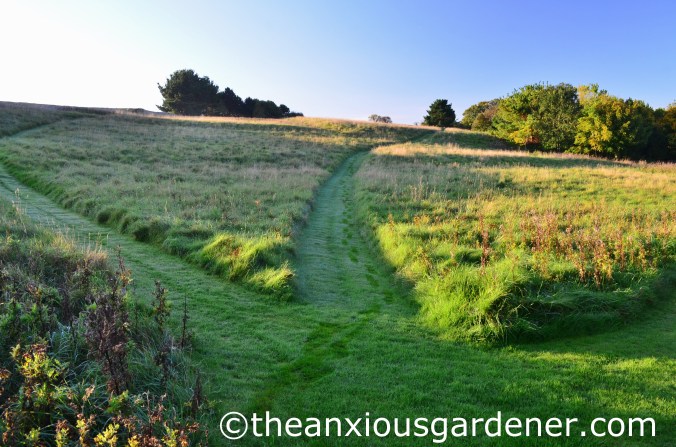 And so, I cut it myself.  It is a full day’s job but an annual chore I rather like.

Especially on a beautiful October morning.

I hire a remarkable machine called an Etesia Attila.  I’m not too bothered with machines.  I mean, they’re just machines right?  But when one does a job exceedingly well and fairly effortlessly, I happily doff my cap and give it a little pat. 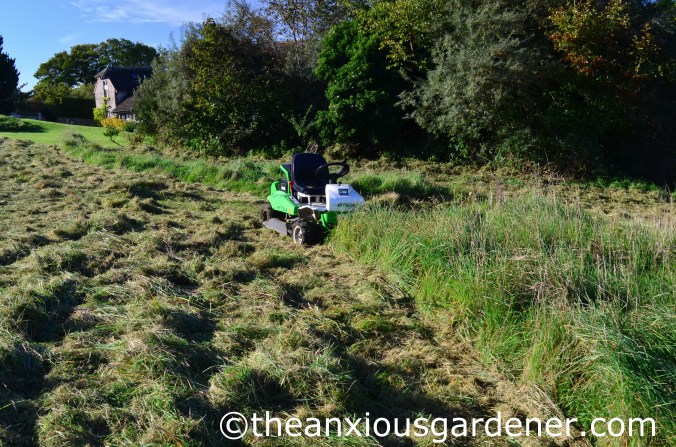 The Attila chuckles at slopes, winks at ditches and guffaws at long tussocky grass.  It occasionally stalls but considering what I ask of it, I don’t get too hissy. 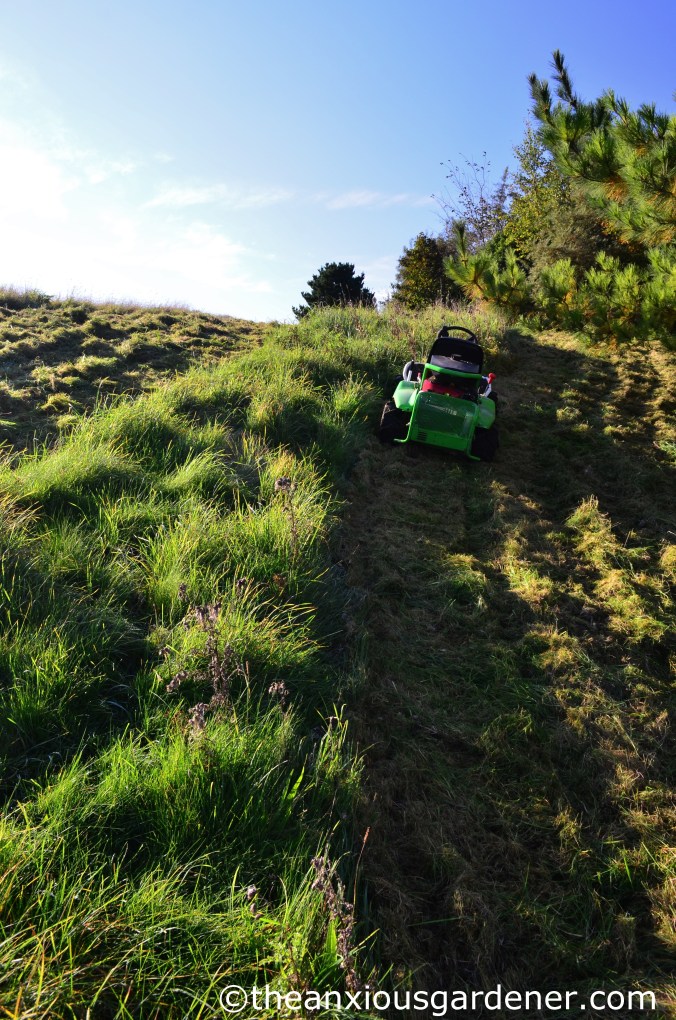 My only true concern when chopping this long, tough grass is avoiding the fleeing field-mice and scuttering voles.  I need to be vigilant to avoid mowing a vole.  Who wants that?

But vole escapees still had to avoid a pair of vigilant crows and a hunting kestrel.  I didn’t have time to fetch my camera that day but here’s a photo from a couple of years ago.  It fed well.  Sorry voles.

This was more of an agricultural day’s work than a gardening one.

I was tired after 8 hours mowing in ever-decreasing circles.  Unlike The Priory, all the grass at The Old Forge is left where it falls (except the mown paths which I have since cleared).   It looks quite unsightly but an annual mow halts a steady encroachment of bramble, blackthorn and dogwood. 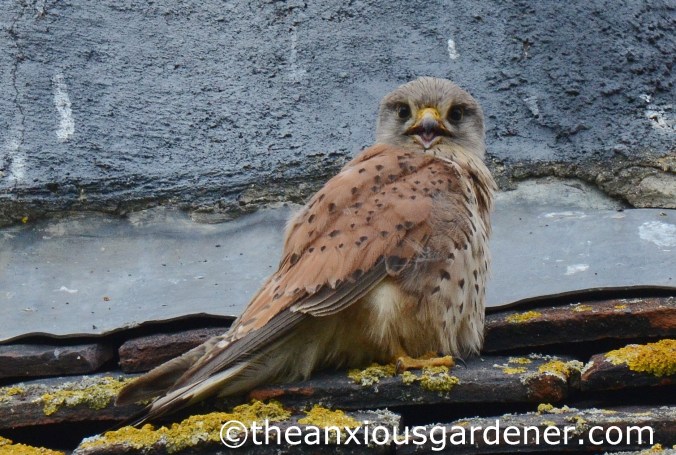 As I said, I don’t mind mowing the long grass at The Old Forge.  It’s time spent listening to top tunes on my MP3 player, smack in the middle of the South Downs National Park and with a hunting kestrel for company.