I’m taking a short break from ‘The Anxious Gardener‘ but meanwhile, and after months of winter drear, it seems a shame not to share some images from the last days of March. 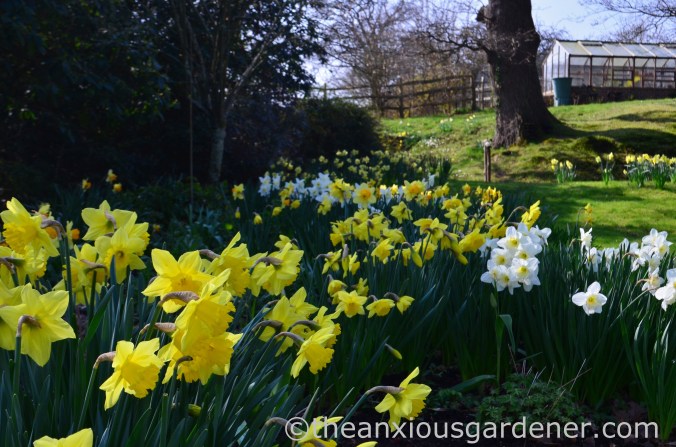 Daffodils aren’t around for long but The Priory’s brief show is hearty.  I’m so used to their regular, faithful appearance that I don’t even bother photographing many of them any more. 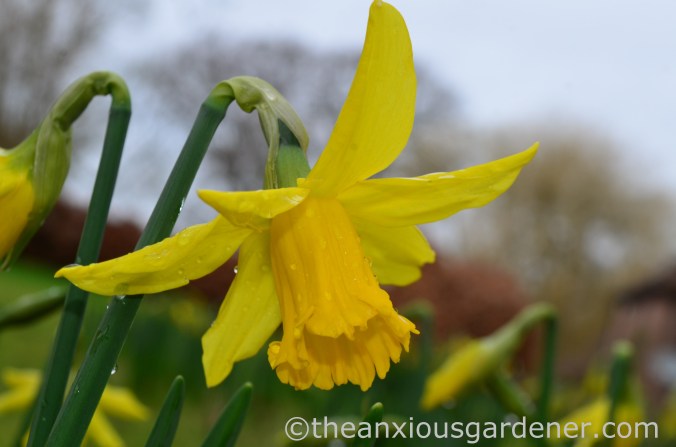 (But I made an exception a month ago for Narcissus ‘February Gold’ – which lived up to its name with about a day to spare).

I’ve written before about the dozen or so varieties I’ve planted since 2008 but many Priory daffs pre-date my arrival and, names unknown, continue to thrive. 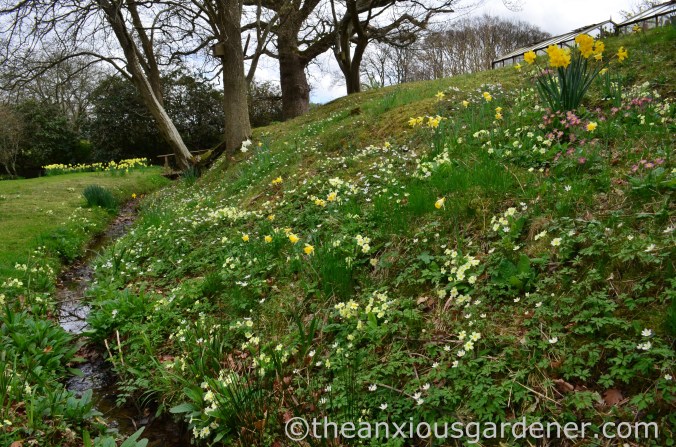 I have an irresistible urge to show the bank below the greenhouses at this time of year. 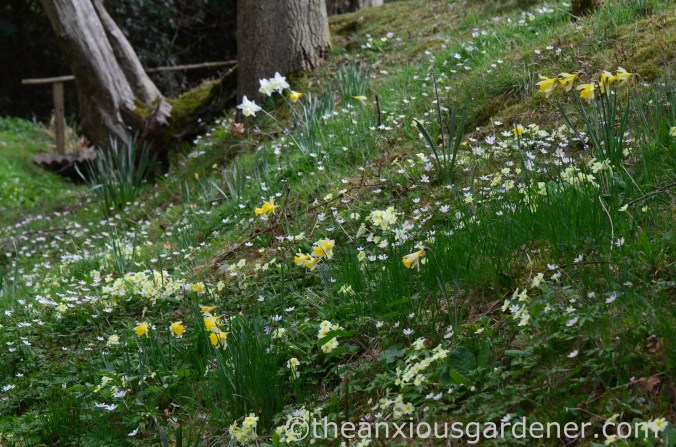 Other than now-over crocuses and snowdrops, I haven’t added anything to this slope.  But unlike the previous gardener, I don’t strim it; at least not until the autumn.  How he strimmed this splendour is beyond me. 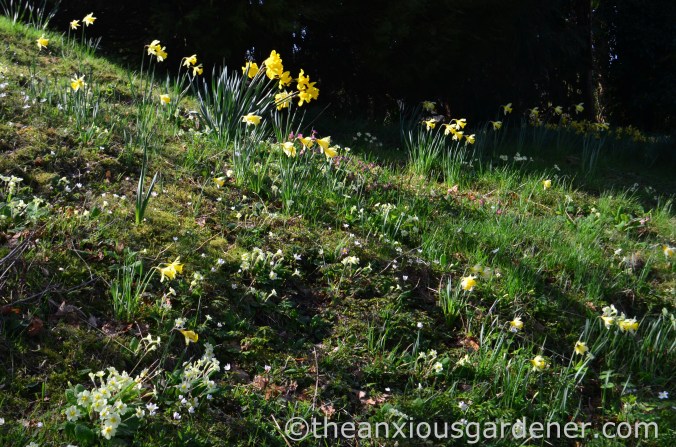 I say every year how I love this bank in springtime and especially so as I do nothing to it … other than that one autumnal strim. 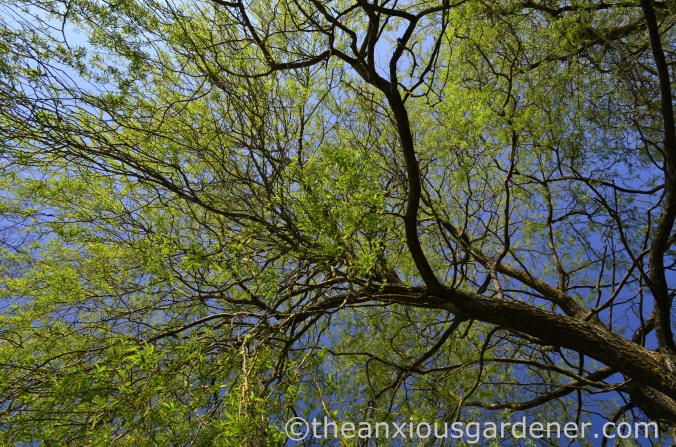 The big weeping willows are coming into leaf and another irresistible urge is to lie down beneath them and, fighting to keep my eyes open, clear my head for a few moments to appreciate scale that most gardens can’t accommodate.

A month or so ago, I cut off all the leaves on my bergenias.  You don’t have to but I don’t like the black-splotchy old leaves and prefer to start the season with a clean slate: fresh green leaves, clearly visible flower stalks.  But do as you like – I shan’t judge.

I’ve only ever known one Magnolia stellata intimately.  The Priory’s is a little tree and only reaches my chest.  It has barely grown taller during the nine years of our intimacy.  In the past, its flowers have been browned by frost but this year they are unblemished.

Other than giving it an ericaceous feed (about now), a winter mulch of leaf-mould and keeping its planting square free of weeds, I leave it be.  I’ve never pruned it. 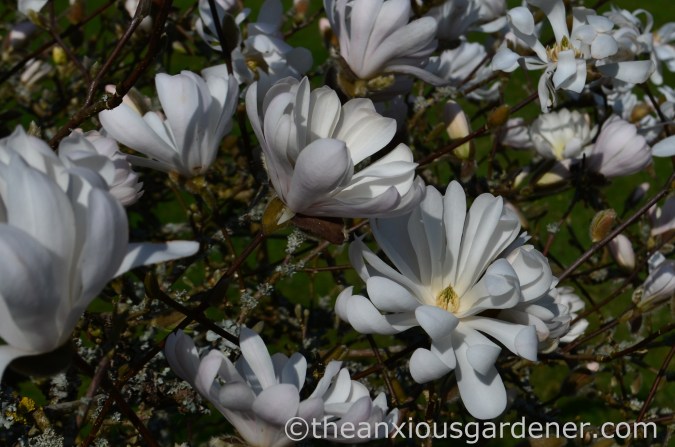 It’s a beauty and when I finally settle into a house for good, with no plans to move, I shall plant one (and hope for lichen too).  And honestly, there aren’t many trees or shrubs I can say that about.

Male pheasants make an awful racket in March.  It is particularly their loud, short, territorial proclamation that makes me jump and sets my teeth on edge.

These two were having a protracted battle for the Bird Feeder Territory.   The scatterings from the feeders make this the must-have territory. 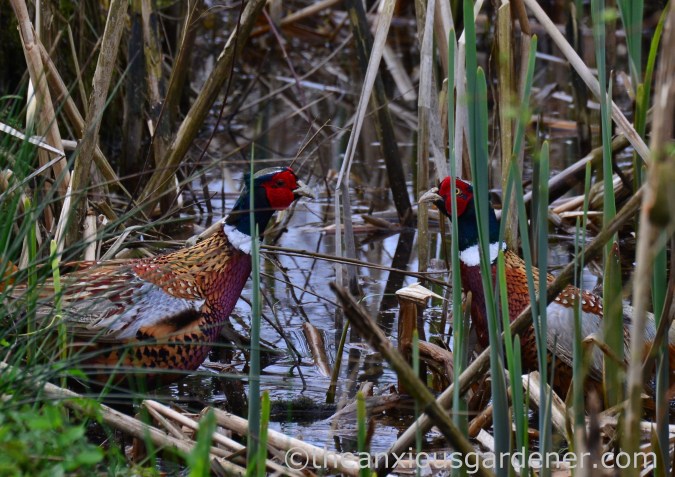 Their sporadic fighting drifted back and forth across the lawn, including a dunk in the pond.

I don’t know who won the war but I suspect whoever did, will end up the fatter of the two. 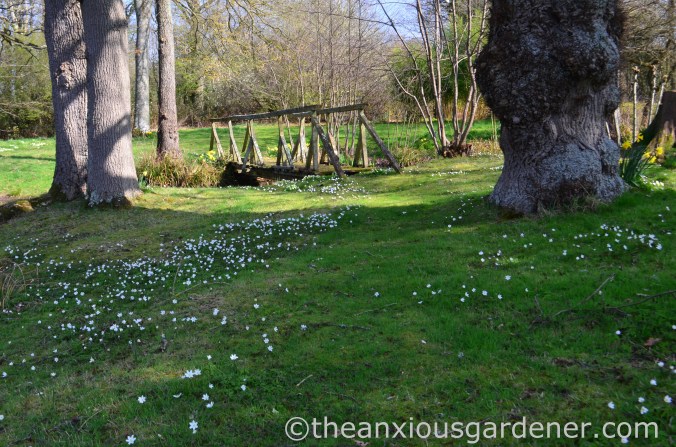 Wood anemones are another rich reward for not mowing and not strimming – though you can see where I cut a path to the bridge when mowing starts again.

Every spring, at least one pair of Canada geese arrive to pooh on the lawns and honk repeatedly.  They honk a lot, Canada geese.  And pooh.

Their arrival is as much a spring marker as any number of daffodils and anemones.

By the greenhouse, one of my few auriculars flowered on Friday.  I love auriculars – as perfect a flower as I could wish for.  And I love how they almost stare back at you, demanding your approval.  An approval I give readily.