I spent yesterday taking the suckers off of alders and willow.  It’s a job that takes up a great deal of time, but I finally tackled the last of this sucker-fest over in the north-east corner of the garden. It’s an  area of the grounds  that is relatively untouched.  The flower meadow ends here where it runs into a tangle of bramble and nettle, teazle and thistle surrounding an old solitary willow.  There is also a wide shallow extension of the east pond that mallard, moorhen and heron frequent.  This is ringed by alder and more willow and, having been dredged two years ago, it is beginning to be colonised by reed mace (known to me in my childhood as bullrush), marsh marigold and greater spearwort.  The latter was introduced by me and I’ve got my beady eye on it.  It is invasive  and I  don’t want it to take over completely.  I suspect though it’ll do what it wants.
This is  arguably the wildest bit of the garden and whilst I wish it to remain a haven for the creatures and plants that thrive here, I’d also like it to look a little less, well, neglected.
We’ve had several alders taken down in the past couple of years (and more were felled during the-years-of-neglect) and each year, where the stumps remain,  a forest of suckers emerge.  In addition  the standing alders also sucker.  Bit of a head scratcher as to what to do about them.  They can look attractive: 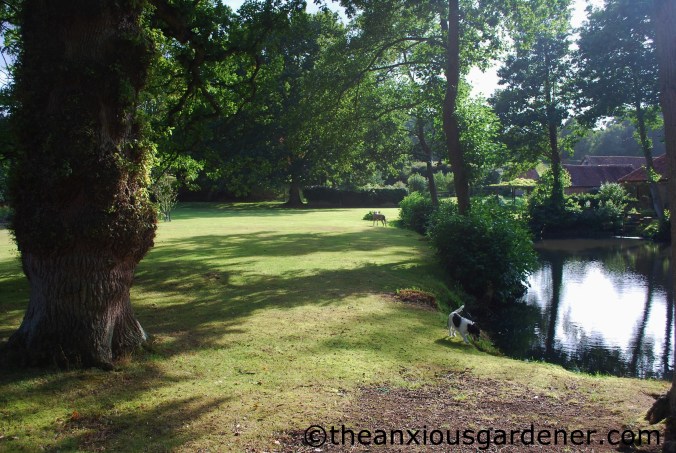 Suckers at the base of the alders on the east pond.  Aug 2009

but I worry about them getting too big and so remove them each year.  There’s approximately 15 alders plus a similar number of  stumps.  In addition there are probably a dozen willow stumps.   So, a lot of suckers.

Quite pleasing to de-sucker an alder;

After.  (I do like a before and after shot.  There’ll be another one along in a moment)

but it’s just another time-consuming job;

though satisfyingly it produces a huge amount of material for a bonfire.
I didn’t want to remove all the suckers in the garden and generally over in this quiet corner, I’ve let them be.  For some time now I’ve wanted to plant a pleached lime or hornbeam avenue at the Priory – hopefully one day I shall.  I’m fascinated by the gnarled and contorted, swollen stems and branches of regularly  pollarded trees.  In winter, when all is empty and forlorn, there is a nascent energy to them; a pent-up potential which is all too visible.  I love that.  Given that the pleached avenue isn’t imminent and given that I’ve got all this alder and willow, I thought I’d try pollarding some of them.  I’d like to have battalions of clenched fists, raised  in mute fury at a washed out, oblivious sky.  There should be more angry clenched fists in gardens,  I think.  Calming. 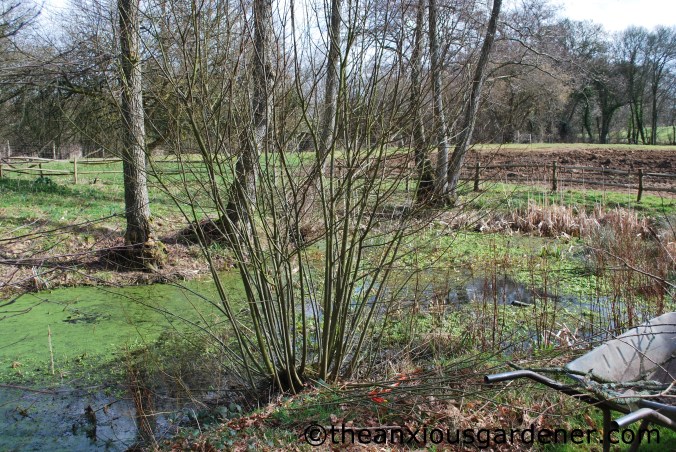 With this in mind, I thought I would take out the majority of the suckers from this old willow stump (above) whilst allowing some of the stronger stems  to grow.  It ended up looking like this:

After (told you).
If I were to cut some willow-withies (you will never know how much satisfaction being able to use that word has given me), I could make a cage out of this.  Or a Wicker Man.  Stick Edward Woodward in it.  Give me someone to talk at.  I wouldn’t burn him but he wouldn’t be able to hurry away like the people from the village do when I try to talk at them.  Spouting their preposterous excuses. 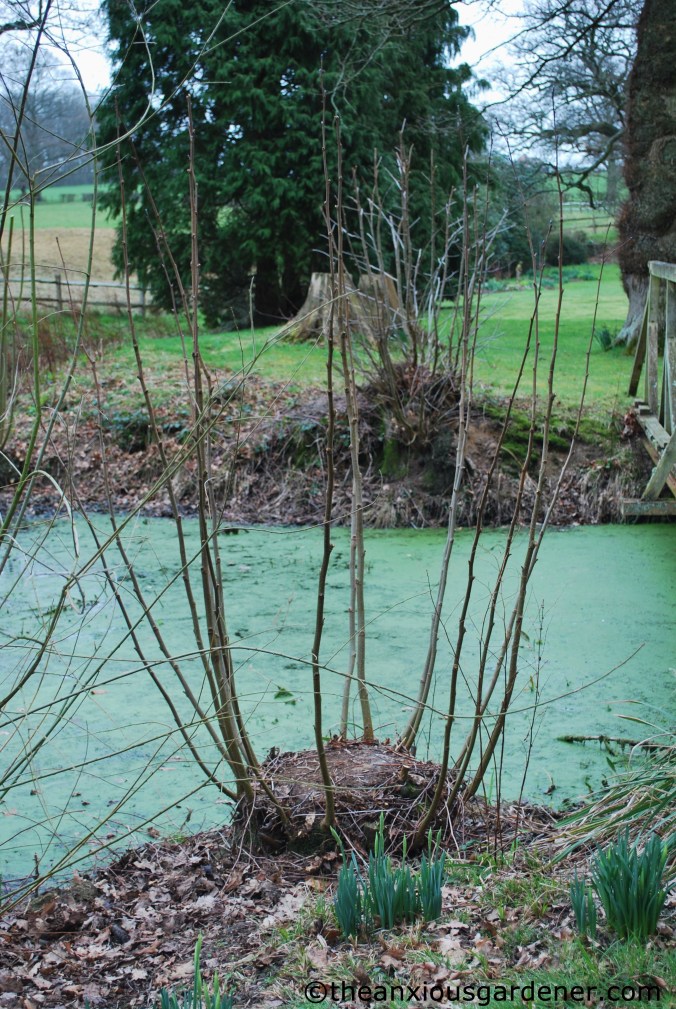 I rather liked the effect of the willow cage, so I followed the same process with an alder stump.  I could cage one large or several smaller people in this one.  Though I probably shan’t.  Instead, I’ll now leave these stems  to grow,  removing any new suckers from the base.  Then, next winter I’ll remove all the side branches again and keep it to the same height.  In time the stems should thicken and the heads swell.
Not sure whether it’ll work or just look pants.  If the latter, we’ll say no more about it and I’ll quietly fetch my bow saw.  No need to ever mention again an idle idea that ended up just looking rubbish. We’ll just keep schtum, OK?