Were you to walk up the drive from The Priory you would, after a couple of hundred yards, come to an area of mown grass surrounded on three sides by a small wood.  In January 2009, I thought it would be a good idea to plant Eucalyptus gunnii here; three of them.  So I did.

Here is a photo from that day showing the young trees barely as tall as my spade.  I wanted to plant eucalypts, after reading an article about a garden in, I think, Sussex.  A beautiful garden with a high storey of eucalyptus and a lovely under-planting of light-shade loving plants.  I can’t for the life of me remember which garden it was but I was taken with the idea.  Now though, I regret planting something so, well, alien in the Sussex Weald.  I wish I’d planted hazel or sweet chestnut.  Yes.  A nice sweet chestnut copse; that I could coppice.  Something native – or at least something that has been native for a couple of millenia.  (Sweet chestnut was introduced to Britain by the Romans).

But I didn’t and now, almost three years on, the eucalypts have romped away.  I have stuck an Anxious Gardener into shot to give an idea of scale.  (For those of you still using old money, 1 AG = 6 feet or 1 metre 83cm).  The eucalyptus above has done particularly well.

The second tree is also going strong. (Incidentally, despite looking like fake, ceramic toadstools, those are real ink caps). 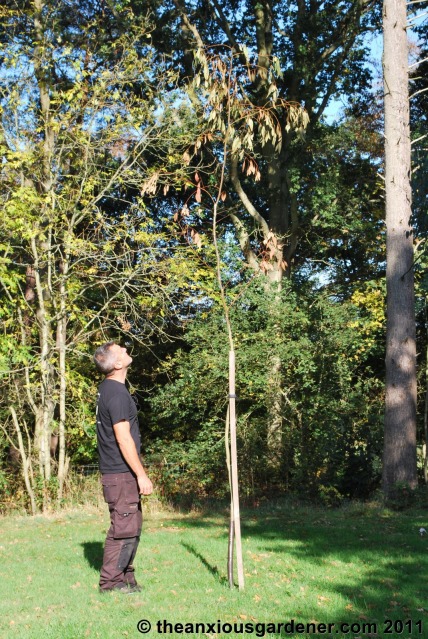 And the third eucalyptus?  Frankly rubbish.  It isn’t well and is either dead or dying.  Shame.  I shall leave it be over the winter and see whether it re-sprouts next spring.  I have experience of failing eucalypts; oh, yes. 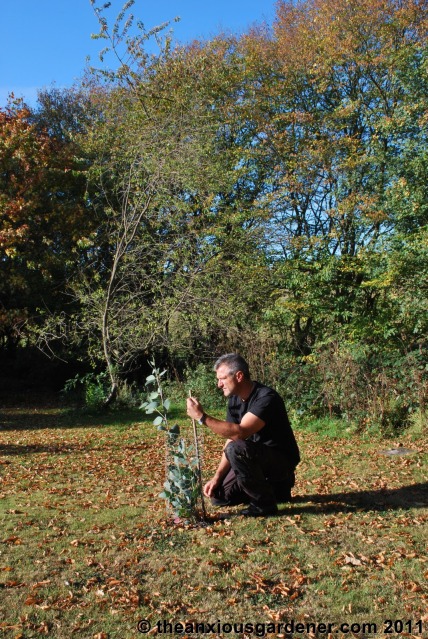 On a further area of lawn, is a snow gum (Eucalyptus pauciflora) a particularly beautiful tree and super hardy (-20C).  Something wasn’t right however because though it was seven or eight feet tall when I planted it, this year it died back to ground level.  Now, whenever I walk past it, I crouch down and give it a little pep talk.  It seems to be responding and is coming back.
There is one other eucalyptus at The Priory.  This is also a gunnii and I planted it last year in the garden, in the rock border.

Here, I am growing it as a shrub.  In its second (forthcoming) spring, I shall cut the stem down to 18 – 24 inches and strip off any remaining branches.  I’ll be left with a ‘stick’ in the ground.  Lovely.  I shall panic – but then within a few weeks the ‘stick’ will re-sprout and I’ll have an impressive flush of the pretty, round, glaucous juvenile leaves.  (As the tree grows bigger its leaves become thinner, longer and more pointy).  In its third spring (and subsequent ones), I shall snip off all the branches to encourage fresh growth.  I’d better not forget to keep on cutting it back.  Eucalypts become big trees.
There is an enormous specimen at Sheffield Park (a National Trust property in East Sussex).  Planted in the first years of the 20th century you, me and another couldn’t link arms about its mighty trunk.  They are impressive evergreens but they grow very big, very fast and are brittle; shedding branches easily and often. So if you’re planning on planting one, be warned.  Don’t plant one near your house (like dozens I’ve seen) and don’t park your mint 1950 Bentley beneath one.
And finally, whatever you do, don’t ever introduce them to Sicily where they will quickly colonize the whole island.
Doh!  Too late.