This cool, wet “summer” has been fabulous for our slug and snail chums.  And I’ve learnt that I’m really good at something.   (What a relief that is).  I’m simply brilliant at feeding slugs.

I can grow a constant supply of slug food;  my repeated sowings of radishes and salad leaves have been much appreciated … 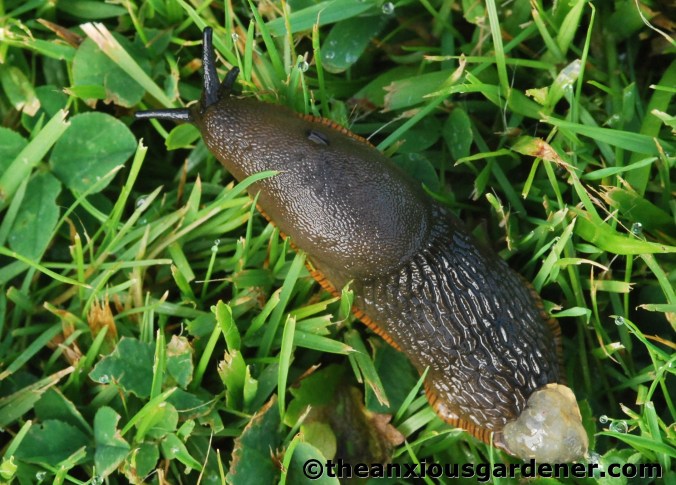 … and cannas.  All have been nibbled, munched, shredded or have simply disappeared.  And, of course, …

Though I skip about the gardens scattering (organic) pellets to my left and to my right, it makes little difference.   The following morning all the pellets will have disappeared and the devastation will have continued.

Still, in the mostly slug-free greenhouse, …

… my four cucumber plants and eight tomatoes are coming along …

… and it won’t be long before we have our first cucumbers.

I’ve bought an irrigation system for these bed-grown plants and it seems to work fine; watering away over the weekends.

In the rock border, the foxgloves are showing off nicely.  Each year I dig up self-sown seedlings, pot them up and then dot them about, aiding their further colonisation of the gardens.  In addition, I grow white ones from seed. 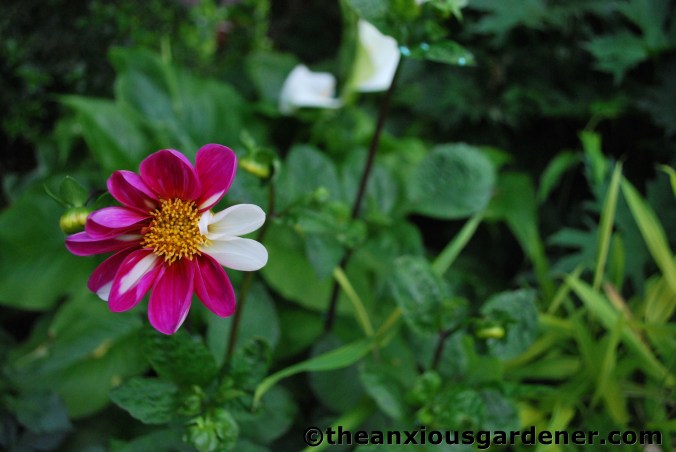 Some dahlias did manage to survive successive slug mauling; this is Dahlia ‘Smarty.’  No two flowers …

…are the same and unlike some varieties I grow (‘Fire and Ice’ springs to mind) this is a  resilient, vigorous plant.  (Slugs often ‘go’ for weaker or poorly, less robust plants).

Also in the rock border, amongst the ferns,  I’ve discovered polemoniums.  Never seen it before; never grown it; never bought any seed.  Its seed must have lain dormant in the soil.  Waiting.  Just waiting.  Either that or there’s a  guerilla gardener about! 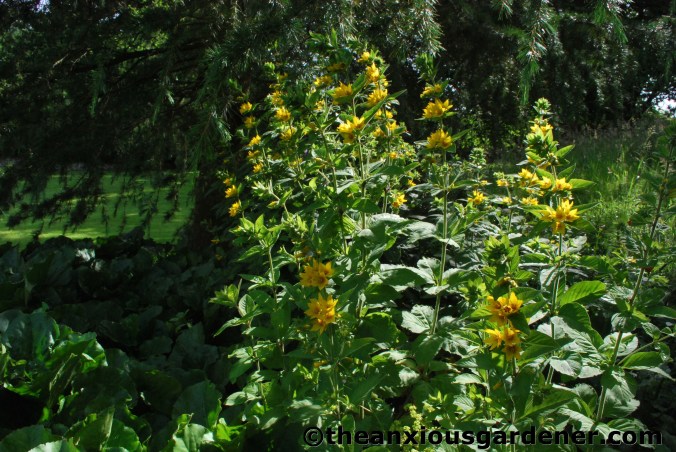 At the rock border’s far end, and increasing year on year, is a clump of yellow loosestrife (Lysimachia punctata).  To the left of it is bergenia – which I moved here from another part of the garden.  Incidentally, I always cut off all the bergenia leaves in spring; this removes all the tatty, browned ones.

This was the bergenia de-frocked in April; looks a little startling but the new, fresh leaves soon emerge.

In one of the kidney beds, my Crambe cordifoila has flowered again.  Last year the stems collapsed, so this year I’ve given it a damn good staking – and it is holding up.  Oddly, the slugs don’t seem to bother it.

At the back of the kidney beds are Foxtail Lilies (Eremurus stenophyllus).  I’m hugely pleased with these  – the first I’ve ever grown.  But they were prone to slug attack too and from ten bulbs, only two or three have flowered.  Hopefully they will do better next year. 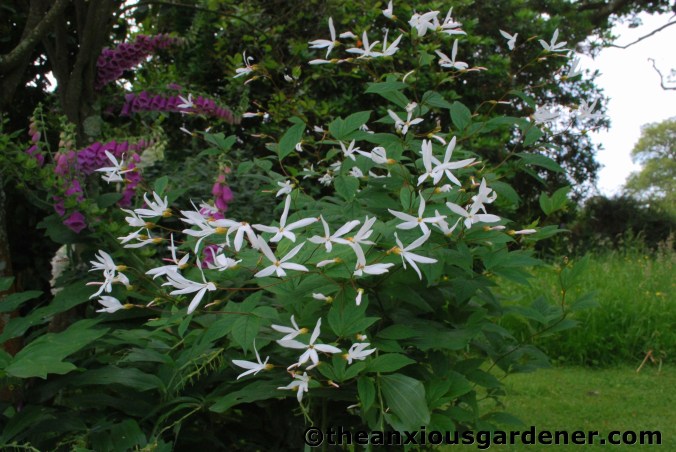 Also in one of the kidney beds is a lovely, understated plant: Gillenia trifoliata.  This pretty, little thing is one of the very few plants I took from my old garden when I moved house.  It doesn’t seem to be widely known or grown.  It ought to be both, I think. 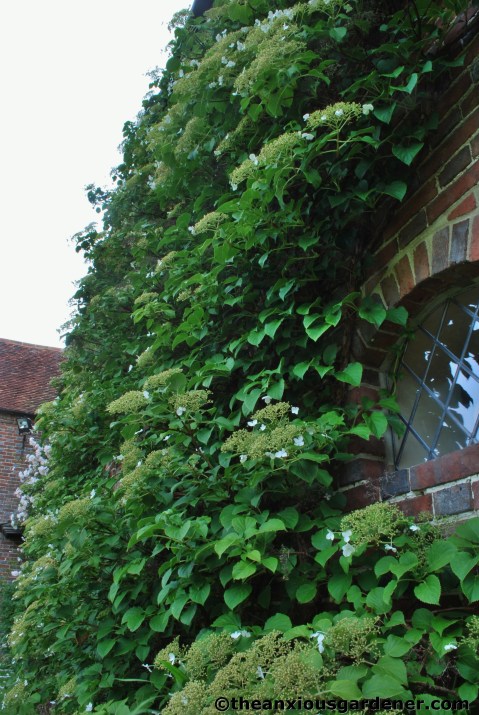 On the west wall of the house is a marvellous (and huge) climbing hydrangea (Hydrangea petiolaris).  Last year all the flower bud was lost to frost.  This photo, taken a bit too late, doesn’t do it justice – the display this year was a good one. 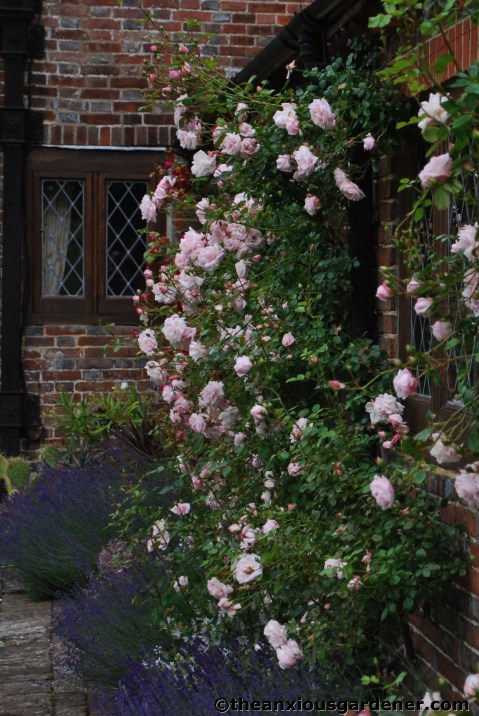 At the back of the house, a very old rose (possibly ‘New Dawn’) fills the confined space with scent … 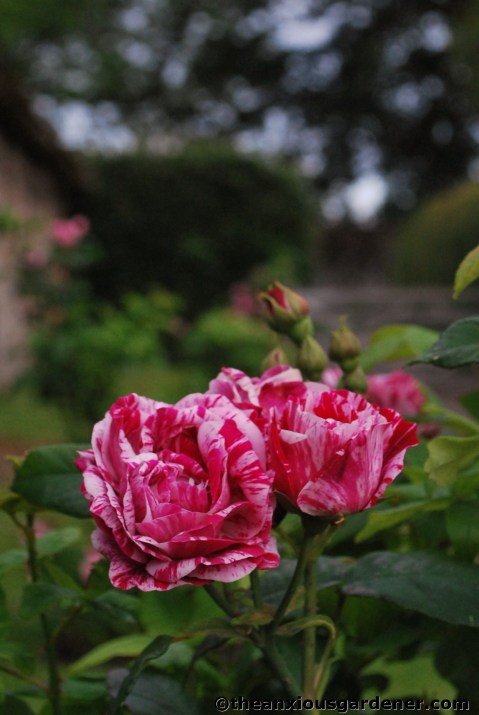 … and in the car-park, four Rosa ‘Ferdinand Pichard’ are getting established.  Planted bare-rooted a couple of years ago, they also have a superb scent. 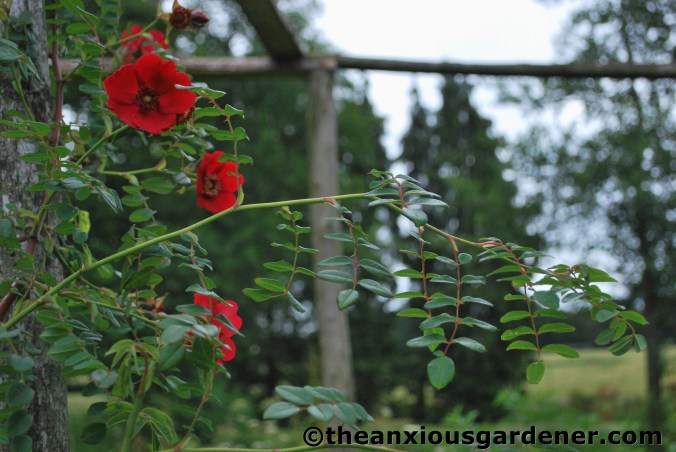 On the rose tunnel, and flowering for the first time, is Rosa moyesii ‘Geranium.’  No scent but a beautiful, simple flower which later form large brilliant orange, flagon-shaped hips.  (Thanks to Francie for introducing me to it). 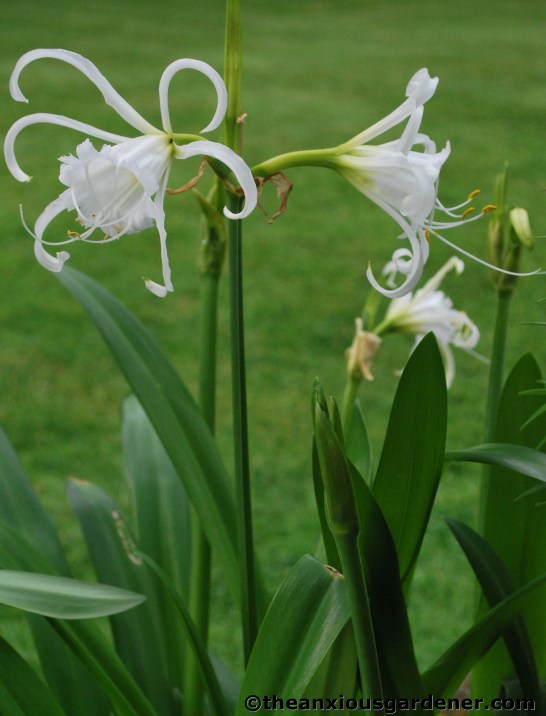 And finally, another plant which I haven’t grown before (put in a pot to protect it from slug-dom); the exotic looking Peruvian Daffodil, the Spider Lily or Ismene (Hymenocallis x festalis).  Rather lovely, don’t you think?

So, despite the best efforts of all those blasted gastropod molluscs, there is some flower in the Priory gardens.  With, I hope, lots more to come.