Back in April, I told you about the new tropical or hot border I was developing (see ‘Planning for the Tropical Border’).  And I promised to let you know how it turned out; unless, of course, it was a humiliating disaster in which case I most certainly would not.

Well, actually it hasn’t been too bad (despite the absence of a ‘topical’ summer) so here are a few shots taken over the last few weeks.

While foliage plants including Colocasia esculenta, Tetrapanax papyrifer ‘Rex’, Melianthus major and the bananas Musa basjoo and Ensete maurelii all put on good growth and should be more impressive still next year. 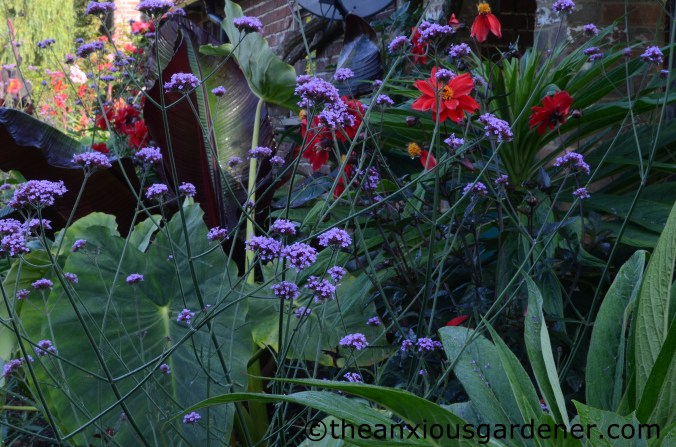 I’ve really enjoyed watching an entirely new bed fill out with unusual and exotic large plants, with the big leafy planting meshed together with Verbena bonariensis. 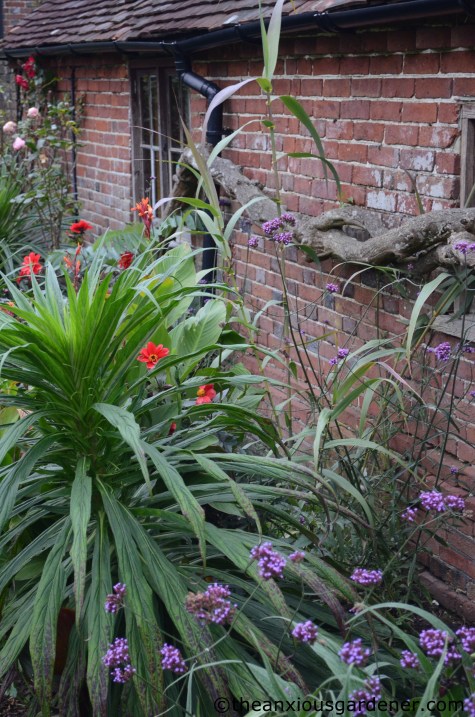 Not everything has been a resounding success.  The giant reed (Arundo donax – centre, rear) only threw up three or four canes and looks decidedly spindly; but it is a thug and I’m sure it will muscle itself to the fore next year (though I wish I’d followed Christopher Lloyd’s suggestion and bought the variegated form).  And also (sniffle) my Echium pininana didn’t flower (sob); I grew them from seed last year.

Here they are (right) just after they were planted out in May.  I  had banked on them carrying the whole border on their tall, stately, blue-flowered shoulders.  But no, they have let me down and must be transplanted back to the greenhouse to overwinter, in the hope that they will flower next year.

… and moving them is hard work.  And besides, I’m not convinced they will survive the process and another winter under glass. 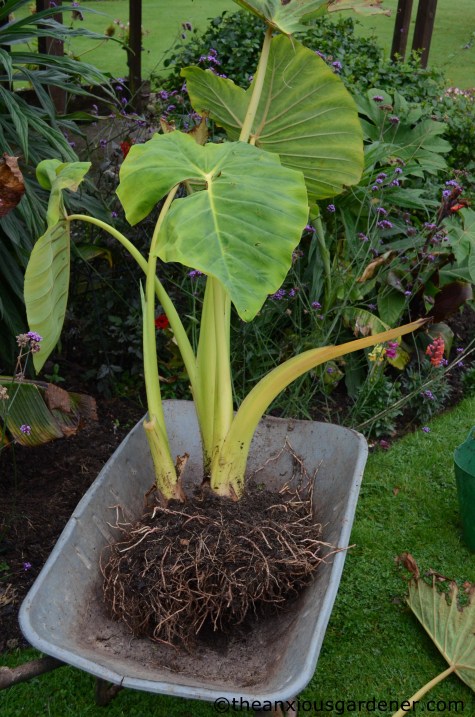 Colocasia is easier to handle and barrow …

… to where I could pot it up in leaf mould.

I almost put my back out moving this fellow.  The red banana (Ensete maurelii) is instant impact when planted out in the spring. 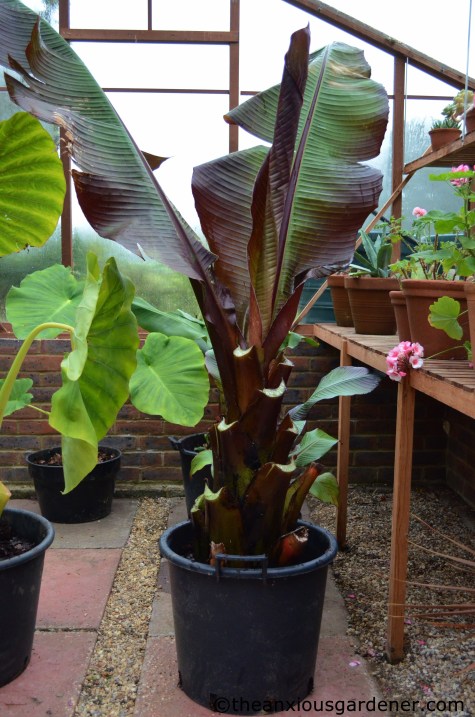 Though I wonder how much longer I will be able to lift this particular specimen without help.

The hardy bananas (Musa basjoo) are not worth lifting.  They are young and didn’t grow much and so can stay put.  I don’t mind if they are killed back down to ground level – which is what will happen if I don’t protect their stems.  But over in what was an experimental ‘tropical border’ last year is a … 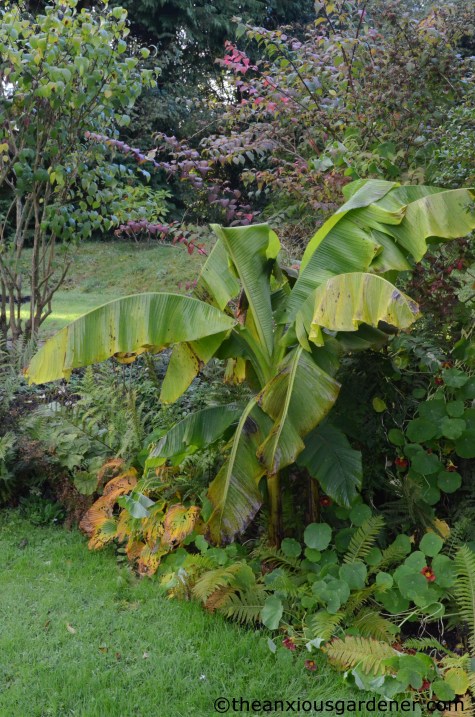 … larger specimen.  Last year I wrapped it in hessian to ward off frost. 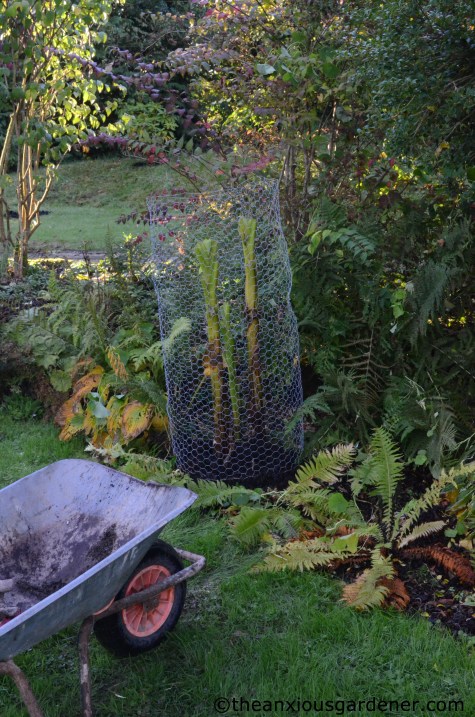 But I obviously didn’t do it thick enough and the three-foot trunk turned to mush.   This year I intend to protect it properly.  I put a column of wire netting about the de-leafed banana …

… and then stuffed it with straw (knowing the local farmer is a real boon!). 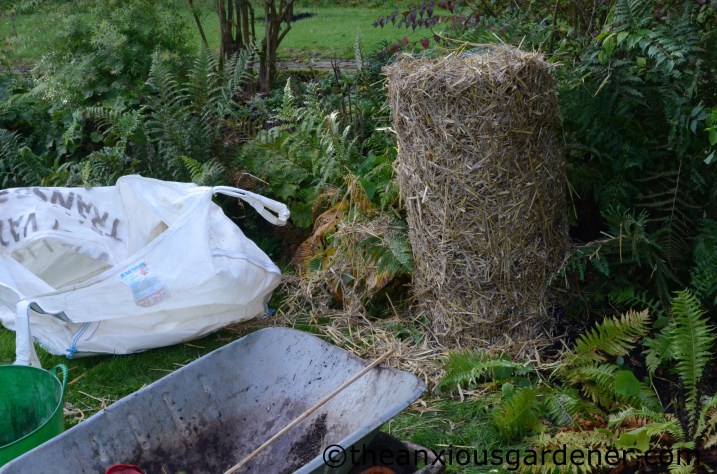 Hmmm.  Not a thing of great beauty … but it should do the job and next year’s new growth will be given a three-foot head start.

I rather like this border.  It is a lot of work preparing it for winter but some of the plants like the dahlias and melianthus and tetrapanax can be mulched and left in situ.   Having seen how the various plants meld together, my spacing next year should be better and, if we actually get some decent sun, then this new bed should really get underway. And, who knows, my echiums might just flower!

29 thoughts on “The Tropical Border Revisited”