I’ve been a little too busy for blogging.  I sold a house, I bought a house and I’ve endured all the fun-filled, stress-free hours that involves.  I’ve also been on a short break to Paris;

and a longer holiday to Northern England.   Last year, I crossed Northumberland on foot (see ‘Walking Across England’) and it effortlessly slipped into my top five English counties.  So when my partner and I received an invite to a Big Birthday Bash Weekend near Rothbury, we quickly decided to make a week of it.  Before the party, we booked into a charming Alnwick B&B and toured about the countryside; ate Craster kippers for breakfast and crab sandwiches for lunch;

visited several stately homes and castles-with-roosting-swallows (wringing every last pound out of our National Trust membership); and hopped on a boat to the Farne Islands.   If I had ever bothered to write a bucket list, the Farne Islands would’ve been on it and I could now tick it off.  But I didn’t, so I can’t. 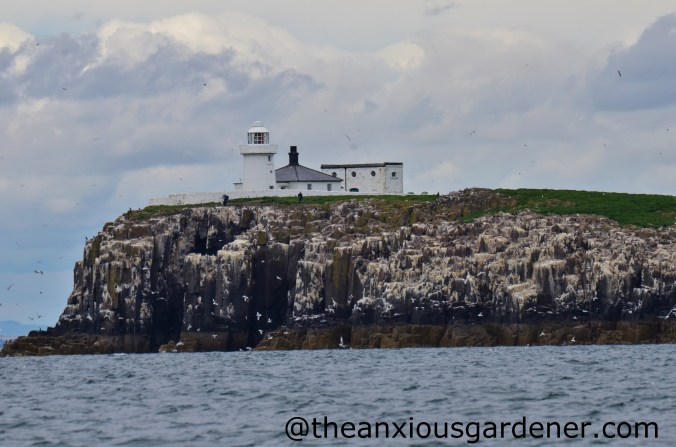 Two weeks ago on an overcast morning in late July, we chugged out from Seahouses harbour and crossed two choppy miles to the islands. 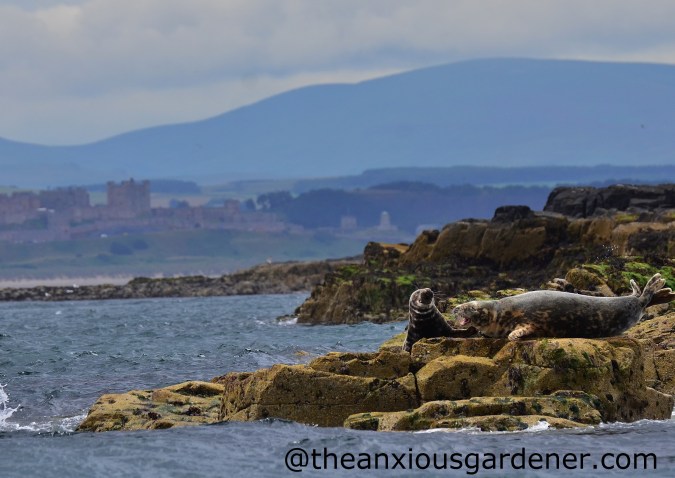 Grey seals with Bamburgh Castle behind

During the summer months, the islands are home to an impressive 100 000 breeding pairs of seabirds – as well as a large colony of Atlantic grey seals. 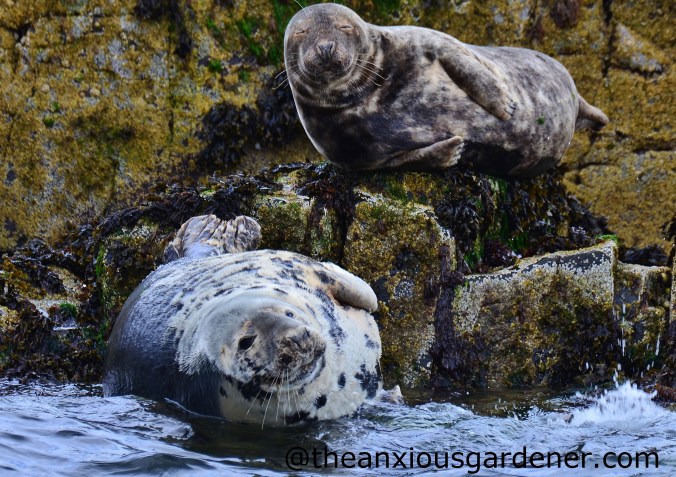 Grey seal pups are born in October and until that happy event, the adults aren’t particularly busy. 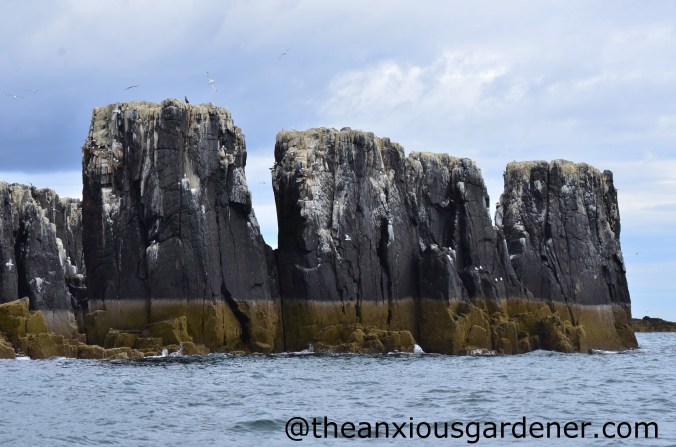 Other than sea-spray, the first thing to strike me on our approach to the bird colonies was an acrid, ammonia stink.

The towering cliffs and rock piers were screaming with life and iced with smelly, fish-based guano.  It’s a rich welcome.

During the height of the breeding season, visitors are advised to wear hats.  Arctic and common terns are protective of their young and dive-bomb anyone walking near their nests.   And draw blood.  But we landed on Inner Farne towards the end of the season and walked about safely – hatless. 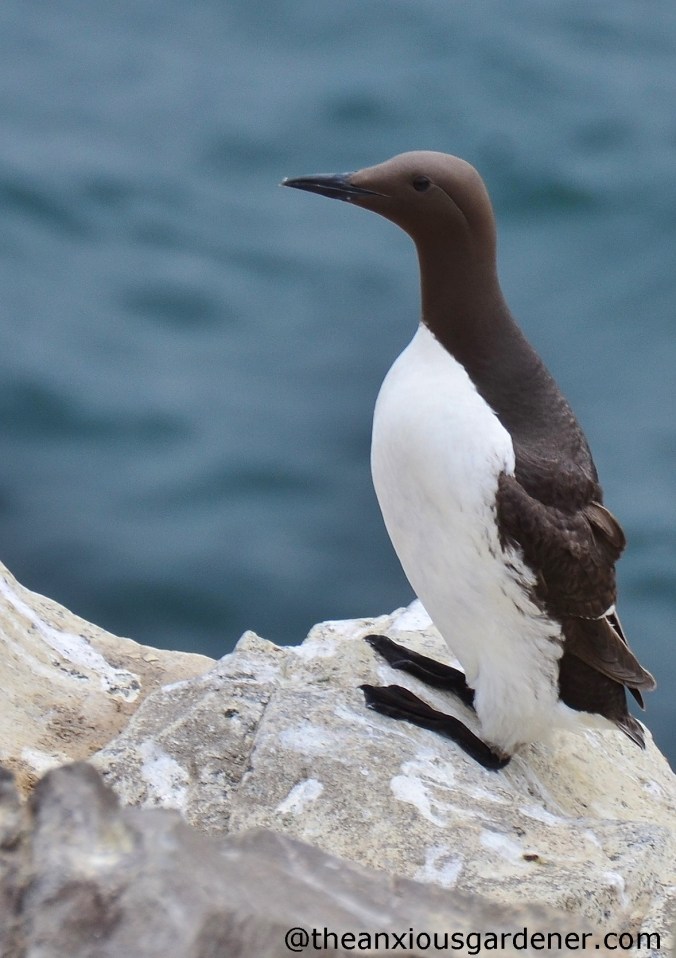 Guillemots are rather more laid back.  I’d seen these handsome auks before near St Bees Head but only at a distance.

Next to it stood a Disney-villain shag.  Unfortunate name, shag.

I haven’t been face to face with an anonymous shag for years. 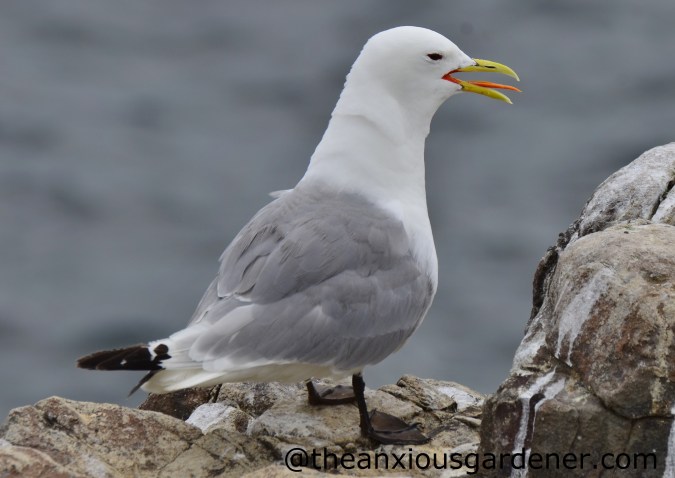 The kittiwake is one of seven species of British gull but the only one that doesn’t feed inland.  Apparently the name derives from their call … but I can’t say I noticed. 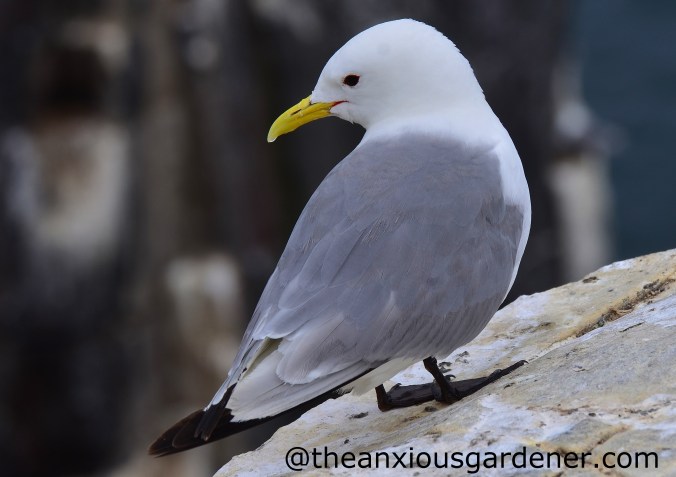 There is a small colony near my home in Sussex but here in Northumberland, I was right in amongst them and could have touched one, had I thought it appropriate. 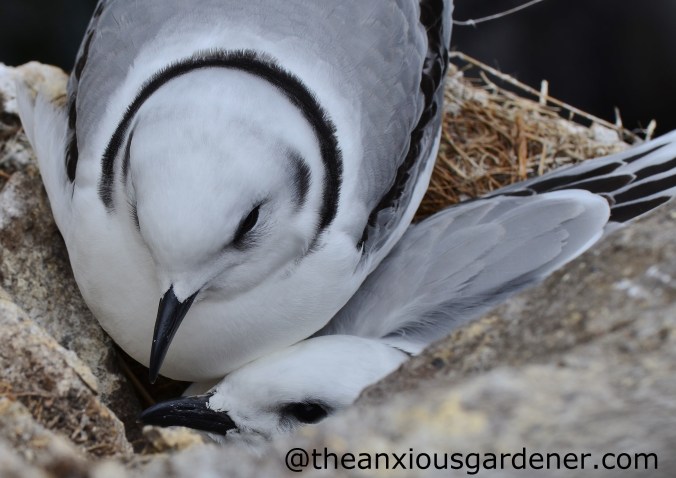 This pair of juveniles nestled inches below my feet.

But, of course, there was only one bird I especially wanted to see and for which the Farne Islands are famous.

You’ll understand my excitement at seeing puffins for the first time and watching a whole flotilla (or raft – to use the proper term) bobbing about on the swell.

Puffins are one of Britain’s most popular birds and it isn’t difficult to see why. 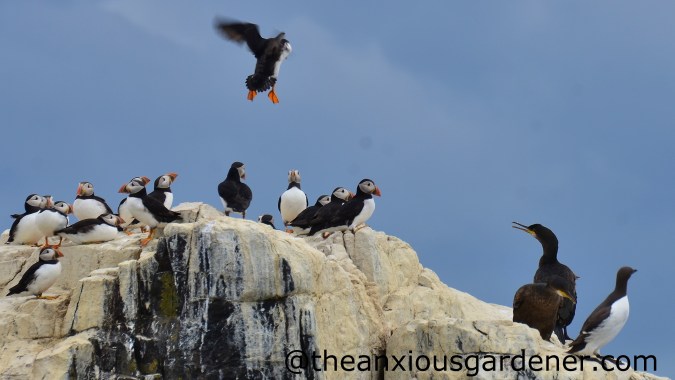 They are attractive, brightly coloured, endearing and slightly comical.  Even a shag thought so.  If not the guillemot, who’s seen it all before.

According to The Guardian, 2015 wasn’t a good puffin year.

Freak summer downpours drowned the burrows which the birds dig, build a nest in and lay a single egg.  Of the 100 burrows monitored by Farne rangers, only 50 pufflings (yep, proper word) successfully fledged.  In 2014 the number was 92.

Depending on weather and food supply the islands’ breeding colony varies between 30 000 and 50 000 pairs.

But by mid August they’ll all be gone.  After raising their chicks, puffins spend seven or eight months at sea.

Our witty, knowledgeable boat captain* told us that puffins are known locally as Tommy Nodders.  Which is a fine name; unlike shag.

In poor light, I had no expectation  of photographing Tommy Nodders in flight.  Even less so with an iconic bill-full of sand eels. 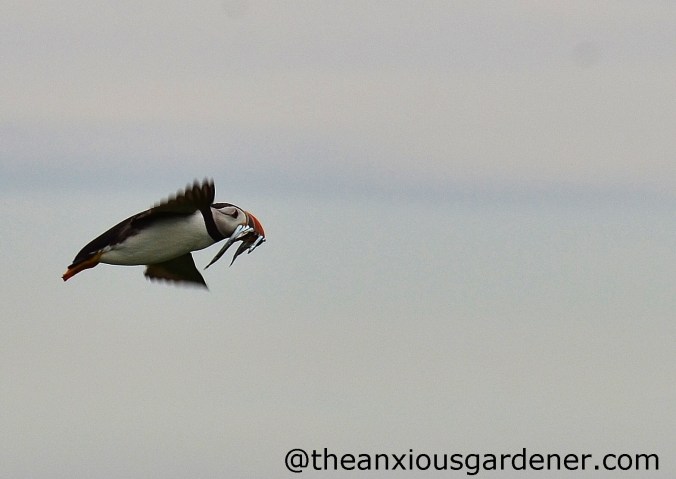 But then that is why the Farnes are so captivating.  I saw plenty I expected and plenty more I didn’t.

*We used Billy Shiel’s Boat Trips and heartily recommend them.  I’d suggest phoning in advance: boats get fully booked and only sail if conditions are good enough.  (All tours were cancelled on the two previous days because of rough seas).  Our two and a half hour jaunt lasted three hours (bargain!) and cost £15 each.  If you are not a member, you pay extra for landing on the National Trust owned islands.  Boat trips run from April to October and unlike us, you might even see dolphins.  There are a range of trips available but HERE’S the one we did.

43 thoughts on “The Farne Islands”