… is foolhardy and best avoided.  (I could end this post now, I suppose … but let’s press on for now).

Over the summer, I’ve been fascinated by wasp nests in the grounds of The Priory. 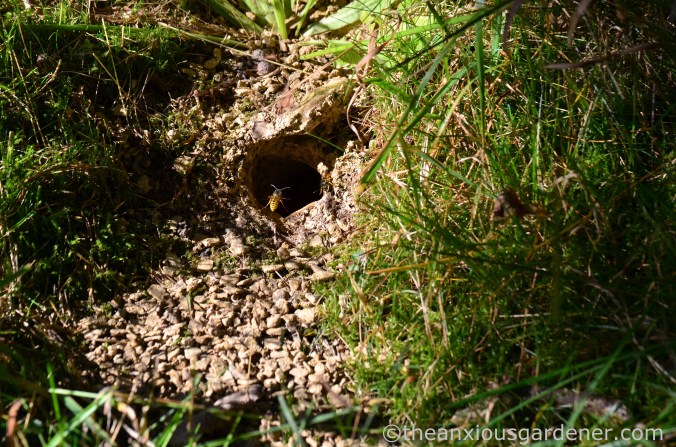 One is visible enough to avoid treading on by mistake.  The nest, like most in the garden, is in an old vole hole and sits on a dry bank under a large oak tree. 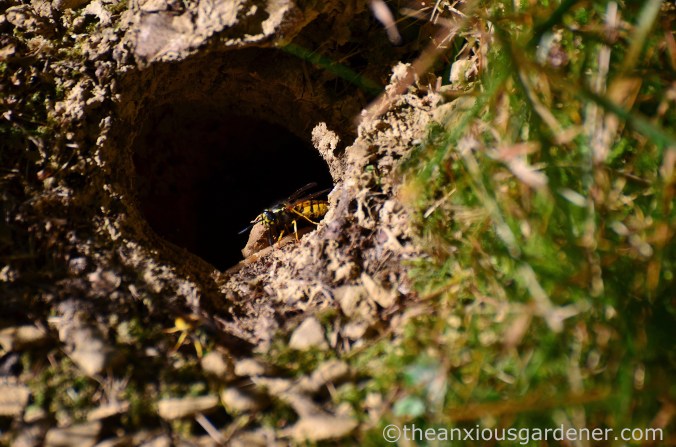 Voles don’t make holes to a wasp’s  satisfaction and it is the excavations to enlarge the underground space that make the nest so obvious.  Standing quietly, with workers zipping past my ears, I’ve watched wasps carry out pebbles and lumps of clay bigger than themselves. 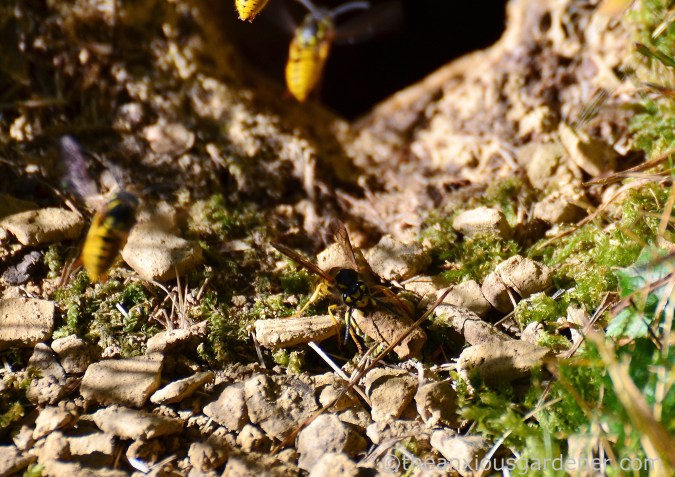 They take these lumps several inches from the entrance and dump them on the spoil heap.  I’m intrigued at how large this underground nest is and, in a couple of months when it’s deserted, I might have to dig it up. 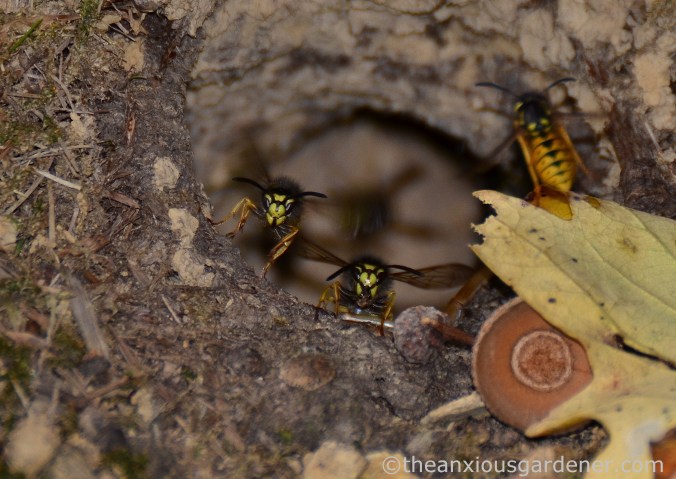 There is a second nest about twenty feet away on a stretch of lawn behind the greenhouses.  This one is easily visible too and I’m careful to skirt around it with the mower.  (Having mowed a wasp nest before, I’ve learnt not to do so again).

But I discovered a third nest only when I strimmed over it and remained blissfully unaware until I felt a sharp pain on my knee and glancing back saw a squadron of angry Vespula vulgaris spiralling out of their hole.  I legged it and escaped with only the one sting. 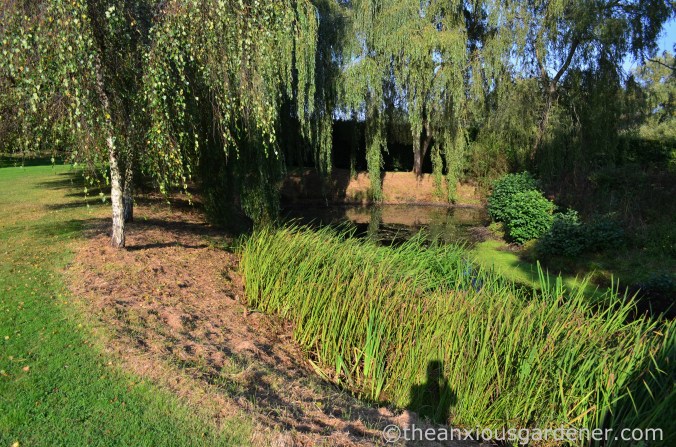 Strimmed edges of the west pond

But wasps or no, I must press on with the strimming.  Autumn is the time for cutting back pond edges, ditches, the outer fence line and areas of long grass I’ve allowed to grow for the benefit of wild-flowers.  I’ve strimmed these areas for years and – up until the Knee Sting Incident – had never disturbed a wasp nest.  I put my wasp attack experience down to bad luck (but not so bad as my friend Nick.  He gets stung many times each year: most recently when he sawed through an otherwise invisible nest with a hedge-cutter.  He suffered twelve stings to the head and neck).

I could wait for frost to kill the wasps but by then the cold and autumn rain will have flattened the grass (which makes the job far more difficult).  I strimmed the west pond without incident and moved on to the east pond.  I’d completed about fifteen feet when I suddenly felt a sting on my stomach and another on my back.  Panicking, I looked down at a wasp on my shirt and then glimpsed a menacing cloud of yellow warriors erupt from the base of an old alder stump.  I was too busy running to see much more after that. 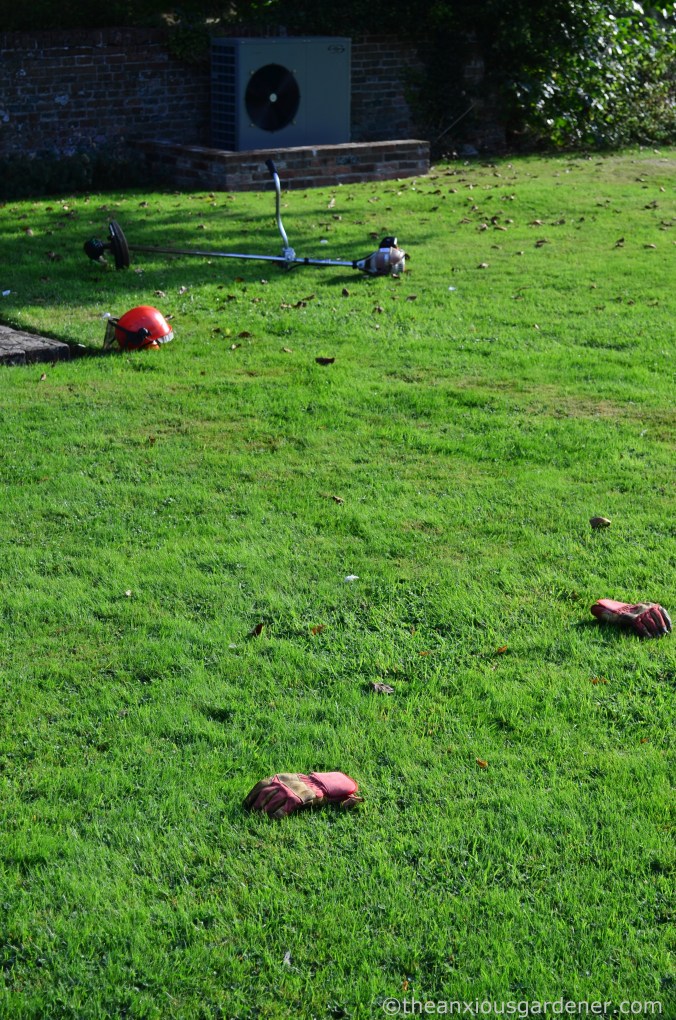 Casting aside the strimmer, my helmet and lastly my gloves as I sprinted across the lawn, my yelps brought Jim running from the far side of the garden.  We hid in an outbuilding, closed the door and brushed off three more wasps from my clothing.  I’d been stung four times and if the initial pain was bad enough, a week of soreness and itchiness was worse.  Possibly. 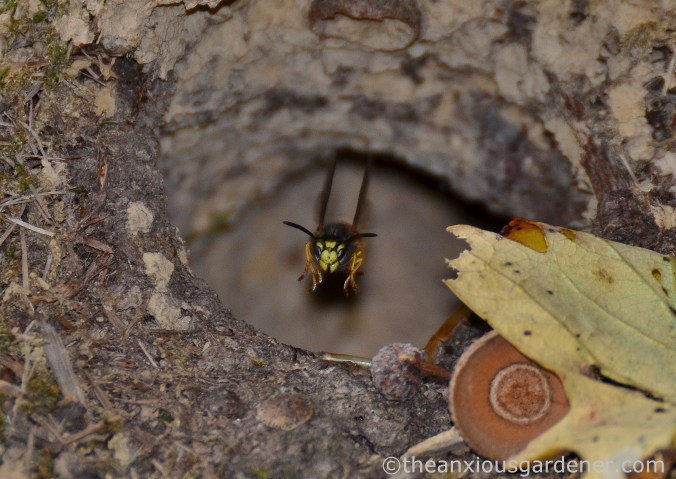 My enthusiasm for strimming evaporated (from an admittedly shallow pool) and I didn’t pick up the strimmer for 10 days.  And when finally I did?  I hit another wasp nest within a couple of minutes.  Thankfully, this time I saw them emerging before they stung me and once again I disappeared in a cloud of Anglo-Saxon invective, leaving a trail of gear in my wake.  I’m not having much luck with strimming this year but I shall have to try again.  I’ve already hit three more nests this year than in the previous seven years combined.

Surely I won’t disturb another one, will I?   (I did actually.  I tried strimming twice more after publishing this post and both times struck another nest.  No stings from one, but one on my leg from the other.  Exasperated, I stopped completely until after several severe frosts).

Despite my current red alert level of wasp-fear, I have no intention of poisoning any of The Priory’s nests.  Wasps are important pollinators and prey on a range of pest insects.  Generally – apart from 2016 – I don’t find them a problem and I’m happy for us to co-exist.  So long as they are.

64 thoughts on “Strimming A Wasp Nest …”