One good thing about growing older is ….. nope, I’m struggling.  One thing about growing older is that the physical graft of professional, full-time gardening becomes harder.  An obvious insight but one I mention nevertheless as it has become increasingly noticeable during my working day.  My back aches more than it used to, my joints do too; I feel the heat more, I feel the cold more; and certain jobs about the garden tire me out more.

Take mowing for instance.  From early spring to late autumn, Jim and I mow all the grass at The Priory once a week.  It takes us the best part of a day and that day’s clippings fill one of the seven large compost bins.  Full bins need regular turning to make space for the following week; and emptying bins this size with a pitch-fork is sweaty work, if a good cardiovascular work-out.  In almost ten years, mowing hasn’t become easier.  I used to do it all by myself, but halving the work with Jim doesn’t feel like halving the effort.  That’s middle age for you.

Some years, Sussex summers are hot and dry enough to crisp the lawns and virtually stop growth.  Hessian lawns might be unsightly, but any excuse for a pause to mowing is a blessed relief, and I breathe a little, silent whoop of joy.  But this year, frequent warm rain encouraged the grass to grow long all summer … right through to the end of November.  And I breathed a little, silent boo.  Now in December The Priory’s grass needs cutting again but the ground is too wet for the walk-behind mowers or the ride-on.  Whoop, whoop.

The lawns at The Old Forge have similarly grown enthusiastically but here on thin, free-draining chalk-soil the growth isn’t as rampant; and I’ve had the odd week when I could skip mowing altogether.

But it’s not as if a break from the mower allows me to put my feet up and file my nails; it simply gives me the chance to tackle other pressing jobs – such as clipping various shrubs like, a few weeks ago, this holm oak.

It’s quite an easy, thoughtful job, which I enjoy and doesn’t take very long;

but it’s only one of many shrubs and hedges in need of a trim.

Two lines of overlapping holm oak form a hedge which I also cut; as well as, amongst others, forty yards of mixed hedging.  But these are toddler jobs, inconsequential jobs compared to those at The Priory. 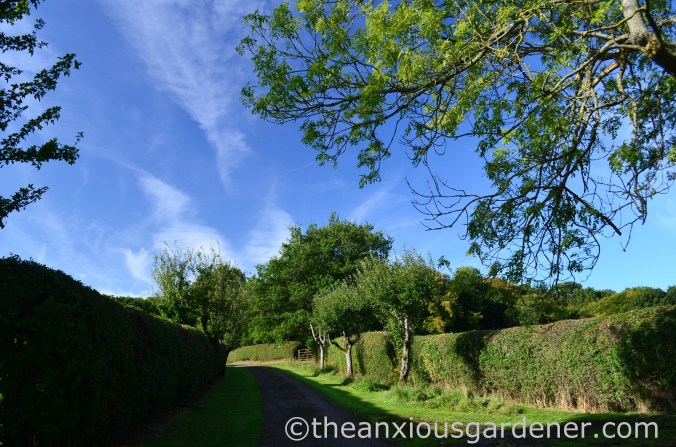 Running alongside the drive, the latter is about three hundred yards long and its annual cut is a task I’ve undertaken since 2011.  Jim and my friend Nick help but even with three of us – wielding hedge-trimmers, raking and transporting all the cuttings to the bonfire – it’s a solid two-day job; after we’ve completed various other bits of mixed hedging on the estate too.  The petrol trimmers are heavy machines and all three of us are wiped out by home-time.

Only this year we didn’t cut it. 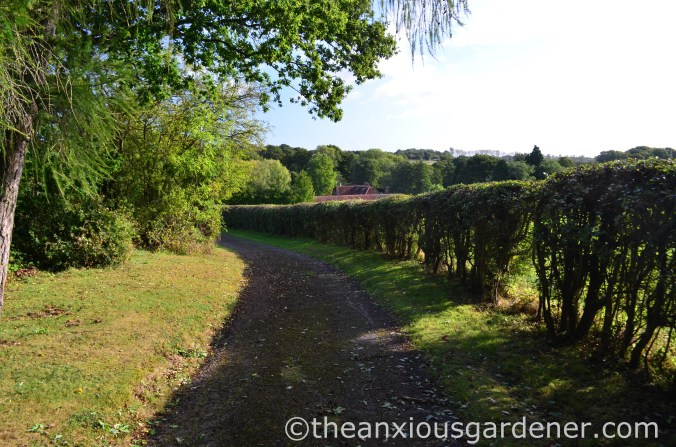 This year I hired a contractor;

and he did a good, neat job.

Ben, the contractor, and his brother then moved on to the 2nd mammoth hedge – the beech, which half-encircles the garden.

Having cut these two hedges for so long, not doing so this year seemed wrong somehow and left a hole in my working calendar.  They are part and parcel of my job and an annual event when, for a few days, every other task in the garden is set aside; with a very satisfying, slap-on-the-back, final result.

So why did I hire a contractor?  Vibration white finger is why, also known as hand-arm vibration syndrome.  Over the past year, the occasional tingling and numbness I’ve felt in my fingers after using power machinery has become constant in my left hand, quietly noticeable whilst reading, watching telly or driving.

There’s really no need for condolences, chocolates or flowers, though it’s kind of you to offer.  My fingers are rarely painful and the condition’s intensity ebbs and flows.  Often, I’m barely aware of it.  There isn’t much I can do about it other than limit the time I spend using petrol power tools to prevent it becoming worse.  With new, non-vibrating battery technology, VWF will hopefully cease to be a problem for gardeners and ground-workers.

I can’t give up using all the tools in my arsenal, of course, however tingly my hand.  But I have learnt to limit my use of the chain-saw, the strimmer and hedge-cutters to forty-five minutes a day.  Which explains why I hired a contractor for the very long, labour intensive mixed and beech hedges.

I still do some hedge-cutting: the small ones, like those at The Old Forge and this yew hedge at The Priory.  But these are relative tiddlers and are done and dusted within an hour, keeping the vibration to a minimum.

Autumn is peak strimming season and most days, I use the strimmer to clear away old, long grass – if only in those 45 minute bursts.  And, unlike last year, I haven’t strimmed a single wasp nest … which made me extraordinarily happy.

As Ben cut The Priory hedges he piled the off-cuts in an old nissan hut, keeping them bone dry for when Jim and I could light a bonfire. 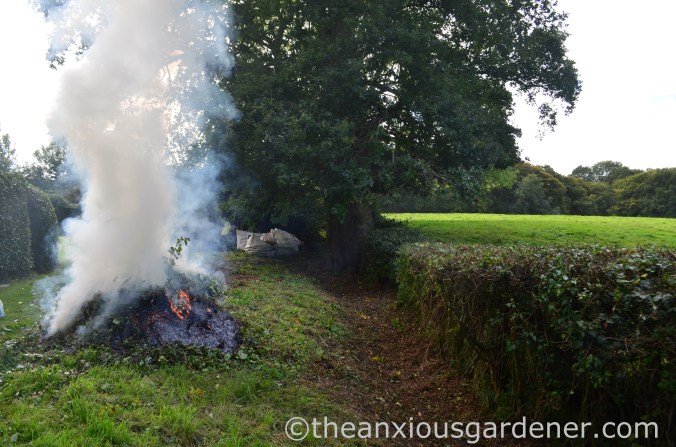 There was so much waste that it took us two days, on and off, to burn it all. 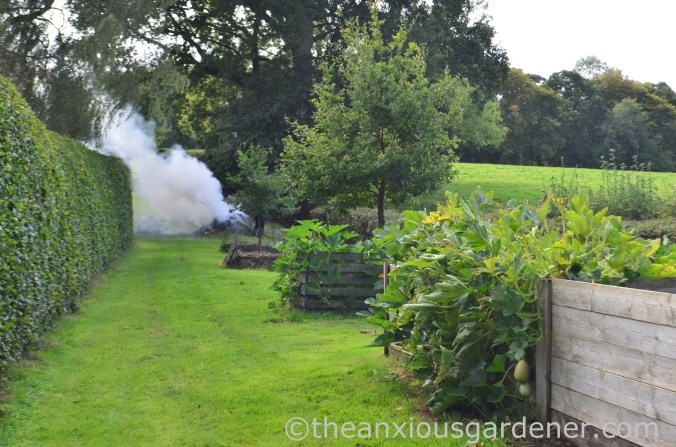 So, I was a small cog in cutting The Priory’s hedging after all – if only in a peripheral, non-vibrating kind of way.

Still had to have a doze when I got home though.TheSave