A few years ago, a friend gave me a barely liftable, large trug of snowdrops.  I was very, very grateful and happily began adding them to the Priory’s meagre showing.  Eventually running out of time, I temporarily stuffed the last few into a small bed beneath a standard Viburnum tinus ‘Eve Price’.

And there they temporarily sat – for three years; neglected, multiplying, annoying.  Plonked amongst heucheras, they looked out-of-place and then messy as they slowly died back after flowering.

And then dug up some more – there were far more than I expected.  A little neglect does wonders for increasing your stock it seems … and produced a second surfeit of snowdrops.  (Now’s the time to dig up, divide and replant snowdrops ‘in the green’ – before, during and after flowering.  You might quake at digging up flowering plants, and normally I wait until they finish, but they won’t mind if you don’t).

Afterwards, the ‘Eve’ bed looked simpler and neater – especially after a top coat of leaf mould.  (The heucheras fill all this space later in the year).

Most of this second bonanza of snowdrops went into new planting squares beneath the extended rose tunnel.  I used a bulb planter and filled the bottom of each hole with leaf mould.  If I was over generous with the number I dropped into each hole (and I was) another surfeit in a couple of years wouldn’t be so very terrible.

I back-filled with a mix of more leaf mould and garden compost, soaked well, stood back, studied the horizon, waited 10 months 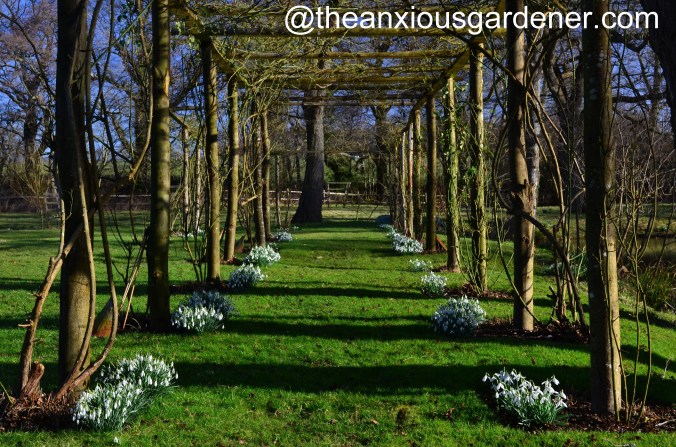 and up they came. 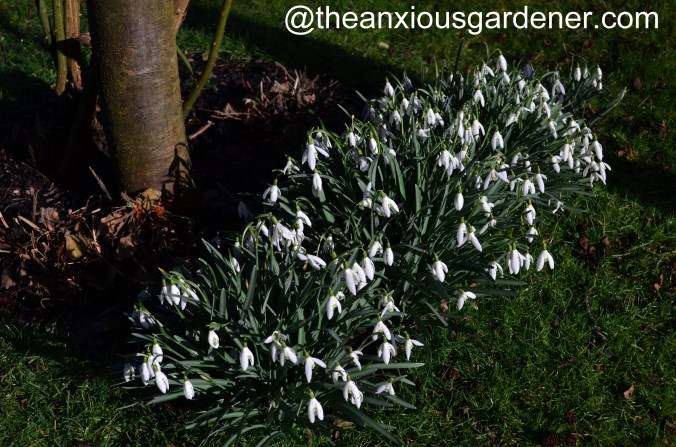 Some of the original planting pockets are now overspilling but I’ll divide and replant these galanthus soon (there’s only so many times I can use the word snowdrop). 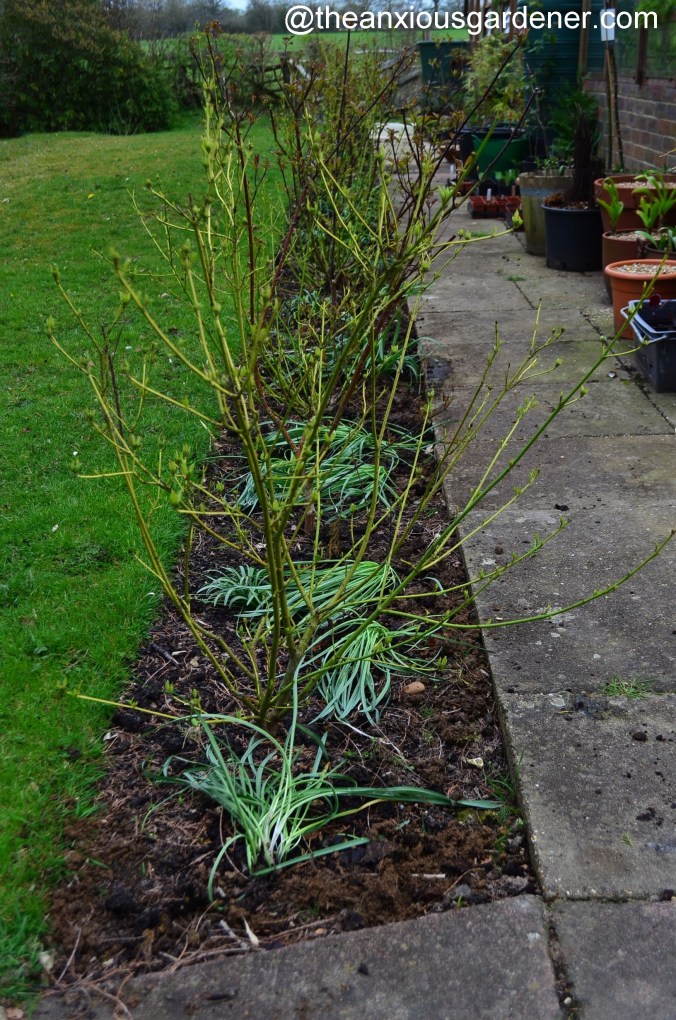 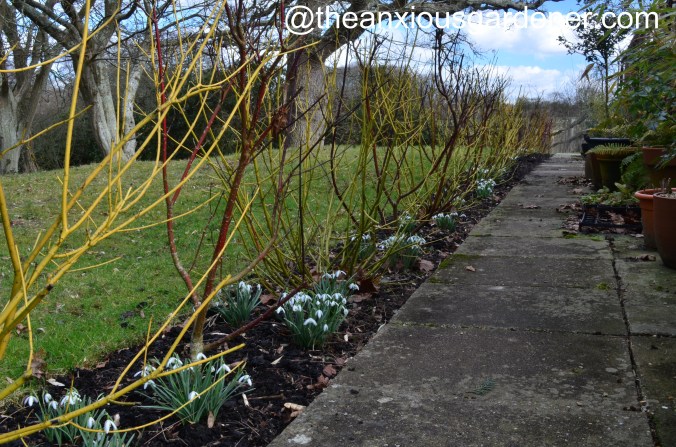 these too are now in flower.

Whoever planted the beech hedge had the same idea but failed to take into account how long beech leaves hang around.  The under-planting of snowdrops is lost somewhat; the flowers almost invisible.

But I haven’t the heart to move them – they seem happy and I, at least, know that they are there.

and a paltry handful for under the big trees on the meadow (more than lots needed here).

Thankfully, there are several ‘spare’ clumps earmarked for the meadow and the slope.  There’s these in a neglected area. 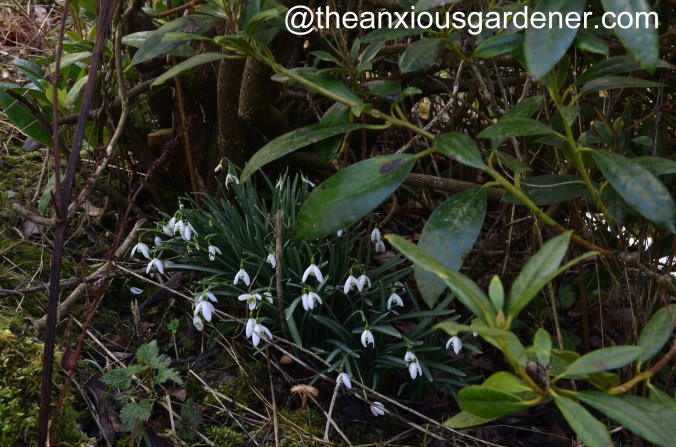 There are more skulking, unloved, beneath a rhododendron, 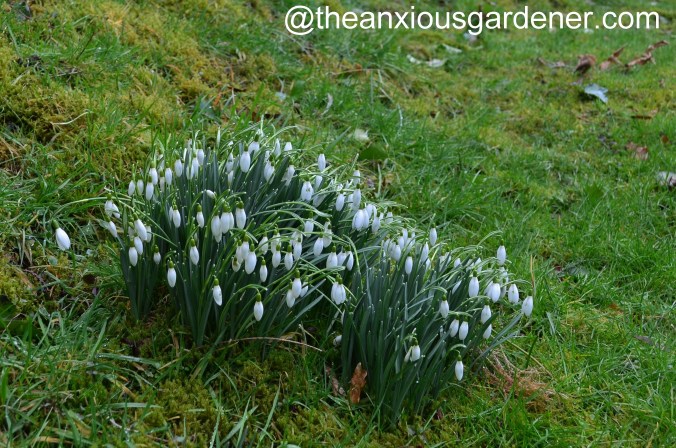 a venerable cluster in need of division on a lawn

and a large grouping in one of the borders.  I filch snowdrops from this patch every year but the supply seems to hold constant.

Increasing the number of snowdrops at the Priory has become an ongoing, long-term duty 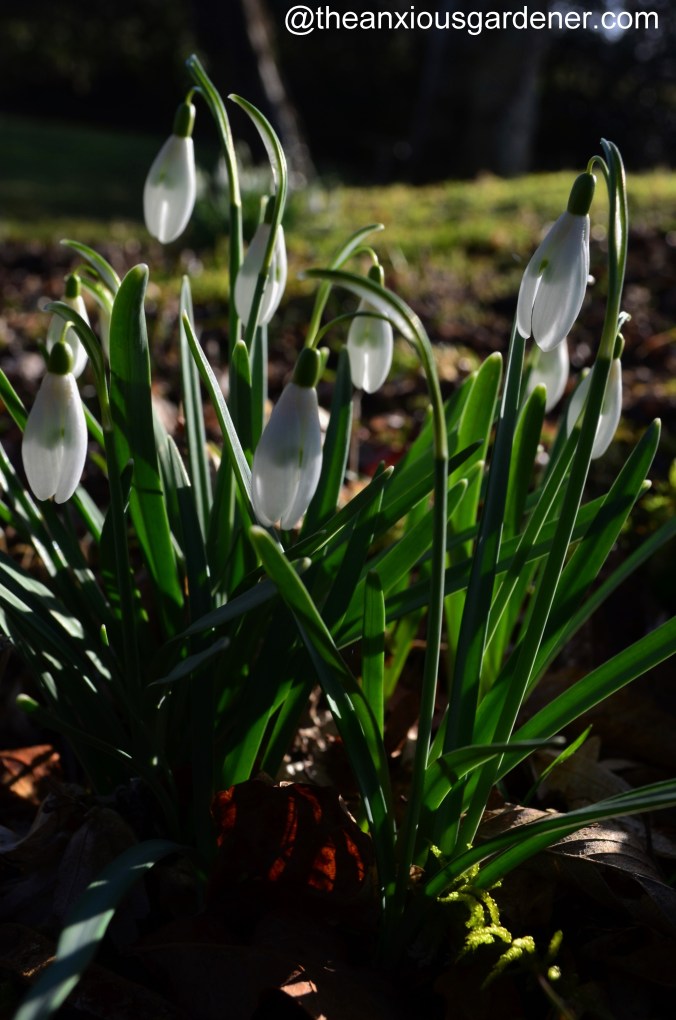 and I hope that when I leave the Priory, I can leave a legacy of widespread, white and green, nodding carpets.

I had best stop daydreaming and get on with it.

27 thoughts on “March Of Snowdrops”