My recent post,  Aconitum Anxiety, led me to think on the possible hazards I face at work – as any report of a gardener’s sudden death is apt to do.   Not that I worry too much about danger and mortality but it did remind me that I wilfully ignore some gardening safety advice.

There is an awful lot of general do’s and don’ts and we all make choices on what we adhere to and what we ignore.  Let’s face it; some advice seems excessive for the perceived risk or is simply too inconvenient.  For instance, I ought to wear sunblock and a sun-hat against skin cancer.  And I do … mostly.  But if the sun suddenly pops out on a grey day, I don’t run for sun-cream or hide in the shade until it slips away again.  And far too often I will mow all day in full sun with no protection which, frankly, is just stupid.

There is an argument for always wearing gloves whilst gardening but as I like the ‘feel’ of my job (and my tetanus jabs are up to date) I only pull on a pair against obvious hurt.

I know there is a real danger from spore and bacteria inhalation when turning compost, yet I don’t wear a dust mask (as recommended by the RHS).  Should I?  Probably.  Does anyone I know use one?  No, they don’t.  And frankly I don’t want to: forking rotting, smelly compost is hot enough work without a face mask.  Besides, masks fog up my glasses.  I’ll take the risk. 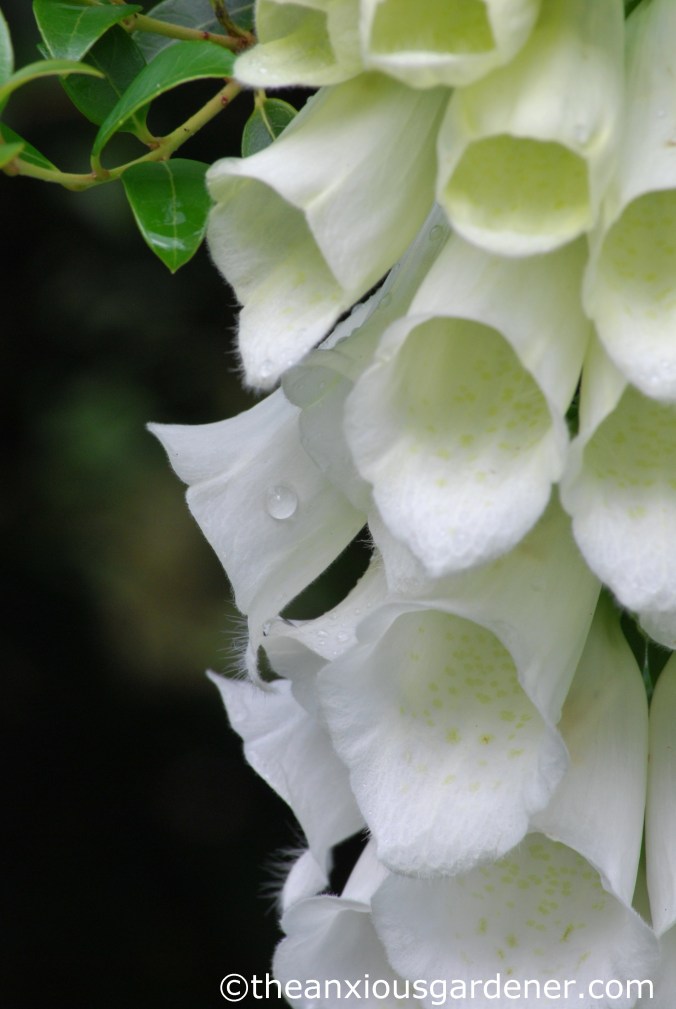 I also know, of course, that some plants are potentially dangerous but I choose not to remove them.  Aconitum napellus is a good example and neither would I consider felling the Priory laburnum – seed pods and other parts lethal if eaten.  (Haven’t you read ‘My Cousin Rachel‘?).  On the other hand, a client once asked me to dig up all the foxgloves in her garden for fear her children would be poisoned.  Personally, I thought that was excessive but hey, her garden, her decision. 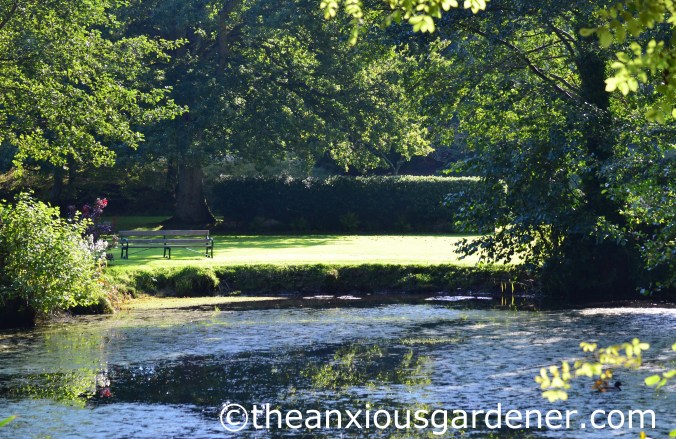 I see the Priory ponds as a huge aesthetic bonus to the garden as well as fantastic wildlife habitats.  But however delighted I might find the big expanse of water, parents with young children will probably view them with unease and be reminded of the ‘Don’t Look Now‘ drowning . 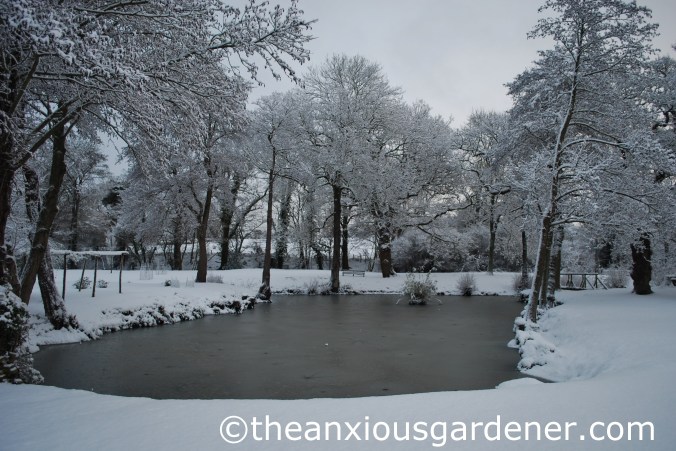 The east pond with snowball!

And with just cause.  One winter, a few years ago, my partner, young son and I had a terrific snowball-fight.  Unnoticed, Solo our stinky terrier, mesmerised by whistling white balls overhead, rushed out on to the frozen pond to retrieve one.  She scampered half way across – where the ice was thinnest – crashed through and was unable to climb out.  In the nick of time, we saw her struggling to keep her head above water and Jim waded out into the freezing cold to haul her out. 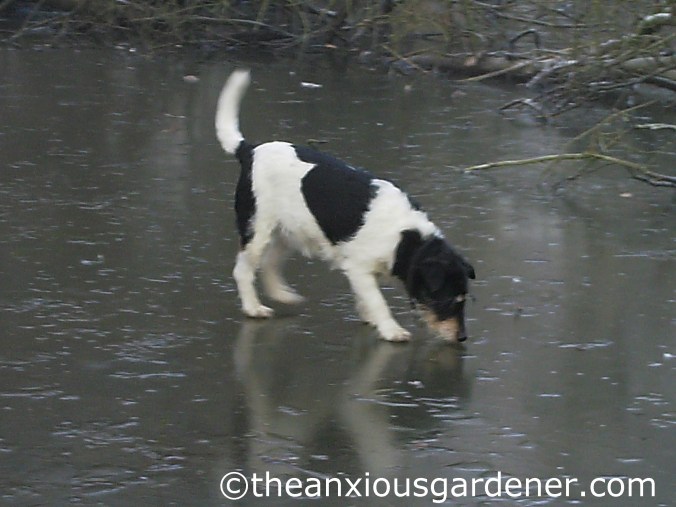 An old ‘phone photo of Solo on the frozen pond

It was a scary episode: especially as it happened so very quickly and right in front of us.  Solo never walked on ice again: indeed she didn’t even swim again.  Right below our noses, she almost drowned that day.  So yes, I understand the dangers open water present.  And I sympathise with the family who bought our cottage above The Priory.  I was very pleased with two small ponds I made and with the wildlife they attracted.  But the new owners, with two toddlers, immediately filled them in and replaced them with lawn.  I was a little saddened but can’t say I blame them.

Obviously there are times when extra care or action is a no-brainer: wobbly step ladders (a cliché – but, no-brainer or not, I continue to use one); treacherous slippery paths; carelessly cast power cables with no circuit breaker; dead branches ready to fall; etc, etc, etc.  And always when using power tools.

A few weeks ago, a friend of mine fiddled with a mower before first switching it off … and lost the top third of a finger.  About the same time, I strimmed the lawn edges at the Old Forge, whipped up a pebble and smashed a car window (not on purpose).  Expensive for me but better than hitting someone in the face.  Since when, I treat machinery with more care and respect than I did before. 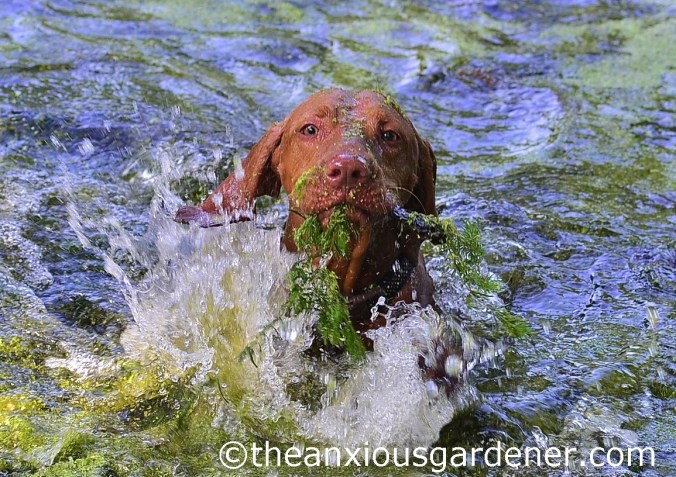 Despite her expression, Toffee the viszla has no fear of water – unlike old Solo

Having alarmed you with all this talk of danger, I should add that in all my years as a working gardener, I haven’t suffered anything worse than a bad back and laceration by thorns … and I’d very much like to keep it that way.

I’ve given just a few examples of gardening peril – I have several more and I’m sure you have scary tales too.  We all make ‘health and safety’ choices based on personal judgement, probability and, I hope, common sense.  Sometimes I get it wrong or something happens which I didn’t or couldn’t foresee.  Life’s like that but I try not to worry about the unknowable.  Otherwise, I wouldn’t step outside my front door … let alone pick up a chainsaw.