Flowers are returning to the Priory … after selfishly leaving me all alone for long dank months.   Still, no hard feelings. 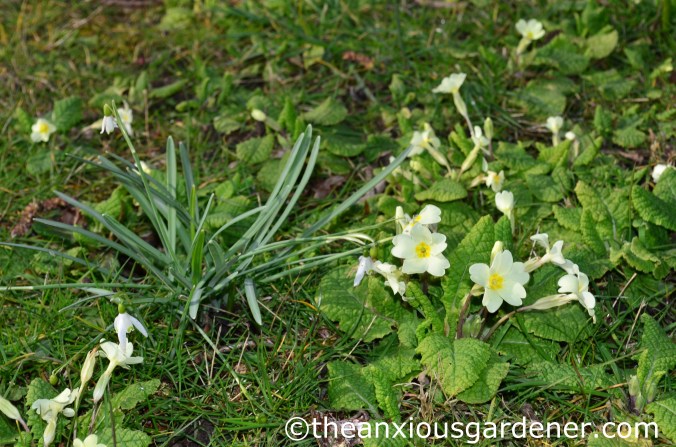 There are cautious whispers and murmurings as my fair-weather friends slowly heave themselves out of bed.

Beneath large oak and ash on the meadow, small pockets of snowdrops have returned.  I did wonder whether they’d bother; having been so rudely spiralled out of their original homes with a bulb planter.   Whilst the results won’t tickle you giddy, I hope that these few flowers are the outriders for a dense carpet.  One day.

On the bank below the greenhouses transplanted groups have re-appeared too. 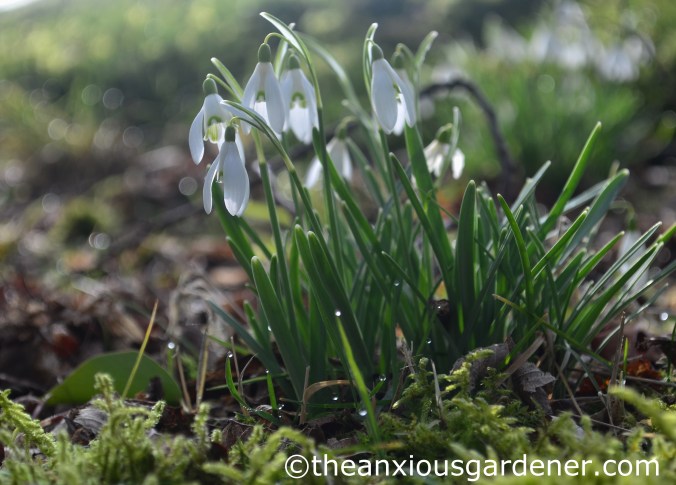 They kept me waiting on this north facing slope and I was beginning to worry that something (voles?) had nibbled the bulbs.  But no, here they are. 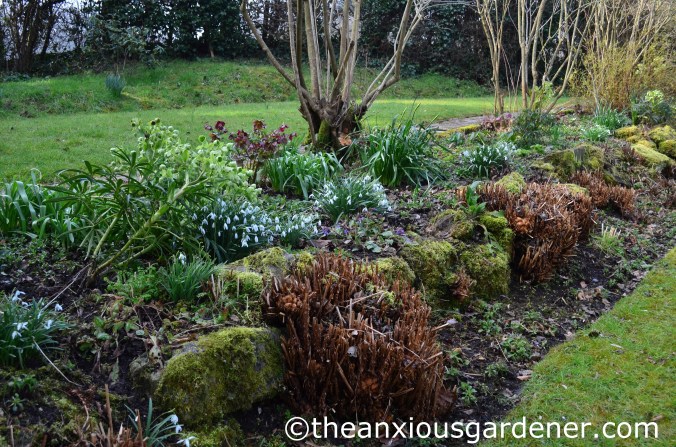 There’s not a lot of crazy flower action in the Rock Border: snowdrops again, a keeled over Helleborus foetidus (need I really stake them?  Surely no-one stakes stinking hellebore, do they?) 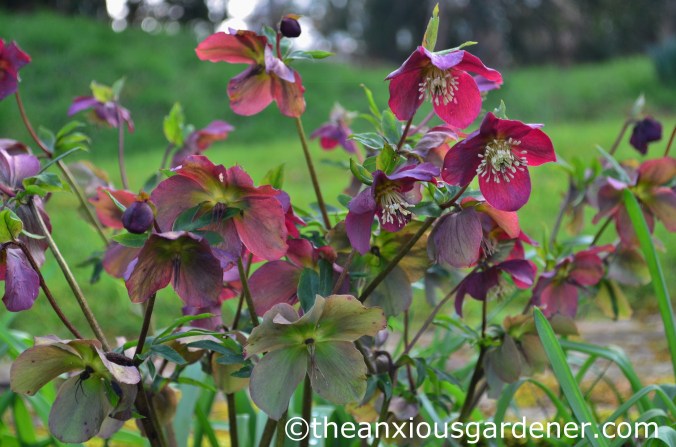 and, just past their prime, a few non-stinking hellebores.  I remember initially not liking these and thinking them funereal.  I was wrong.

Pulmonaria, which I also have in the Rock Border, is new to me.  A couple of years ago, I was given a few dug-ups by my mum-in-law, the font of my gardening knowledge.  I’d seen them on the telly and in books but I didn’t think they seemed particularly lovely and wondered what all the fuss was about.   But heck, if I can be wrong about  hellebores, what do I know?  Having now grown them for a while, I’m sorry to say – I still don’t know what all the fuss is about.  Is that heretical?  I should think so. 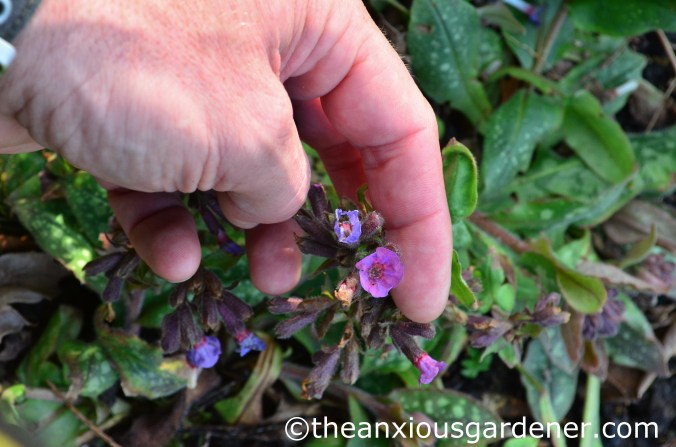 I’m not particularly taken by their wishy-washy flowers (burn him! Burn him!) and mottled leaves.  I shan’t pull them up and stomp them with big boots; it’s not like I hate pulmonaria. 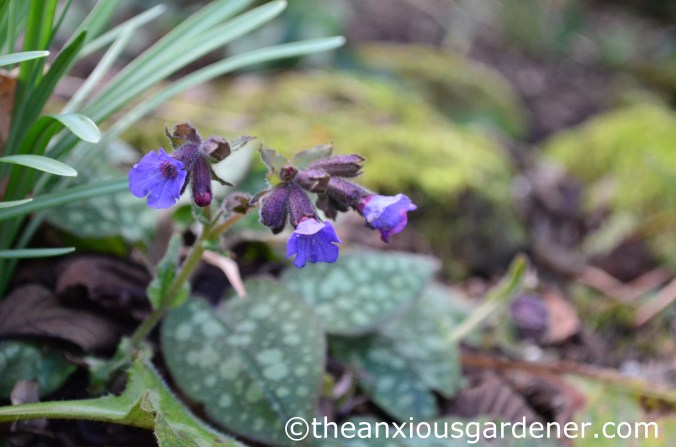 I’m just disappointed that after all the hoo-hah, their beauty doesn’t lift me. 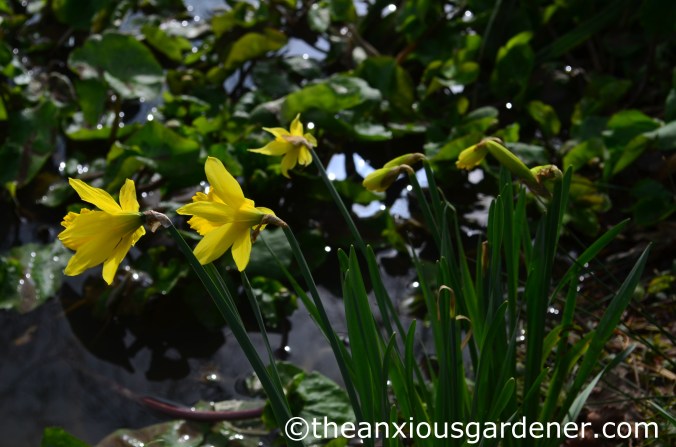 Give me a bright sunny daff any day of the week.  A short-lived pleasure maybe but one whose foliage isn’t in need of ointment.

On a less grumpy note: in the wild, north-eastern corner of the garden sits an old willow stump.  Five years ago, I removed a forest of regrowth but left half a dozen shoots to form a (insert noun here.  A goblet?  Vase?  Cage?  Nonsense?). 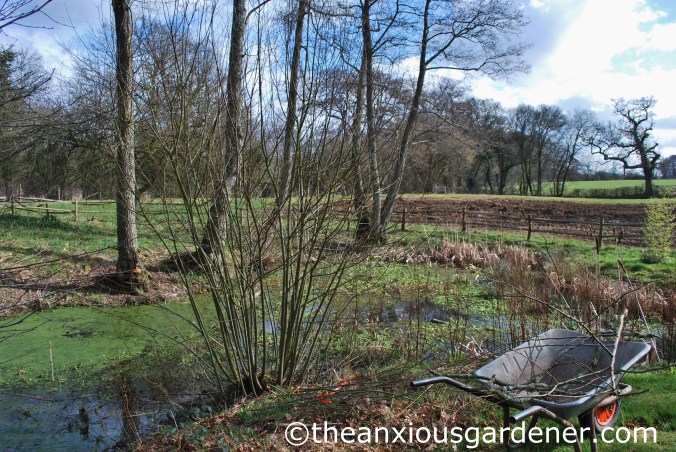 This is what it looked like before I set to.

I pollard the trunks each spring and slowly they thicken and the ends swell.  You might remember that I mentioned it in a very early post – Suckerin’ Succotash.  Personally, I like the effect – though you may not agree.  But there is something about brutal, clenched willow fists, isn’t there?  No?  Ah, just me then. 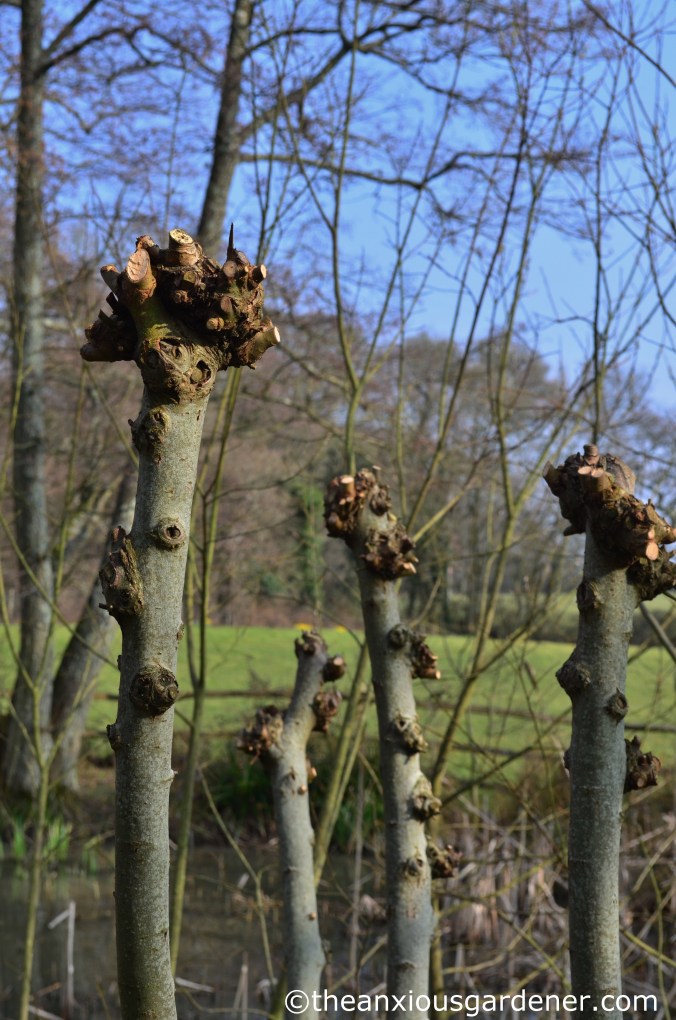 They look like something Bill Sykes might grab for a Saturday night out .  But actually they’ll soon be smothered and softened by pale green shoots and frail leaves.

The alder on the right has a split trunk, declared unsafe by the tree surgeon it is ear-marked for felling

I’m rather taken by alder. This wasn’t a tree I knew very well (prior to Priory) – other than as a water-loving, weed-tree.  I also thought of them as small, like birch, but some of ‘mine’ are nothing of the sort.

They do have the irritating habit of suckering dementedly and removing these takes an age.  But hey, we all have our quirks and foibles. 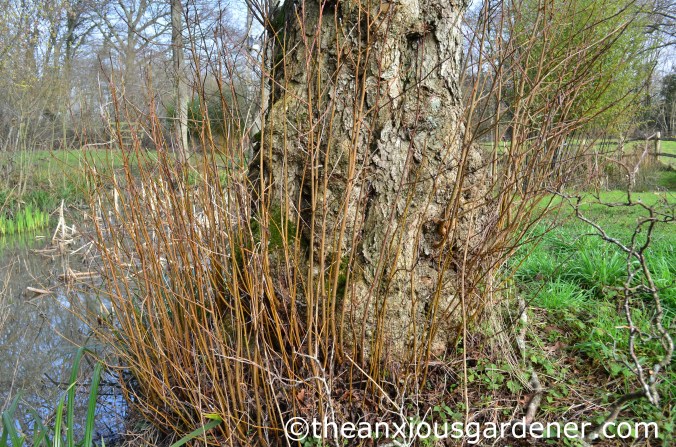 Cutting off the suckers however is a quietly satisfying and absorbing job (whilst listening to Dad’s Army or Round the Horne on Radio 4 Extra) but I take care to avoid an unseemly splash into the pond, as funny as that might be.  I’ve almost come a cropper once or twice. 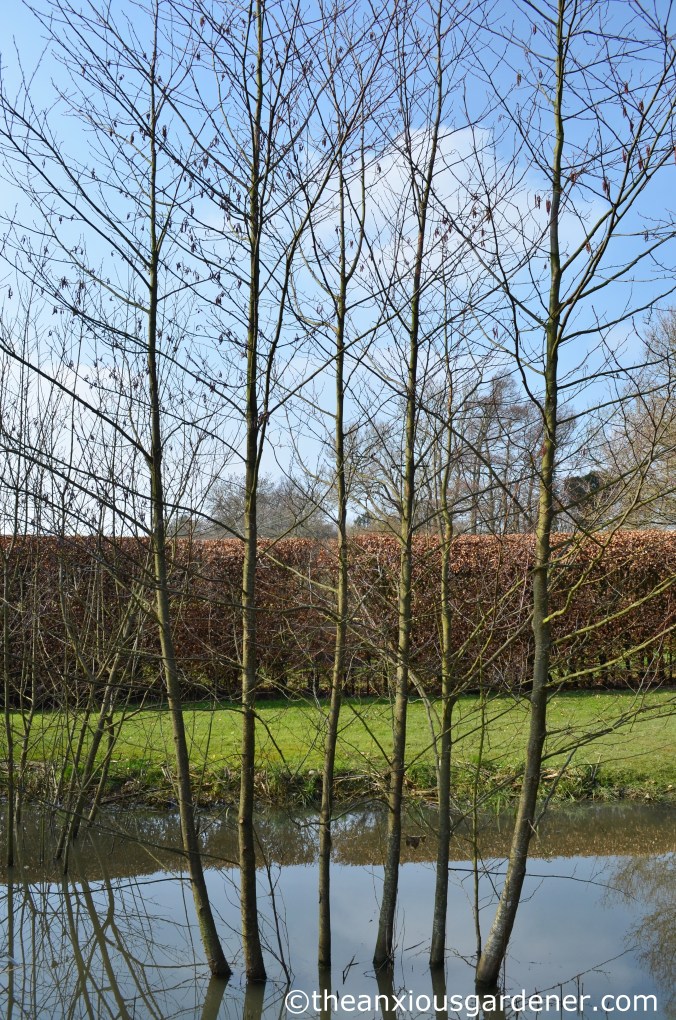 Alder is a rampant suckerer (?) and a rampant self-seeder too.  I’m forever removing wayward (and unloved) offspring but I’ve left a handful be: like this grouping near the west pond, thinned out into a line of six.

There’s also a line of adolescents loitering in the ditch, which I’m mulling over.  I haven’t decided yet whether to pollard these, give them free rein or take them out completely.  I need to press my finger hard against my chin and think. 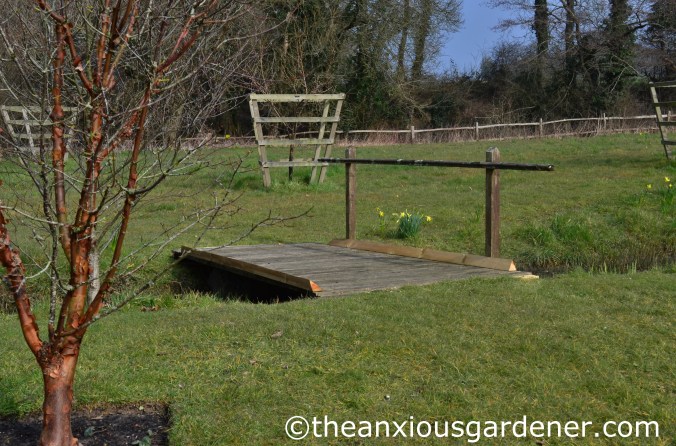 Thanks to Jim, the bridge over to the meadow is reborn.  (I carelessly lost the old one during a recent flood).  We salvaged most of the timber from the original, triumphantly found a couple of steel girders in an outbuilding and Jim bedded them in concrete.  A biblical flood might shift the thing but if we suffer one of those, the loss of a garden bridge is of small concern. 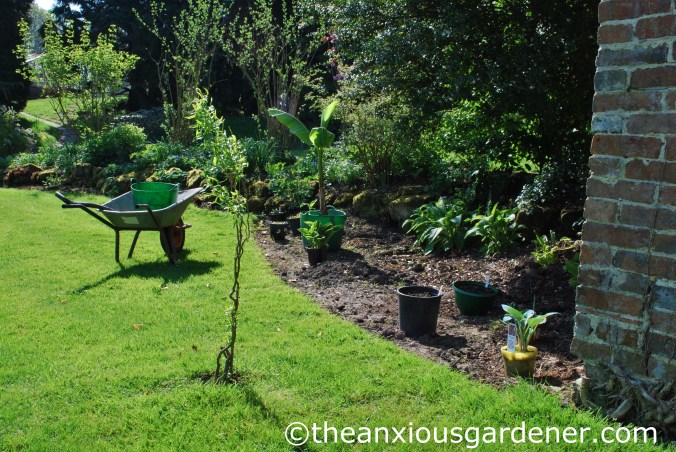 Anyway, let’s return to where your heart is – pollarding.  I’m planning on doing just that to one of  my twisted willows.  Wasn’t it a sweet, little sapling in 2011?

Now look at it.  The beast.  Its grown so quickly – like Jack’s beanstalk.  I’ll defer pollarding for another year as I’d like to see how big it’ll reach during another season.  If you want a really, really fast growing tree for a damp area, Salix tortuosa is your boy.  And he grows big – over 12 metres – hence my intention to start pollarding.

(Eggs, grandmother time.  Pollarding is the ancient practice of lopping a tree’s upper branches or trunk at head height.  The tree – usually hazel, ash or beech – responds with a frantic, panicked surge of regrowth which is harvested for fodder or, if left for several years, cut as poles for whatever you might need a pole for: fences, hurdles, fighting Robin Hood on a bridge, that sort of thing.  Because the pollarded tree doesn’t reach maturity they can live far longer than their uncut brethren.  Coppicing is similar but the tree is cut down to ground level; pollarding puts the new shoots out of the reach of cattle and naughty deer.  It is still widely used but usually to limit tree size, as I do, rather than to produce a tasty snack for your cow.  Grandma, egg, sucking time over).

The twisted willow started life as a handful of twigs cut from a neighbour’s tree (I asked first).  Isn’t that an amazing zest for life?  From a twig to this in about six years?  I think so.  I wound the twigs into a spiral but it didn’t really work.  Fun to experiment but I’d suggest a single twig will produce a more elegant form.

Last month, I mulched and fed my twenty-odd clematis.  I wouldn’t normally do so in February but with the very mild winter they’ve been terribly confused, poor dears, and have barely stopped growing.  I thought they could benefit with an early feed.  This C. ‘Huldine’ is relatively sheltered growing up through a cedar and is miraculously untouched by frost

but others have been shrivelled.  Silly clematis.  They carry on shooting prematurely and repeatedly like it’s April.

That zest for life is a wonderful, powerful urge.

Those of you who are far too busy (and sensible) to engage with social media, possibly missed a Sunday Telegraph article – The Gardening Bloggers You Should Be Following.  It listed sterling blogs and The Anxious Gardener got a nod too.  I hesitate to mention it as I’m still uncomfortable with self-publicising.  But, I have learnt and certainly been told, that if you don’t tootle your own bugle no-one will tootle it for you.  (Er, possibly for payment they would).  It’s been a curious few days with my normally mundane viewing figures rocketing.  Very odd.  I haven’t featured in a national newspaper before and, as I probably won’t again, I thought I should tootle.

Yours, a sensitive soul.  Apparently.

61 thoughts on “Pollarding And The Zest For Life”