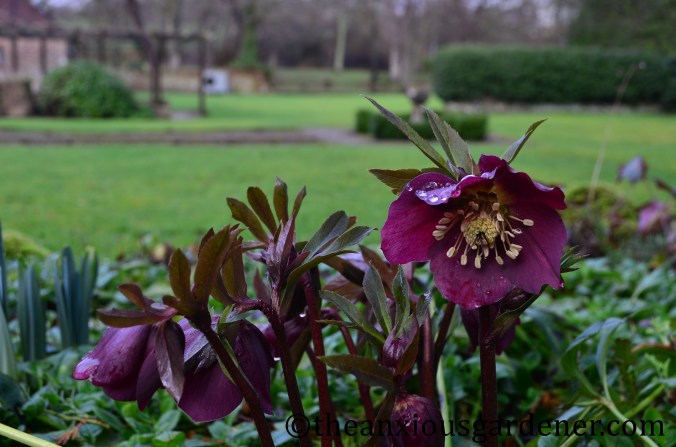 Or at least, I’ve been gardening as much as I possibly can.

A new pond on the west lawn

When it has been dry enough, I’ve cut back various beds and 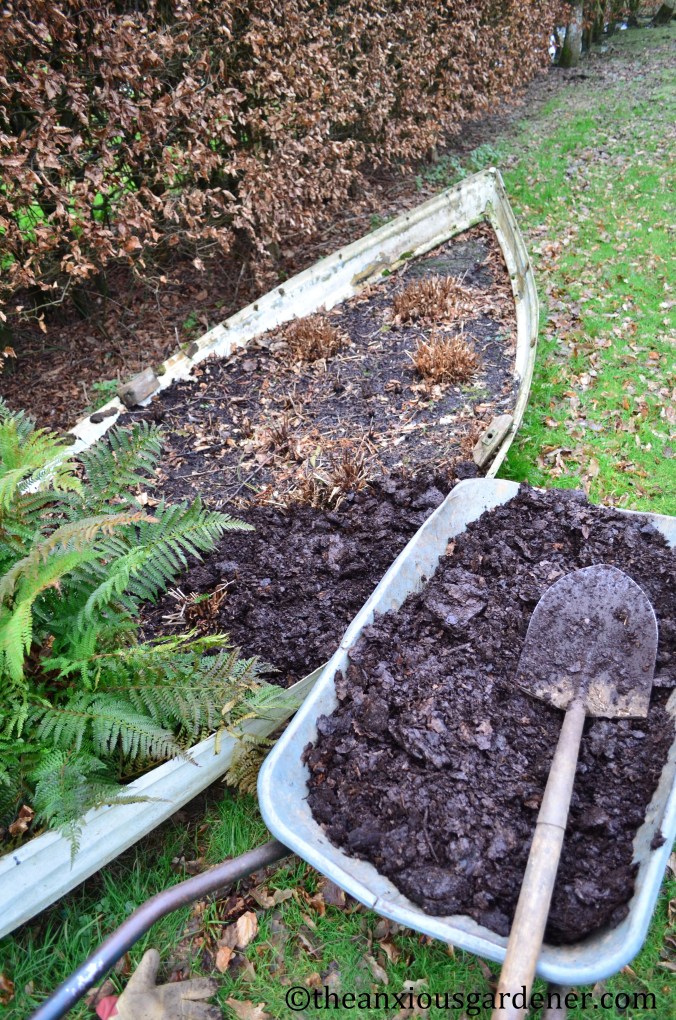 mulched with my rather lovely, two-year old leaf mould.  Tucked behind the beech hedge is an old boat which I’ve planted up with ferns.  I apply a thick layer of mould each year and even though it has no drainage holes, they seem to thrive.  Actually they do so well that the boat serves as a fern nursery – producing offspring for use elsewhere in the garden. 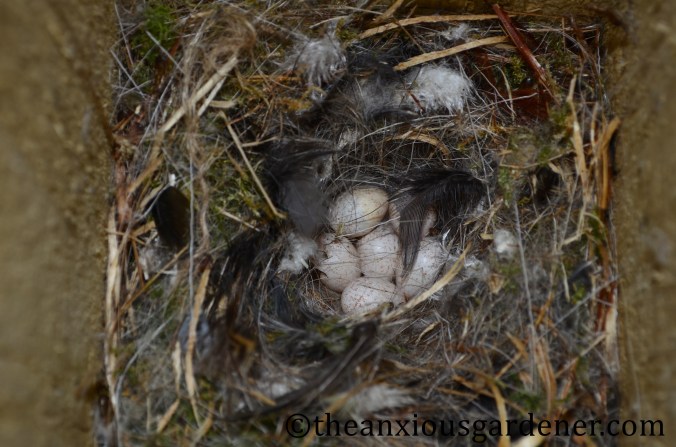 I’ve had ample time to check and clean out the nest boxes.  This one held a perfect, abandoned nest and half a dozen eggs.  I don’t know why the parents (blue tits, I think) deserted … perhaps because a holding screw was missing and the box a little wobbly.  About 60% for my ‘boxes were used which is my usual take-up rate.

When the weather has been truly appalling (most days), I’ve sometimes been under cover making new ‘boxes. 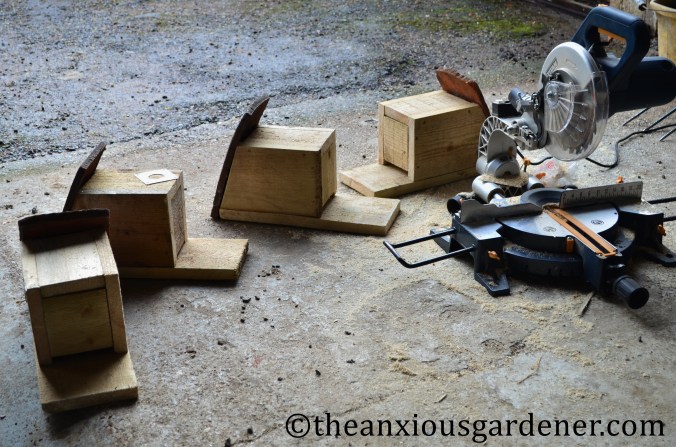 With a mitre saw, some planking off-cuts and a stack of roof tiles, I can churn them out easily enough.  Hmm … there might be a fundamental design flaw with these particular ones.

With that design issue addressed, I’ve put the new ‘boxes up in the gardens.  This one is on a weeping willow on the west pond.  There are now thirteen of this design (plus two robin/fly-catcher boxes and one for tawny owls). 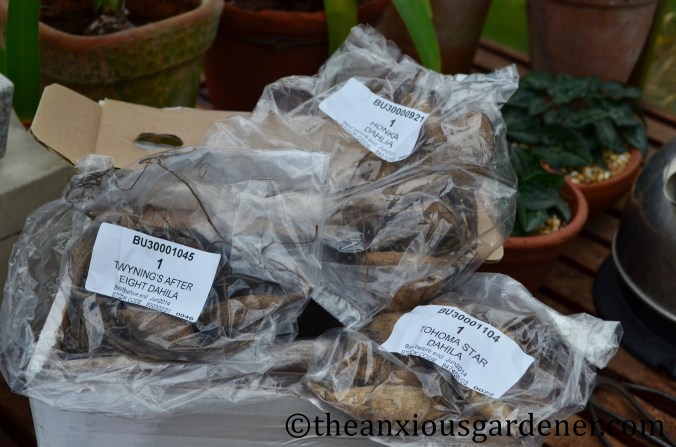 Bad weather time is also shopping time.  I’ve ordered lots of plants including these dahlias: I’ve wanted Dahlia ‘Twyning’s After Eight’ for a while.  I’ve also ordered – and am feverishly waiting for – a large order of tropical plants for a new border. 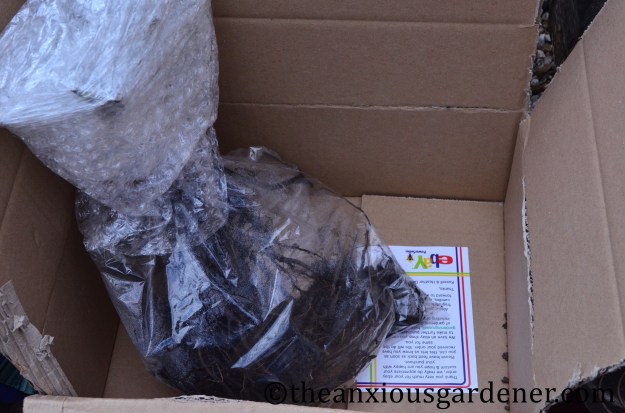 Don’t you just love a photo of a cellophane wrapped plant sitting in a cardboard box?

Three bare-root Rosa ‘Sander’s White Rambler’ have arrived.  They will go into gaps in the rose tunnel.

I’ve potted up various plants too including these pretty little violas (they look sad, wet and bedraggled), 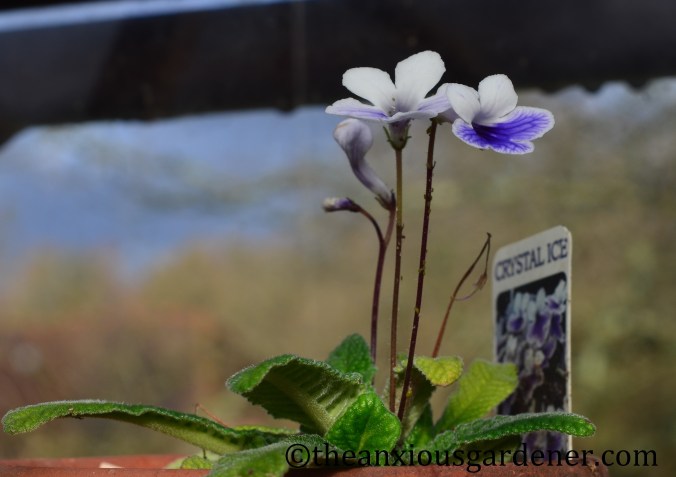 and this spare bamboo (it looks sad and lonely).  I saw this idea of planting up an old water tank in the garden of a rather nice restaurant recently and had no hesitation whatsoever in nicking the idea.  The bamboo will fill the tank in time, I suppose.

So here is my new holding bed.  It needs a little more work yet – two more boards and some soil for a start.  But soon it will be a fine new holding bed and I shall be happy.

I wanted to part-screen the greenhouses and so last April I dug a new bed and mulched it. 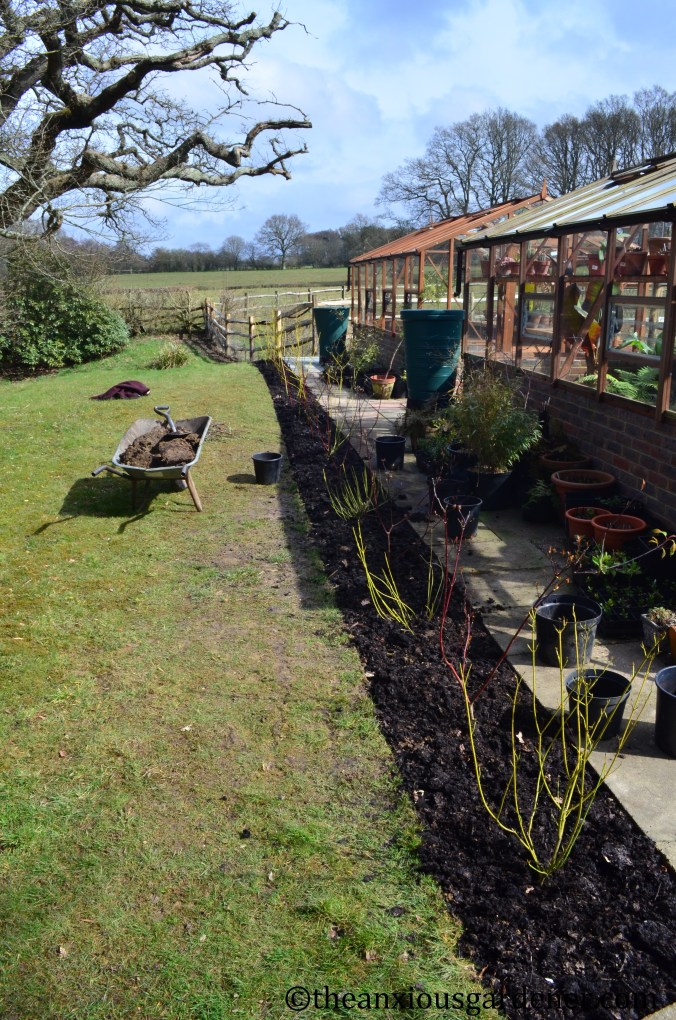 Then I planted a long line of alternate green and dark red-barked dogwoods.  I saw this done in a Gloucestershire garden and the established leafless hedge, lit by mid-winter sunlight, was striking and quite handsome.  But now that I’ve done the deed, I’m unsure.  It may look a little er, naff?

I used half a dozen dogwoods which I had knocking about the place (as you do) and for the rest simply pushed in the spring prunings from established plants.  Conventional wisdom told me it was too late in the year for cornus cuttings to take but do you know what?  After all that hard work and initial doubt … my cuttings were a complete and abject failure.  Utter rubbish.  Out of about 30 cuttings only one took.  Oh, well – worth a try.

I really want the hedge to get under way this coming year and so last week, I abandoned the cuttings plan and bought three more dark dogwoods (Cornus alba ‘Kesselringii’ ).  Then I rummaged about the garden and came up with some more spares.

I dug this one up with an accompanying carpet of snowdrops – which I have split off and dotted along the bed. 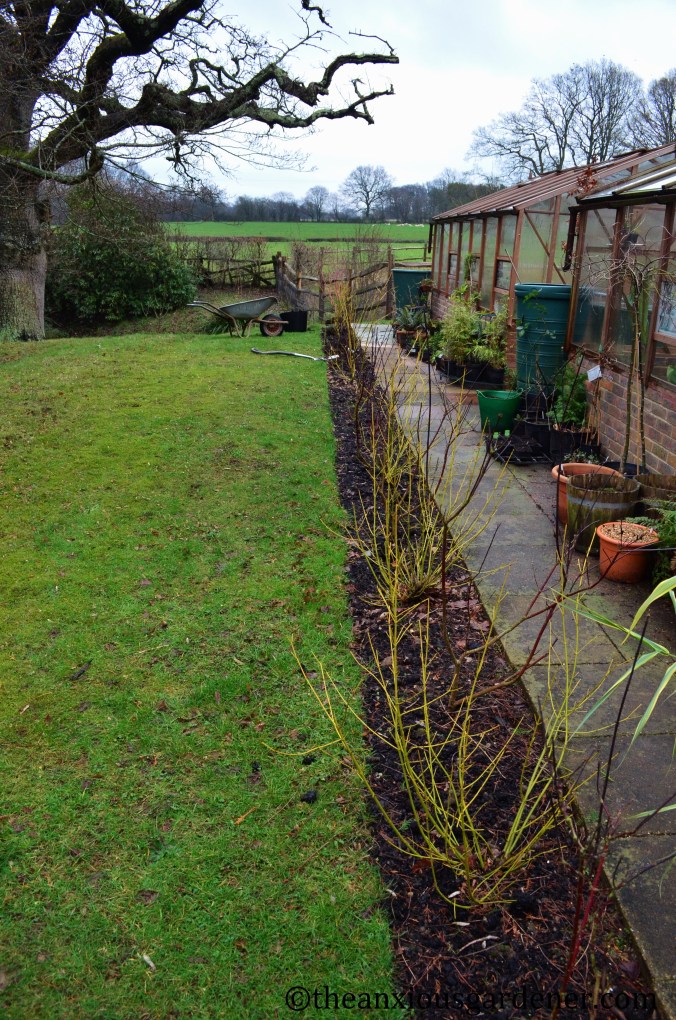 Job done.  Now I’ll sit back, wait a couple of years and see just how naff it looks.  Or not.

Thanks to everyone who entered the Charles Dowding’s Veg Journal competition.  There were loads of entries – far more than I was expecting.

And the winner was … Ros Forge.  Congratulations!