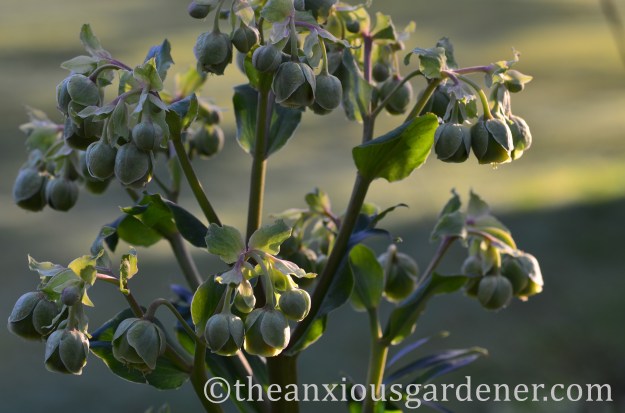 There has been little sign of life at the Priory recently; other than me that is (a surly and dishevelled figure, crouched beneath a dripping conifer and shaking a fist at the rain-laden clouds). 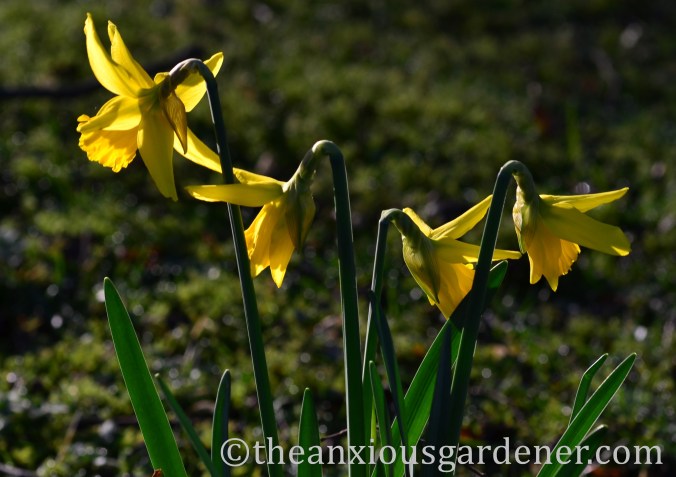 And then the most extraordinary thing happened.  The ‘February Gold’ daffs I planted in 2008 flowered.  IN FEBRUARY! 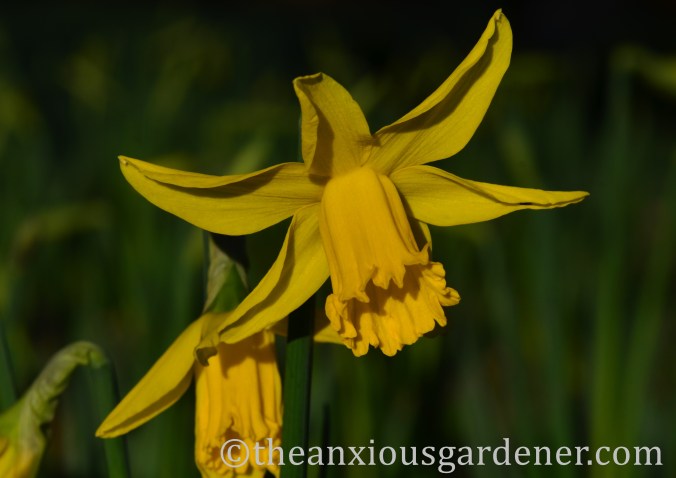 In the past they’ve always kept me waiting until March.  Always.  How very pleasing that they have finally done as they should. 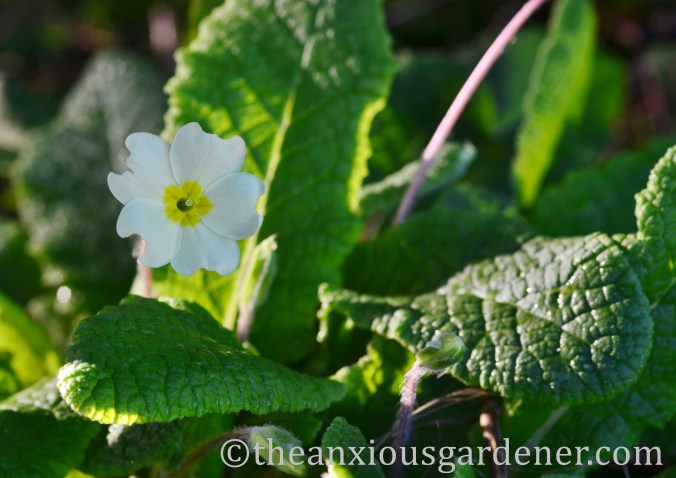 On a rare sunny morning even a slightly nibbled primrose was gloriously perfect. 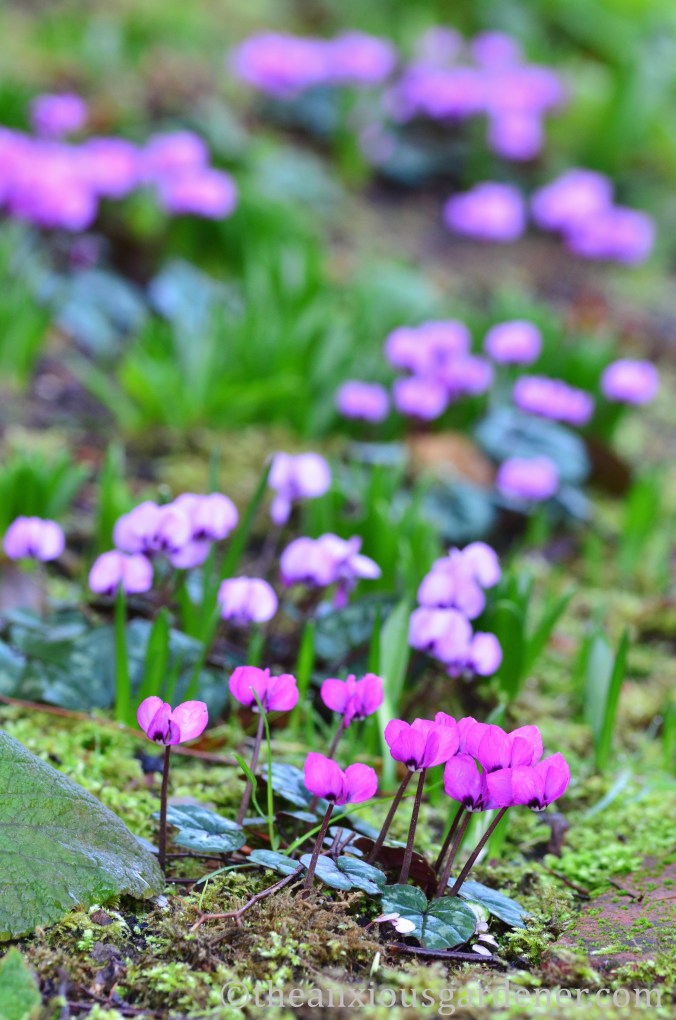 There were no cyclamen when I started work at the Priory – which for an old, established garden I thought odd and remiss. 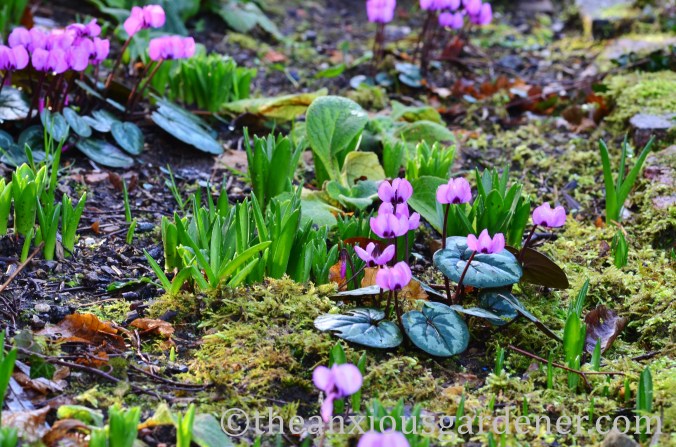 I have since planted a few dozen C. coum and they have flourished.  Gosh, but I’m pleased that I did. 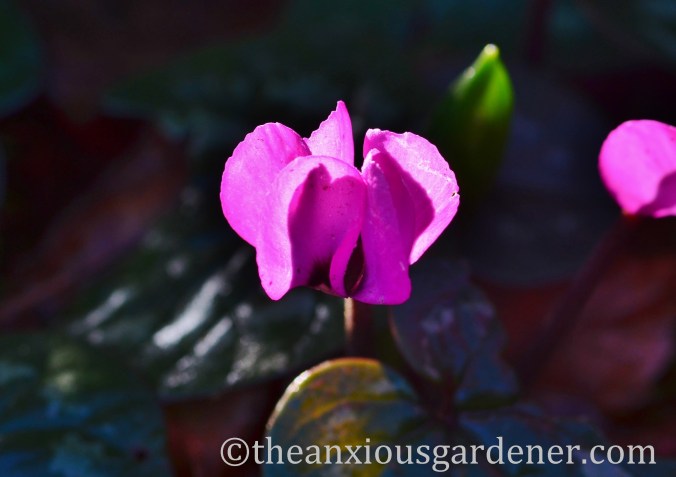 If only for when the low winter sun ignites them. 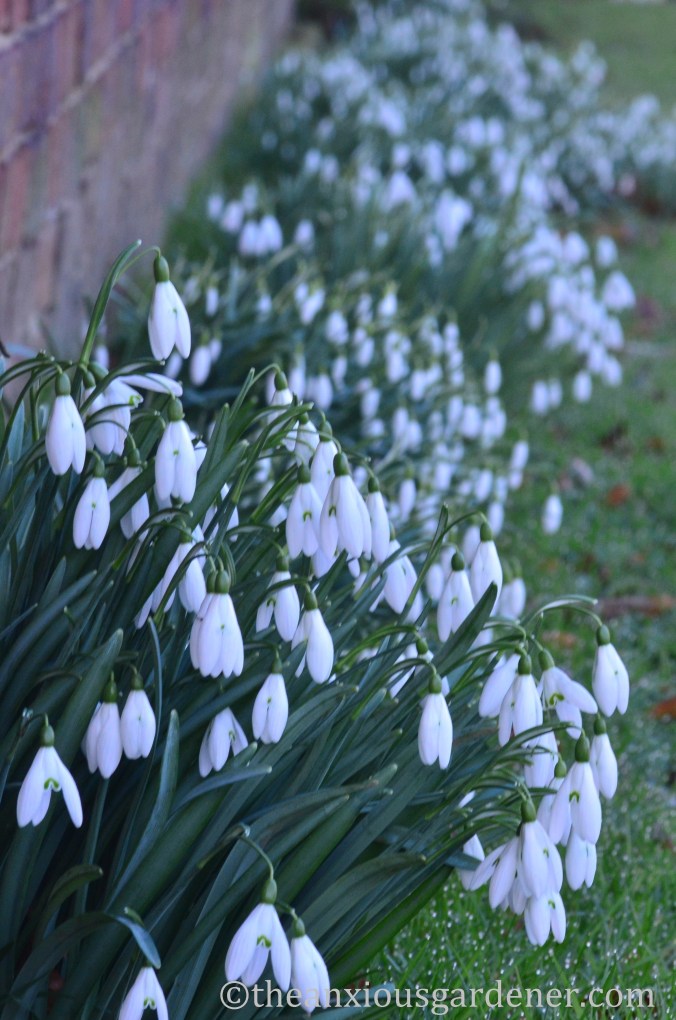 The Priory did boast some snowdrops (before me) but not very many.  I have added more to this long, extended clump along the base of an outbuilding. 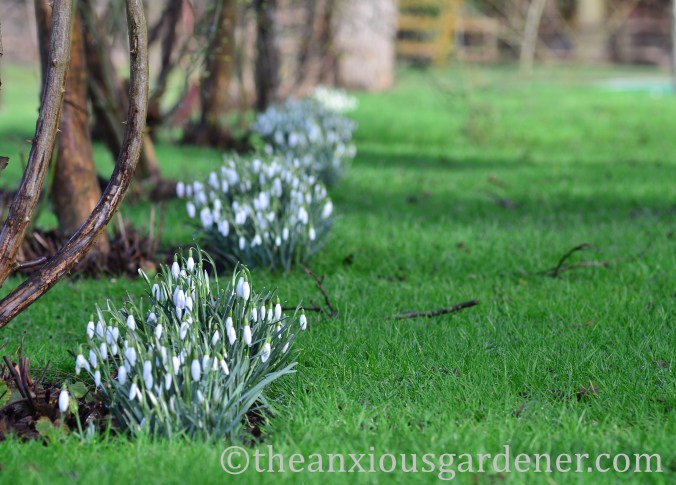 And also used them in planting squares under the rose tunnel. 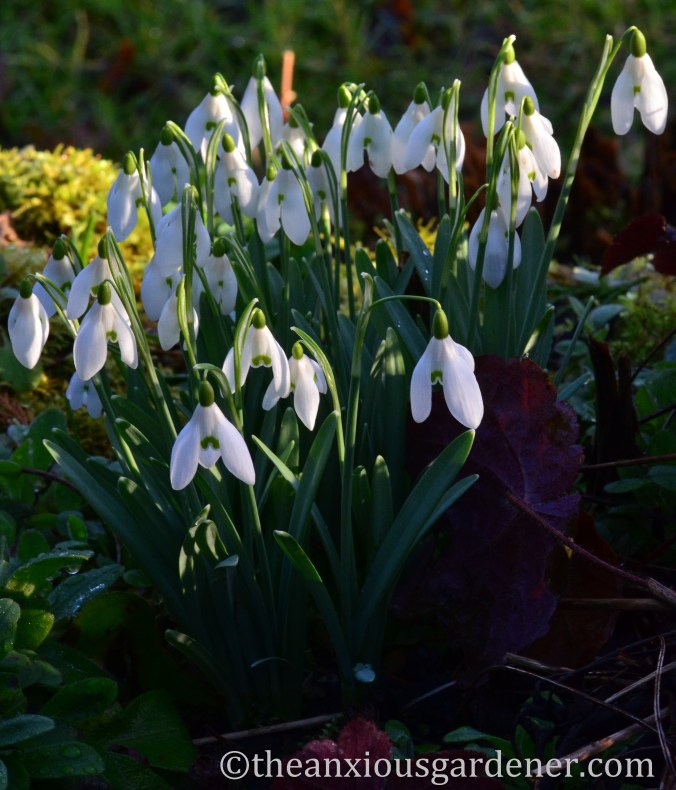 A couple of years ago a friend gave me a big trug-bucket full of snowdrops-in-the-green.  There were so many I could barely lift it.  What a precious, generous gift and I spent a happy day or two of profligate planting. 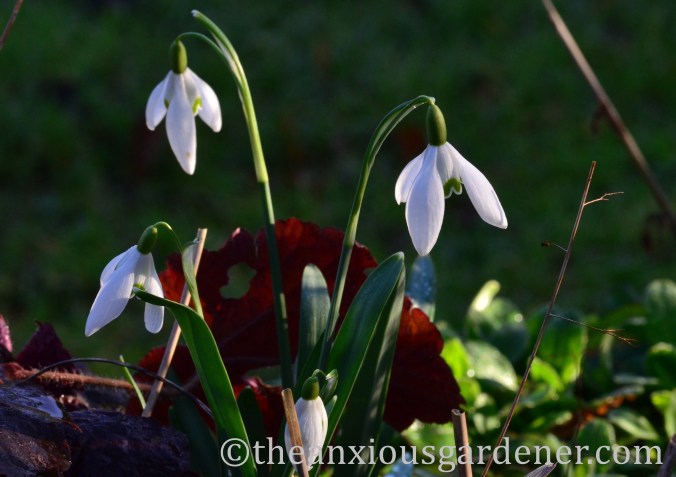 I have introduced them to the meadow and I am hoping one day for a white, galanthus carpet beneath the ash and oak. 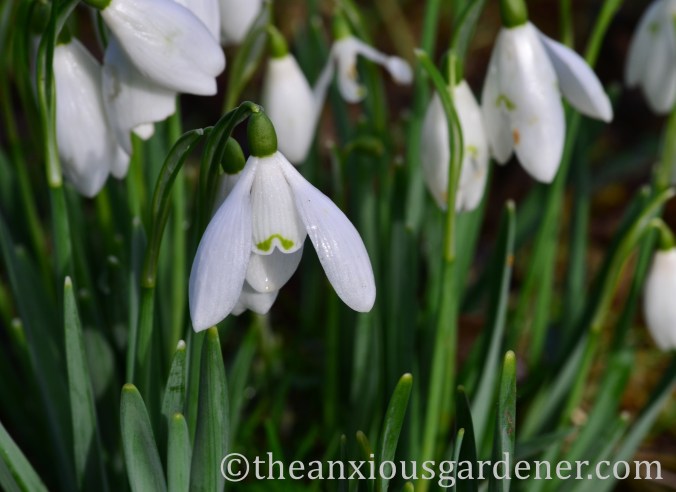 Won’t that be a picture? 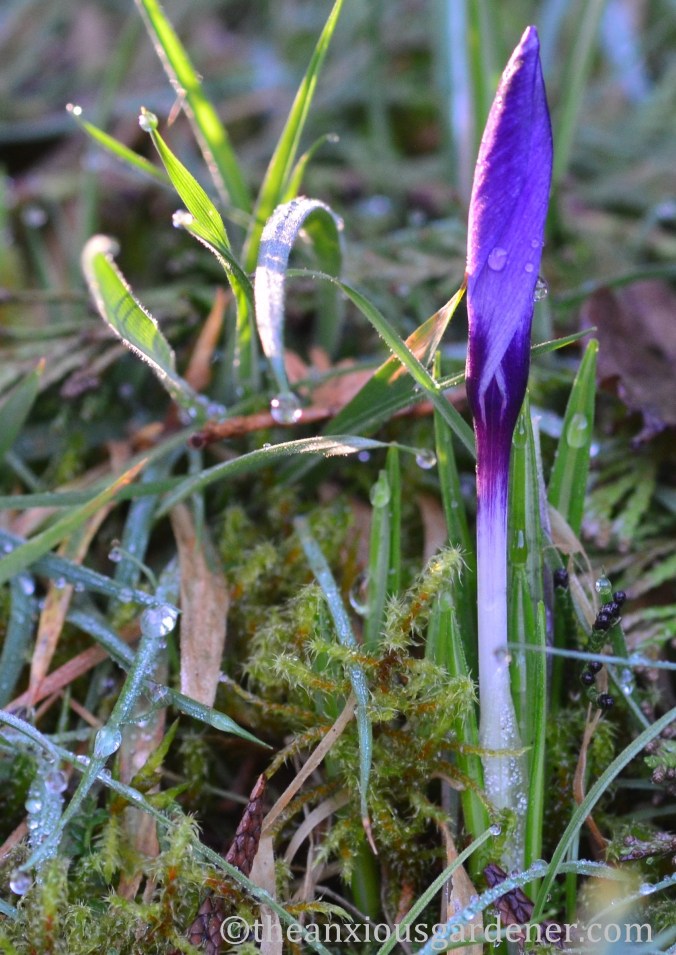 Some crocuses are up – this is C. tommasinianus ‘Ruby Giant.’   It isn’t really a giant and it isn’t ruby at all.  Plant naming isn’t what it was. 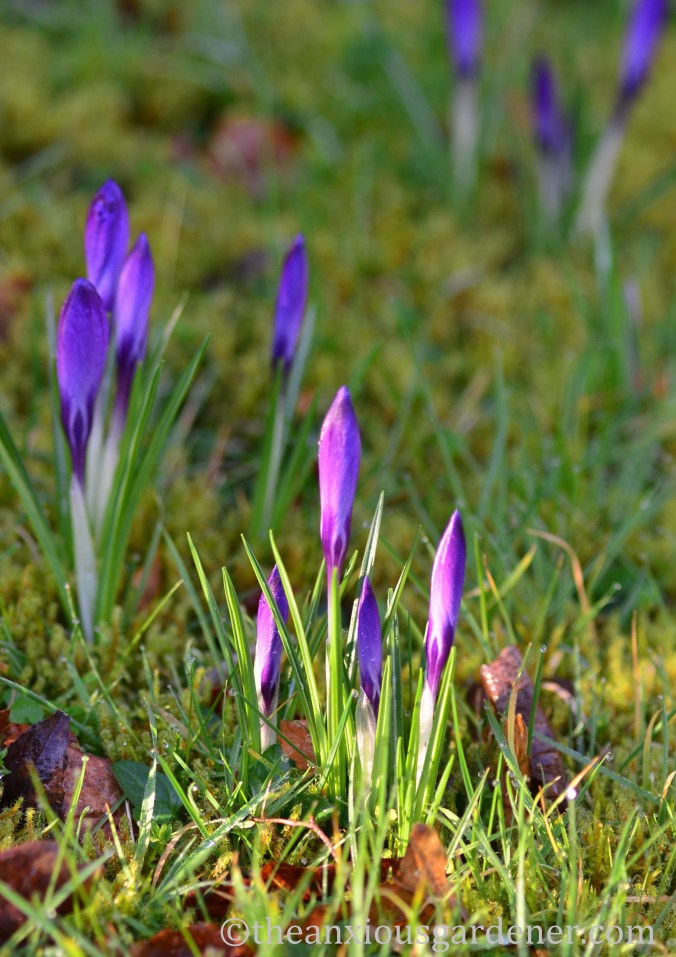 But they are rather lovely nonetheless.  They spread slowly: the four flowers in the foreground have come from one bulb planted just over three years ago. 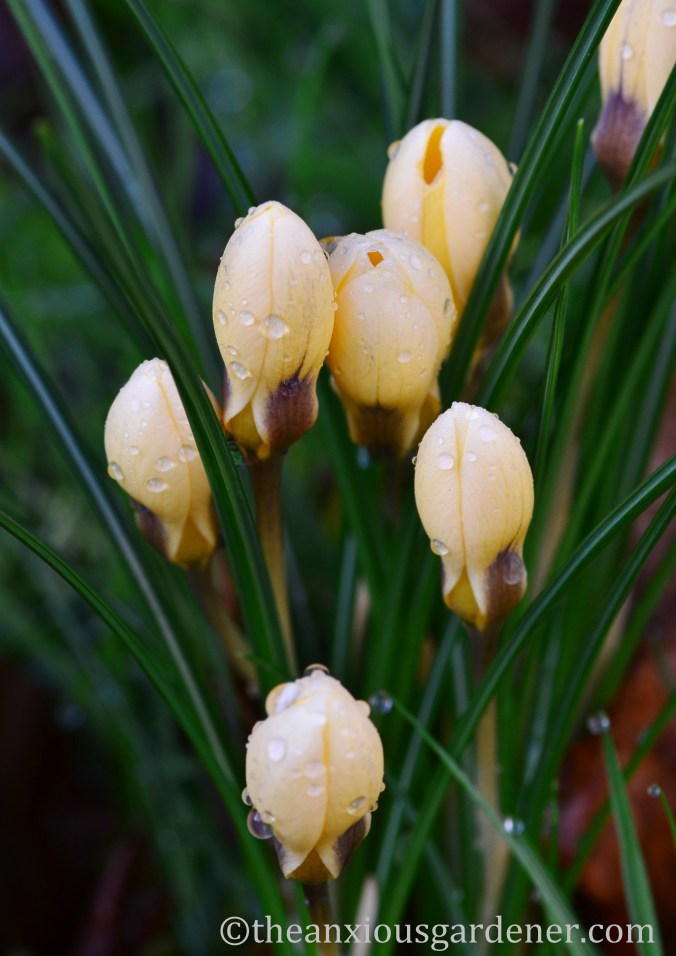 These are C. ‘Romance.’  (I forgot to go back and take a photo after the sun opened the petals.  Sorry). 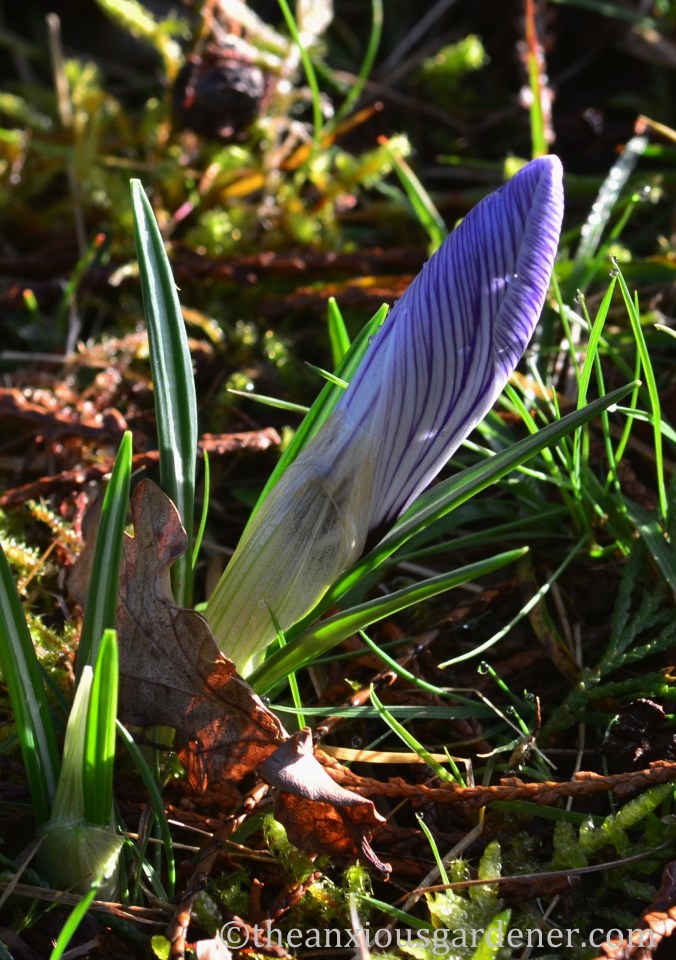 Here is a crocus which I have written of before and it remains a favourite.  Throbbing with pent-up intent this is C. ‘Pickwick.’ 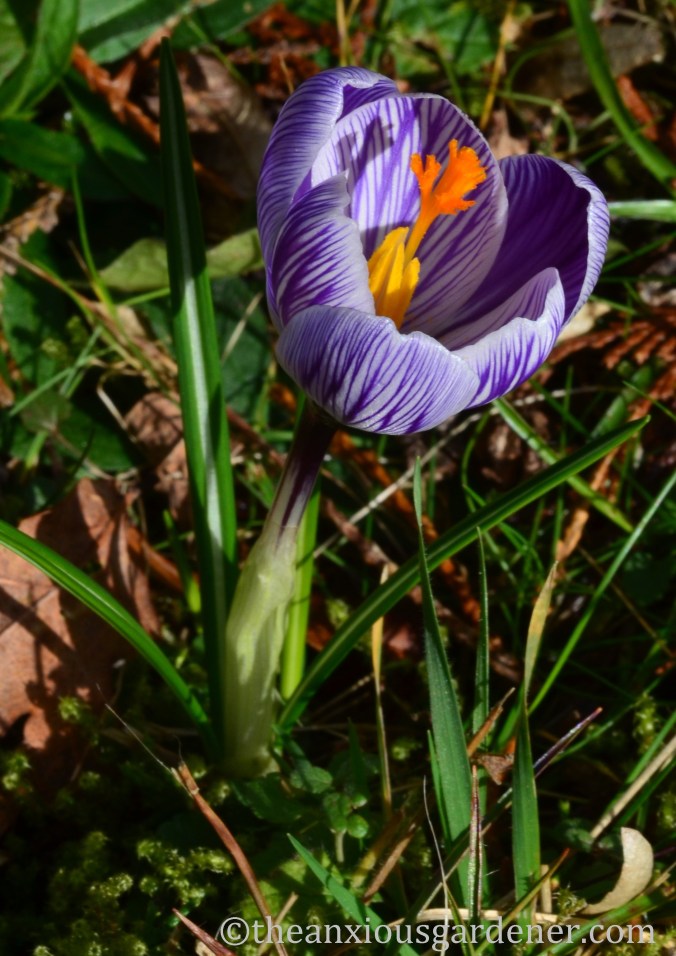 And ta-daah, it opens.  What a beauty; what a show-off. 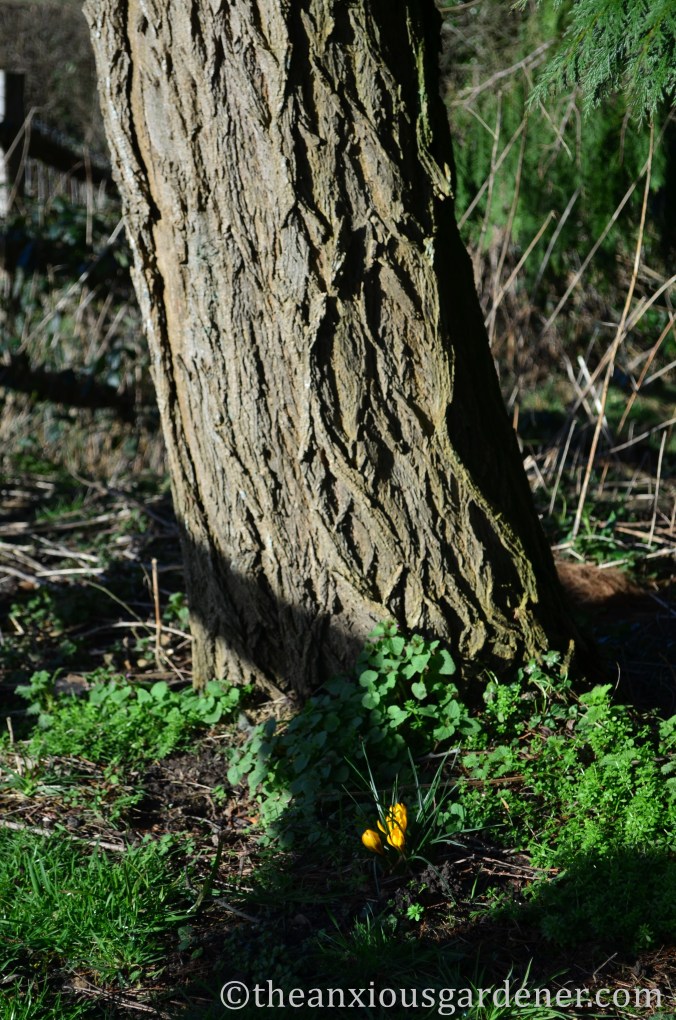 As with cyclamen, so with crocuses: there were none at the Priory.  Or so I thought.  A couple of days ago at the base of a Robinia pseudoacacia a splash of yellow caught my eye. 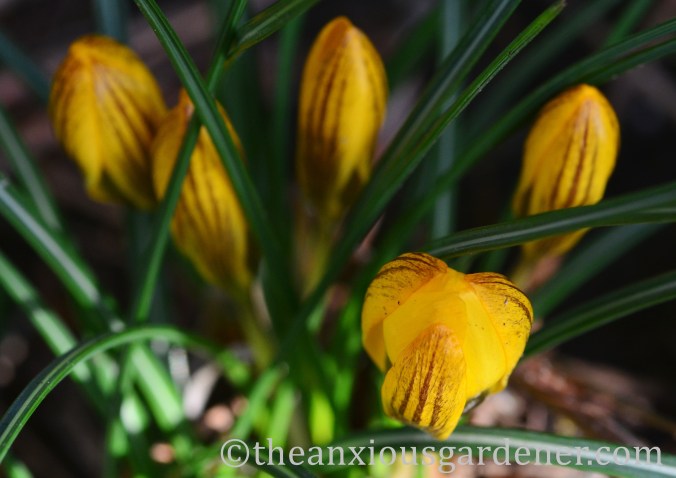 I don’t know the variety as I certainly didn’t plant them and I’m pretty sure they haven’t appeared before.  Have they?  I suppose, on reflection, they must have; crocuses don’t just transmute from grass or nettle.  Do they?  Very odd, very baffling.  (A gold star to Stacy who has suggested this crocus might be C. chrysanthus ‘Gypsy Girl.’  Certainly looks like it). 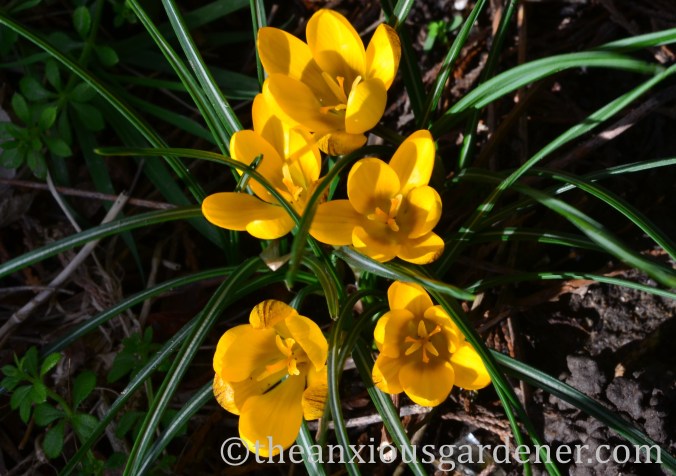 But I am jolly pleased that they have arrived from where ever it is they came from. 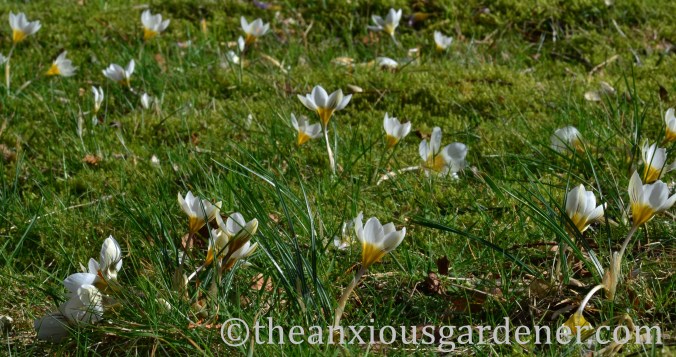 A variety that I did plant is C. Snowbunting. 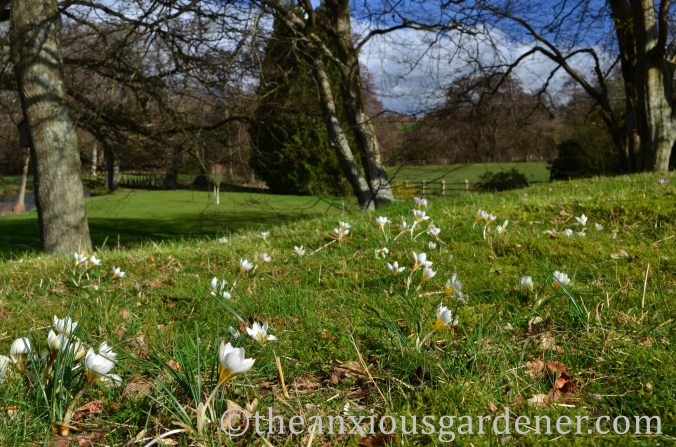 On rough grass by the greenhouses and above the rest of the garden, Snowbunting and Pickwick are the first of several varieties to appear.  C. ancyrensis ‘Golden Bunch,’ C. chrysanthus ‘Prince Claus’ and C. sieberi ‘Firefly’ are all still to come.

I’m trembling with the excitement of all that expectation, aren’t you?  Hold onto your hat – the garden is under way.

(The front of my jumper and elbows got very wet as I lay down on dewy grass to get this last photo.  Just saying).

54 thoughts on “A February Springtime”